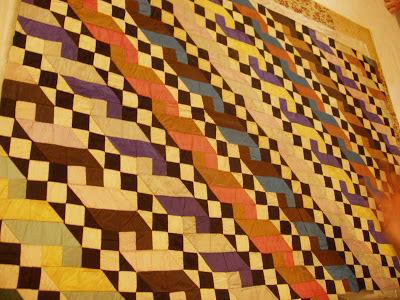 As well as the beautiful wholecloths Elen showed us during our behind the scenes tour, there were several patchworks.  I thought I recognised this 1870s ribbon patchwork from a book - it's on page 74 of Janet Rae's 'Quilts of the British Isles', which is where I remembered seeing it, and on the back of 'Quilts' by Christine Stevens (the little square book with the purplish cover published by the museum in 1993 - thanks for that info Val!)  The silks still look remarkably fresh.  Janet Rae included it in a section where she shows parallels between English paper pieced silk patchworks and the parquetry tiles often used in Victorian houses.  Some of the colours must have faded, because the twisting pattern is much more sharply defined in some areas than others.  Although it looks very complicated, it could be adapted for piecing in strips by machine... Like many of these intricate silk patchworks, it isn't quilted.

Three other patchworks featured hexagons, in various sizes.  Once again, this piece isn't quilted.  There is a collection of hexagon rosettes and various small pieces made from diamonds, including a snazzy zigzag border on two sides.  They are all appliqued to a very neatly hemmed cloth (linen?)  I wondered if this could be a two person project, as it has the feeling of the kind of thing you might make if given bag of unfinished hexagon rosettes and tacked diamonds.  There seems to be a piece missing from the centre applique too, which also made me ponder about this feeling of 'leftovers' the piece seems to have.  That's all pure guesswork of course, but it would make a rather good way to use up a series of hexagon rosettes (often projects that get started but not finished!)  It is a treasure trove of Victorian cotton prints. 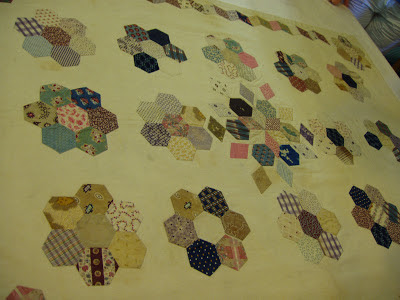 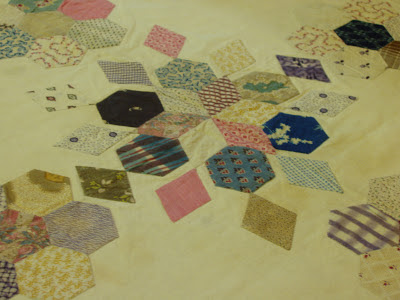 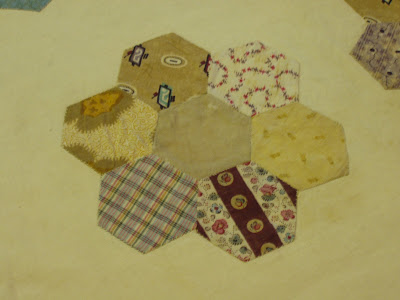 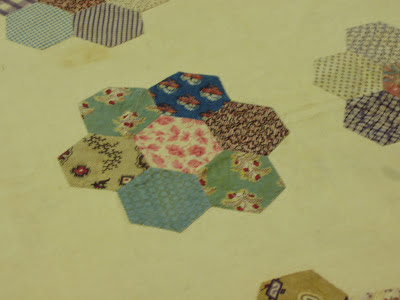 The maker of this patchwork clearly wasn't daunted by handsewing thousands of hexagons...  They are approx. 1/2in sides, so there's even more fabric folded under each one in the seam allowances than there are on top.  I think Val asked the question about whether this patchwork could have been used to repair or recover an earlier wholecloth quilt, but at the edges you can see that the quilting pattern goes through the hexagons and continues into the patchwork section, so that can't be the case (see the lower photo).  It must have been fairly hard sewing, with all the hexagon seam allowances underneath.  There are photos showing the quilting on this piece in my previous post.  The amazing patchwork makes this a very special quilt, perhaps another one that could inspire a tribute piece? - perhaps not with such small hexagons!  The Turkey reds have stayed wonderfully vivid, but it looks like some of the prints may have faded considerably, as there is quite a jump in value in the greenish hexagon frame (just outside the larger central frame), and it looks like the same fabric in the second frame from the centre, now reading as an ochreish yellow.  As the hexagon pattern is planned out very carefully, I'm sure this sudden change in colour isn't how it was made.  The quilting is in white (now off-white) thread, something seen on a lot of nineteenth century quilts.  I'm going for a similar effect with my red and brown quilt, using a Wonderfil #12 that shades from cream to beige - more about that in future. 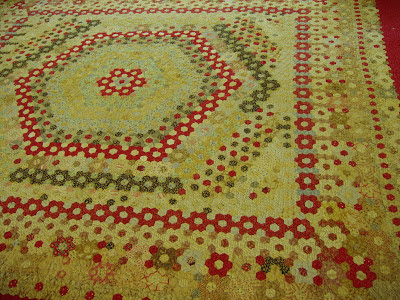 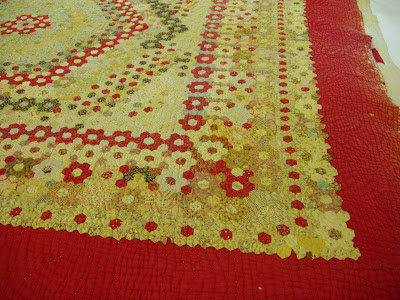 These hexagons are larger - they would have been about 1in before the quilt wadding shrank, which has given the quilt a similar effect to Suffolk puffs (yo yos).  The shrinkage certainly gave it a very interesting, textured and rather cuddly look to it.  I wonder if any of the quilters will be planning to deliberately shrink a finished piece for a similar look :-) 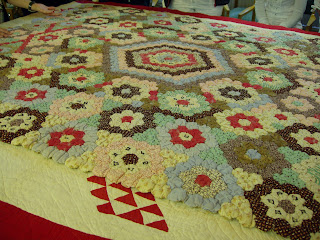 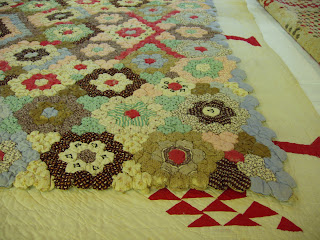 The final quilt we saw before going through into the main museum storage area was a tailor's sample quilt.  It is two layers, quilted quite simply (again with white thread) and was made, as the name of this kind of quilt suggests, from tailor's fabric samples, hence the size of the pieces.  I find these quilts very appealing (if much heavier than we would want to use today) and recently made a quilt top inspired by several different tailors' quilts, including one in the Quilt Museum's collection and one illustrated on page 28 of Mary Jenkins and Clare Claridge's 'Welsh Quilts'.  Mine is made from batiks, so it has a similarly low value contrast between the fabrics, with an overall 'grunge' colour look to it.  I want to make another using Japanese taupe wovens, brushed cotton plaids etc. Some of the pieces in these wool quilts are surprisingly bright though, such as those blues and the red piece towards the top left - they're not all browns and greys.  The back is also made from samples, this time including some longer strips in the centre. 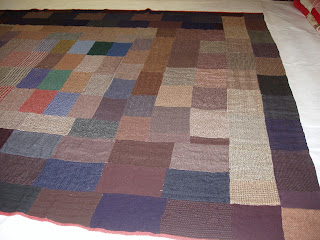 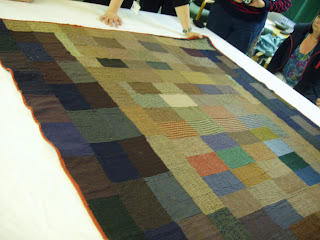 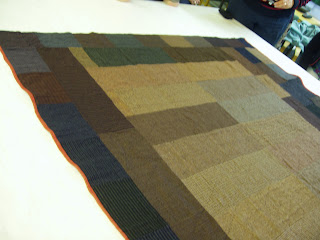 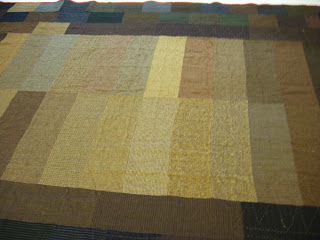 Later on, we stopped at the tailor's shop in the village, where we saw these kind of sample books hanging up and on the counter.  There were also a lot of garments made from these kinds of wools.  It made a neat link back to the quilt and helps to put the fabrics into context. 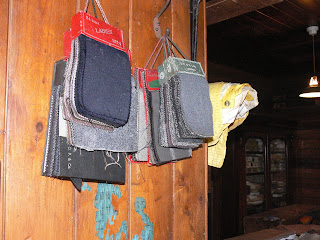 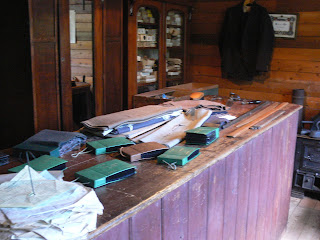 The highlight of the quilts tour was something I didn't know we'd be able to see - the inlaid patchwork picture panel made by James Williams of Wrexham in 1842.  There's more information about it here, including a photo of the complete piece.  It was shown, along with John Monro's 'The Royal Clothograph', at the V & A's 'Quilts 1700 - 2010' exhibition three years ago. 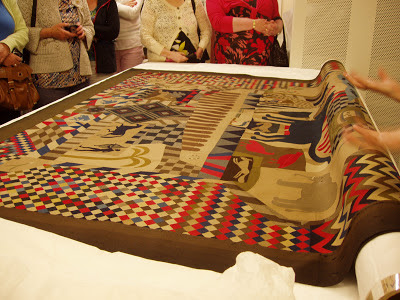 Ever since I saw pictures of these 'inlaid patchworks' I have been intrigued by the technique.  They were done with the dense wools used for military uniforms and apparently James Williams was a military tailor.  Presumably he made uniforms like these. The various colours used in the patchwork must relate to the different uniform colours, and I guess the yellows could have been used for parts like the epaulets?  Although the reds and blues are still vivid, the yellows have faded a lot - compare the corner sections below, showing the front and then the back. These are different corners, but the yellow has completely faded out from the front of the quilt and looks beige from the front. Elen said that this fading may have occurred when the patchwork was displayed in the early 20th century. 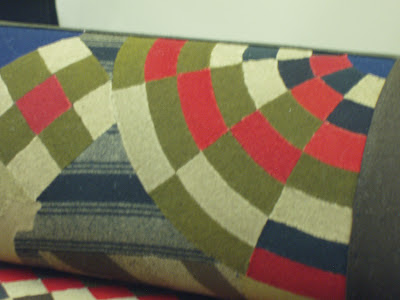 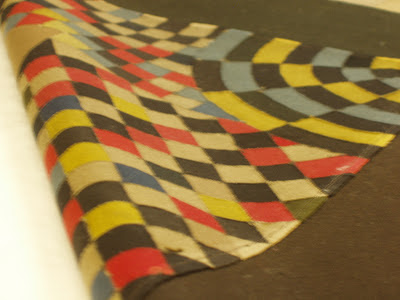 The technique is described by Lewis F.Day in 'Art in Needlework' (1900, quoted on page 95, 'The Quilts of the British Isles) as follows -

The cloth to be inlaid is placed upon the other, and both are cut through with one action of the knife, so hat parts cannot but fit. The coherent piece of material is then laid upon a piece of strong linen already in a frame, the vacant spaces in it are filled up by pieces of other stuff, and all are tacked down in place.  That done, the work is taken out of the frame and the edges are sewn together. The backing can then, if necessary, be removed.

Janet Rae goes on to explain that the cloth had to be thick enough 'to accommodate the oversewing required to hold the pieces in place.  The oversewing was done from the back with very fine stitches which did not completely pierce the cloth... Inlay was also accomplished with the customary seam and running stitch.'  The stitching is invisible from the front and is minute invisible on the back - the last photo shows the back. 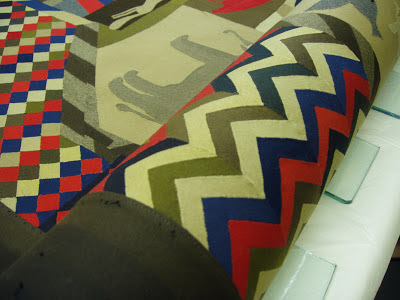 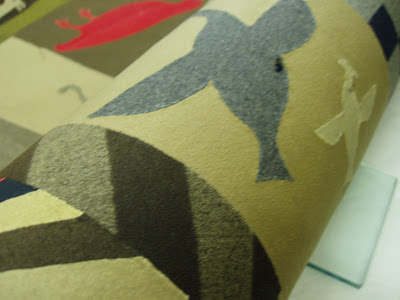 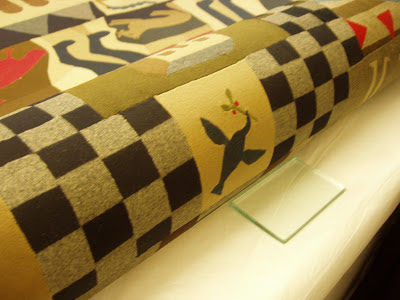 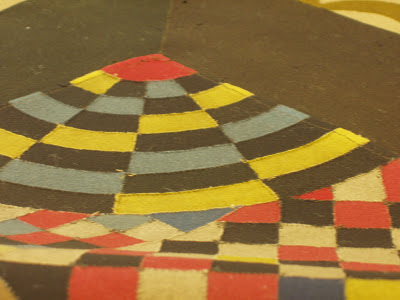 The following photo shows a detail from the one above, where you can see the oversewing holding the pieces together an the back stitching attaching the brown border.  I couldn't get photos any sharper than these - I was using the macro setting, but working without a flash or tripod, so it was tricky to get really sharp photos with longer speed settings. 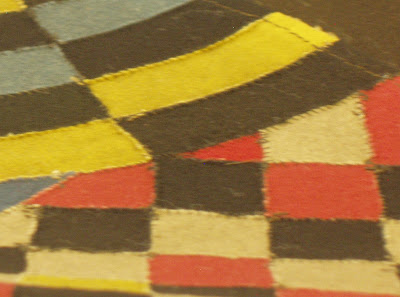 Elen and Glyn holding up the patchwork support roll.  The patchwork is stored on the roll, with the front outwards.  Elen explained that the museum plans to back the patchwork so it can be shown more often.  I would guess it can't hang without the seams pulling apart, as it is quite heavy.  A 'window' will be left in the backing, so the inlay technique can still be seen. 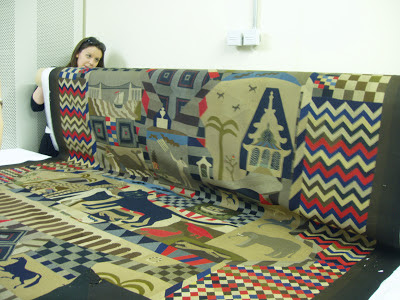 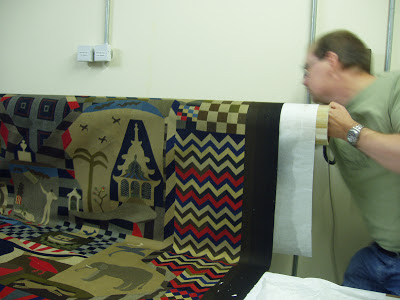 Perhaps a simpler design, like the font cover from St Telio's church at the museum, could make an interesting modern inlaid patchwork project, or be the starting point for a hexagon medallion centre? 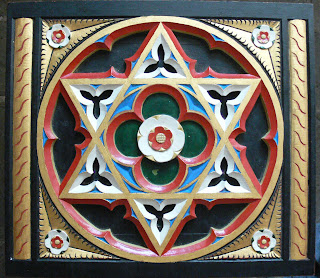 We had a fantastic day at St Fagans and I'm looking forward to visiting in future, perhaps in three years when the museum improvements will have been completed.
Posted by Susan Briscoe at 16:41