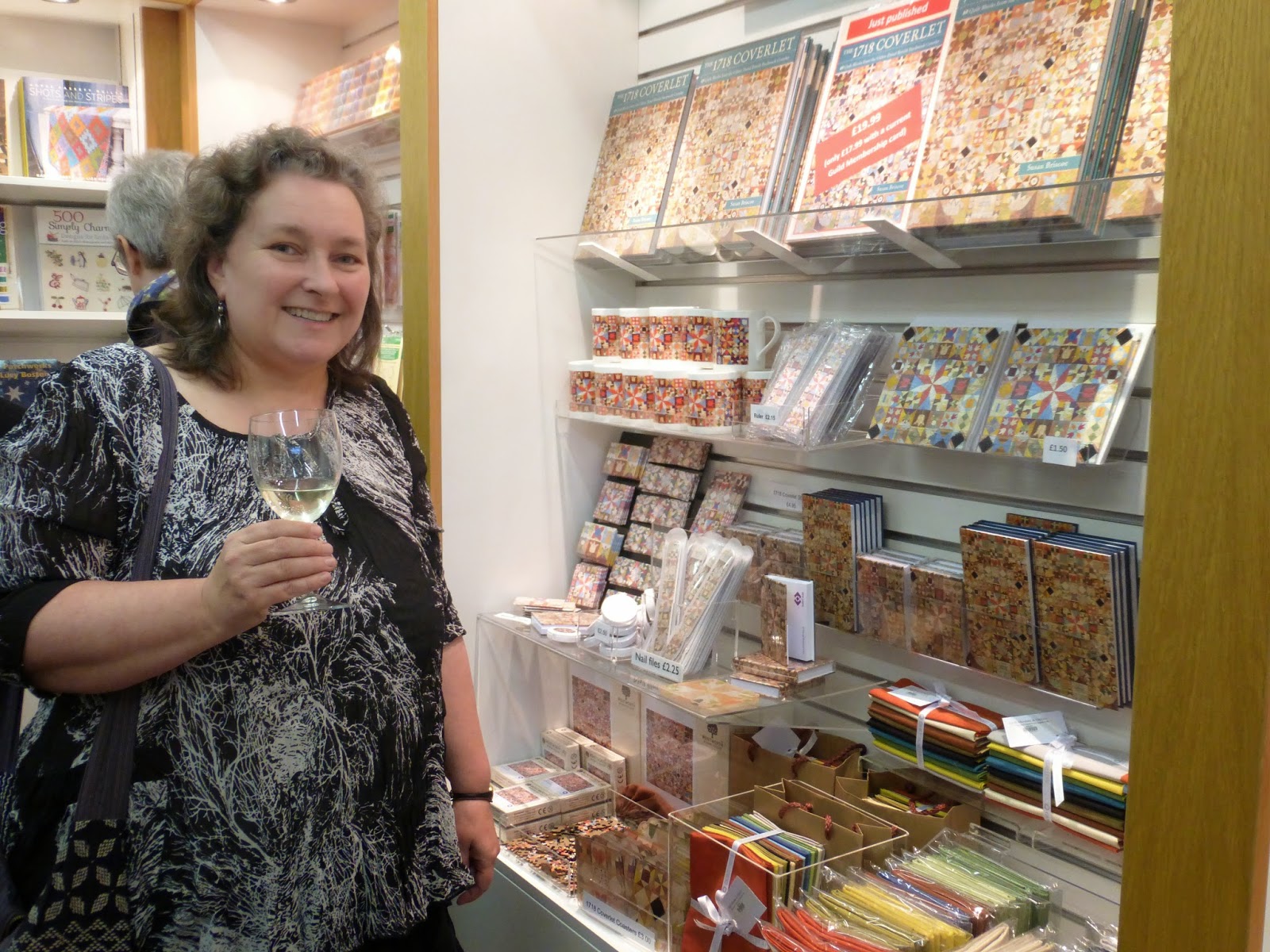 The Quilt Museum at York held a private view for the current exhibitions on Friday evening. There are three exhibitions at the moment - 'Sign Here!', 'Patchwork and Quilting in Britain' and 'The 1718 Silk Patchwork Coverlet'.  The museum has launched some new souvenir items to mark the 1718 exhibition and there was a '1718' display in the shop, featuring the book. 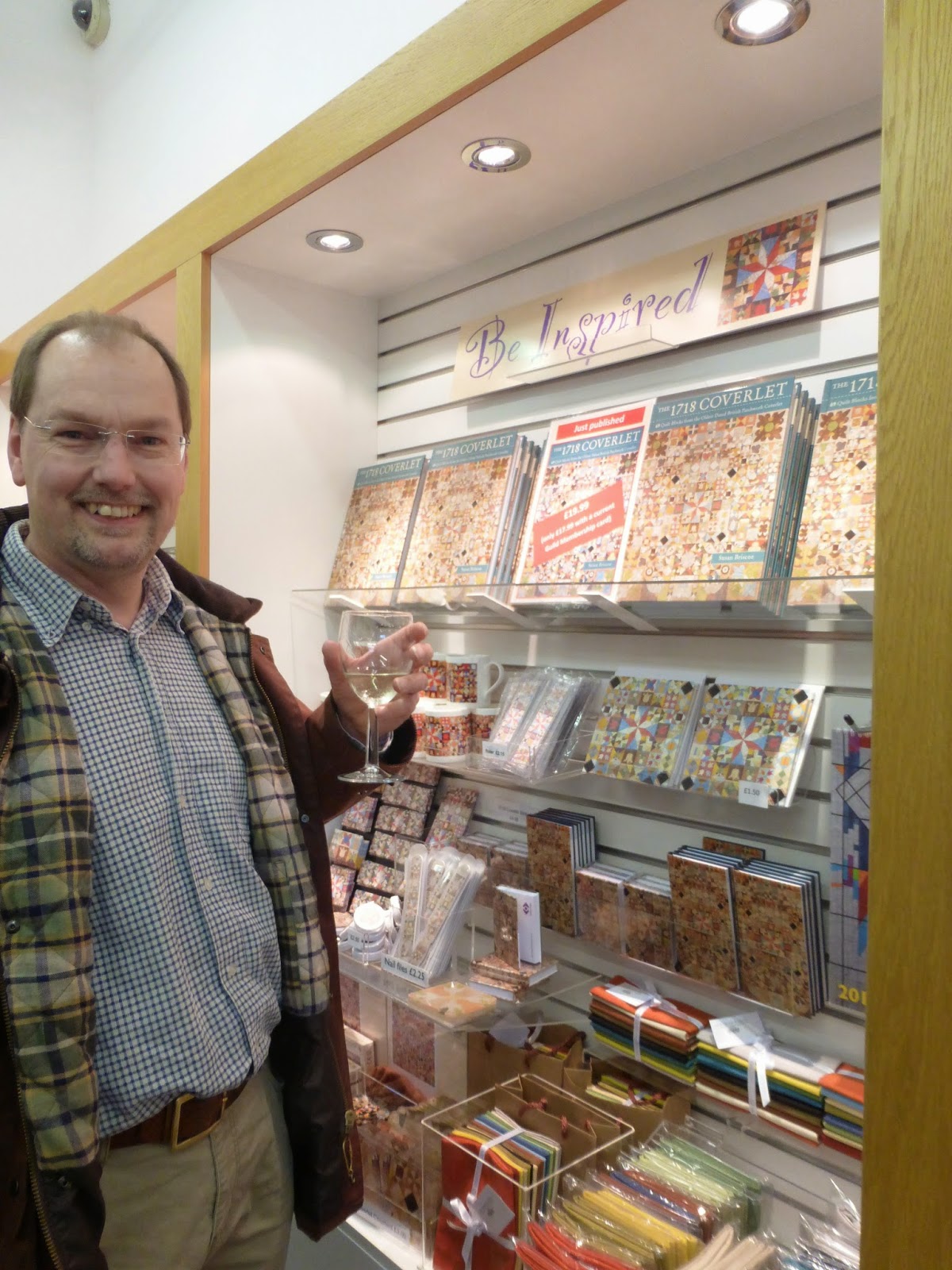 Ceramicist Cathy Daniels, who makes dishes inspired by quilt blocks, has made a number of one off pieces to commemorate the 1718 exhibition, for sale at the museum. 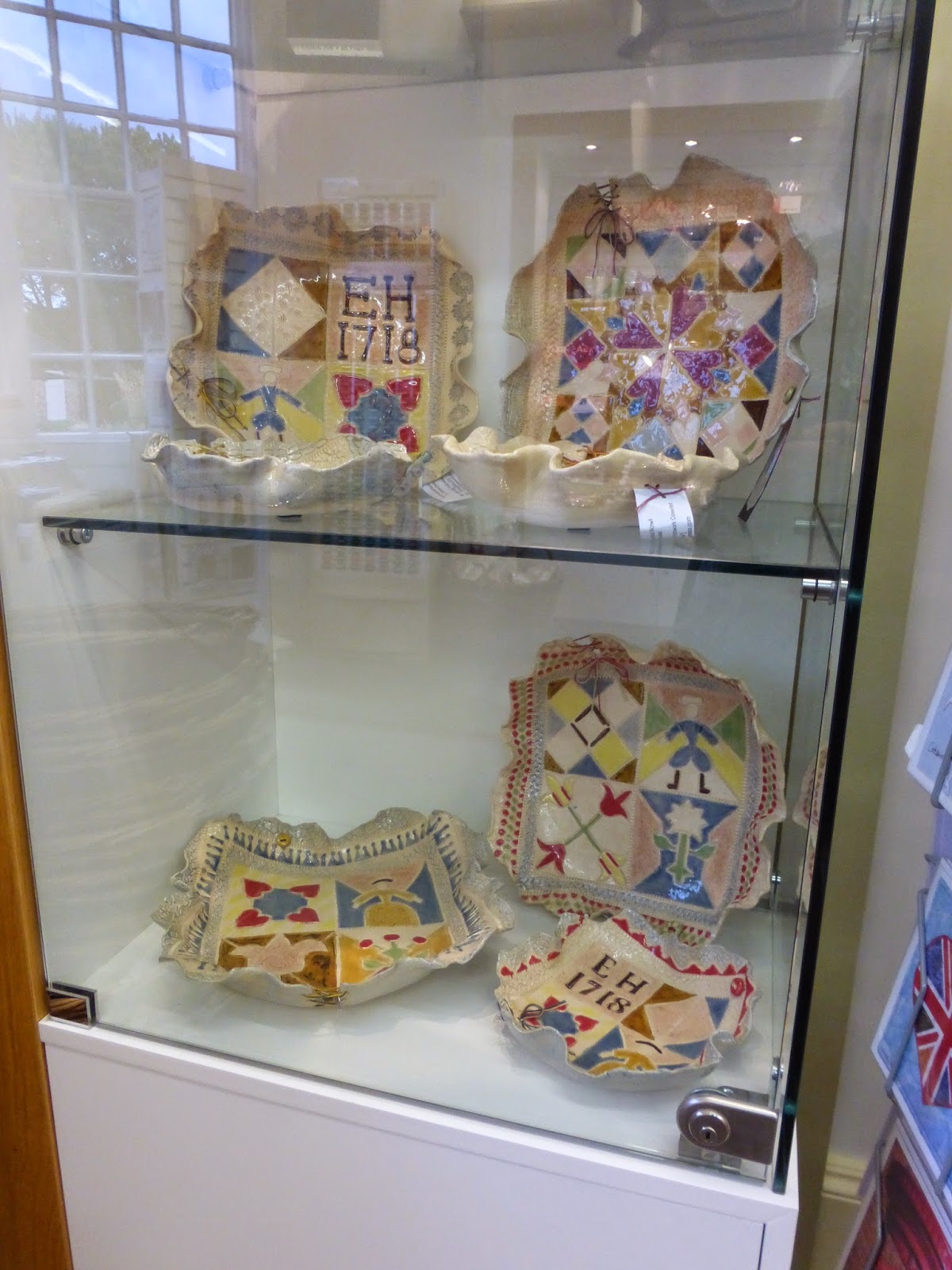 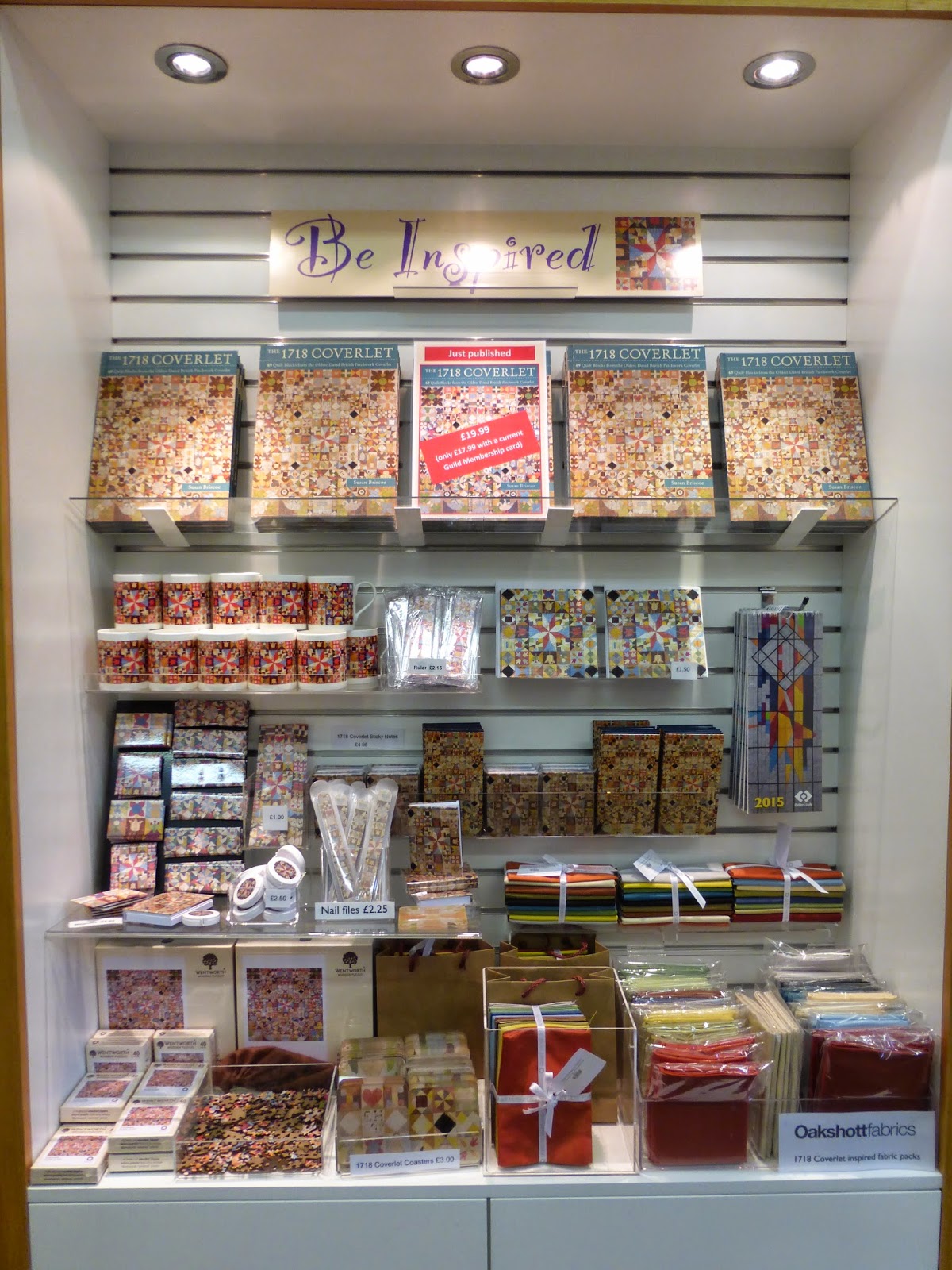 Another museum exclusive are Oakshott fabric packs, available as fat quarters or eighths, selected in the 1718 colours, plus some half metre pieces. 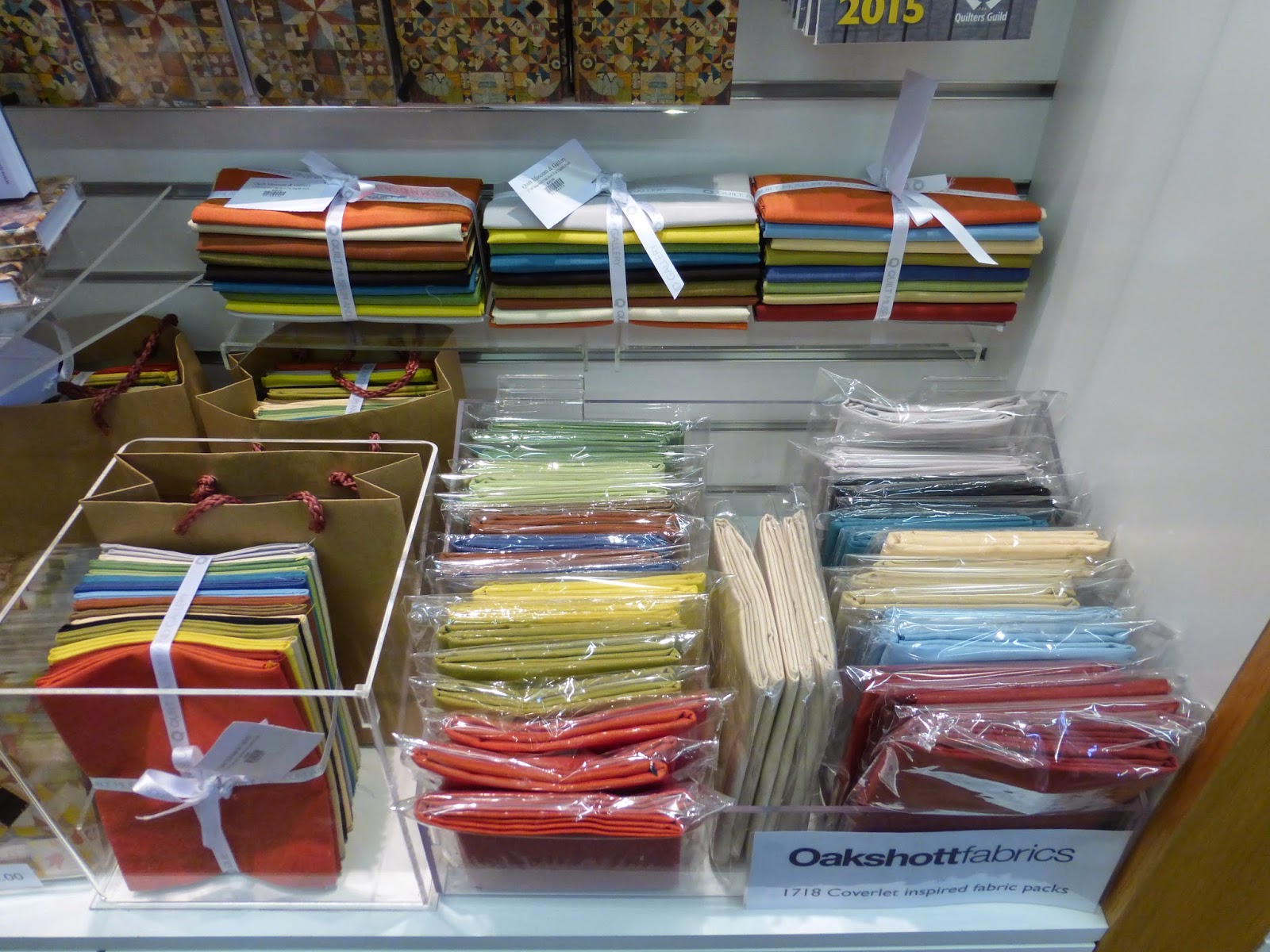 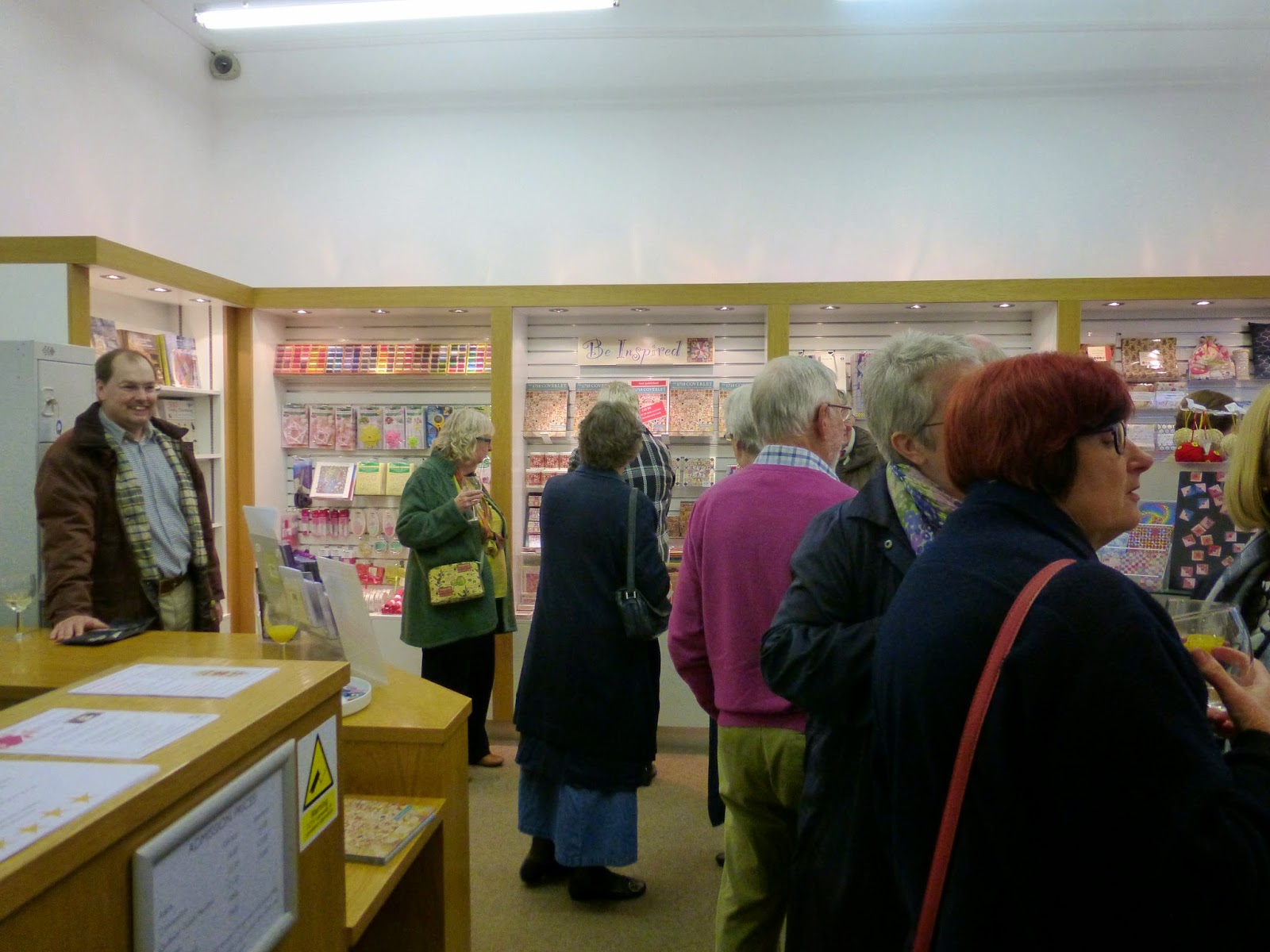 No photography is allowed in the galleries, but of course the centrepiece of the 1718 exhibition is the original coverlet, displayed flat at one end of the Bailey Gallery - 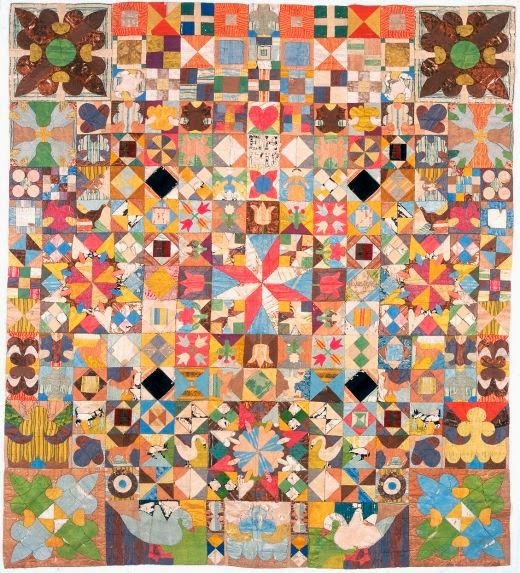 The 1718 replica coverlet is displayed at the other end.  It was great to be able to see them both together.  There is a video slideshow of the high resolution photos taken for the book, so you can study the blocks in great detail and compare them with the replica's interpretation. 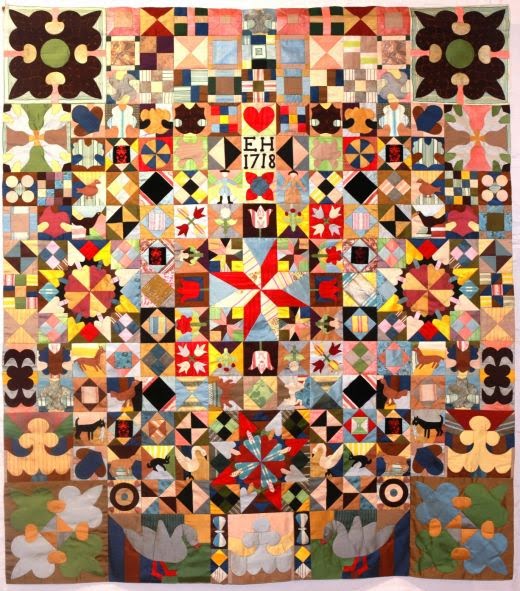 Maureen Poole's 'Cantata', made specially for the 1718 book, is on display next to the replica.  I was surprised to see that they actually share some fabrics - a pale gold dobby weave.  If you visit, see if you can spot the same fabric. 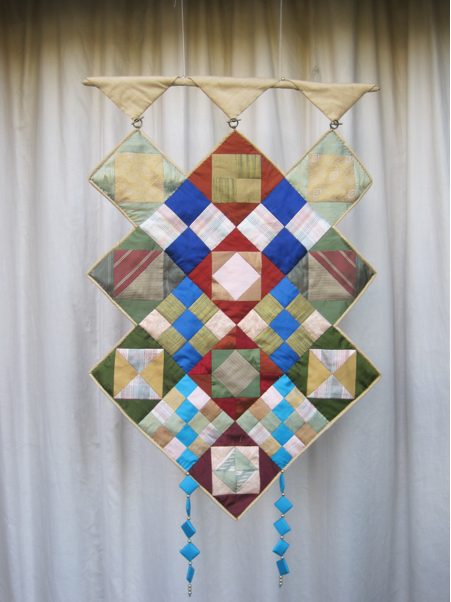 Another fascinating exhibit was a set of early eighteenth century patchwork chair covers, which showed the higher class silks of the day - brightly coloured silk brocades, much more expensive fabrics than those used in the 1718 coverlet.  These chair seat covers had never been used and the papers are intact, from printed pamphlets and copybooks.  The colours are still vivid and the silver metallic threads really sparkle.  I'm sure someone said that these had been acquired for the Museum's collection.  I don't have photos but I am sure we will be seeing images soon.

The signature quilt exhibition was very interesting and featured a large number of quilts on loan, as well as pieces from the Museum's collection.  As well as for quilters, this exhibition could be a wonderful resource for family historians, as the signature quilts are very well documented, usually having the name of the organisation, often a chapel, and location on them.

On Saturday, we had the first of two '1718 Revisited' workshops.  We explored making some of the blocks in patchwork and applique, dealing with fussy cutting stripes for diagonally quartered blocks, piecing bias edges, piecing mitred corners (all by machine), and various methods for applique, including the monogram block using Steam-a-Seam II, the heart block with freezer paper applique and the basics of needleturn applique - all modern techniques that weren't used in the original, but an alternative (and quicker) way to make the blocks than by mosaic patchwork.  The quatrefoil fleur de lys blocks in the foreground in the first photo below, which are the two top corner blocks in the original, are my workshop samples.  The bright and well equipped workshop is on the ground floor at the museum, next to the shop, and the computerised Brother sewing machines are provided, so you don't need to struggle bringing your own machine to the museum.  The museum also provided the Steam-a-Seam and freezer paper, as each block only needs a very small amount of each. 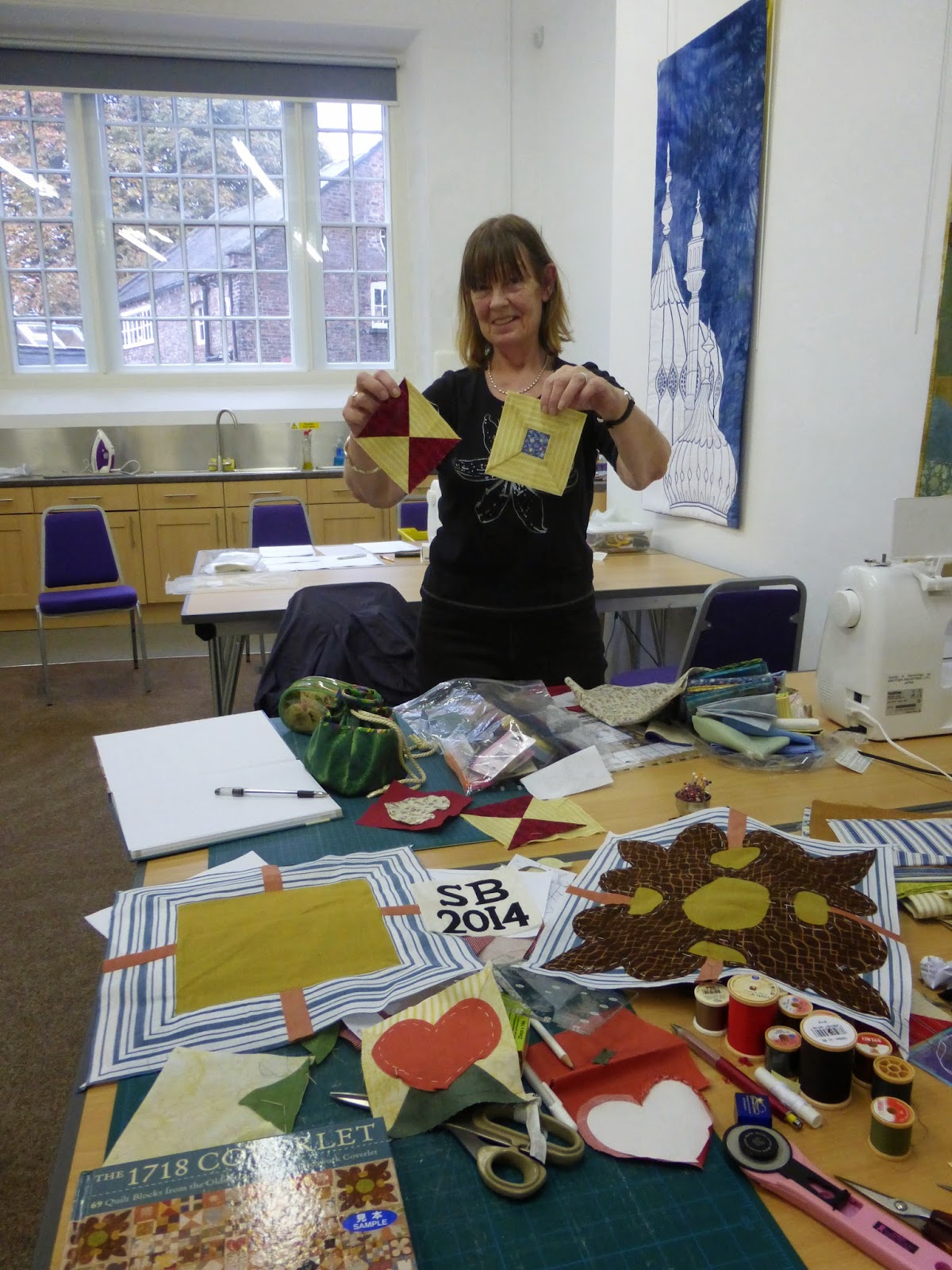 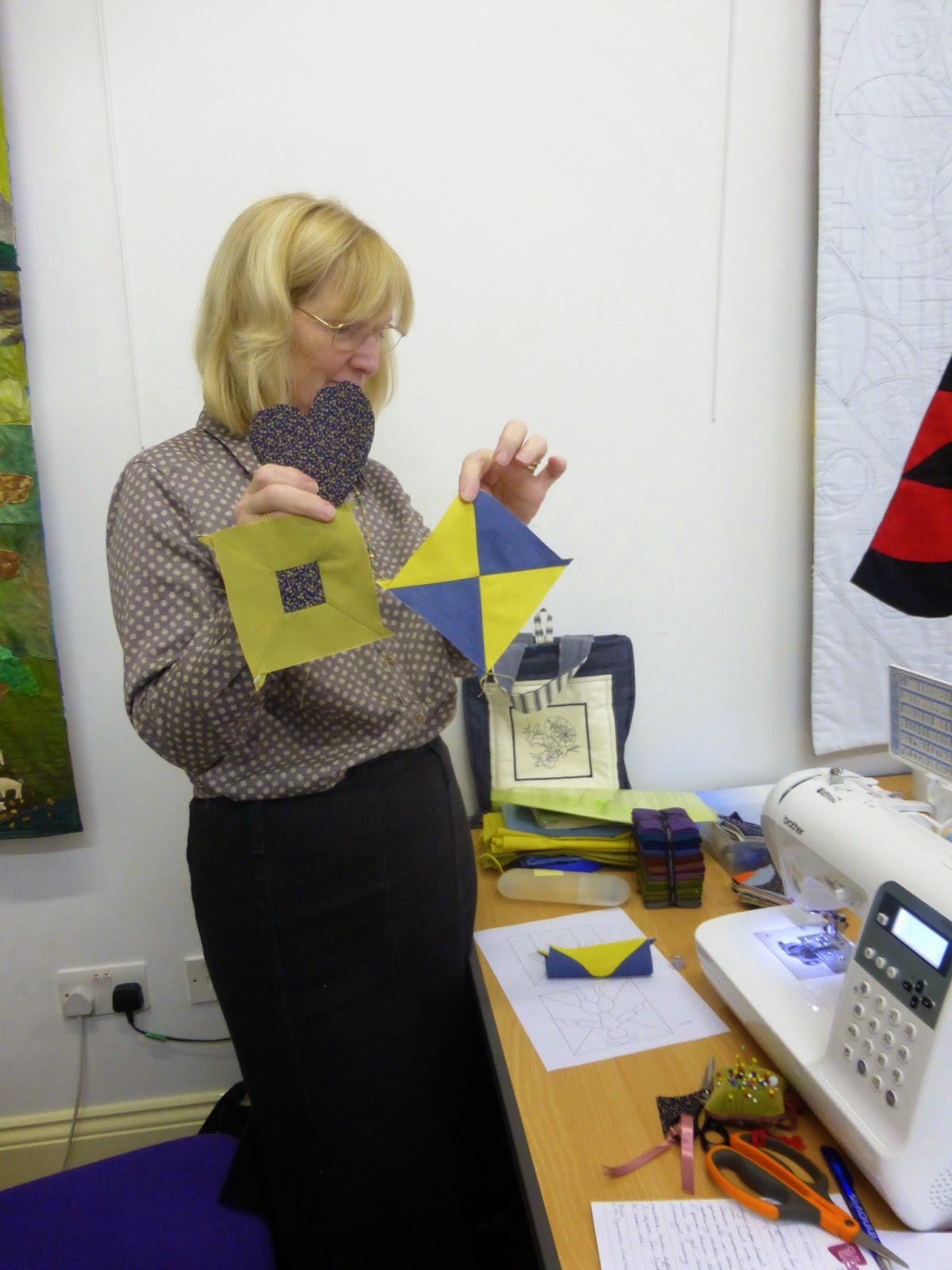 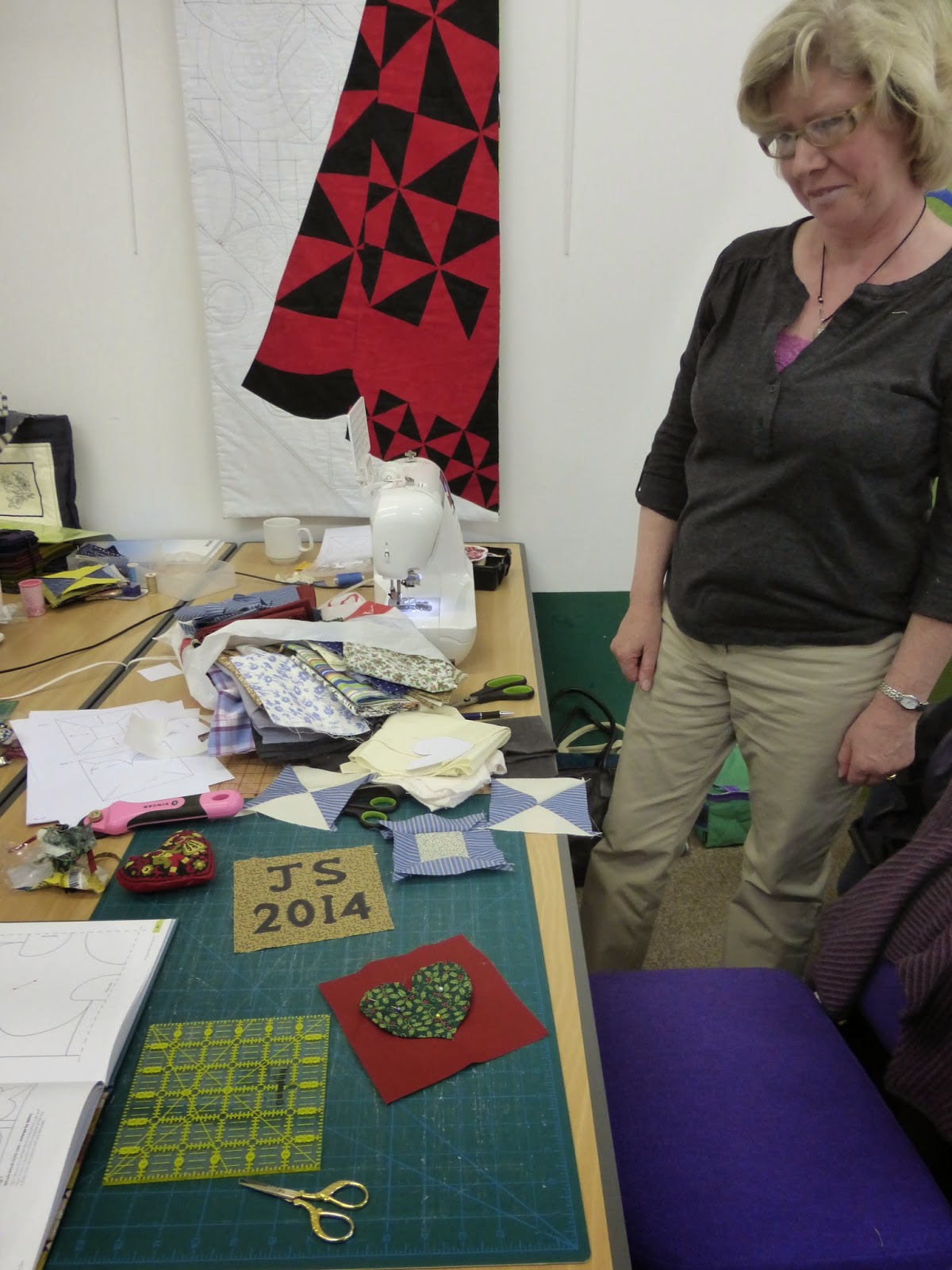 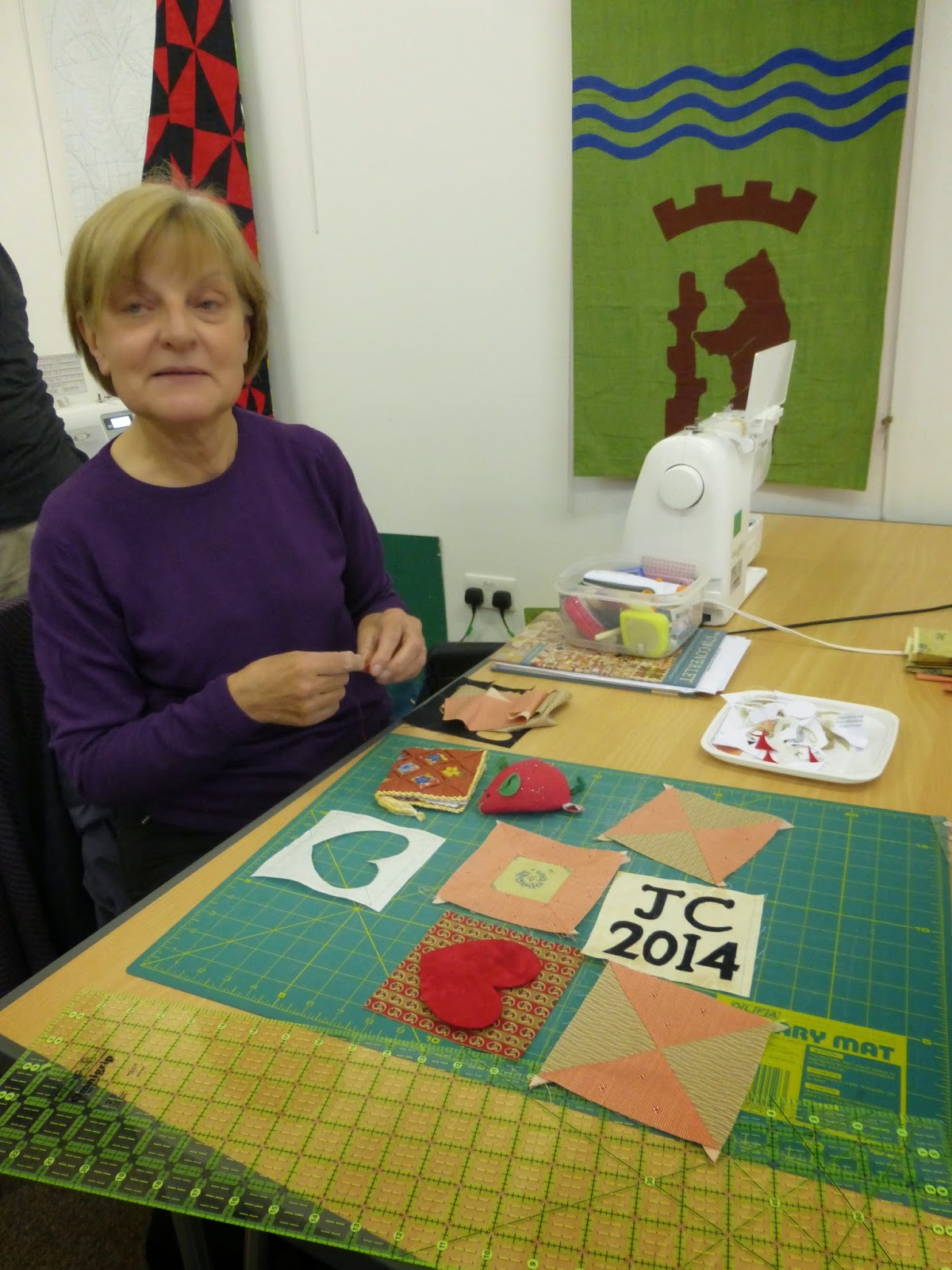 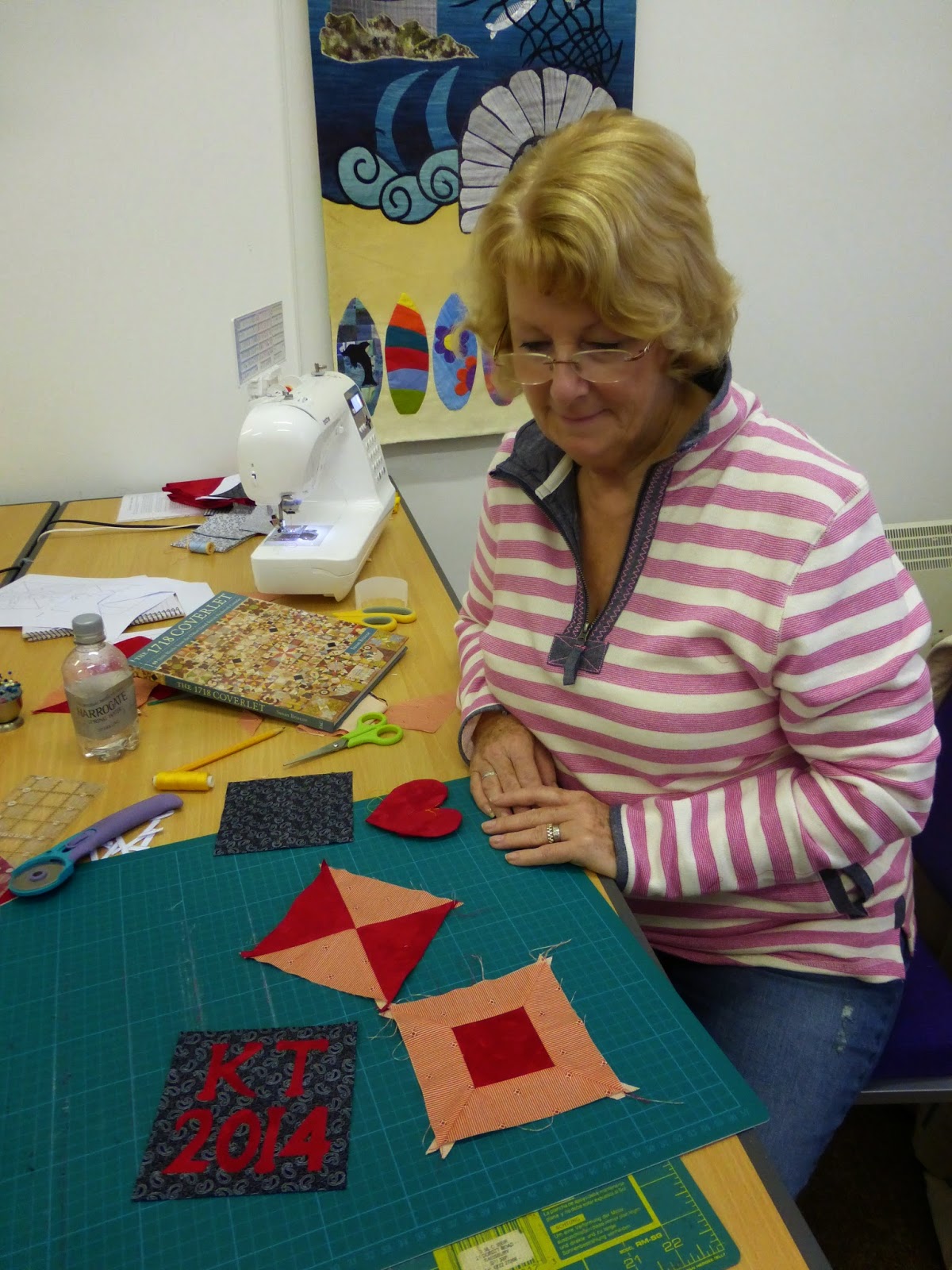 We had fun playing around with different fabric combinations, especially with the directional fabrics and I'm looking forward to seeing more 1718 projects started at our second workshop on 5th November, when we are running the same workshop again.  I think it would work well as a three day course too, with much more scope for making many more blocks, so I'll have to work on that.
Posted by Susan Briscoe at 12:23