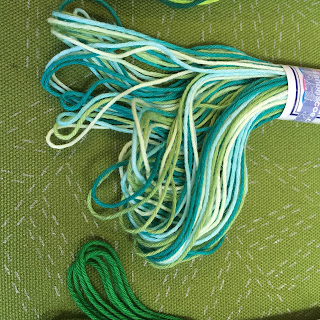 Sometimes a sashiko panel works equally well with different colour combinations, but choosing which to go for can be tricky! I went through this process recently, to help some customers choose colours for the Seasons Greetings panels in green and dark indigo blue, by 'auditioning' different thread colours and taking some photos. The first photo (above) shows the green panel with 20m #51 (shaded green) and #26. Although #51 has parts that are almost the same as the green fabric, they are a slightly different colour and a very slightly lighter value, while the sea green, light sea green, white and shading sections would show up really well. These are 6ply medium sashiko threads, and for this panel I would stitch with them singly, not doubled, as that would be too thick. Each 'pine needle' has two rows of staggered stitches, so you stitch out from the branch and back again (very well thought out), and a doubled medium thread would make the pine needles much thicker than in real life.

Then I looked at the possibilities in the 370m fine sashiko thread range, which is 4ply thread. These would all show up against the green panel, because they are different green colours, but the value of #11 jade green is probably a little too close to the green fabric, so it might not show up as well. The dark green #15 would show up well and look like a very natural pine colour. #8 bright mid green, between #11 and #15, looked quite vivid against the green fabric, but looked good against the indigo blue. The all looked good against the indigo, and the contrast with #11 and #8 was much better. I think those colours would work well on the indigo, but maybe not so much on the green. I can't make up my mind about the varigated shade #F, which might work for the green but I think the dark section wouldn't show up so well on the indigo. The 370m shaded threads have very long 'pitch' or colour change compared to the 20m threads, so several adjacent needles would end up the same shade and colour, which might give a slightly clumped effect to the needles. Althoug it is a 4ply, I think using it doubled might be too thick for the pine needles, but I would need to experiment to be sure. Either used single or double, I think one skein would probably be enough for the tree. 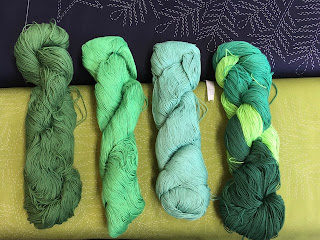 Next, we have the 100m #107 light green 6ply medium. This is a slightly different green from the background fabric, and slightly lighter. It would make a subtle contrast, but isn't a natural green for a pine tree (but does that matter?) 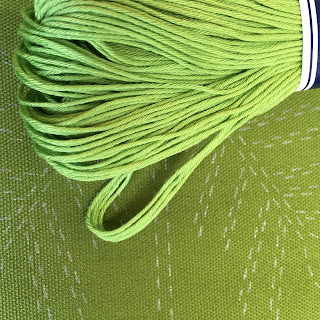 20m #07 mid green (at the top in the next photo) is a different green again, maybe a bit more like the colour of a real pine needle, but perhaps doesn't show up strongly enough against the background. It would work well on the indigo blue. Unfortunately this colour isn't produced in 100m skeins (yet!), but it is available in 80m fine 3ply thread balls, as shade #207, and would suit being used doubled. 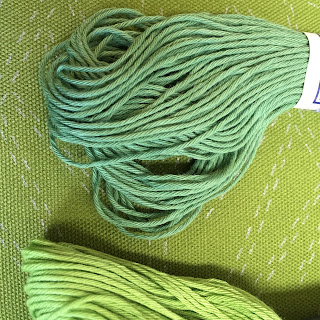 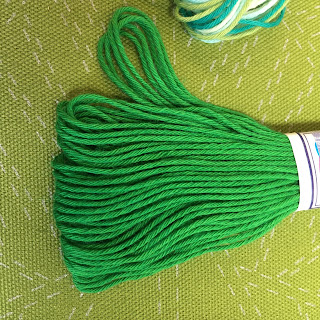 So does #77, which would introduce touches of blue into the greens, and look very vibrant. 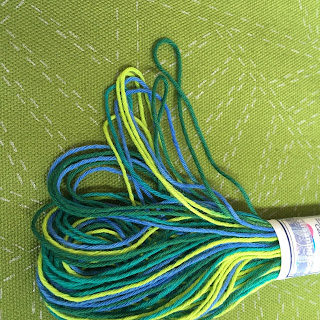 Here are all the threads above shown with the green and indigo blue panels. It is a tough choice, and your Christmas decor plans would also influence which colours you use. 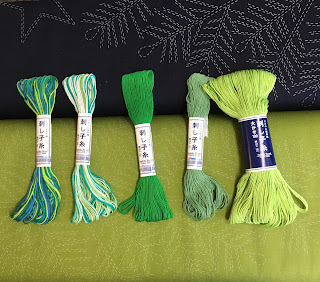 I have been thinking about using a different colour for the branches. These are all 100m threads. For some of the greens, #106 yellow ochre would be a good coordinate, and I think the darker greens would look good with #114 brown, which is perhaps the most realistic colour. I think white or cream would look lovely for the pine needles on either panel, perhaps with #113 light grey for the branches. 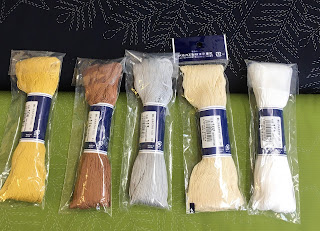 There are so many options. Who says your tree has to be a 'natural' colour? There are also some blues which look very much like pine, such as 20m #72. All these thread colours are available from my website. I'll have to make my mind up soon, because I need to start stitching!