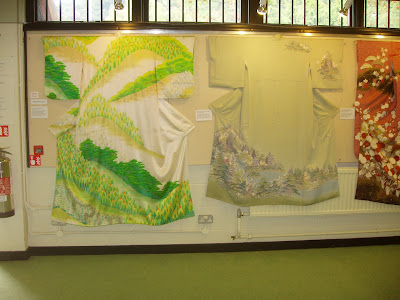 A spring scene in yuzen (rice paste resist dye) with gold stencilled highlights with yosōku designs (ancient patterns of the ). Compare this scene with the view from the window above.

The greens are very vivid in reality and the silk satin is ultra glossy. Not a kimono I would ever consider wearing, but it makes a wonderful wallhanging! The hills topped with various kinds of forests remind me of the view above Llangollen, where there are coniferous and deciduous trees in different woodlands. We kept the gallery's side door open whenever possible during the exhibition, so visitors could see the same kind of view across the valley. 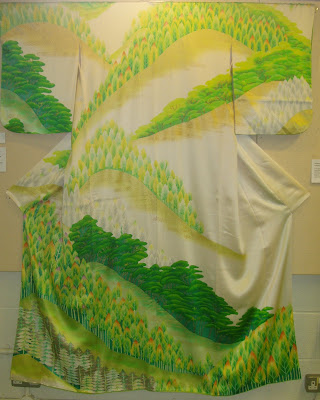 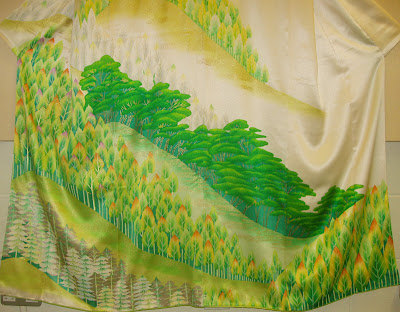 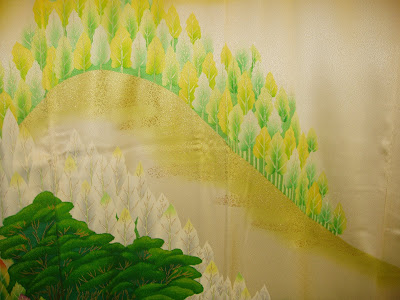 A rural lakeside scene, with “all season” flowers and foliage. Yuzen (rice paste resist dye). The dyer’s seal is visible on the right. It can be worn from Autumn through to Spring.

Yamato Kimono, one of the two kimono franchises at the old Jusco department store that used to be opposite Sakata station, used to have displays of karinui with this kind of landscape design, which were my favourites. Typical price labels were 350,000 Yen (£1400 in 1992!), which was considerably more than a month's salary for an assistant English teacher back then. They were also a style of kimono that would have been too mature for me to wear then, and I wouldn't really be able to wear legitimately for a few years yet. Luckily (for me) this second hand kimono has a couple of small stains on the front which considerably reduced its value - one of them could be seen if the kimono were worn - so I could add it to my collection as a great example of yuzen dyeing. Like several of the kimono in the exhibition, these marks are not visible when the kimono is displayed on the wall, so they don't matter too much for me.

The green seems to be tricky to photograph. The background colour deepens towards the hem, but the rest of the kimono is the same shade of soft light sage green. 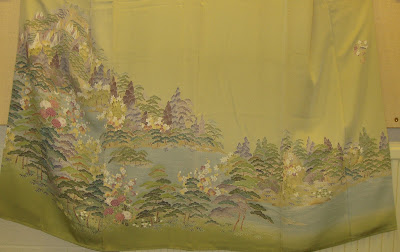 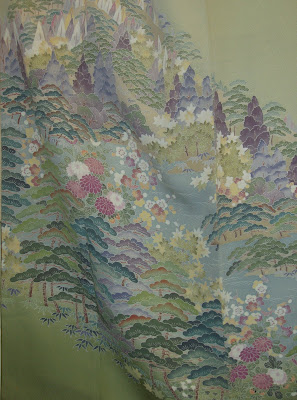 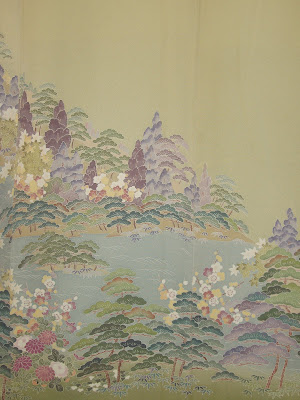 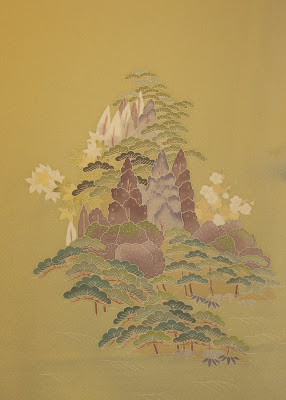 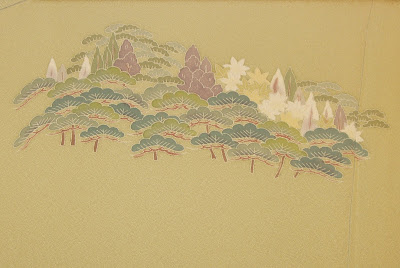 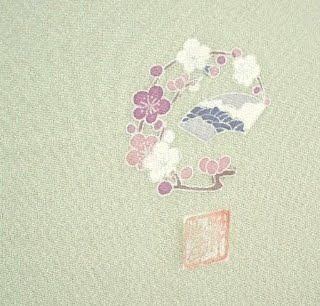 The rather "antique" subdued colouring makes a refreshing change for many modern furisode, after the ultra brights of the last two decades of the Showa era (1970s & 1980s). 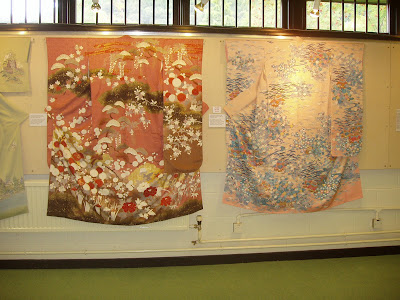 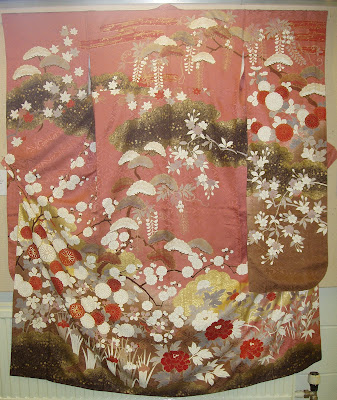 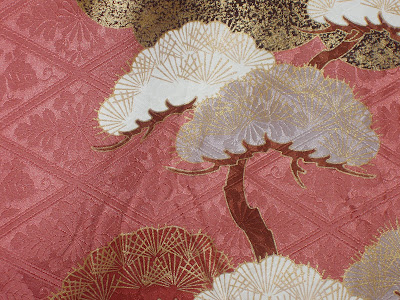 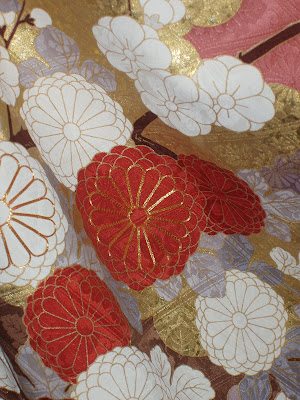 An “all season” scene in the chayatsuji (tea garden) style, a design which originated for katabira (summer hemp kimono) in the eighteenth century. It can be worn from Autumn through to Spring.

The imaginary landscape invites you to take a walk in a dream... The little tea houses and pavilions have several variations in design, all very appealing - I would love to have one in my garden! 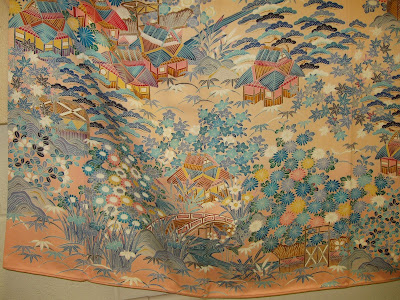 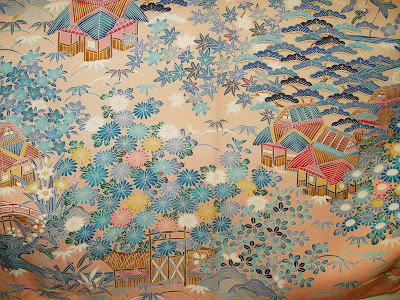 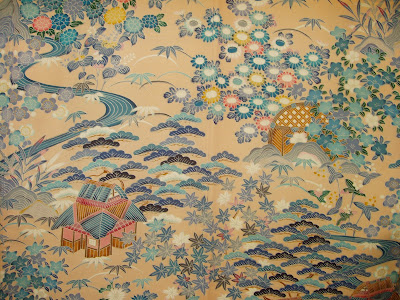 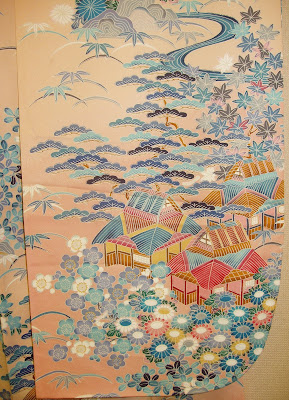 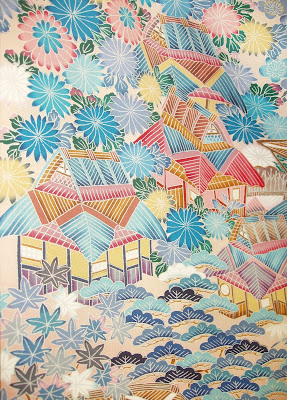 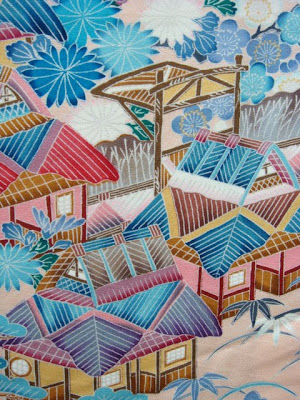 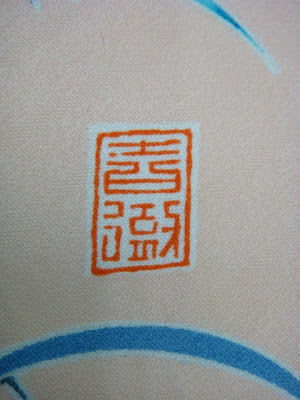 Originally the front of an informal obi, the chayatsuji (tea garden) design shows how delicate and detailed early twentieth century yuzen (rice paste resist) dyeing is in comparison with modern yuzen (see previous two furisode kimono). Details are outlined in black, painted on after dyeing. Earlier yuzen usually features this fine painting as well as the dyed motifs, rather like pen and ink with watercolour washes.

The obi may have been chuya (“night and day” – reversible), and would have had a stiff woven silk interfacing.

Sorry the first picture isn't very big. I bought this fabric with the idea that I might remake it into an obi, but now I don't think I will - it wouldn't improve it in any way and it would be much harder to display! 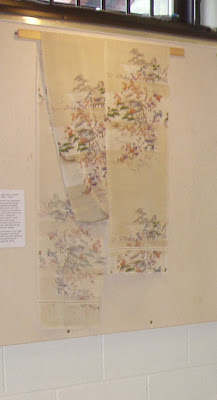 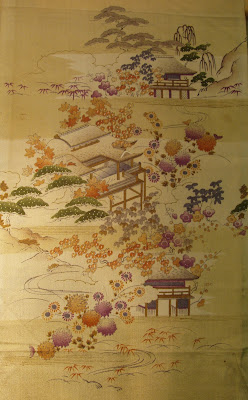 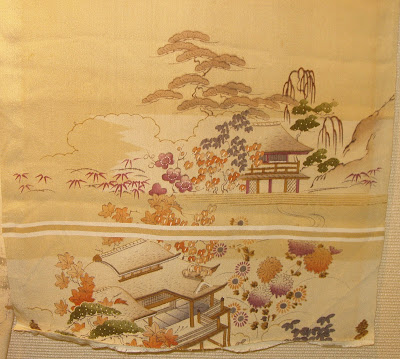