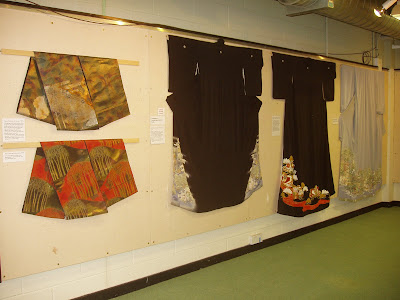 “The Bridge at Uji” (also called ) is the most important ancient bridge linking the two historical cities and . It is the setting for the final scene in the Japanese classic The Tale of Genji (Genji Monogatari). It became an extremely popular theme during the seventeenth century, often on folding screens. Classical Japanese designs like this are usually considered higher status than modern motifs.

Lovely design. It has a slight fold line where the obi wraps around the body, but I would like to wear this sometime. 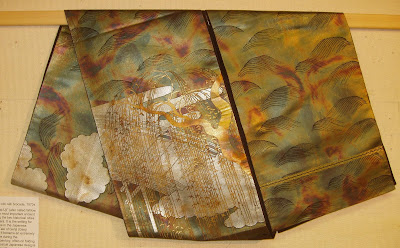 A modern design of winter trees, appropriate for late November and early December only.

One of my favourite motifs, although for my least favourite time of year! 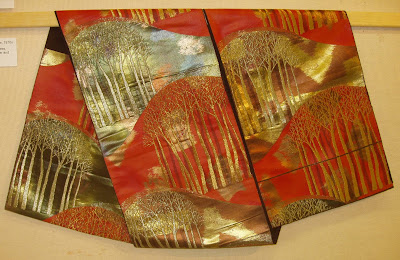 Susomoyō - Landscape on the skirt

Yuzen (rice paste resist dye) design of a mountain retreat, arranged as a ryozuma (mirror image) design. Landscape designs along the skirt of the kimono became popular in the late nineteenth century and are typical of formal kimono today, although the ryozuma pattern layout is rarely seen after the mid twentieth century.

Once again, the delicacy and quality of the yuzen is way above modern yuzen. The kinsha silk also isn't used for kurotomesode now. Kinsha is so much lighter and thinner than chirimen and must have been lovely to wear. I suspect modern air conditioning at wedding venues has much to answer for, in the disappearance of kinsha for kurotomesode and the scarcity of ro kurotomesode nowadays. 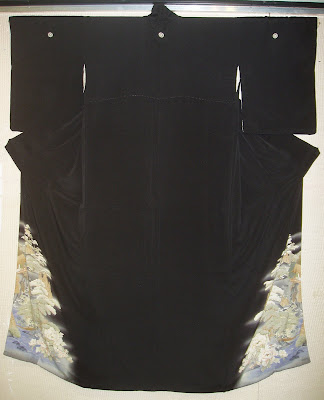 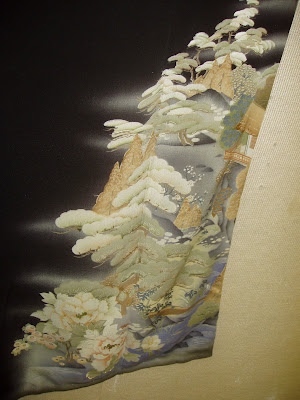 A tomesode karinui (kimono fabric) has been lengthened by adding an extra panel into the back, to make it long enough for a geisha’s formal de kimono. The shape of the back of the collar is much lower than normal kimono and there is padding at the hem. Unlike the other kimono displayed on the walls in the exhibition, this is worn to trail on the floor indoors. The abstract design hybridises pine boughs and karabana (imaginary Chinese flowers) over a stream.

This kimono is a bit of a puzzle. I don't know if it ever belonged to a real geisha (who certainly do wear hikizuri made from kurotomesode karinui) but the crests are the standard kiri (paulownia) crest that anyone can wear, and I would have expected the crest of a geisha house instead. Maybe someone who knows more about geisha okiya crests could give me an idea? I don't think it was made for geisha henshin (the dressing up studios popular in places like Kyoto) as it is hardly worn and there's no stock number hidden inside. Any ideas? 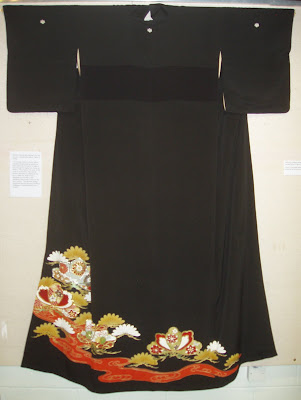 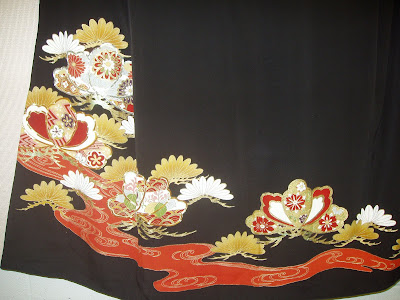 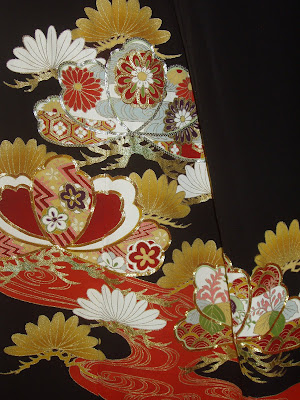 Another kimono fabric with similar designs to those I used to admire at Yamato Kimono. This one has very slight fading and yellowing along the seams and on the collar fabric. I don't know if I would make it into kimono - the side seam fading would disappear into the seam allowance and I might be able to turn the collar round so the better end appears on the left (the right would be overlapped when the kimono was worn). I'll have to check it out in daylight and see how bad it really is - it looks perfect when displayed like this though! 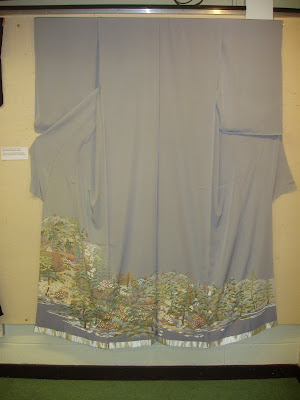 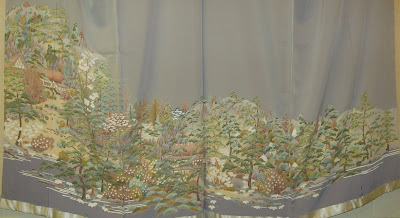 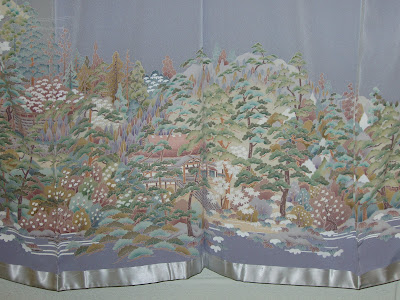 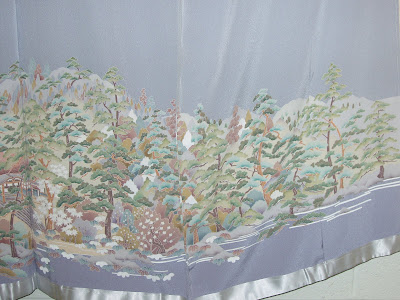 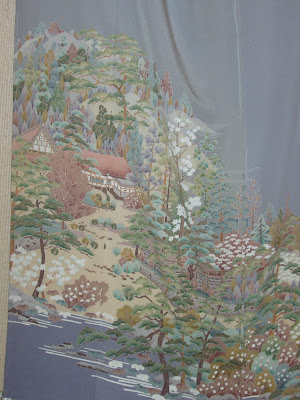