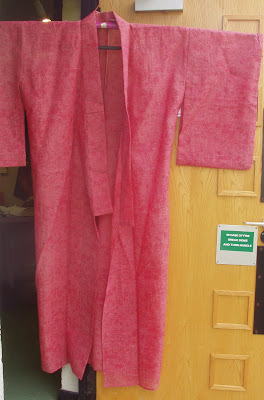 I bought the bolt for this kimono in 1992, in Jusco department store in Sakata, Japan. The "old" Jusco, opposite Sakata railway station, had two kimono franchises. One of them was a Yamato Kimono franchise, quite expensive, mostly formal kimono, where I used to drool over the gorgeous yuzen-dyed tomesode and houmongi. The other one was where I used to buy stuff, because it was cheaper!

I even have a photo of me at the kimono sale where I bought it. I wonder who bought the green shibori furisode on my far right? That is the one kimono (karinui technically) that I can remember from that sale, but 50,000 Yen was out of my budget.

When I bought it, for just 1500 Yen in the sale (about £10 today, but only £6 then), I wasn't sure if I would use it for making kimono or maybe make a kicho screen style room divider out of it. Mary Tamakoshi from Euro Japan Links convinced me it was a really nice piece of fabric a few years ago, so it moved firmly into the kimono sewing pile.

When I bought it, I also got two purple summer bolts, which were even cheaper - only 1000 Yen! I bought a straw coloured summer fukuro obi with a design of grasses and a plain peach polyester obijime & obiage set to wear with the obi. Now I have finished the kimono, I'll look out the obi and accessories and try the whole lot together sometime.

I would like to wear it on Sunday, at the kimono exhibition, with this blue summer obi - 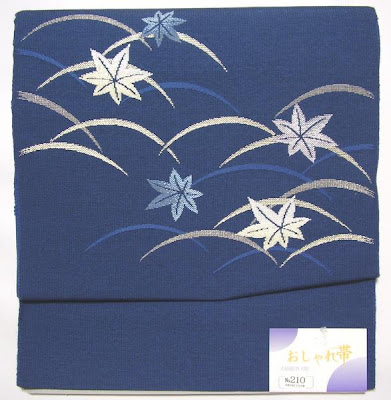