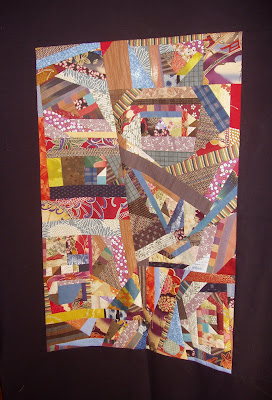 Utility quilts and quilts that use up lots of scraps in a very random fashion are some of my favourites, both to look at and to make. They are like abstract art, with so much to engage the eye.

The top above, less than 1 metre long, was made using scraps left over from my "Japanese Quilt Blocks to Mix and Match" blocks. It isn't quilted yet and I plan to machine quilt it, with a variable grid, like the one used in my "O-neesan" quilt below. Although the centre is wedge-shaped, the bottom doesn't actually curve - just an illusion caused by hanging the quilt top over clothes on the front of my wardrobe!

To start making patchwork like this, I find it is best to begin by sorting out the scraps by size and start piecing using the smallest ones. It is more economical that way. The quilt is made in sections, like Log Cabin blocks, working outwards from the centre, just adding strip pieces. The JQB one looks quite complicated, because most of the strips are made up of squares and triangles - anything leftover - plus there are quite a lot of strips cut across stripe patterns. Every so often, I trim the "block" edges straight, though not square. Once I've got several large pieces, I start trimming and fitting them together. 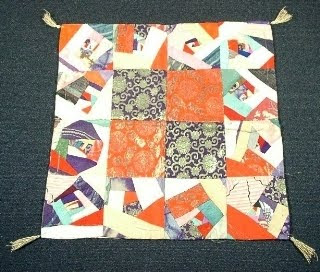 It was recently sold by Ichiroya. They classed it as kiribame, which is usually used to refer to "inlaid" patchwork like this, so I'm wondering if they are using that word to refer to all patchwork which has some kind of paper inside (like English paper piecing) or a foundation paper/fabric. Unfortunately, kiribame is also used to describe inlaid metalwork, so researching the topic gives a lot of false leads.

"Jelly Roll Crumbs" is a less complicated version of a crazy scrap patchwork. Having all the scraps the same width (ends of Jelly Roll strips, so 2 1/2in wide) made patchwork easier. The middle is just one big random Log Cabin block. 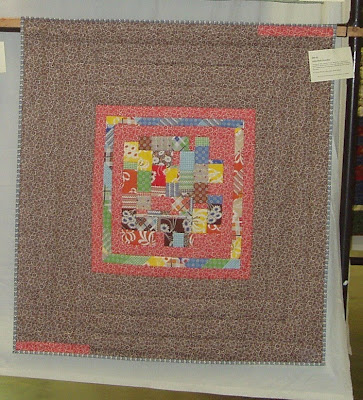 And "Lulea Blockhus" (Lulea Log Cabin) uses a block based approach to make the top, with the block centres being the only regular sized piece. 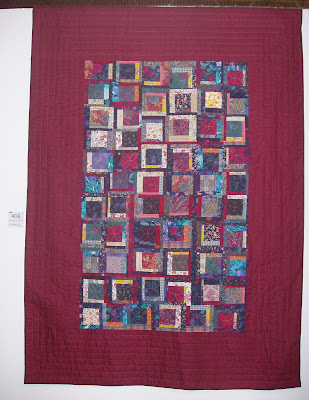 Planning? Not much really. You just have to jump in and get started, then start playing around and arranging the pieces you have made until you like the effect.
Posted by Susan Briscoe at 10:10