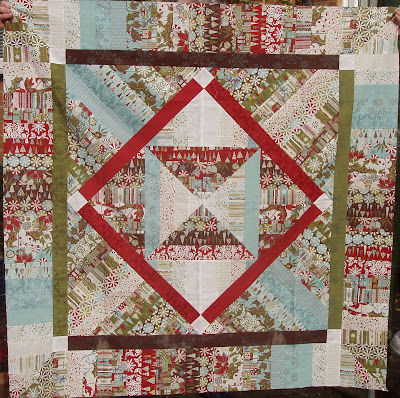 We had a good workshop at Gresford, everyone getting along very well and making the centres in record time. Unfortunately I forgot to take the camera, so I will have to update the photos when I can. Debbie's traditional Christmas patchwork, in red, green, cream and lots of gold metallic, looked sumptuous, while Margaret's batik roll panel, using one of the Fabric Freedom roll cuts, was very fresh & summery. Hopefully, I will see both of them on Tuesday night and I can take photos then.

Margaret and Pat used the same roll cut. It was very interesting as their centre panels are quite different. I've seen this kind of effect before, with two tops made from the same roll at different workshops, but never side by side. There is so much variety in a roll, even if the same person used the same roll twice for this quilt it would probably come out very differently. Here are some photos from previous workshop tops made using a rainbow batik roll (I think these were Fabric Freedom too). The first one was made at the Jersey workshop in June 2009. 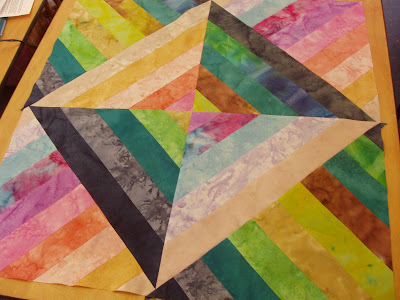 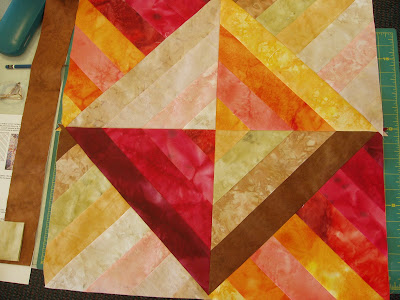 Rosemary made her top using a "roll" very similar to the Bali Pop I used for my quilt centre (below) - mine is in Kiwiberry colourway while Rosemary's is in Mulberry, which is slightly more subtle. The Bali batik fabrics from Hoffman are lucious colours and the fabric is very high quality. It is a shame that these handcut rolls aren't as accurately cut as Moda Jelly Rolls, so a little fudging is required when sewing them together. Not what you would expect of Hoffman fabrics at all - they are usually noted for their product quality. With the high thread count of Bali Batiks, the odd scant seam allowance doesn't hurt. 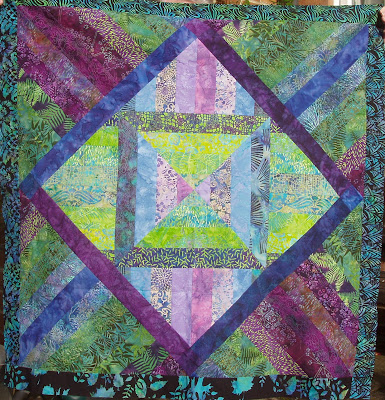 I was persuaded to open up my new batik roll - this one I bought at the Malvern show in October. It is gorgeous and I can't wait to start making another workshop sample with it. The colours reminded me of the autumn foliage as I drove down to Malvern for the quilt show, but everyone else decided it had a very African feeling to it. 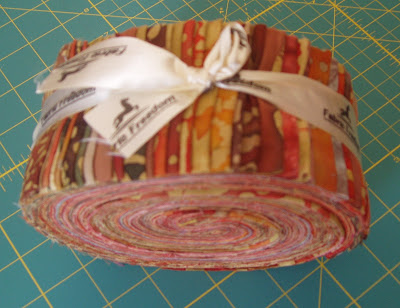 Four of the quilters today were using Fabric Freedom rolls and we noticed that the strips are slightly wider cut than the Moda Jelly Rolls. Luckily for this design, it doesn't matter if the strip cut isn't perfectly 21/2in, although it is easier if it is at least evenly cut. I'll see how my Fabric Freedom batik roll works out!
Posted by Susan Briscoe at 18:39

It never fails to amaze me how much variety us quilters can get from the same pattern or even the same fabric.