Wrexham seems to be dooing poorly on the heritage front recently. Although there is a wealth if industrial history in this area, going back to the Romans and beyond, in coal and metals mining and production, recent developments have not always been good. (This long post seemed a bit dull without some photos, so I've added a few!)

Clwyd County Council, superseded by Wrexham County Borough Council in 1996, set up centres like Bersham and Minera Lead Mines, around the history of iron and lead respectively. Photo - Dad and his brother Bernard at Minera in 2008. 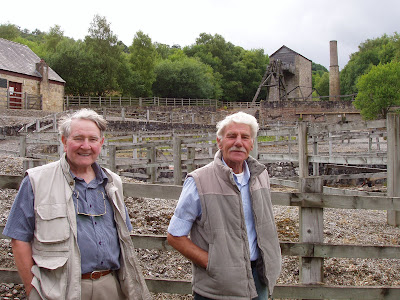 In August, the Mines Rescue Station was partly demolished. It is owned by former Wrexham FC chairman Neville Dickens. Click here for the news story.

The mines rescue station was opened to help find survivors of mining accidents.

Those who trained there helped in the mission to rescue miners from the 1934 Gresford disaster, when an explosion claimed the lives of 266 people.

The centre closed in the 1980s and campaigners have long called for its preservation, despite planning permission to demolish the building being granted two years ago.

Click here for a video clip, where former miners talk about how the rescue teams operated. The clip includes some newsreel footage of the Gresford Disaster.

CADW listed the building in August. Here is a report from the Wrexham Leader.

Demolition started during the consultation period anyway. Here is the owner's comment at that time.

Of course, he did have planning permission to demolish, granted by... Wrexham County Borough Council - although not the consent paperwork.

The demolition work came in two stages a few days apart during August. At the time Wrexham Council issued a statement which said: “The contractors who started the demolition work on Wednesday were advised they did not have the necessary demolition consent under the Building Act and in receiving this advice removed their demolition equipment from the site.

“It is therefore surprising and regrettable that they returned to demolish the building.”

Buy why did the council give planning permission to demolish the building and construct eight flats anyway? Didn't they realise that the building was of historic interest?

Another heritage issue came up in the news yesterday. This time is is the former steelworks at Brymbo, just down the road. Here is the Wrexham Leader report. Seems the site presevation/decay problems were pointed out a few years earlier, in 2006. So not new news really.

The steelworks has been closed for twenty years and the site has been regraded, cleaned up and built on, with new houses and blocks of flats. You can see a few of them if you search here with 'Brymbo' -

About six years ago, I seem to recall that preservation of the historic buildings of the steelworks site was part of the deal for Brymbo Enterprise Centre -

I remember being told that the old steelworks site would be turned into a visitor attraction similar to Bersham, with a cafe (maybe they meant the one at the Enterprise centre?). But that promise seems to have gone the way of the spine road that was a major part of the new homes plans being passed -

It really does feel like two villages - the old village and the disconnected "new town".


The fluctuating figures in these reports is so interesting. Early reports from 2002 metion

houses, recreation areas and business premises, creating between 750 and 1,000 jobs.

Clwyd South MP Martyn Jones said: "Eventually there'll be a road through from the A483 straight through to Brymbo.

"Through the site and on either side of it there will be factories and factory units, bringing jobs right into Brymbo itself."

Interesting. "Eventually" - hmm, I wonder how long that is. Other than building site work, there don't seem to be any of those jobs yet - or the factories. There was an 8.5million grant to clean up the site. And a share of 6million for Wrexham villages. Oh well, that was only 8 years ago.

According to this report in 1999, there were 1200 jobs lost when the steelworks closed and 300 new houses were going to be built. Later reports say 1000 jobs lost. Others say 6000 jobs lost.
By 2005, the new homes figure has gone up - there's going to be 500 new homes built. Uh, actually even within the report that managed to go up to 535! And "just 51 homes in total", more houses have been built on the other side of the Tanyfron Link Road (which was already there, in case you are wondering). Funny how Gordon Mytton's website doesn't mention the other 500 homes on the opposite side of the road. Mmm, that's at lot of new houses - isn't 586 nearly twice the original 300? And no sign of the shops and factories yet. These new houses all exit onto the A483 Wrexham bypass at the Ruthin Road junction, which hasn't been altered to cope with the extra vehicles (there's also a few hundred more new houses on the Wrexham side of Ruthin Road).

I am approaching my tenth Christmas in Brymbo. When I moved here, all these things were supposed to be imminent. Plus a few more - the Wrexham-Brymbo Cycleway (still being mentioned in point 4.9 of the Wrexham Gateway Western Development plan in 2004), something I was looking foward to very much in 2000, looks like it won't be constructed before I am too old to be pedalling a bike around here (so far, out of the "major development" outlined in 1.1, there seems to only be the housing element actually underway/constructed, plus a couple of roundabouts and a set of traffic lights on Ruabon Road). I sold the bike 2 years ago anyway! Apart from the site cleanup, regrading and compacting so the new houses and flats could be built (the test vibrations apparently also resulting in the houses along New Road, Lodge needing to be re-roofed - looks like many will be celebrating Christmas with their roofs incomplete), and what seems like the route for the spine road cut but abandoned, we are still waiting for the shops, jobs etc. And the heritage at the 200 year old ironworks is being allowed to decay...

A veiw across from Brymbo, in spring - 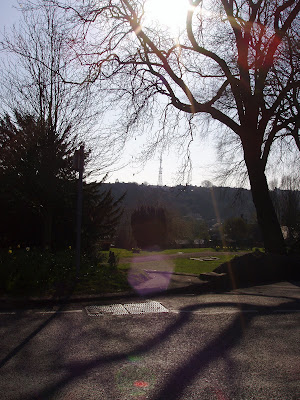