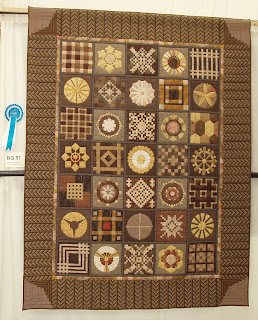 First there's a pic of my sampler quilt from 'Japanese Taupe Quilt Blocks'.  I called this the 'warm' sampler, referring to the fabric colours.  It won the Sampler Quilt Award, so that's the third time I've had it - I also won in 2009 and 2008. It is machine pieced, with hand applique and hand quilting.  I've entered it for the National Quilting Championships at Sandown Park next month, but want to add some more quilting before it is shown again.  As usual, it was a question of time. 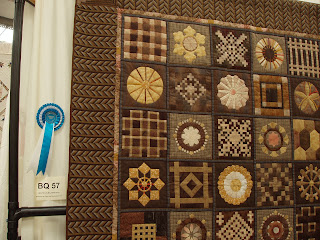 The second quilt is the one I made for the theme challenge, ' Go for Gold with Fire and Circles'. I called it 'We are the Champions'. It is machine quilted and embellished, with the 'flame' border done with a cording foot and a lot of sparkly fine braids.  The border fabric is the same batik Glyn used for his 'Mission Impossible' quilt in the background for the explosion.  I had to fudge one corner, because there wasn't enough left for a continuous metre square, so it's in pieces!  With the metallic crackle mesh overlay, it isn't obvious at all. 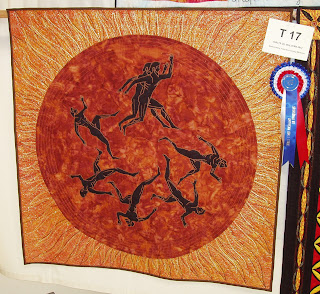 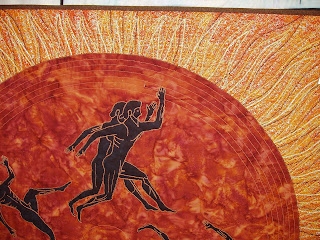 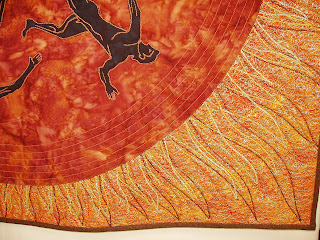 The figures are adapted from several ancient Greek vases.  The 30s polyester topstitch thread I used for the freemotioned outlines was a bit of a problem, as the machine really didn't like the first spool and it kept snagging up underneath.  Couldn't work out the problem - the spool seemed fine.  It performed better with the second and third spools (30m on each).  I only had a couple of days to work on this, so any glitches were not welcome. At least I got it finished. I wonder if anyone spotted that the binding on these two quilts is exactly the same? LOL 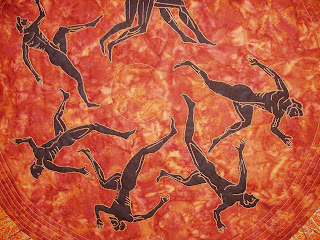 The winning theme quilt was by Sheena Norquay.  I admire her designs and her machine quilting is fantastic.  We were lucky to have Sheena as one of the speakers at the Quilters' Guild AGM in Dundee a few weeks ago.  This quilt is just amazing - click the photo to see it in more detail (there's a LOT of detail in this piece).

Reiko Domon and quilters from Peaceful Heart Quilt Group and Yuza Sashiko Guild have sent an exhibition of their quilts which will be touring with the Grosvenor quilt shows this year.  Unfortunately Blogger won't let me put all the photos on this post, so I'll have to try to add them to another post later. First, here are some of Reiko's quilts - 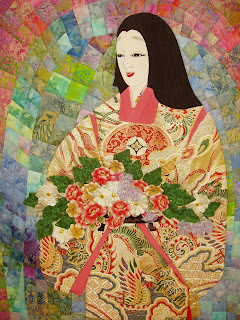 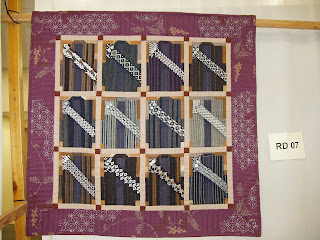 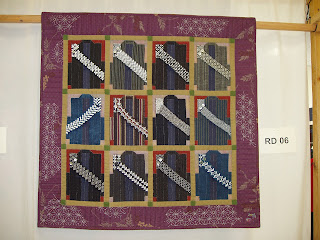 Some general views of their exhibition space - 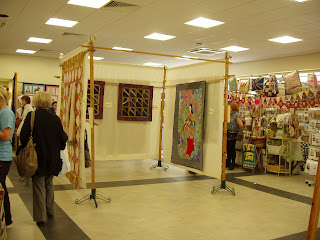 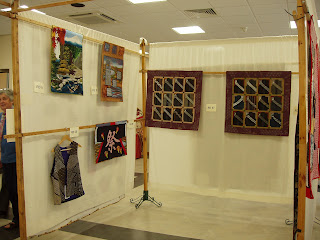 I only got one photo of my stand (I left my camera at home until Sunday - oops). This quilter had made a super version of the Rice Sack Bag from '21 Terrific Patchwork Bags' using African fabrics and the patchwork design 'French braid' for the main panel. 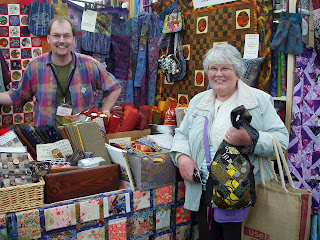 We had a good time at the show, although I was so busy, I didn't really have much chance to see the quilts and feel like I must have missed at least half the show.  Hopefully there will be a bit more time for quilt viewing at Sandown Park later next month!

Note - Blogger's new photo uploader doesn't make it easy to get pictures onto my blog in quantity!  There are several photos it just doesn't want to upload, despite several attempts.  So annoying!  It also keeps altering the alignment of text and photos from centre to left when I don't want it and reversing this when I do.  I wish they'd bring back the old blog posting page.

I'll be going to Sandown on the Sunday ( to collect my entry, the first for a while). Look forward to seeing Reiko's quilts!!