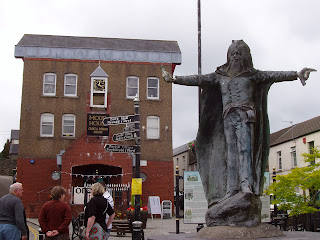 A few photos from the Textile Extravaganza held at Model House, Llantrisant, near Cardiff, on Saturday and Sunday. It was a round trip of nearly 1,000 miles for us, but well worth it.  I met so many interesting and creative people, including Richard Weston, 'the scarf man'. Shibori artist Michelle Griffiths, who is now based at Model House, had invited a cross section of different textile makers, so we had many aspects of textile work on display and being demonstrated, from spinning and weaving to embroidery, patchwork and sashiko (me).  There were displays by the Glamorgan Guild of Spinners Weavers and Dyers and Helen Foroughi of Fibre Art Wales, plus Laura Thomas had her weaving studio open.  Felicity Warnes, 'The Old Bookshop', brought a tempting array of specialist textile books (I think everyone went home with some new acquisitions, although Michelle probably beat the lot of us). Spinning demonstration - 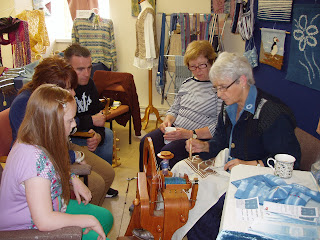 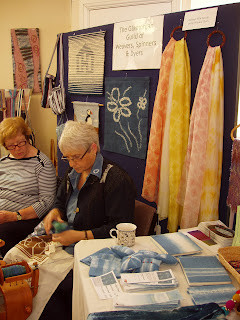 It was hard to believe that less than 48 hours before the opening, builders had been in demolishing partition walls and opening up Michelle's gallery space. 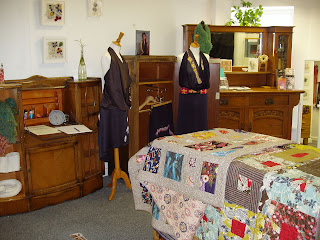 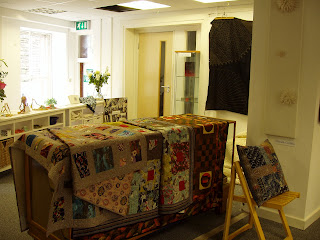 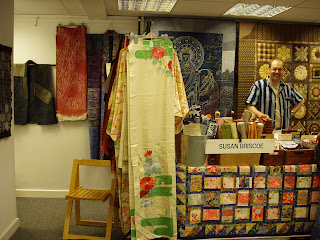 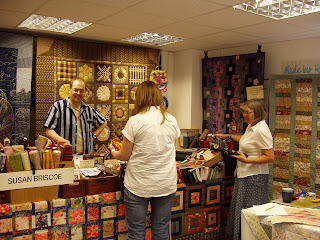 Glyn ended up as an impromptu model for an obi musubi demonstration - I did a variation on a woman's bow using a fukuro obi, because I didn't have anything narrower to hand. 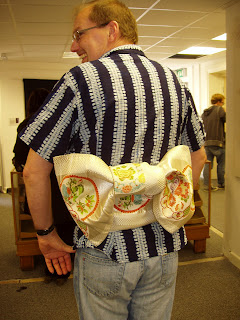 Hopefully this will be the first of many Textile Extravaganzas at Model House.  I have been discussing doing some collaborative work with Michelle and also the possibilities of exhibiting at the gallery, perhaps creating some new work based on ideas I've had in my sketchbook for several years.... watch this space!
Posted by Susan Briscoe at 19:52