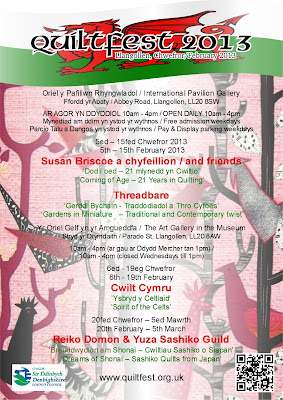 We had some suggestions re the Quiltfest flyer design today, via the Quiltfest website, so I thought it might be useful for you to know why the flyers look like they do :-)  Two points were made -

1) The back ground is far too busy to make it easy to read the writing even though it is faded in the middle.

2) Mixing the english and welsh language together on both sides is not a good idea, it makes it too difficult to find the right bit to read. It would be much better to have welsh on one side of your flyer and english on the other. 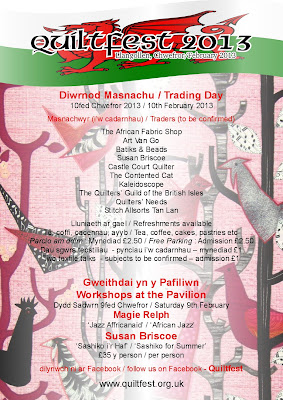 Here's my reply -
We need to have the flyers in Welsh and English for several reasons.  Our main venue, the Royal International Pavilion, is run by Denbighshire County Council and they have a bilingual policy.  If we are to have any chance of the council promoting our event, we have to have bilingual flyers.  Another reason is that if we want to have our flyers in places like the local Tourist Information office, it needs to be bilingual, or it won't get displayed (the size of the Tourist Information brochure holders also dictates the A5 format).  Additionally of course, quite a few of our visitors are Welsh speakers and this year one of the groups we are featuring, Cwilt Cymru, is a Welsh group.
There is a lot of information we need to fit onto these flyers, so for the 2012 flyer and the 2013 one we have gone with a bilingual layout, which is pretty standard for presenting the two languages together.  Having the bilingual layout, rather than Welsh on one side and English on the other, means there is less repetition in the combined text.  If we had one side for each language, things like the names of the exhibitors and the traders on Trading Day would have to be repeated, and there would be so much text we would either have to miss off important information or have much smaller font sizes.  There is much more information to be included on the flyers than there used to be, as we now have two galleries included in Quiltfest, which have different opening hours and different change over dates for their exhibitions as well - all info that has to be fitted in somehow.
The 2012 flyer was done in a similar style to next year's, with the text floated over the background image of one of the exhibits, and we were lucky to have a professional graphic designer donate the design work free of charge (Ferret's other half Tet).  He also designed the header logo for us.  Each year we have tried to select a quilt that would make a striking image - hopefully something that would attract non-quilters as well.  The 2012 flyer had a white border around each part of the text, but my graphics programme wouldn't allow me to do the same effect with this year's flyer, so the central fade out was the best we could do.  Without floating the text over the image, we could only have exceptionally small quilt images on the flyer - about the size of a large postage stamp.
Here's last years flyer as a reminder of the design - 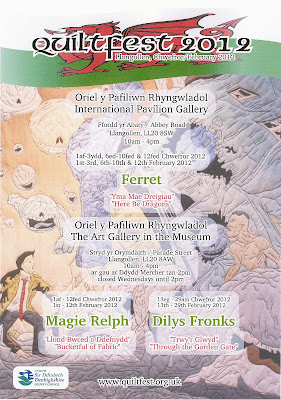 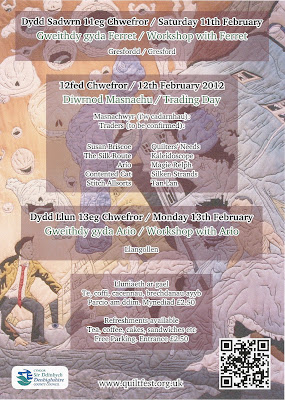 Of course, every year's flyer is different so we will see what we can do next year to improve the design and layout!