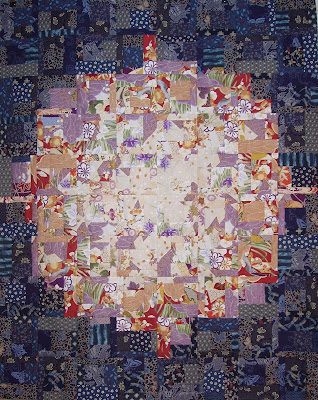 Finished this quilt top yesterday - one of the new pieces for Quiltfest.  It's based on the Japanese Circles and Squares block.  The centre section is one Kona Bay fabric, cut and graded from light to dark, while the background is a mixture of various Japanese blue 'traditional' prints including pieces from my scrap box - the largest was a fat quarter while the smallest made just two 3 1/2 in x 1 1/2in strips.  The red in the central print and the touches of red on some of the indigo blues are the same red.

The centre fabric is actually more than one fabric, because I only had a metre of the main print, a very large scale print with irises and plum blossoms.  I really needed 1.5m of this, so I had to delve in the scrap box again. I added the light print with maple leaves, which had a similar background colour, with the leaves in the same purples as the irises. 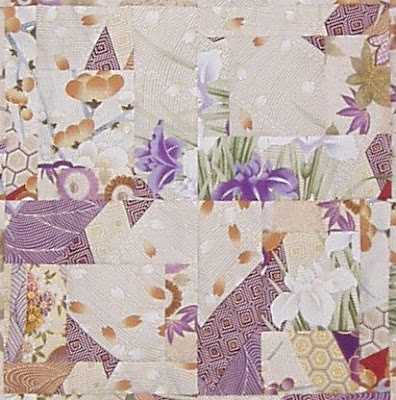 The outer areas of the centre also have several extras in there - a print with ivy leaves in green, cream, purple and red; a purple & blue colourway of the main print; a maple leaf print with a dark purple background, lighter toned fan papers and faux shibori dots; a purple & cream wave print with smaller maple leaves.  I kept these to the narrower pieces whenever possible, so it isn't obvious.  Since the main print was on such a large scale, it was possible that these prints could be another part of the design.  Sticking to the same colour palette and similar motifs did the trick. 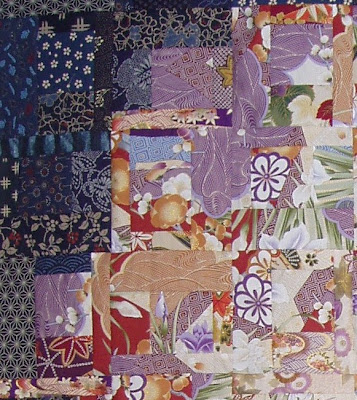 I will machine quilt this, with a large circle superimposed on the central section, quilting the blue background in concentric circles in black thread to darken the fabrics even more and using a lighter thread, probably shaded, for the centre.  It will be one of the new pieces at Quiltfest in February.
Posted by Susan Briscoe at 09:55

The quilt looks great and is a wonderful illustration of how a design can look so very different depending on the fabric/tones used. Happy quilting.