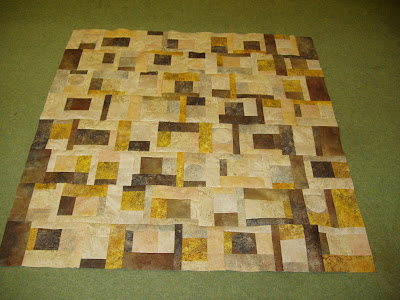 I finished piecing the stone patchwork on Friday.  In the end, I moved the alternate rows across by half a block by adding extra 3 1/2in strips at the sides.  This got the extra random effect I wanted from what is a series of identical blocks.  If I had realised that I needed these extra pieces before I cut out the circle appliques, I could have got one extra piece from each of the eight fabrics, but I'd gone ahead and cut as many as three circles from some of them, so there wasn't enough left.  I ended up cutting six pieces from the brown stone print I had planned to use as a 'sill' and 'lintel' at the bottom and top, with one yellow piece and one 'marble' piece too.  With the extra side pieces, the quilt had got too wide for those long strips anyway.  I have some Stonehenge yardage, so I might see how it looks with that. Here it is with all the blocks arranged ready for sewing - here's my earlier post. 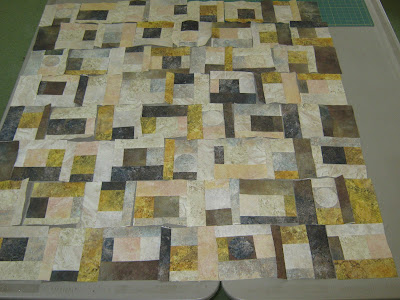 I think it looks much more interesting than the usual grid layout (below).  In addtion to the seams at the edge of neighbouring blocks alternating between sides and top/bottom, so the seams never need to match up exactly, the seams between one row of blocks and the next don't match up either. I'm going to hand quilt in the ditch, as there are few long seams lines to follow if I machine quilted. I did mark the centre of each block at the edge, so I could match it up with the seam on the next row, because I didn't want the rows creeping out of alignment.  I think the layout below, the grid, could work with busier fabrics. 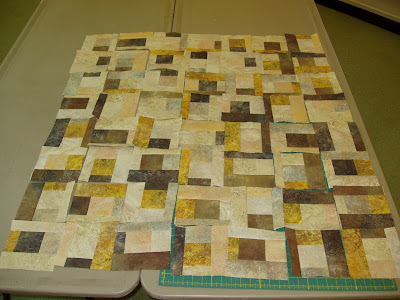