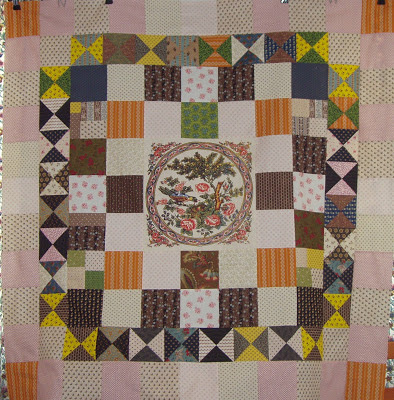 The Sidmouth quilt is one of those featured in the current exhibition at the Quilt Museum, York - 'The Blossoming of Patchwork', on until August 31st.  I think the first time I saw a photo of it was while browsing the collections online.  The quilt looked like another early nineteenth century medalion quilts that would be interesting to make, with scope for using lots of reproduction fabrics.  While the design appears mainly symmetrical, it has all kinds of quirks in the way the simple blocks are arranged, which make it very appealing. It also looked like it had the potential for a remake in more contemporary fabrics. So it was 'on my list'.

When I heard that the Museum shop had just launched a reprint of the centre panel, the problem of what to use for the centre was solved.  Rather conveniently, they edited the scan from a duplicate the orignal panel to make the central motif circular rather than oval, which made the maths easier to work out for the borders.  The unquilted version of the centre panel in the Museum's collection is still bright and fresh, with the greens (then made by overprinting yellow with blue) unfaded.  It sets the colourscheme for the rest of the quilt - include lots of bright reproduction prints.  When I saw the quilt in the current exhibition, the colours in the fabric prints seemed even more vivid than I'd imagined from looking at the online photo.  For example, the pieces that I thought were madder dyed blood reds turned out to be bright Turkey red prints, so I had to rethink my fabrics a little.

There's an excellent article about how the repro panel was produced in the summer issue of 'The Quilter' (the magazine of the Quilters' Guild of the British Isles) and there's also a 'chintz challenge' on the Quilt Museum's Facebook page.  It will be interesting to see what people make with it.

Finding an orange print stripe for the cornerstones in the centre wasn't easy.  After looking online and at every trader at Festival of Quilts, I still hadn't found the right colour of stripe.  There were plenty of similar stripes in red, brown or blue, but not in orange or rust.  If you click the first link in this post, you can see the image of the original quilt on the Museum's website and I think you'll agree that it needs that touch of orange in the cornerstones to help frame the centre. I asked several quilters online if they could send me in the right direction for something similar (the online quilting networks are great sources of information) and Kathie at Inspired by Antique Quilts came up with just the right thing.  You can see it in the photos below.  She wrote that it was an early fabric line from Baum, who eventually became Windhams (very well known for their repro fabrics).  I don't know how early is early, but I'm guessing 1980s?  Kathie had a small piece which was just enough, so I have been able to get started.  Thanks VERY MUCH! 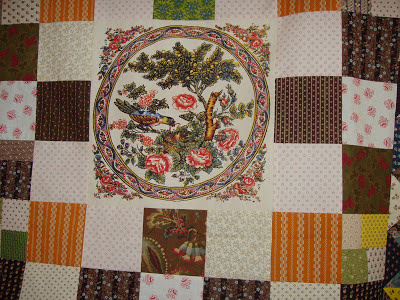 The original has lots of tiny prints on white backgrounds, which 'read' as pink or beige, so I've added plenty of these, plus some vivid yellows and 'poison' greens. I haven't always been able to find something that is correct both in colour and pattern, so I've tended to go for something that works in a similar way, prioritising colour over pattern. For this version, I've included some of the very scrappy piecing that's in the original, like the irregular four patch cornerstones above.  I would like to try making a black and white contemporary version, using a cushion panel for the centre print, but if I do, I'll make units like the four patch blocks more regular.  I want to quilt my first version with a similar design to the original and made notes when I was at the musem, but of course the prints make the elaborate quilting very hard to see from the patchwork side - I haven't seen the back.  The quilting motifs are very similar to Welsh quilting designs, and include beech leaves and tulips.
Posted by Susan Briscoe at 16:07

I love this quilt and oh that center panel is just beautiful
I really look forward to following your progress on this quilt.....
Kathie

Thanks very much! It is something I can get on with as time permits at the moment, working up each border in turn. I'm really enjoying figuring out the fabrics. Hopefully I'll be able to take it to the Quilt Museum and see how it looks against the original - that will be interesting!