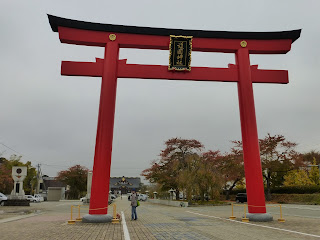 The end of 2013 ended up busier than I thought, so I haven't had a lot of time to post on my blog.  There are still a lot of photos to be added from my trip to Japan in November and more photos from workshops etc. taken since then.  In the meantime, Happy New Year 2014! The photo above was taken at the Gokoku Shrine in Yamagata city in November, and the one below, borrowed from Kazutoshi Fukase, shows it earlier today, as food stalls were being set up in preparation for hatsumōde, the first shrine visit at New Year. 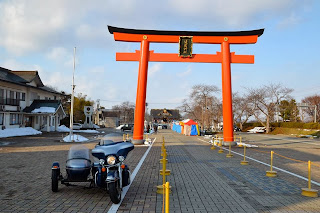 There are several exciting projects to announce for 2014.  The first one is that Yuza Sashiko Guild members will be visiting the Loch Lomond Quilt Show in May.  Airline tickets and hotels are all booked and we are looking forward to their visit very much indeed. Immediately before the quilt show, I will be going to Japan, so this time I am looking forward to seeing the cherry trees in bloom inYamagata again.

The second item is that I am working on a very interesting patchwork block project with the Quilters' Guild.  More about that later!