Yuza-machi visit part 3 - out and about in Sakata etc. 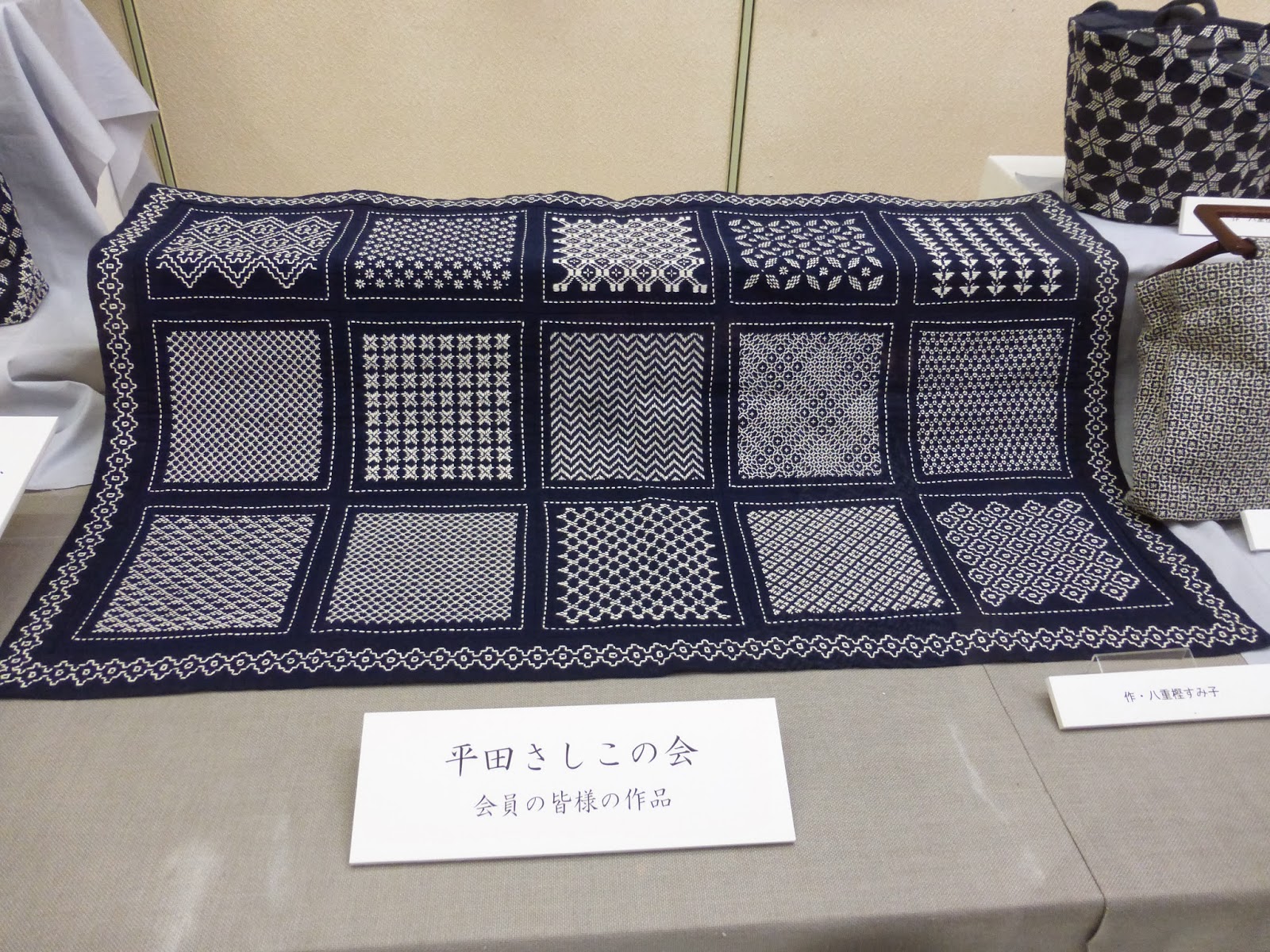 I used to go to Sakata city a lot when I lived in Yuza.  Some parts of it have changed a lot - there are big retail parks on the outskirts and some of the big shops I used to go to (like the Jusco and Daiei department stores, which had good craft/sewing departments) have been demolished - but there are always new things to discover.  During my trip in November, we went to Sakata several times, including to the city museum, where we saw a display of Shonai sashiko by the Hirata Sashiko group.  When I began stitching Shonai sashiko, the only reference materials I had were samplers stitched by Chie Ikeda and Hirata Sashiko's book (published, I think, by Hirata town council and not easy to get hold of). 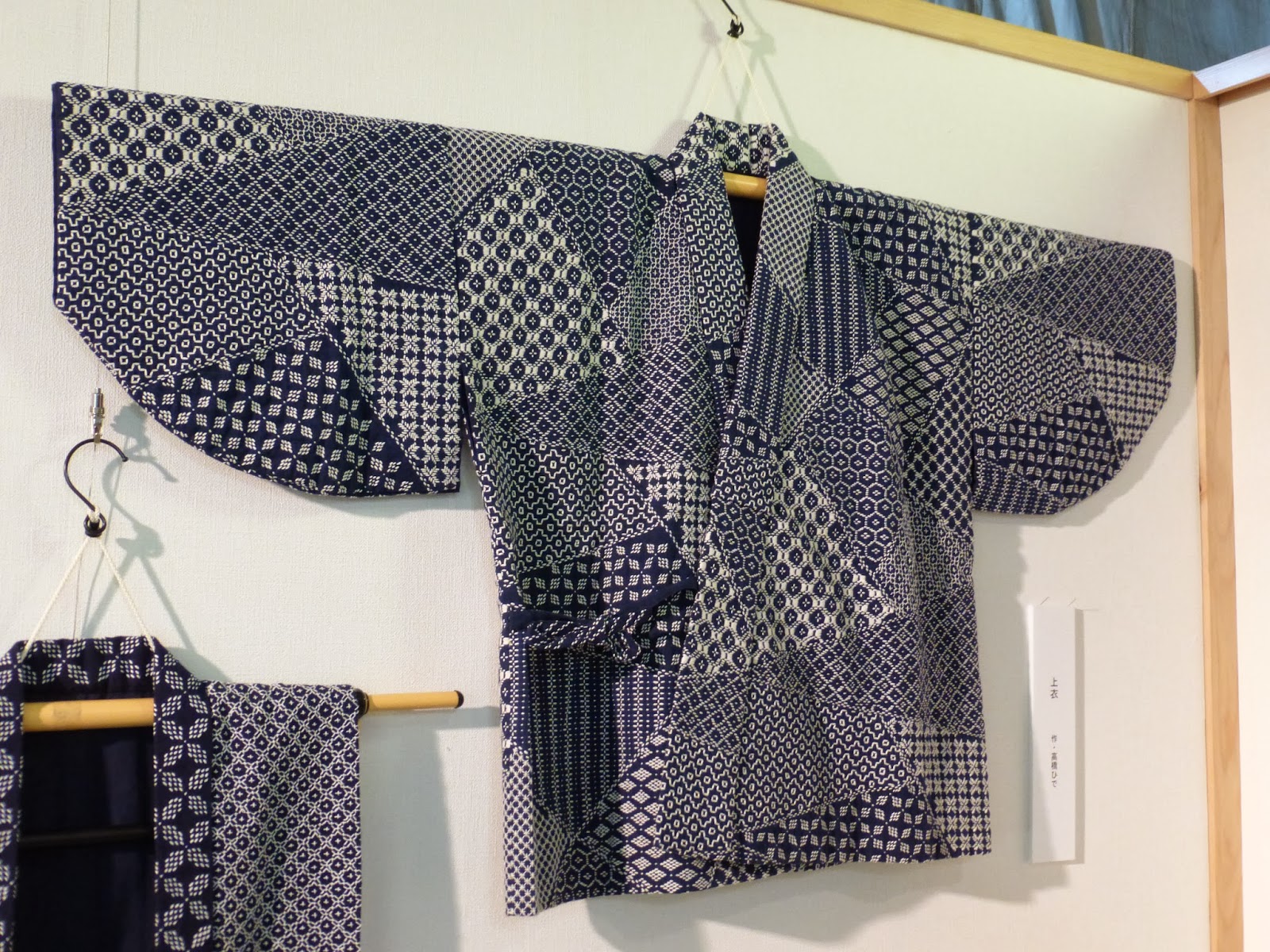 Shonai sashiko includes stitches which are popular throughout the region - Yuza sashiko is a sub group of Shonai, as some stitches were only worked in the area around Yuza and would have been invented by sashiko stitchers who lived there.  The same is true of other areas.  For example, the horizontal band pattern on the bag below is a stitch pattern from Hirata, where it is just called 'our stitch'.  The Hirata pattterns are all hitomezashi (one stitch sashiko) too. 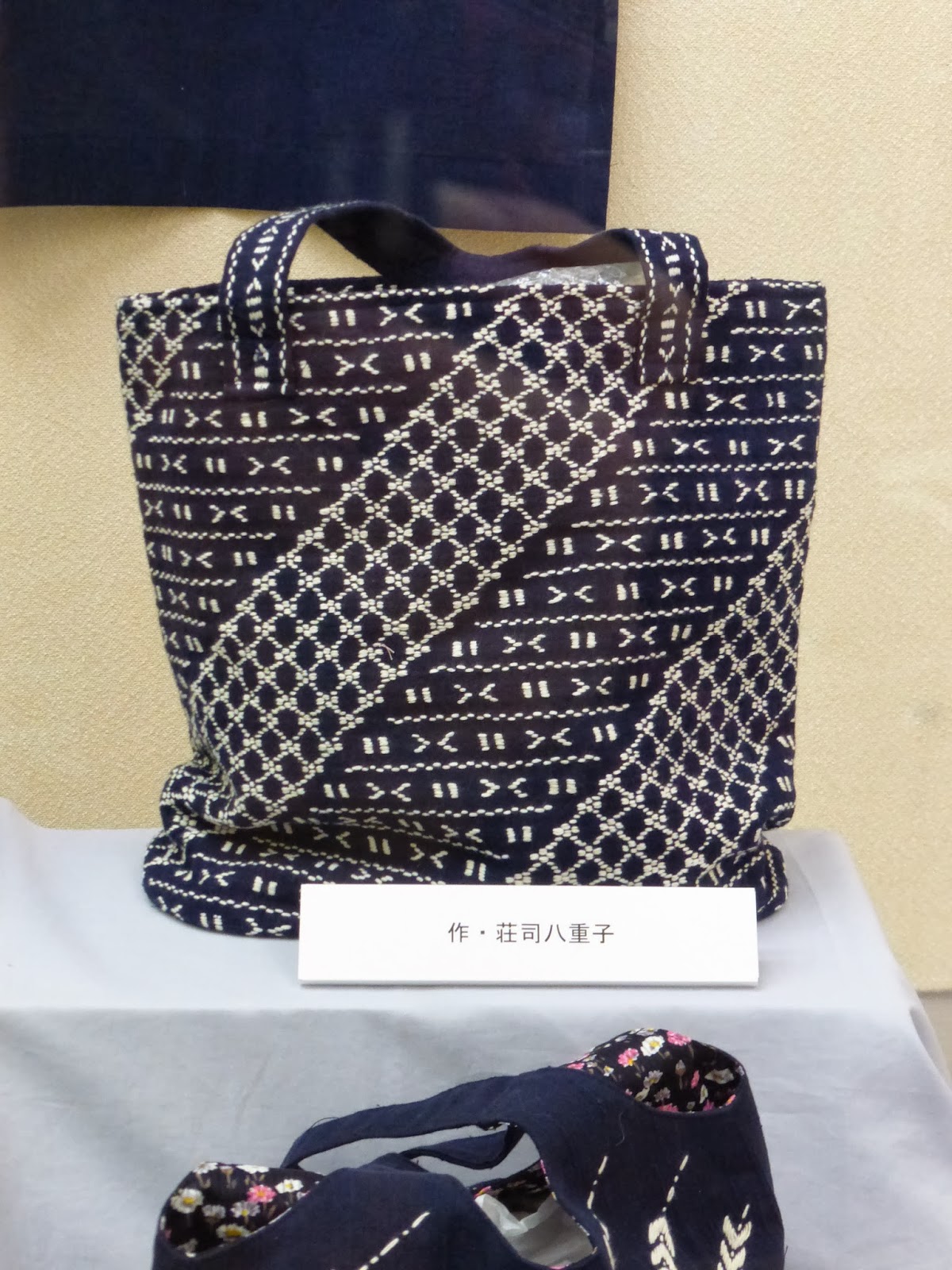 When the museum staff spotted that there was an English speaking visitor in the group, they got their English language sashiko book from the office to show me.  We were very amused because it was my book, 'The Ultimate Sashiko Sourcebook'!  Here I am with Reiko Domon and Chie Ikeda, in front of more Hirata sashiko.  There were many more pieces in the exhibition than I have shown here, so it would be worth a visit. 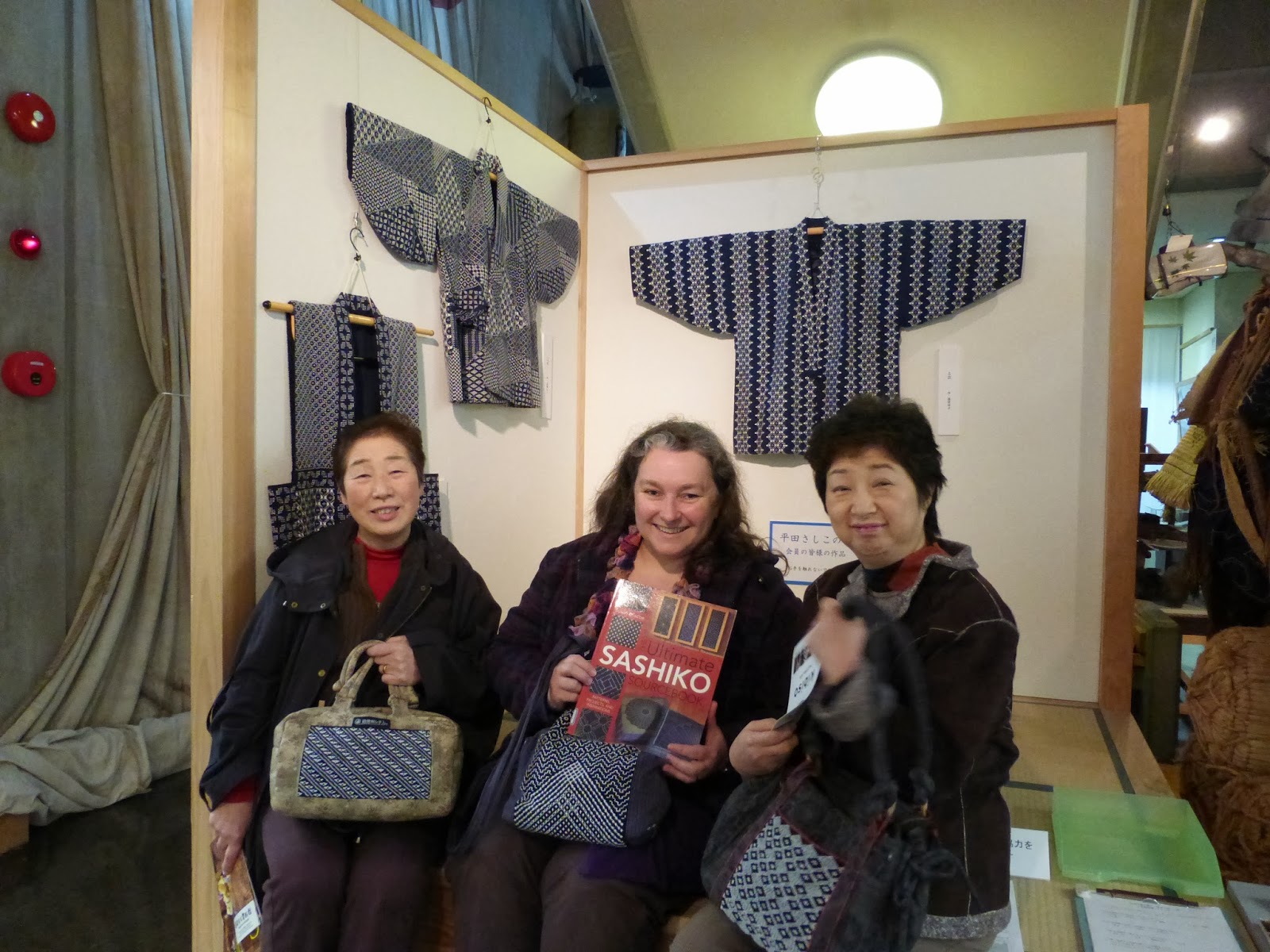 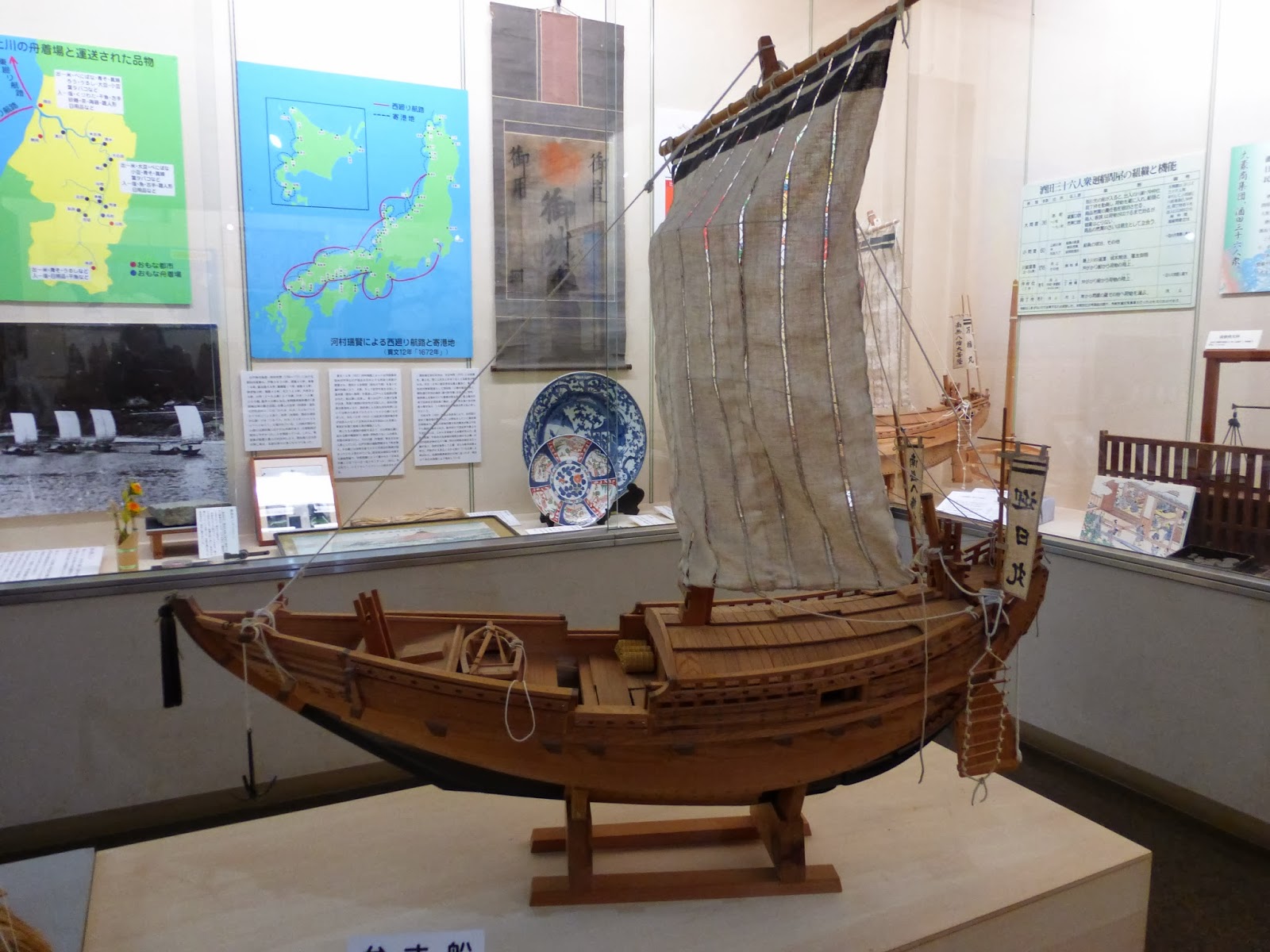 The museum has many other interesting items illustrating the long history of the area, including some wonderful model boats (above).  These are the kitamaebune (north front ships), which traded between Shonai and other parts of Japan, notably the Kobe/Osaka area and Kyoto.  Shonai and Yamagata were prosperous areas even in Edo times, because they produced high quality goods for trade - rice, safflower, and various handmade goods, like the famous Sakata tansu chests.  Some of the items in the museum are much older than that, as the area has been inhabited since prehistoric times.  The pots below are Jōmon
era. 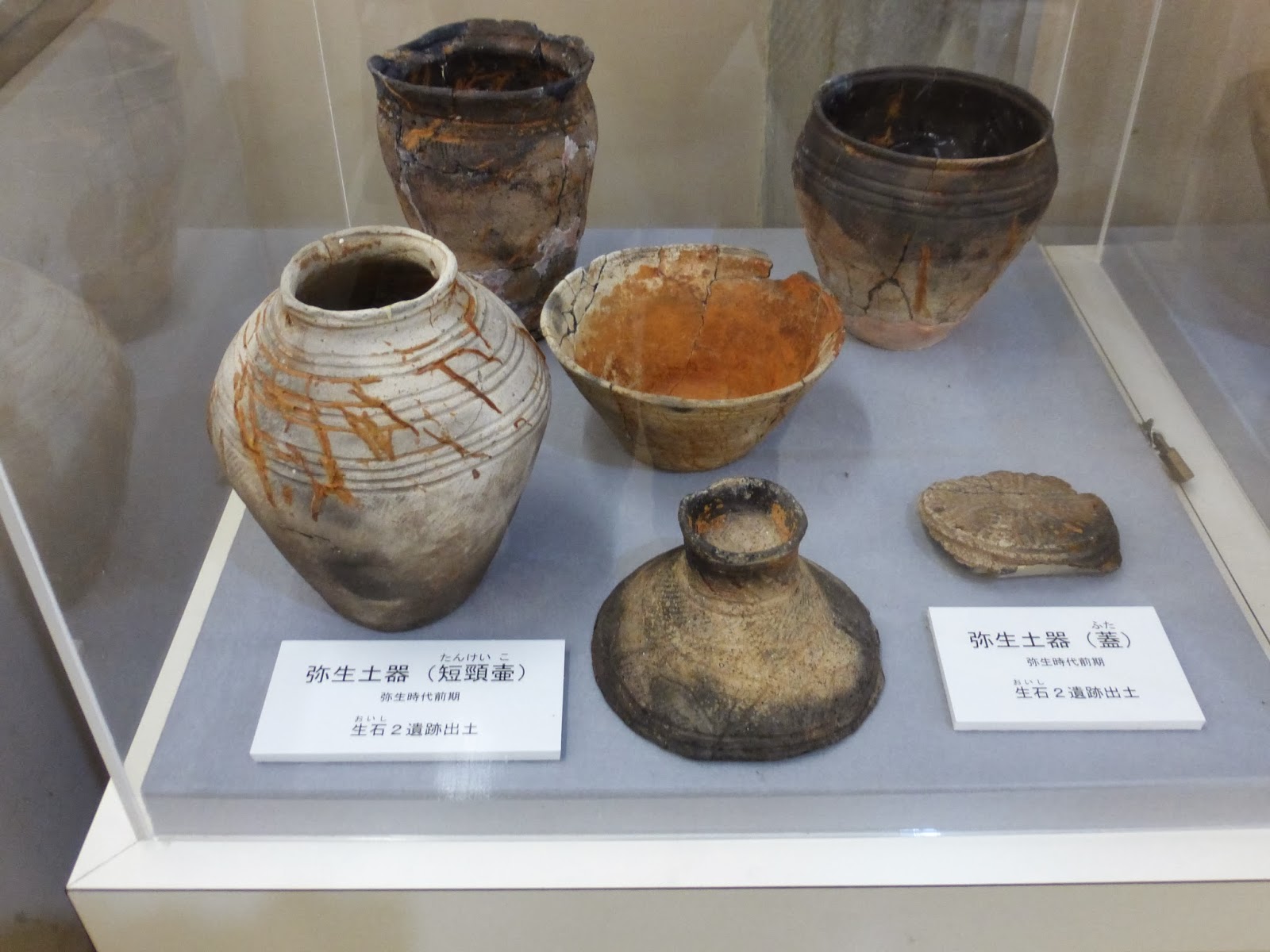 I also needed to do some shopping in Sakata - buying the special dark blue 'koniro' (very dark indigo) cotton cloth used for Yuza sashiko.  We went to a small kimono shop in the northern suburbs of the city, I think near Hikarigaoka Park (I don't know Sakata very well these days, especially as parts of it have changed a lot, so I loose my sense of orientation quite quickly!)  As well as the Yuza sashiko cotton, I bought four bolts of wool kimono fabrics - the colours and patterns were irresistable. 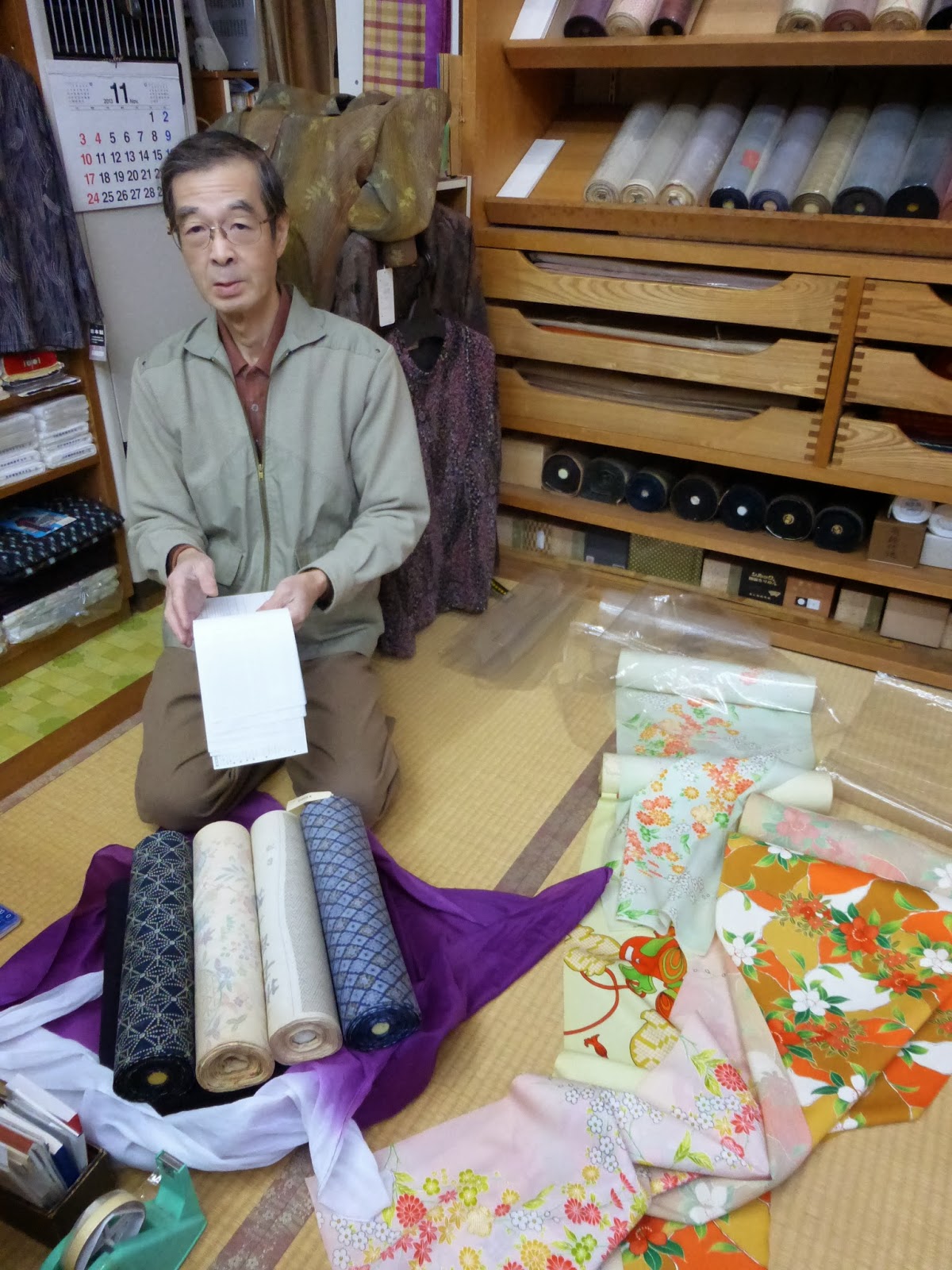 We visited the great Buddha of Sakata.  This is the second great Buddha that was created there and is made of bronze - the first one was iron, and was melted down during WWII.  Munenori Otaki, the priest at the temple, told me the story of how the Buddha was made, first by his great (?) grandfather and then remade by his grandfather. There is an information panel next to the statue which I thought I'd photographed, but I don't seem to have a picture of it.  I can't find any information on the internet either, which seems rather strange, as it is a well-known statue.  I hope the photos will give a sense of scale. 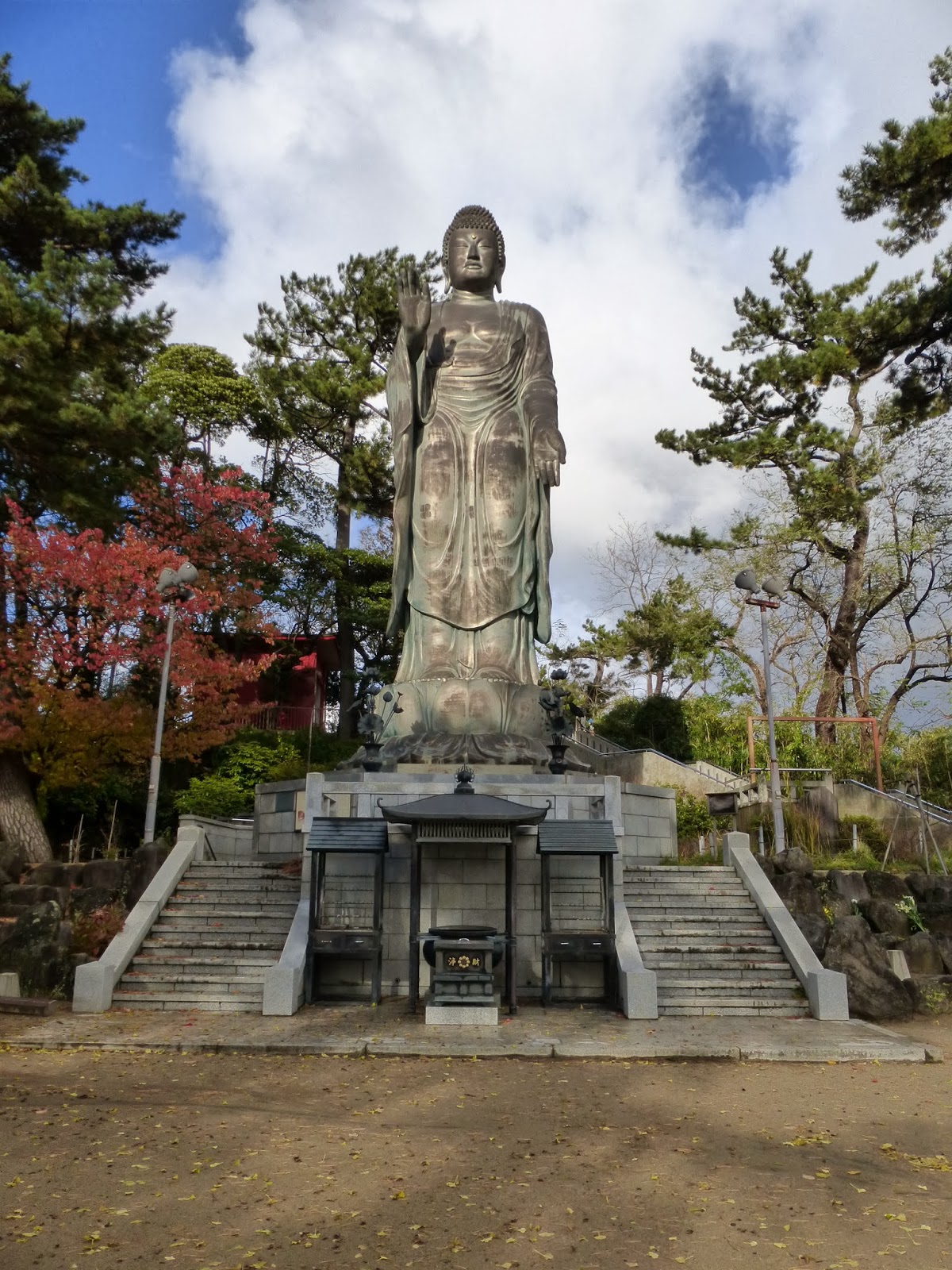 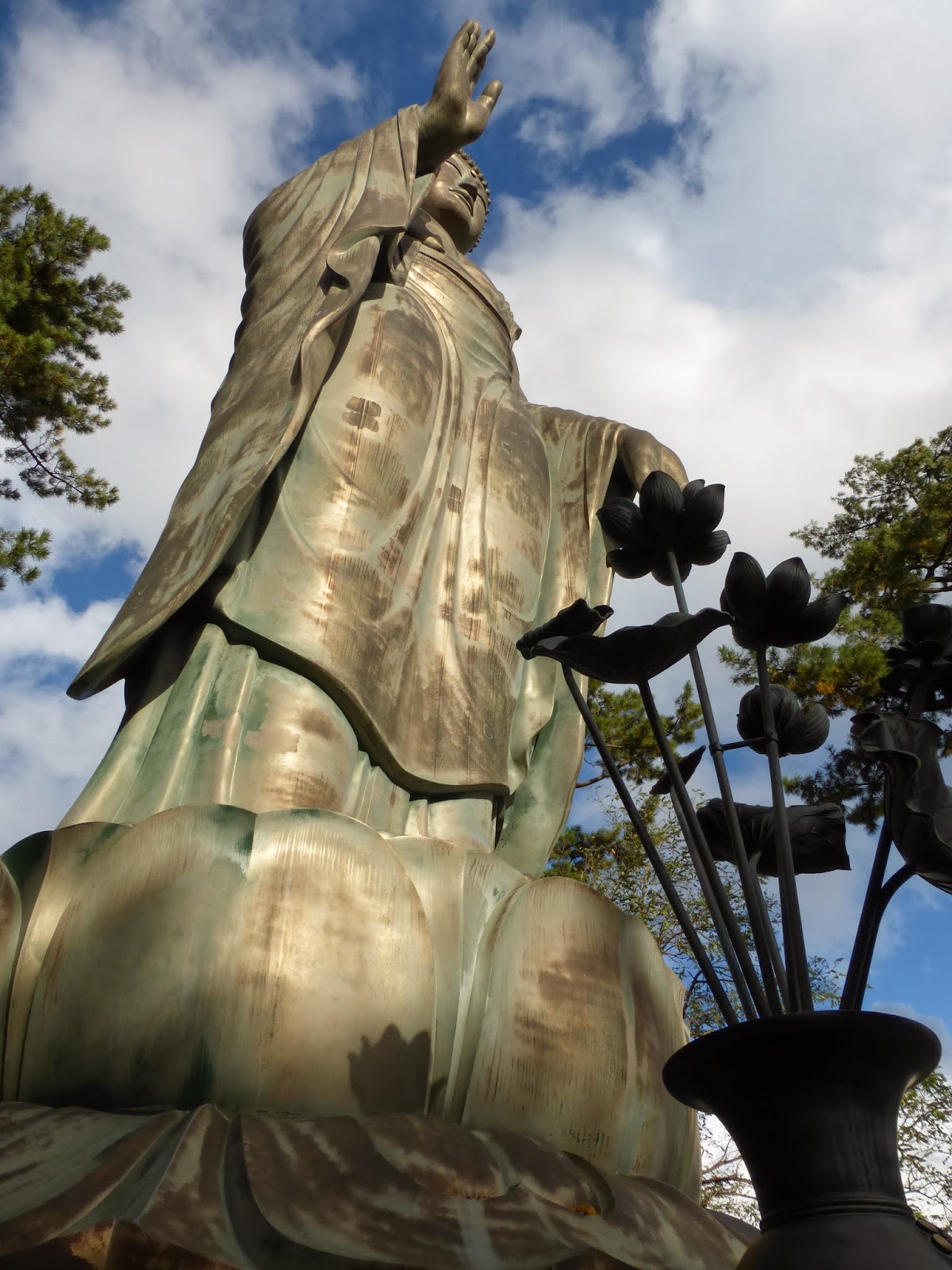 We also visited the 'Sanno Club'.  This interesting building was a restaurant in Meiji and Taisho times, where the local geisha entertained.  In the gift shop, there were some koginzashi displays.  Kogin is the counted sashiko from Aomori prefecture, which takes its name from koginu, a kind of work jacket. 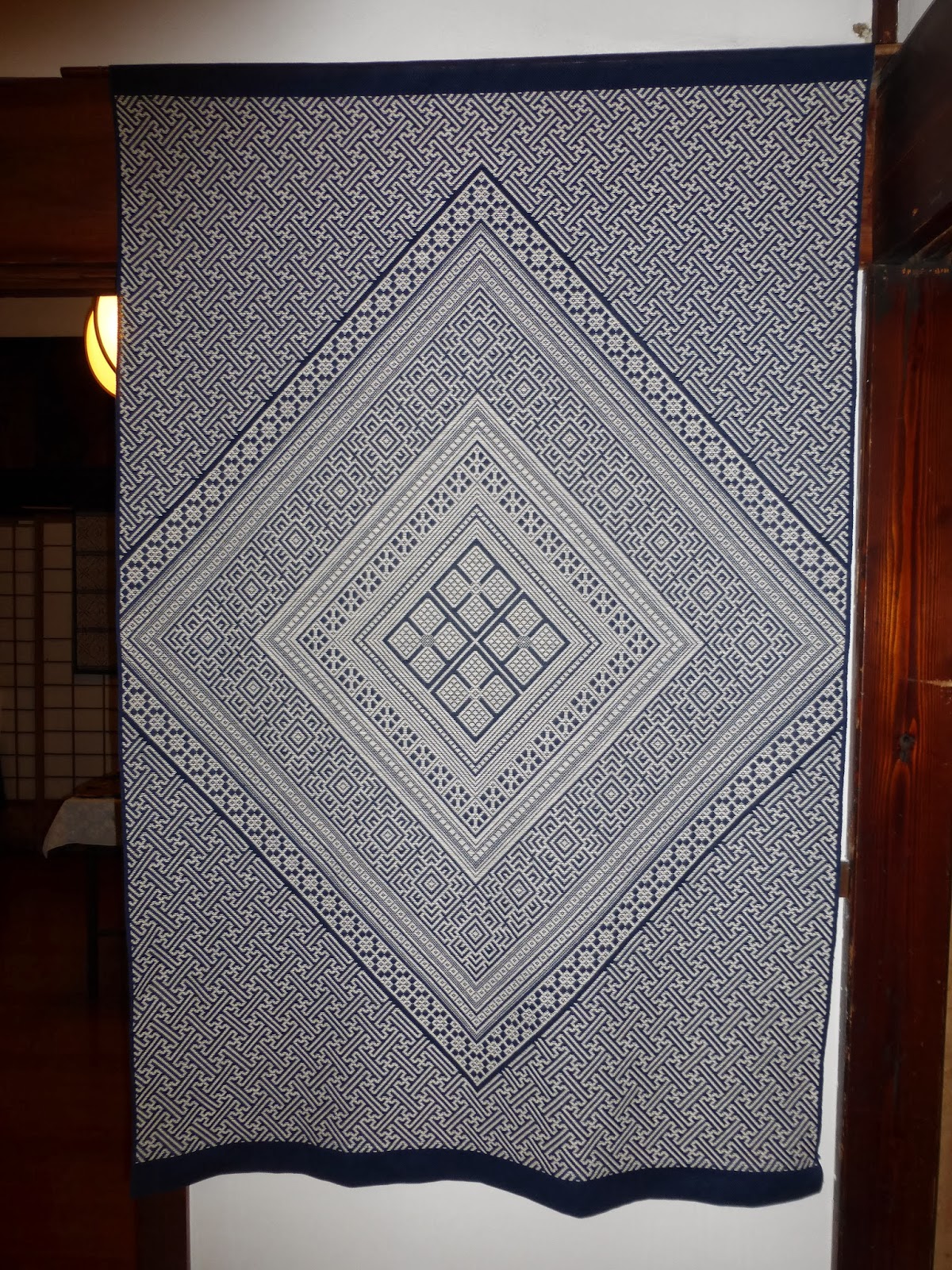 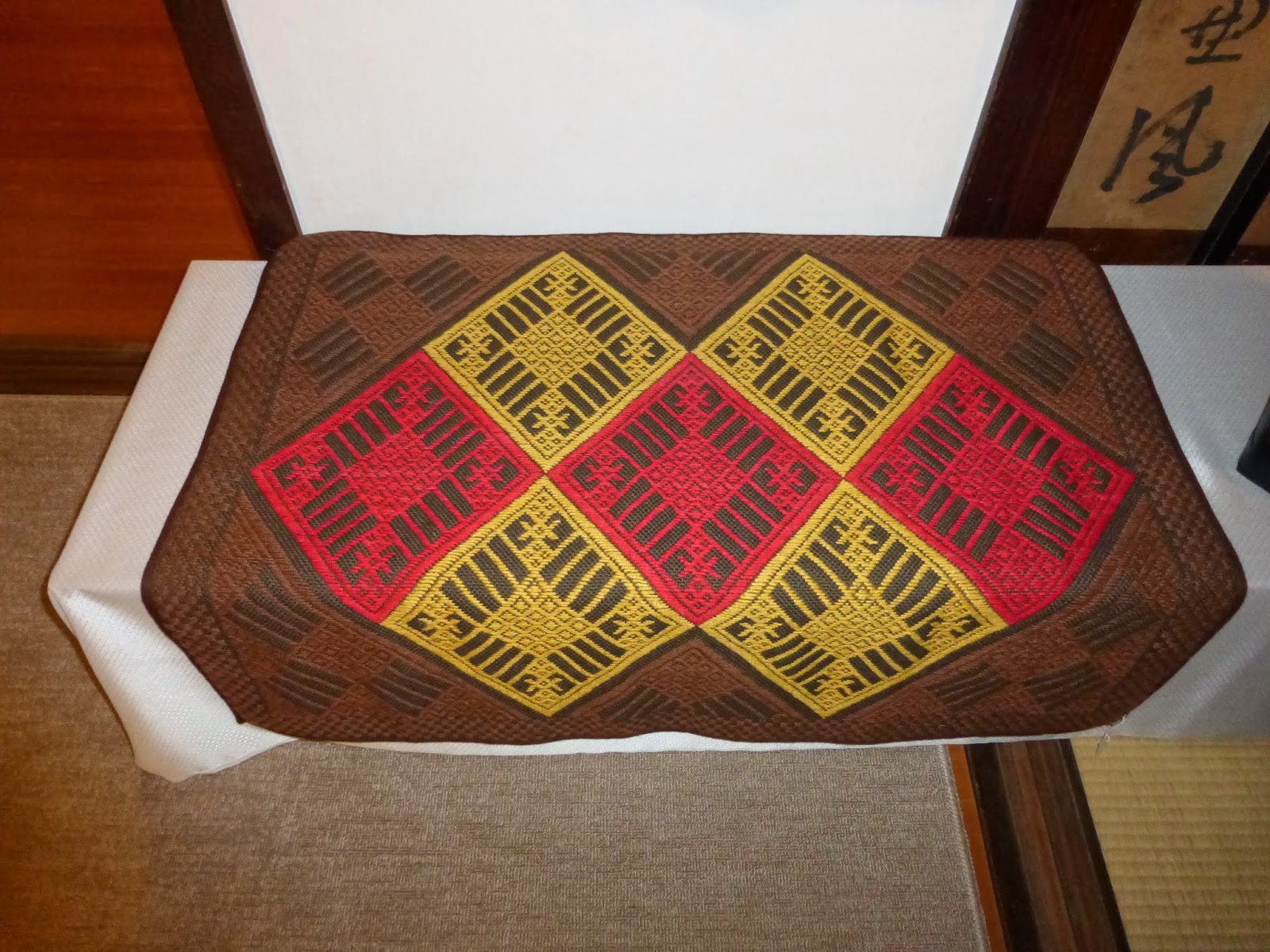 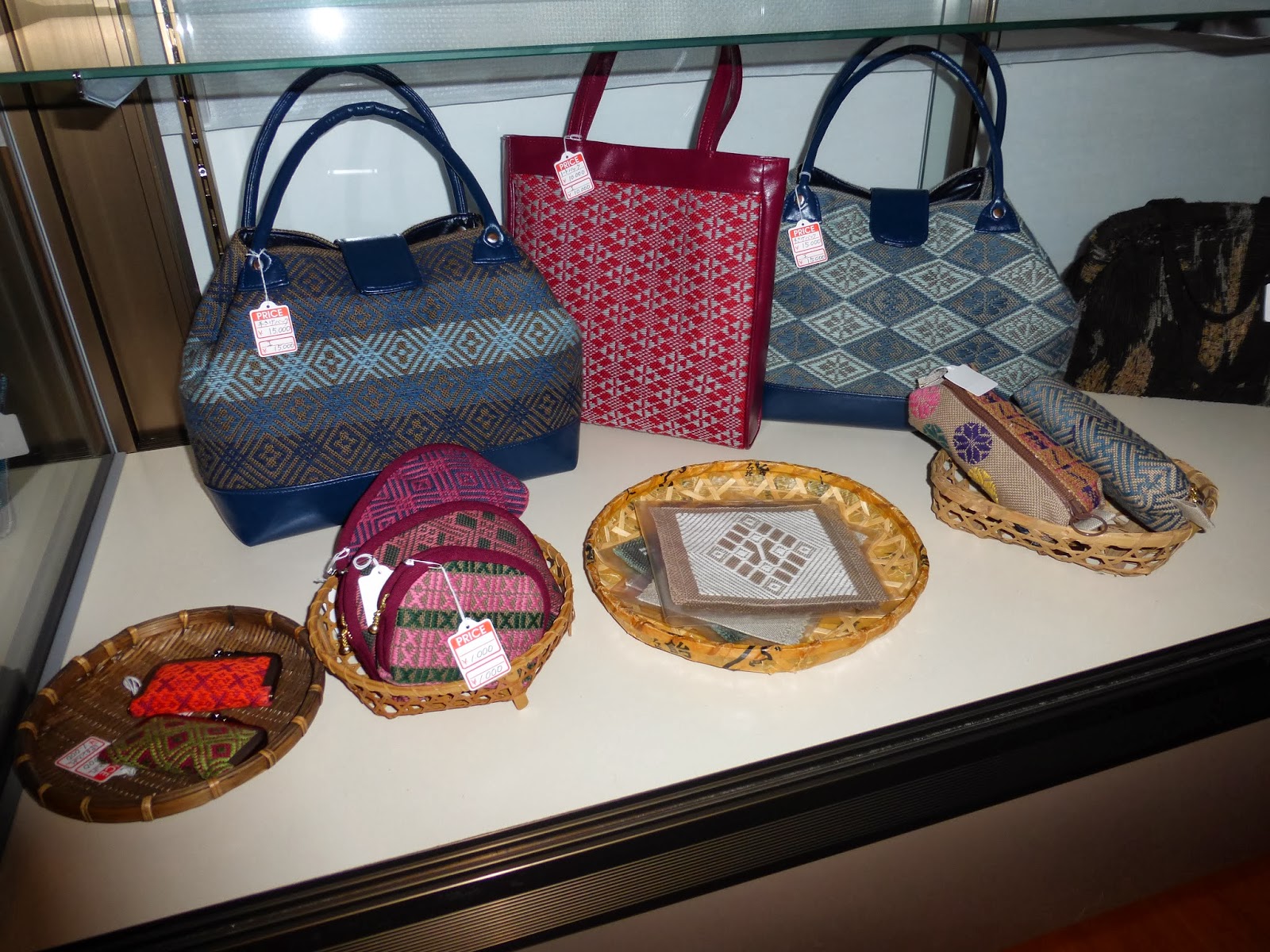 Yumeji Takehisa, a Japanese artist of the Taisho era, visited the Sanno Club many times.  You will probably know some of his works, as he is popular today.  The cartoons below must have been sketched at the Sanno Club. 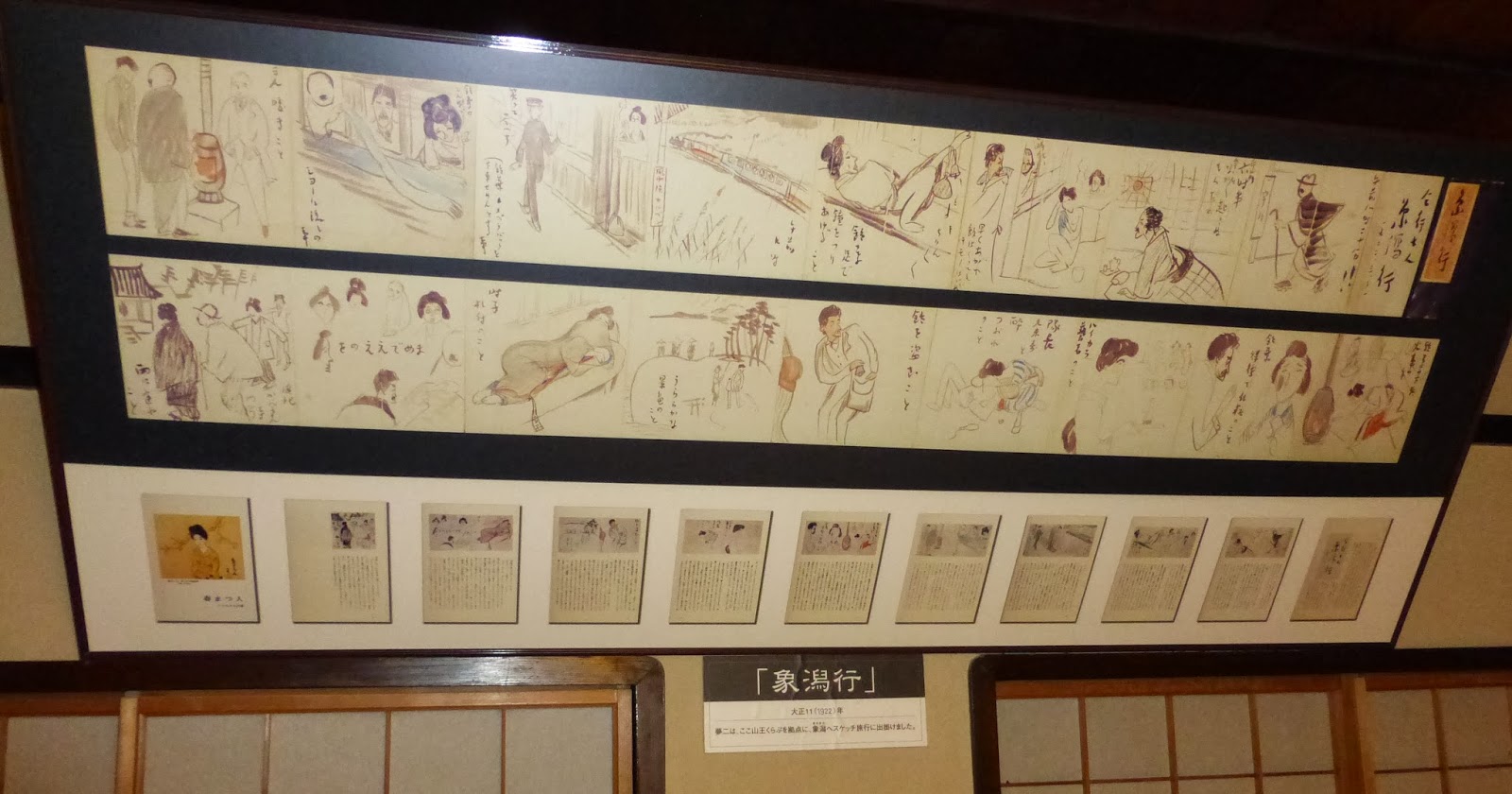 Some of the rooms are set out just as they would have been in the Taisho and early Showa eras, giving an impression of how the club must have looked.  I imagine it would have been a very lively place. 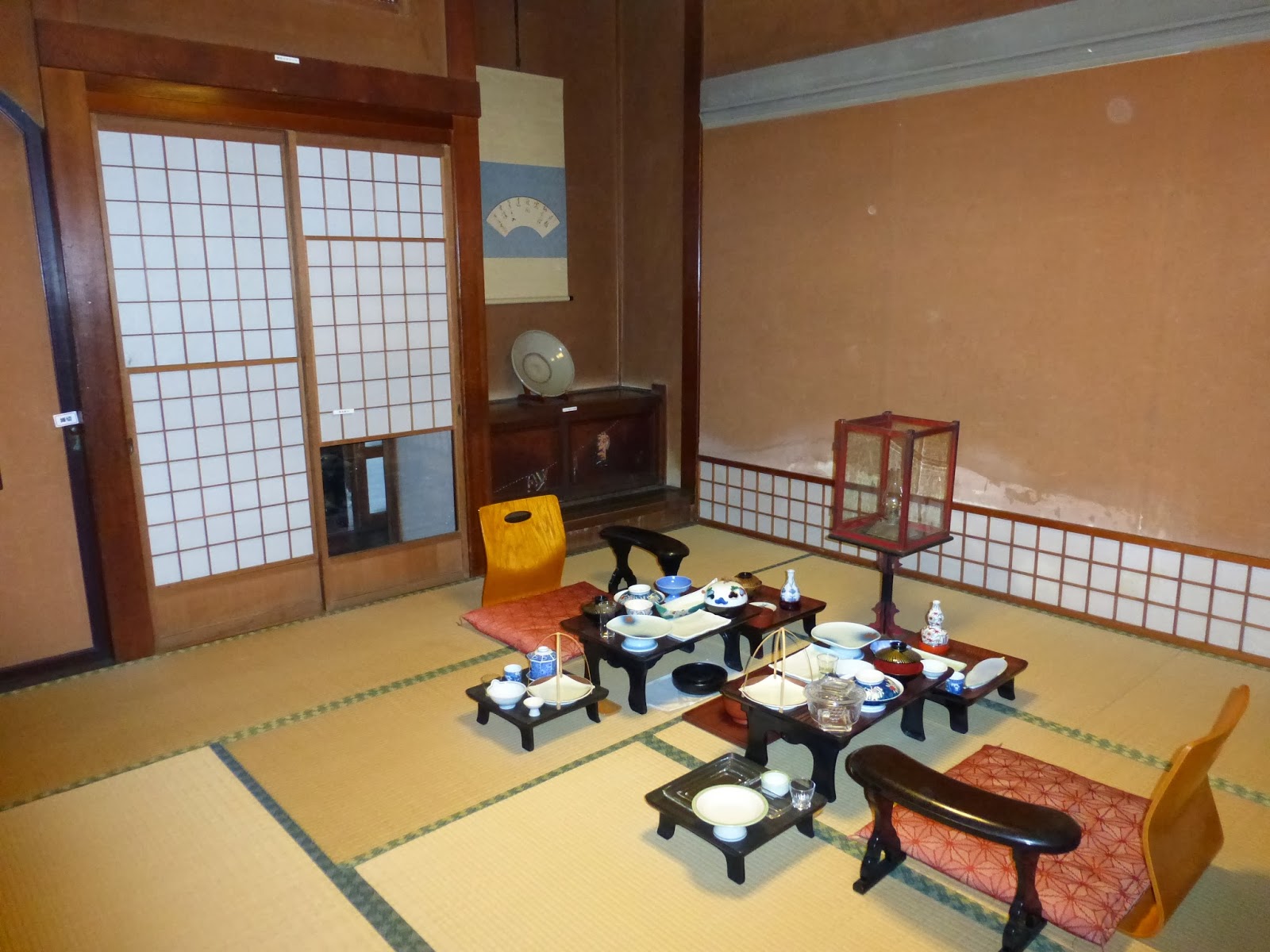 Throughout the building, there are very good quality shoji screens.  The overall decoration feels very tasteful. 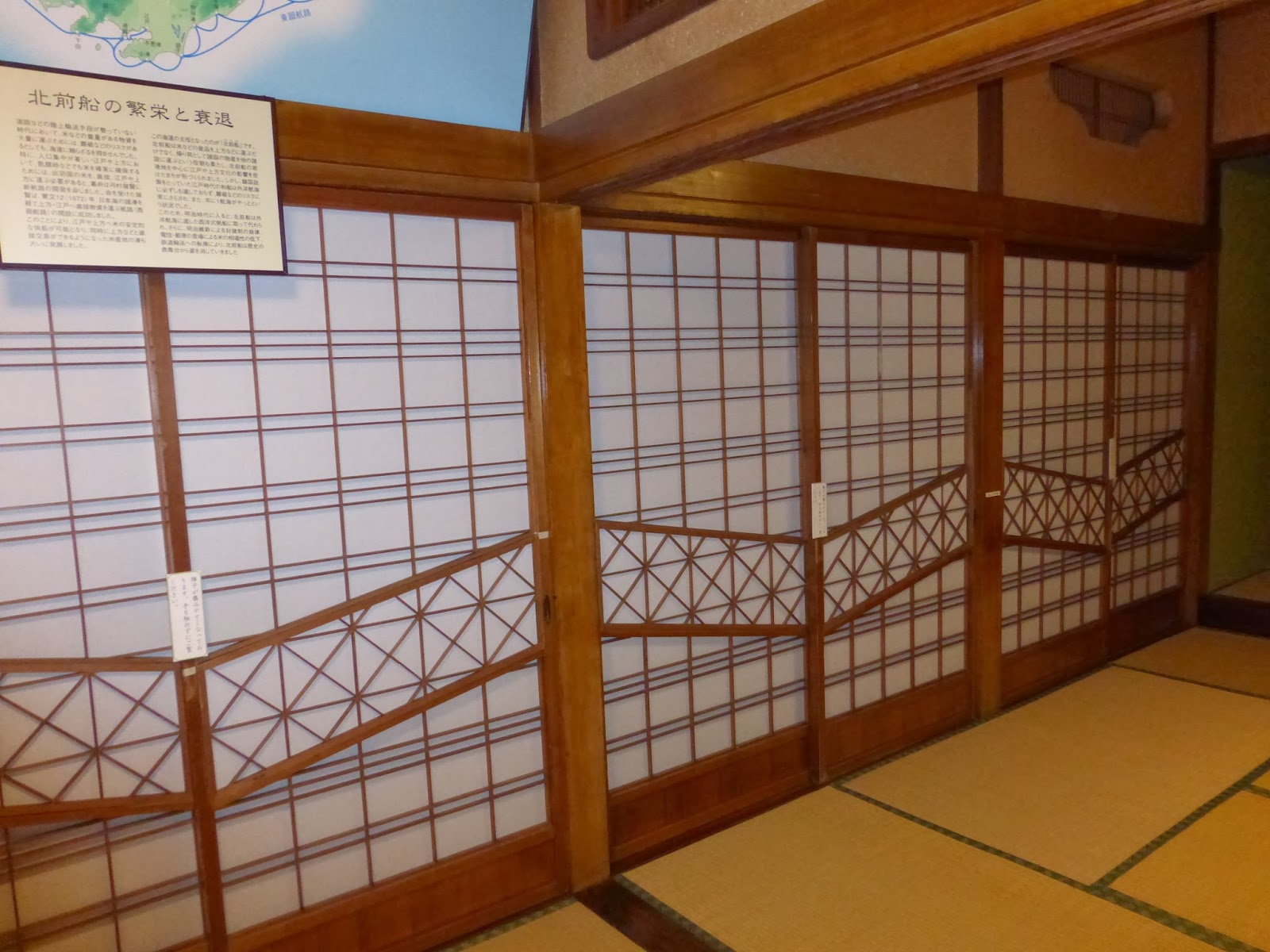 The tea green colour in this tokonuma alcove is lovely and refreshing. 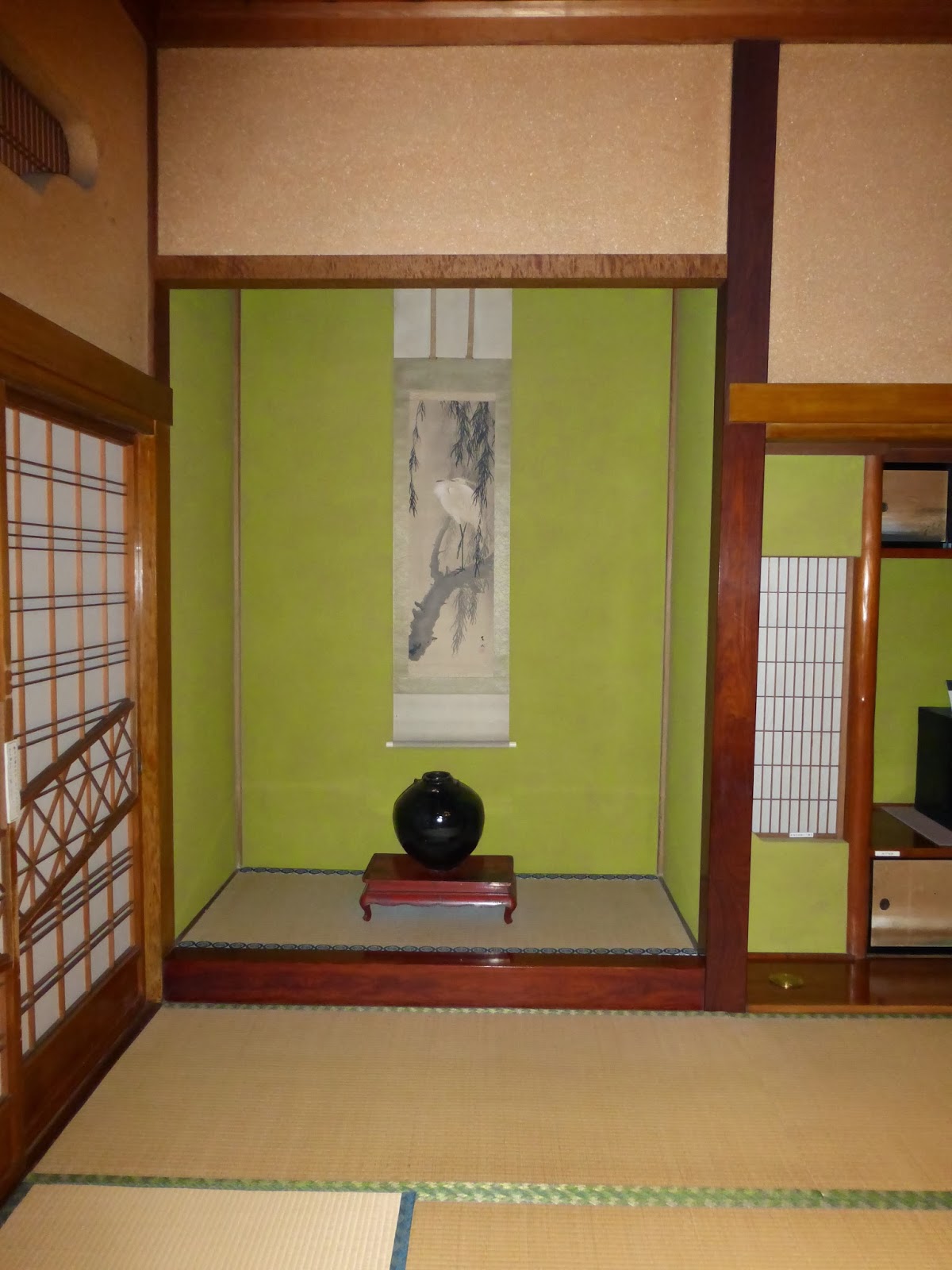 Upstairs there was an exhibition of Kabuki and Noh costumes.  Most were hung from the ceiling, so we could see them from both sides.  As these textiles are designed for the stage, the patterns tend to be bold and not so finely detailed as normal kimono.  Many are re-creations of very old patterns too. 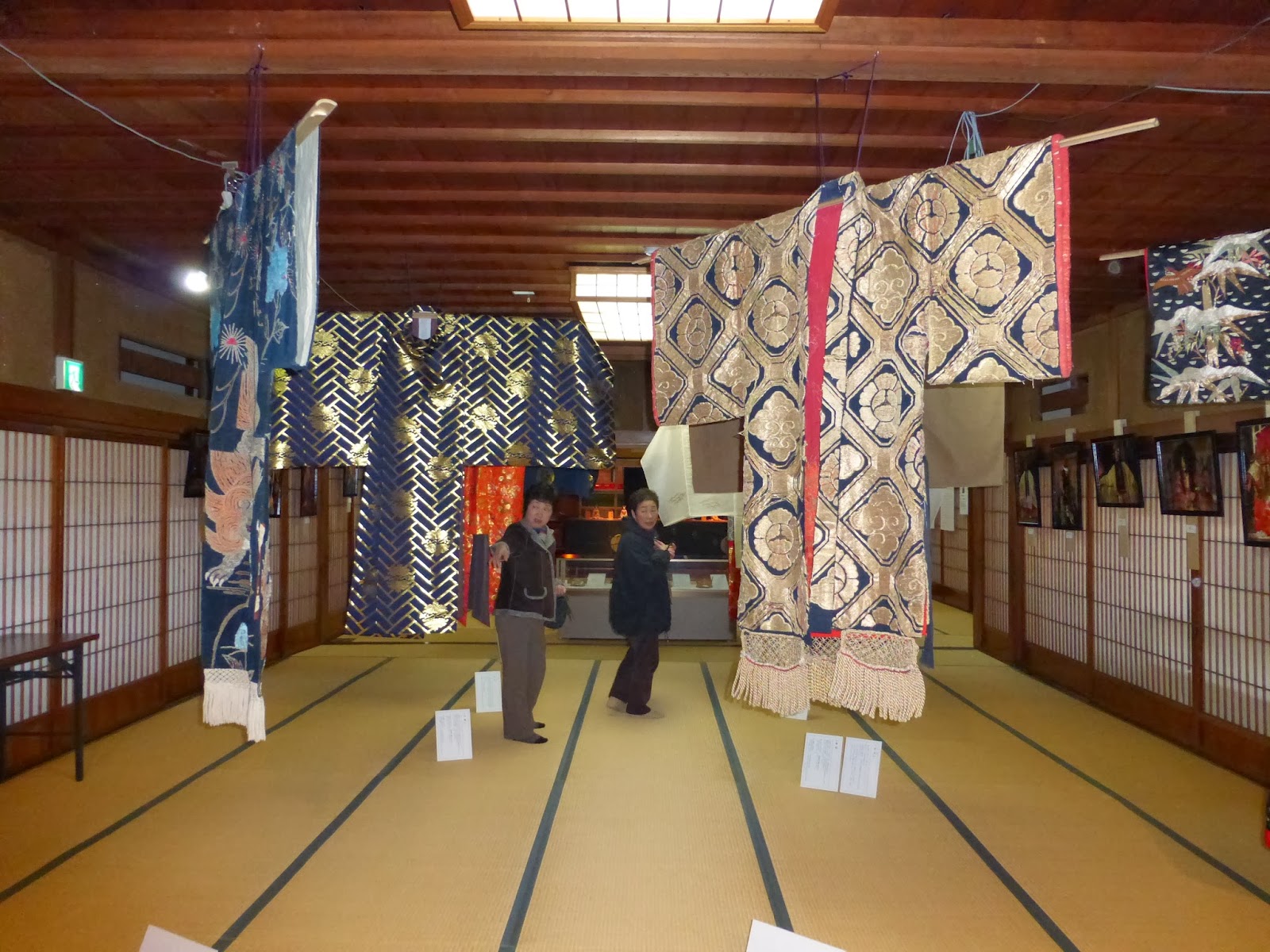 Our main reason for going was to see the exhibition of kasafuku - I guess the best translation of that would be 'lucky umberellas'.  These are Japanese umberellas with lots of hanging charms, all made from fabric.  What a fabulous way to use up tiny pieces of treasured fabrics (and an umberella, if you happen to have one and don't know what to do with it!) This guide shows you all the different items on the umberellas - flowers, fish, the 'collection of treasures' etc. 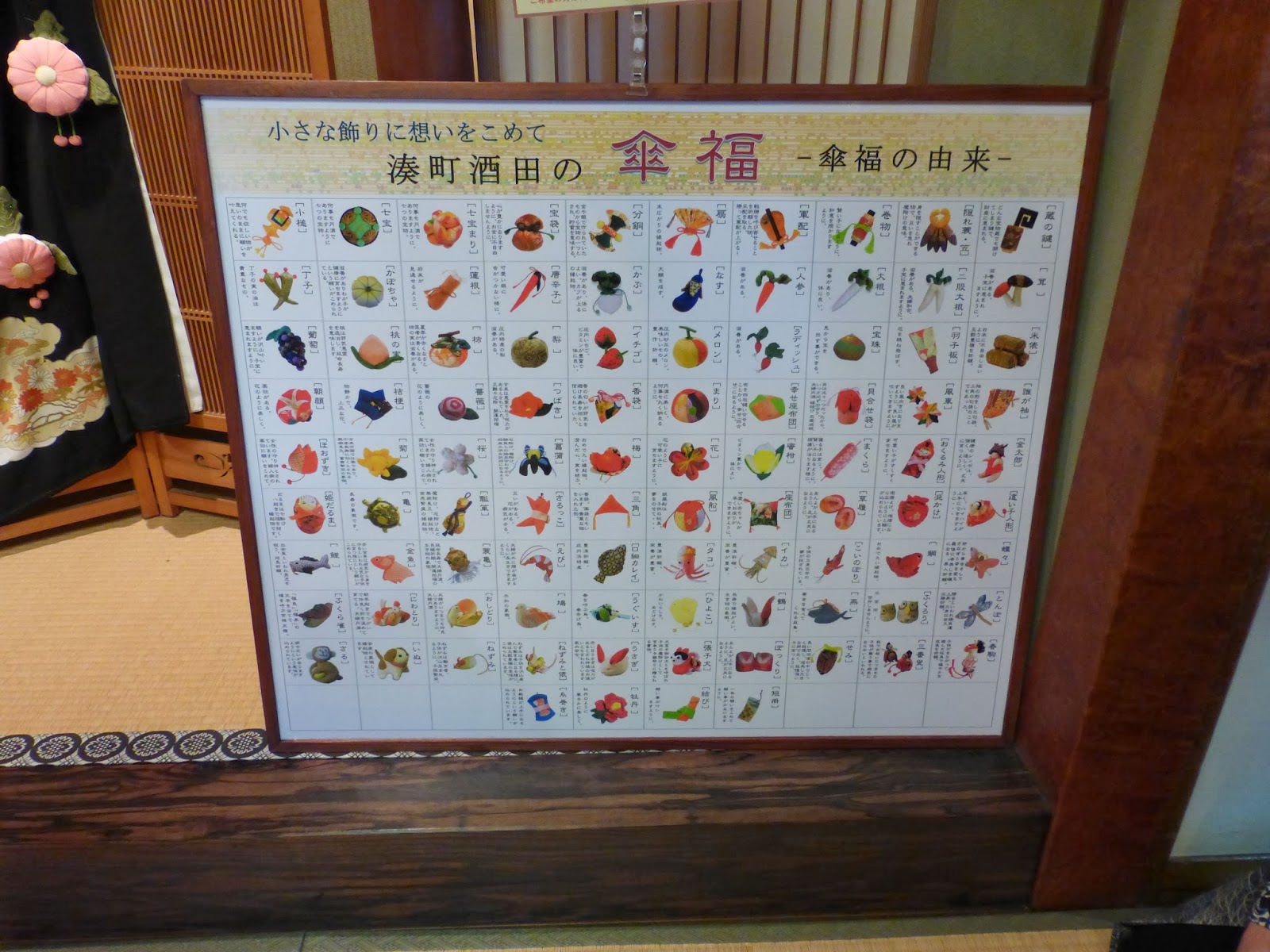 The edge of the umberella has a red fabric trim an the individual charms hang on strings. 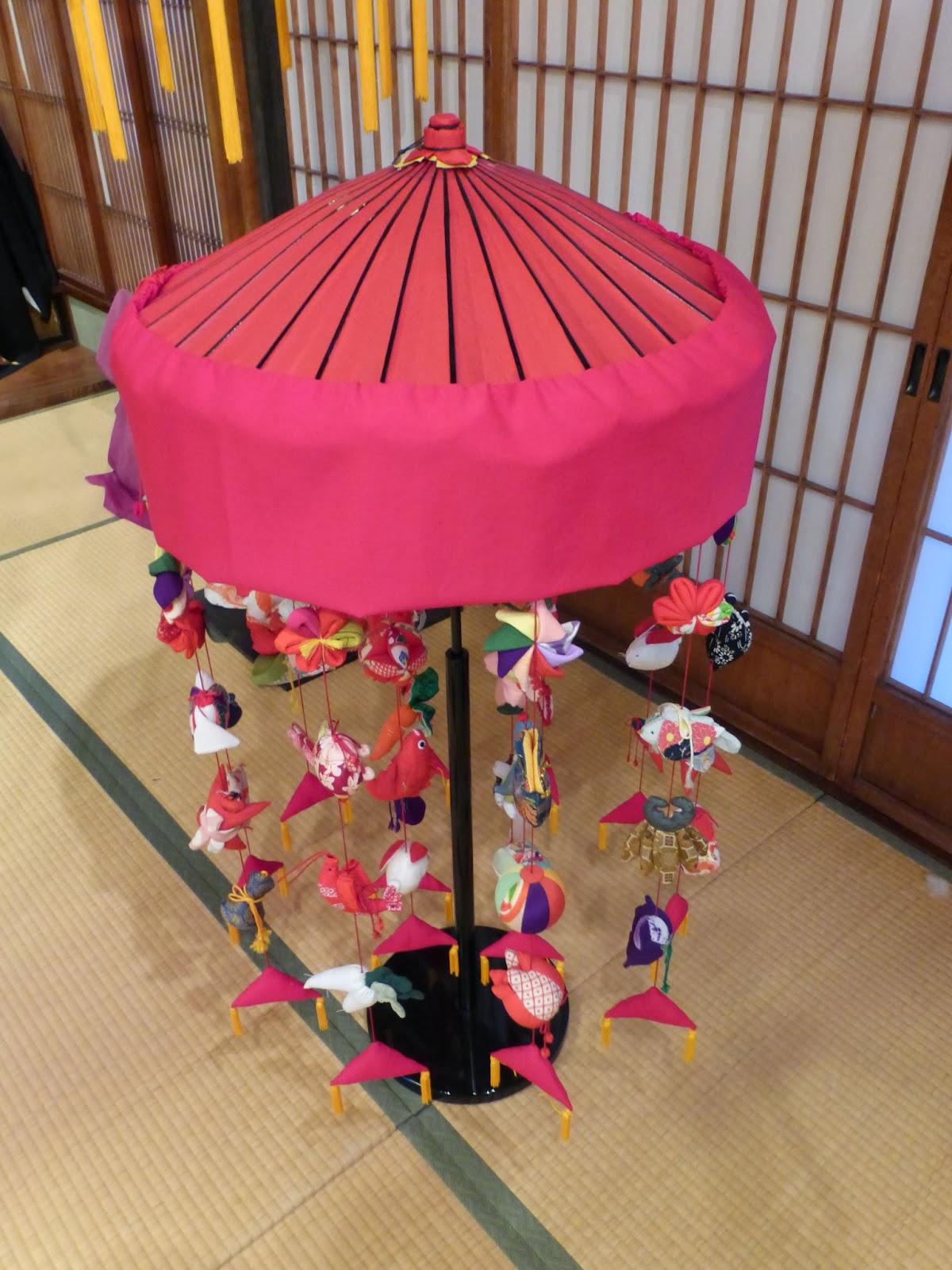 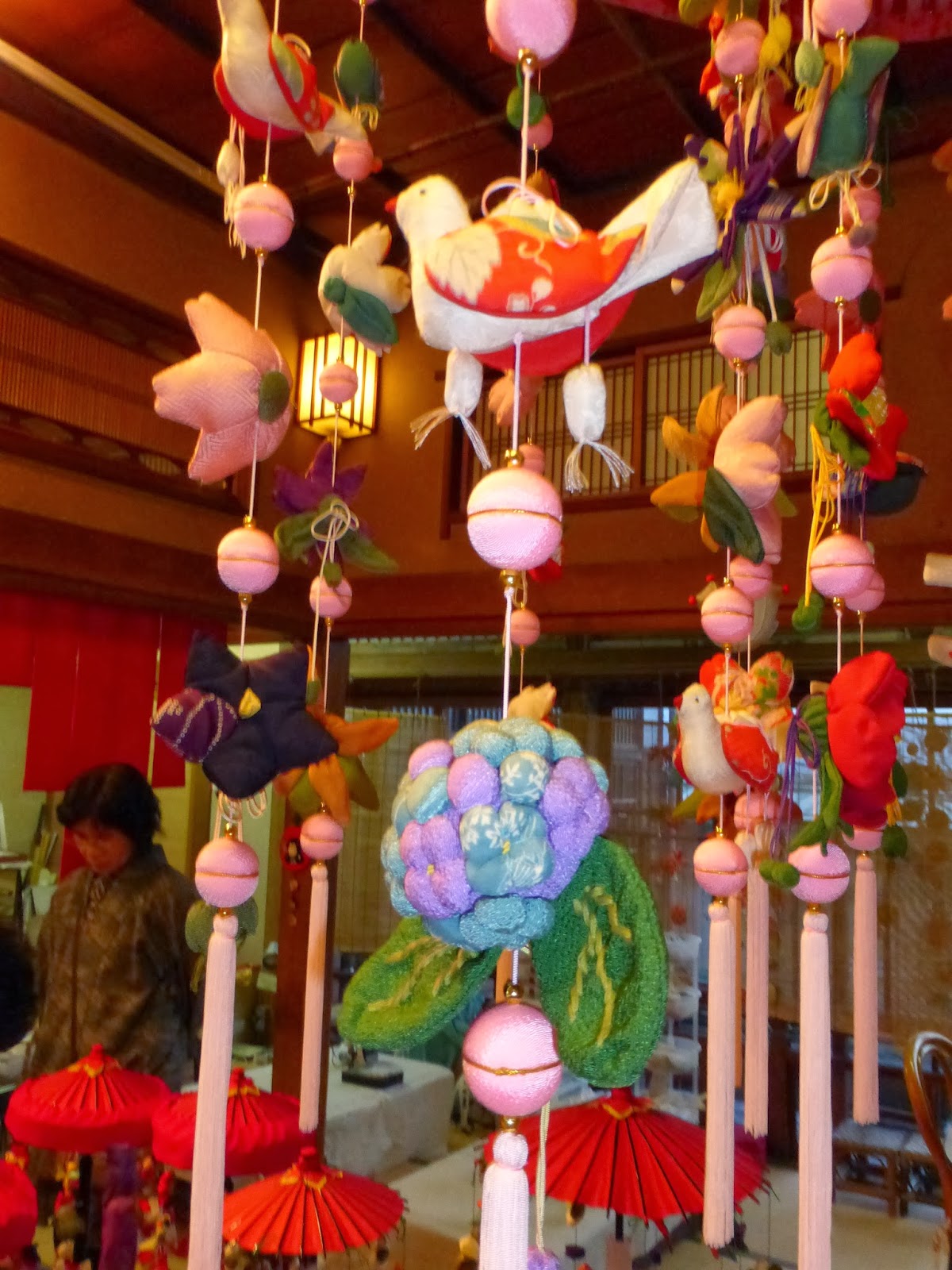 I liked the takarazukushi (collection of treasures) themed kasafuku best, but that's a collection of motifs I like.  The shapes are interesting and something a bit different, while the symbols have good meanings - the lucky mallet (shake for good luck), the never ending money bag, the hat and coak of invisibility, treasure house key etc.  I suggested to Reiko that she should make a sashiko version - or maybe I will. 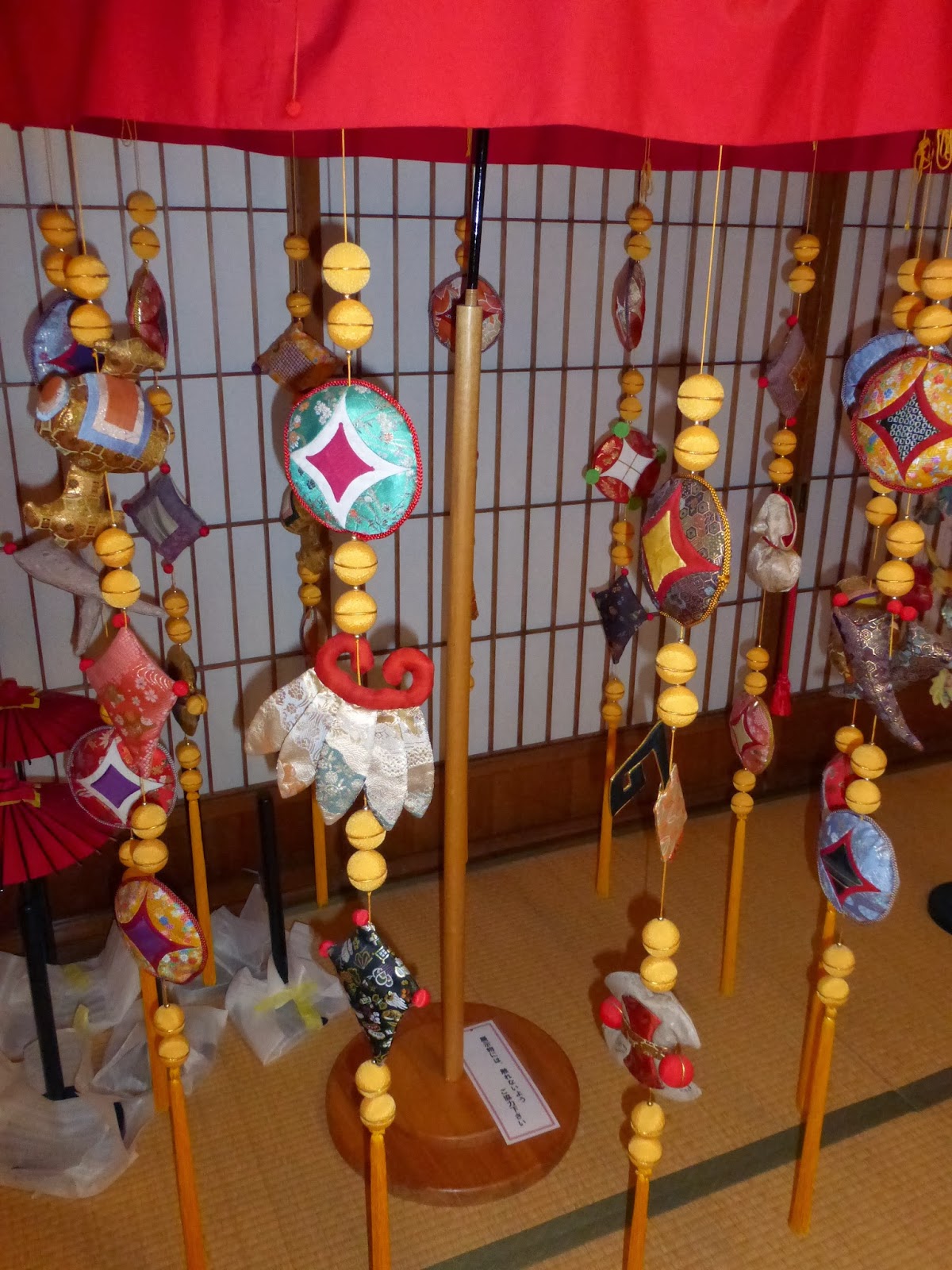 I use some of the takarazukushi as block designs in 'Japanese Quilt Blocks to Mix and Match'. 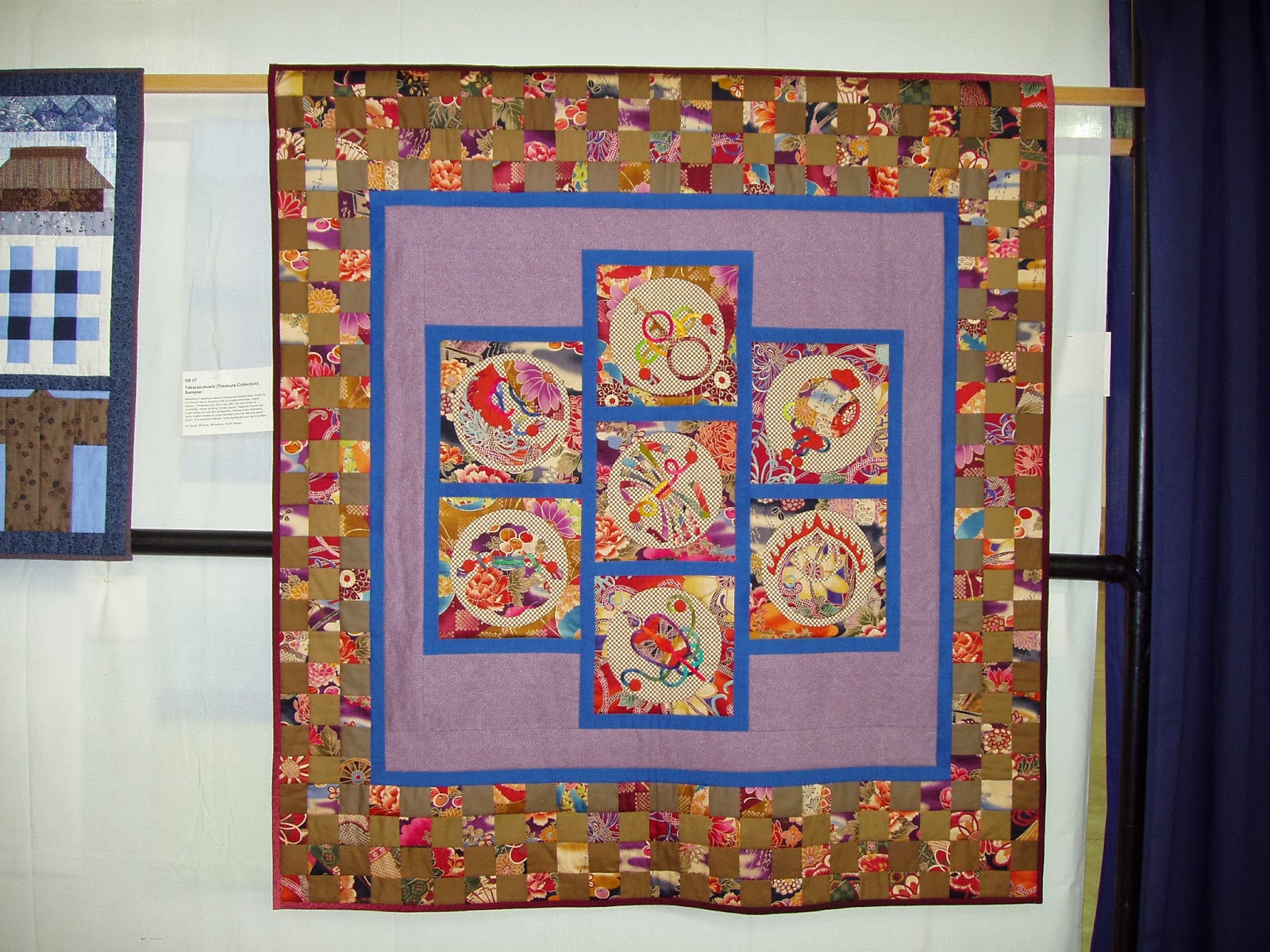 This is the foyer at the Sanno Club.  What an amazing place! 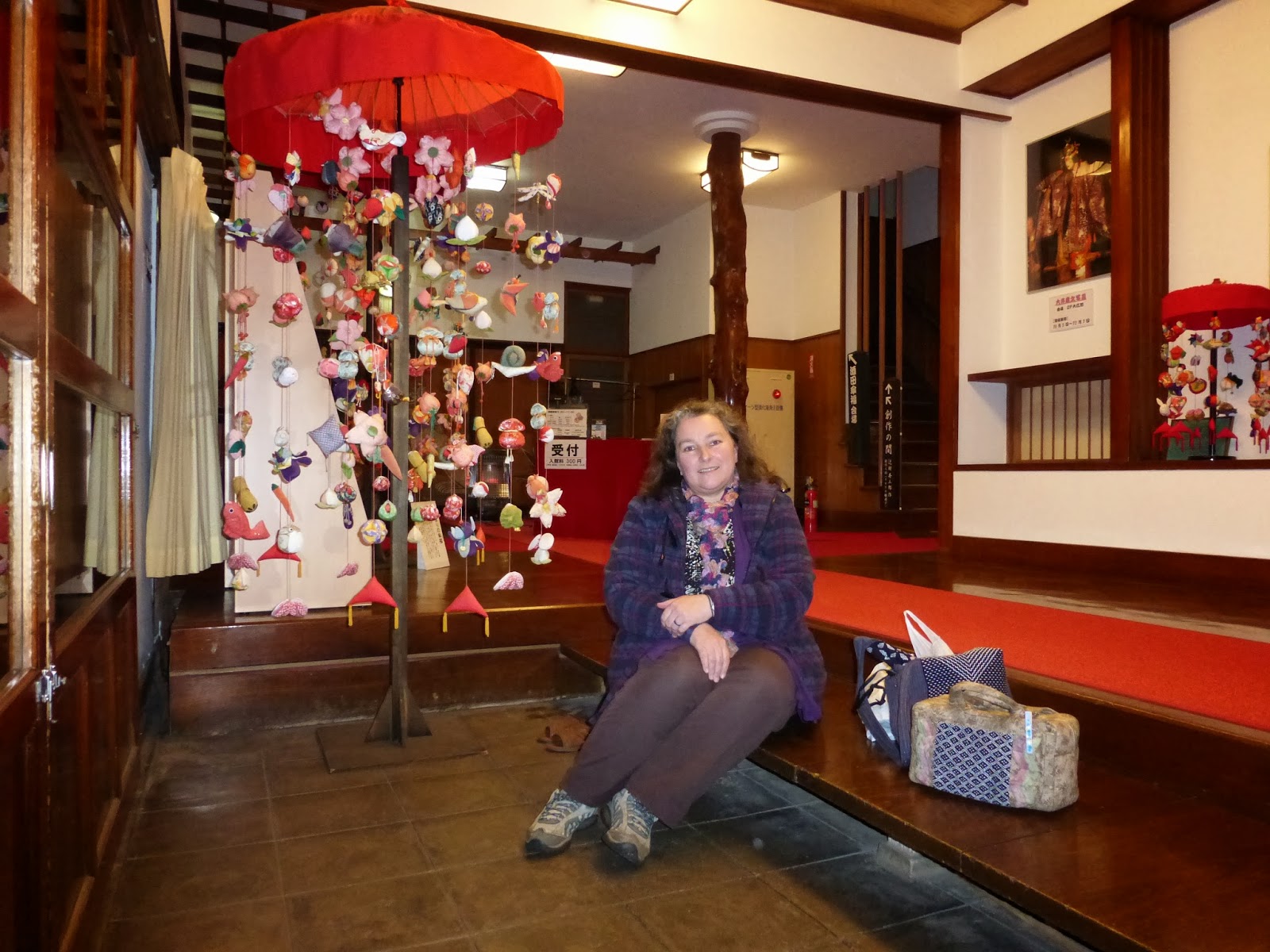 What a lovely virtual tour! I hope you do make a sashiko version of the umbrella treasures, that would be stunning!