Boro and Vikings in London 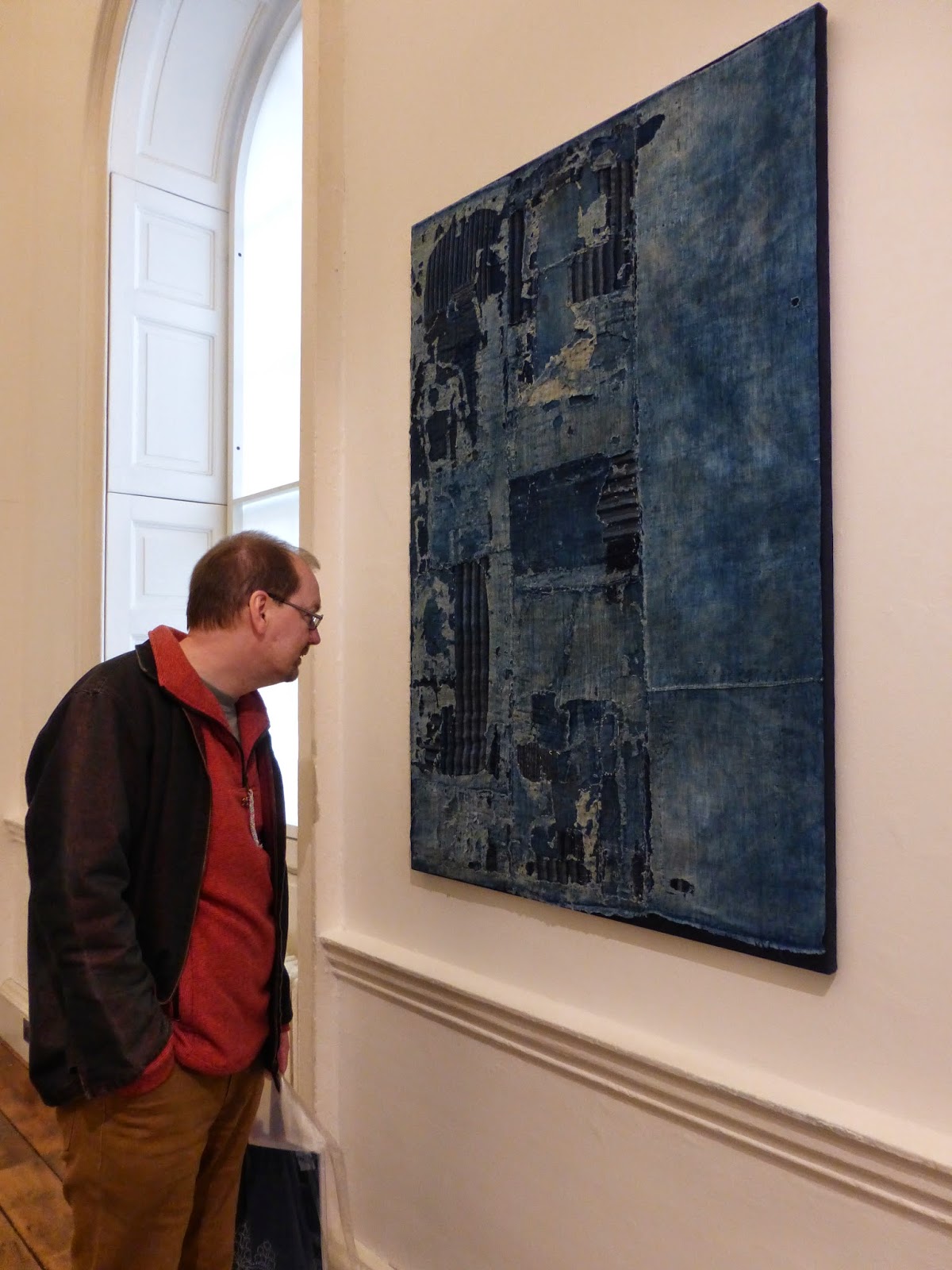 Sunday was rather frustrating, as our planned route into London had to be scrapped because the Northern Line was closed, but we still managed to see both the exhibitions we had planned - Boro at Somerset House (mentioned on my blog in mid March) and Vikings at the British Museum.  The exact location of the Boro exhibition wasn't too obvious once in the courtyard at Somerset House, but we tracked it down to the far left corner.  Rather than huge and obvious banners favoured by the likes of the British Museum, you need to look for information posts around the square. 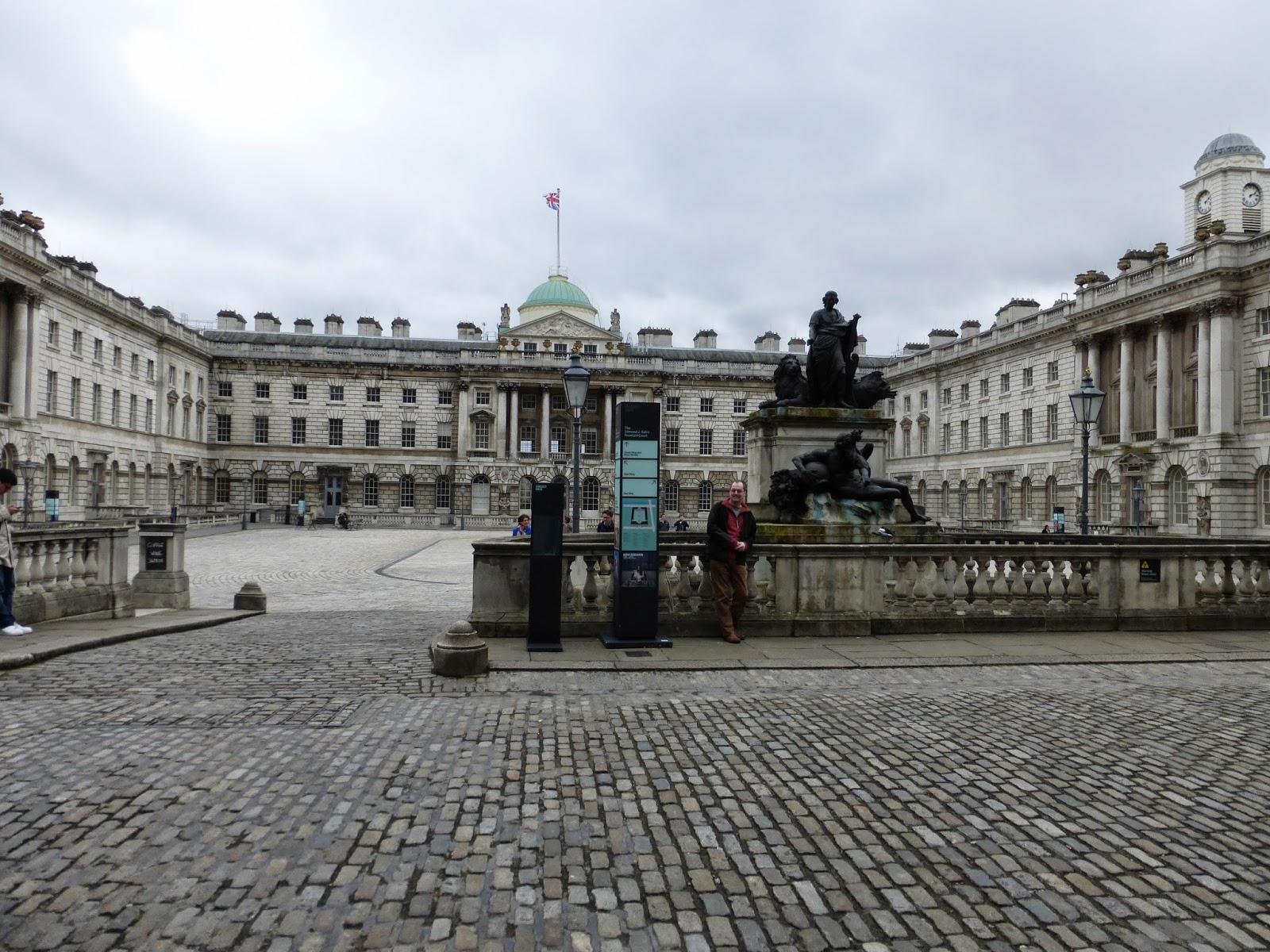 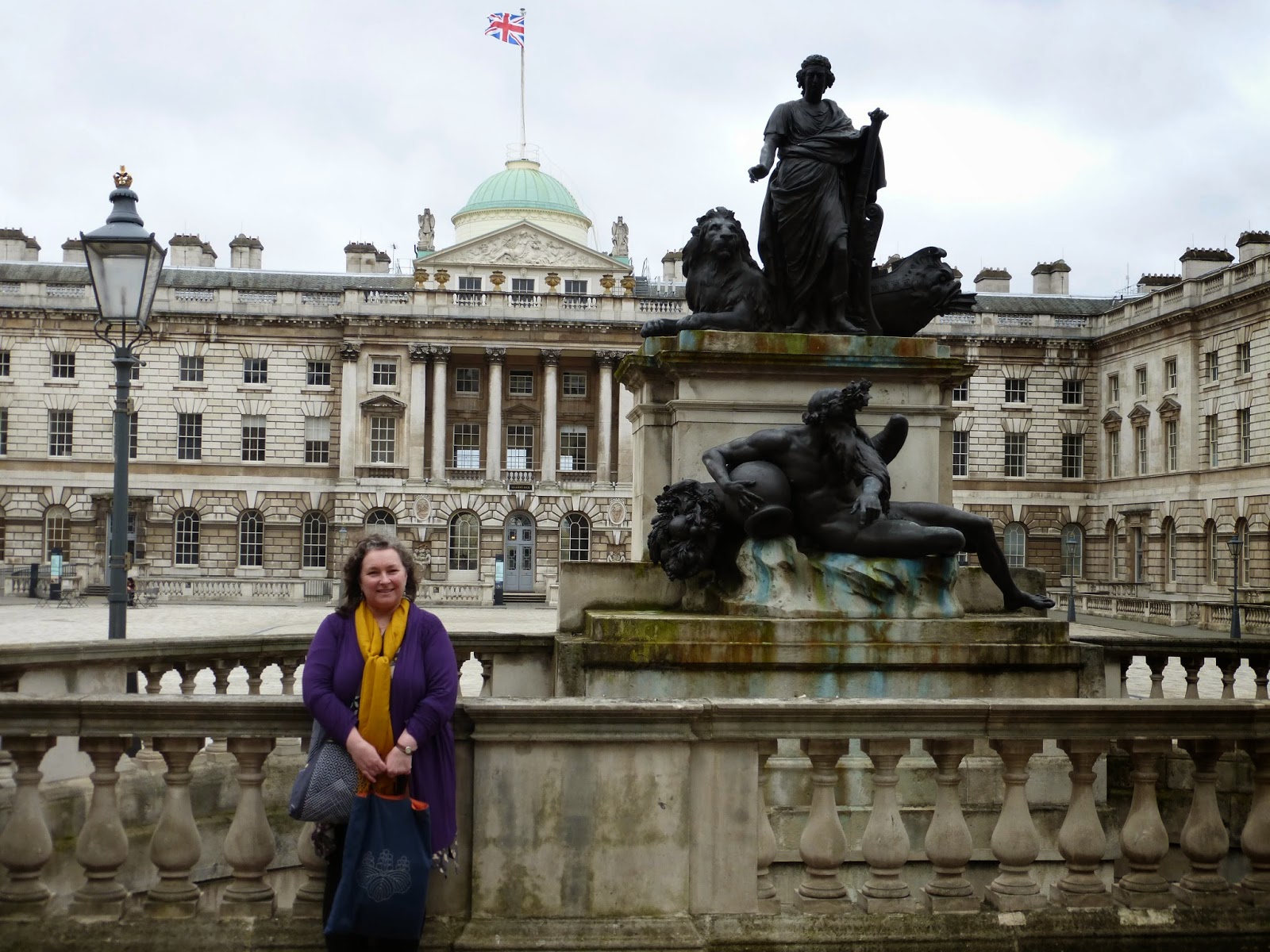 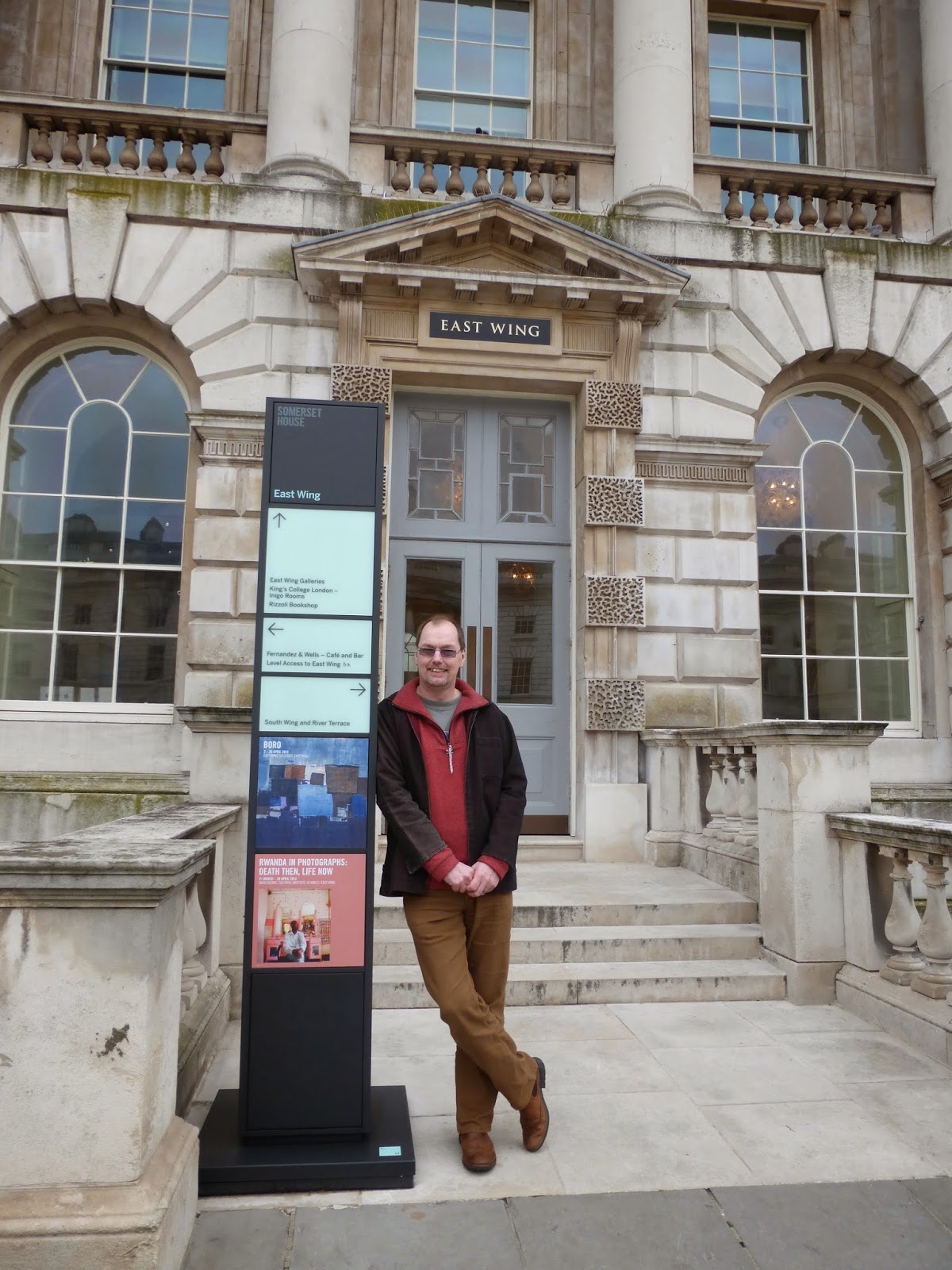 (It took a minute to line up the following photo just right...) 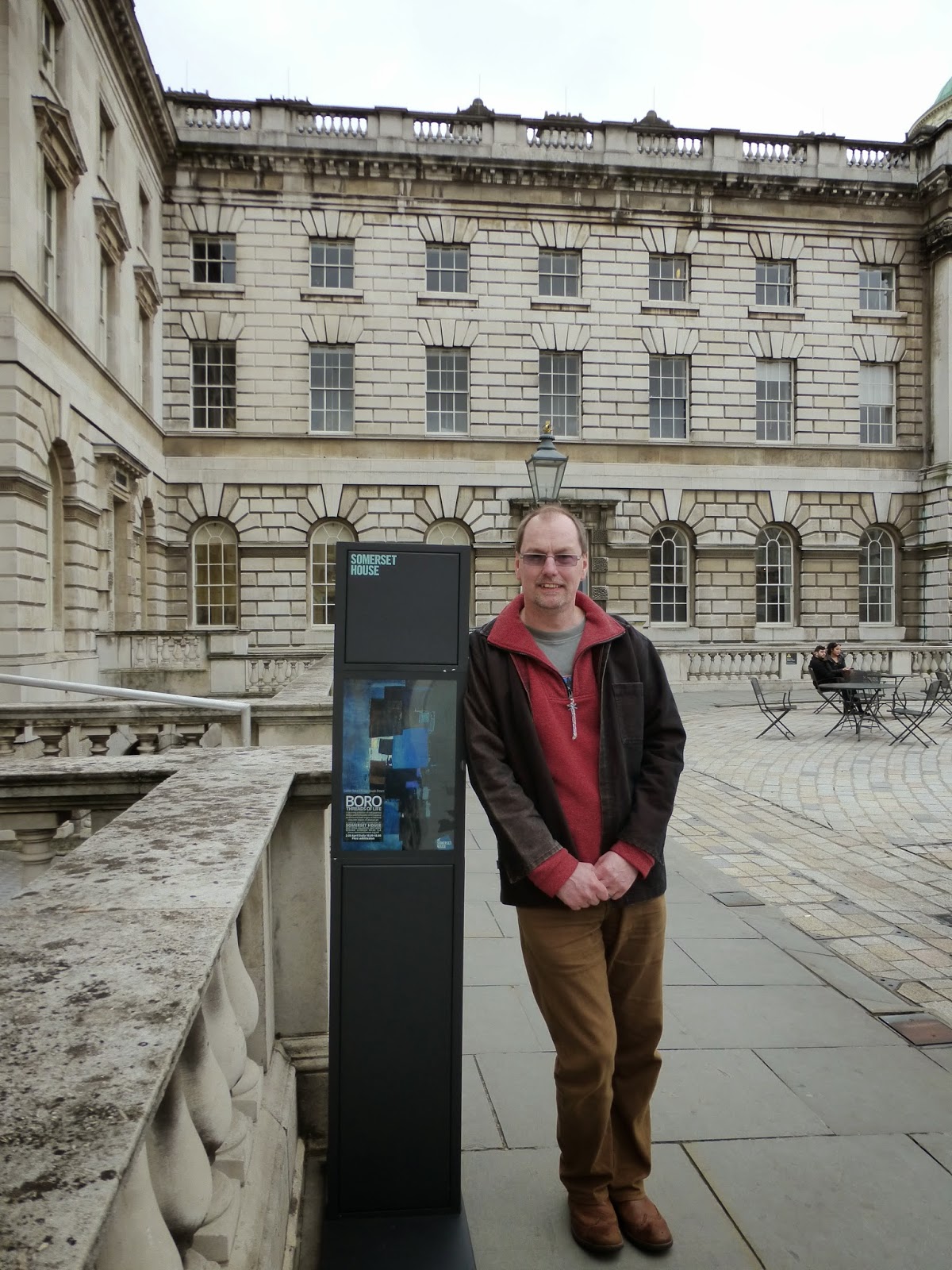 The boro were mostly mounted on canvas stretchers like this. Combined with the original interior features of the building, this gave the boro a different feeling from how they would have originally appeared. Plus, of course, what we are viewing is often the back of the boro fabric - the front would often have neatly turned repairs in the style of reverse applique, while the backs show the overlapping patches with simple running stitch holding them in place. 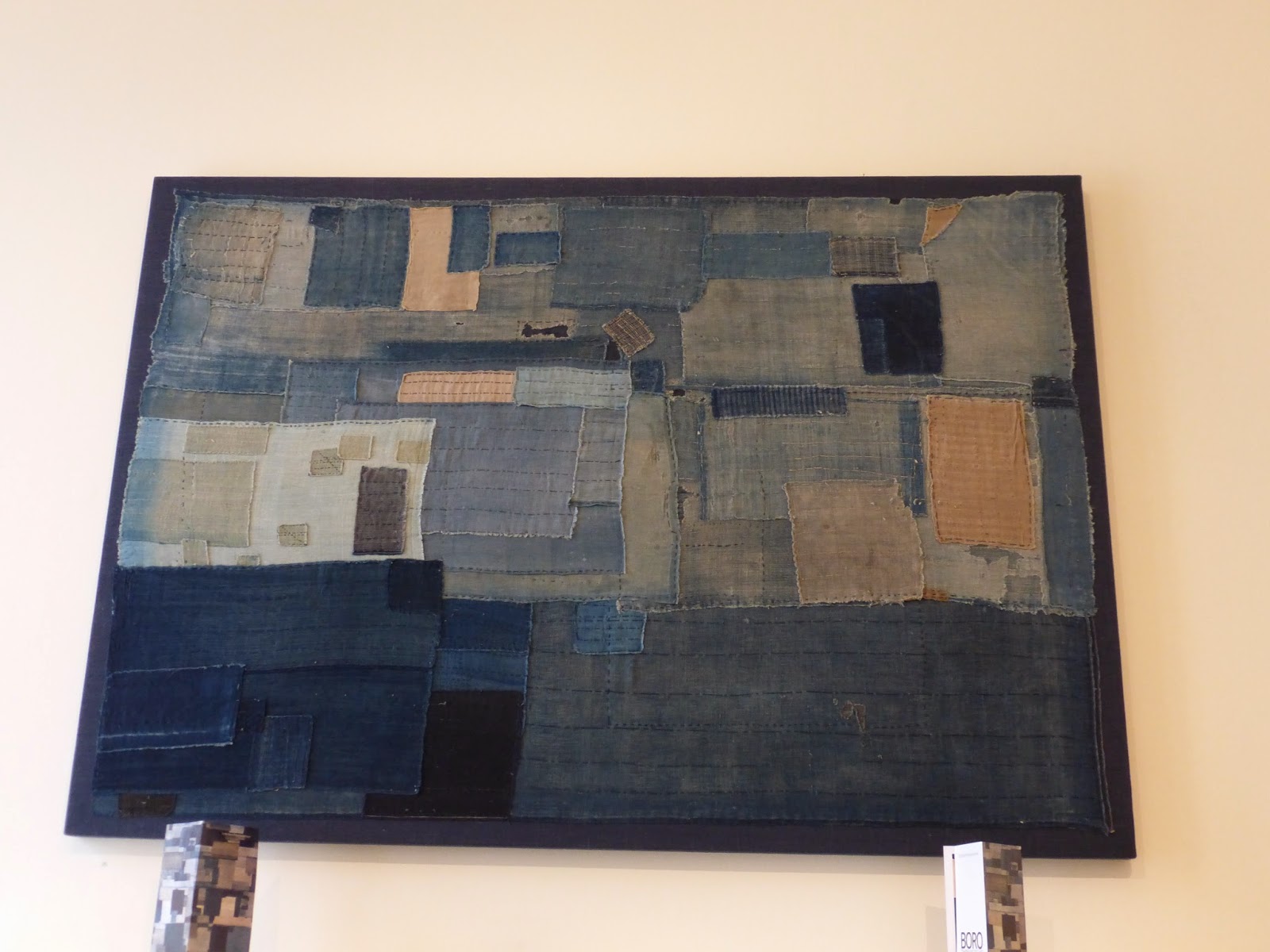 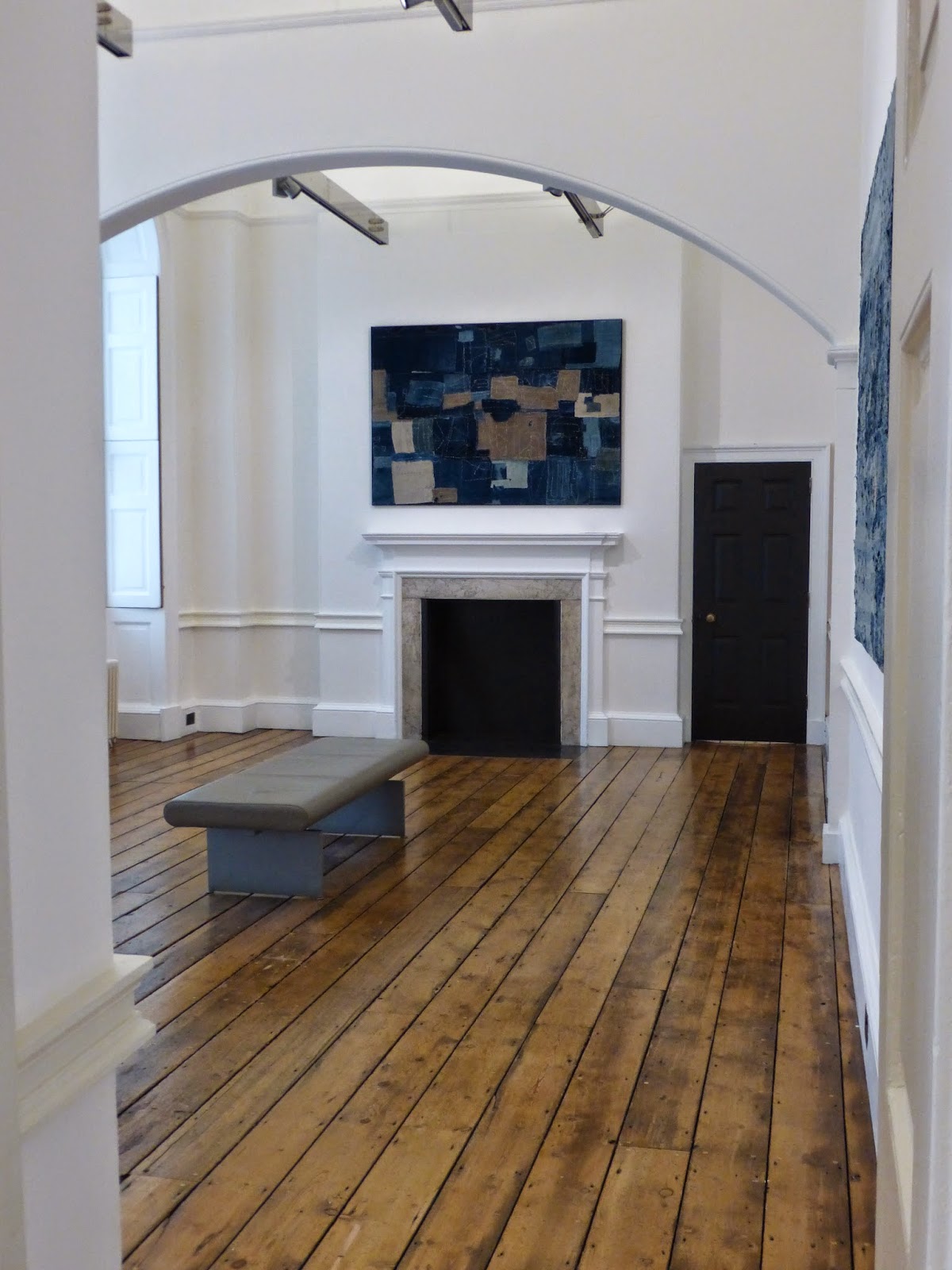 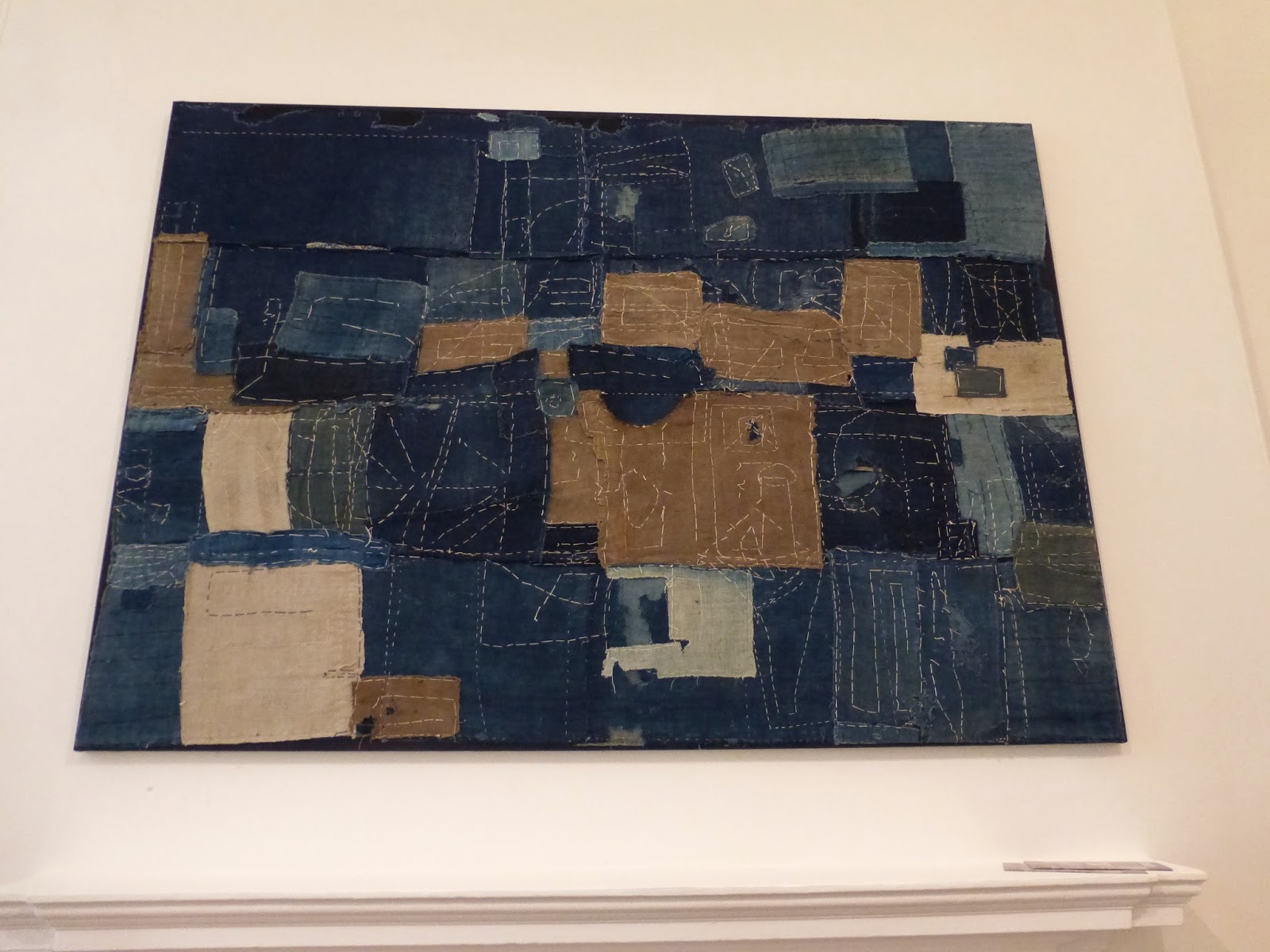 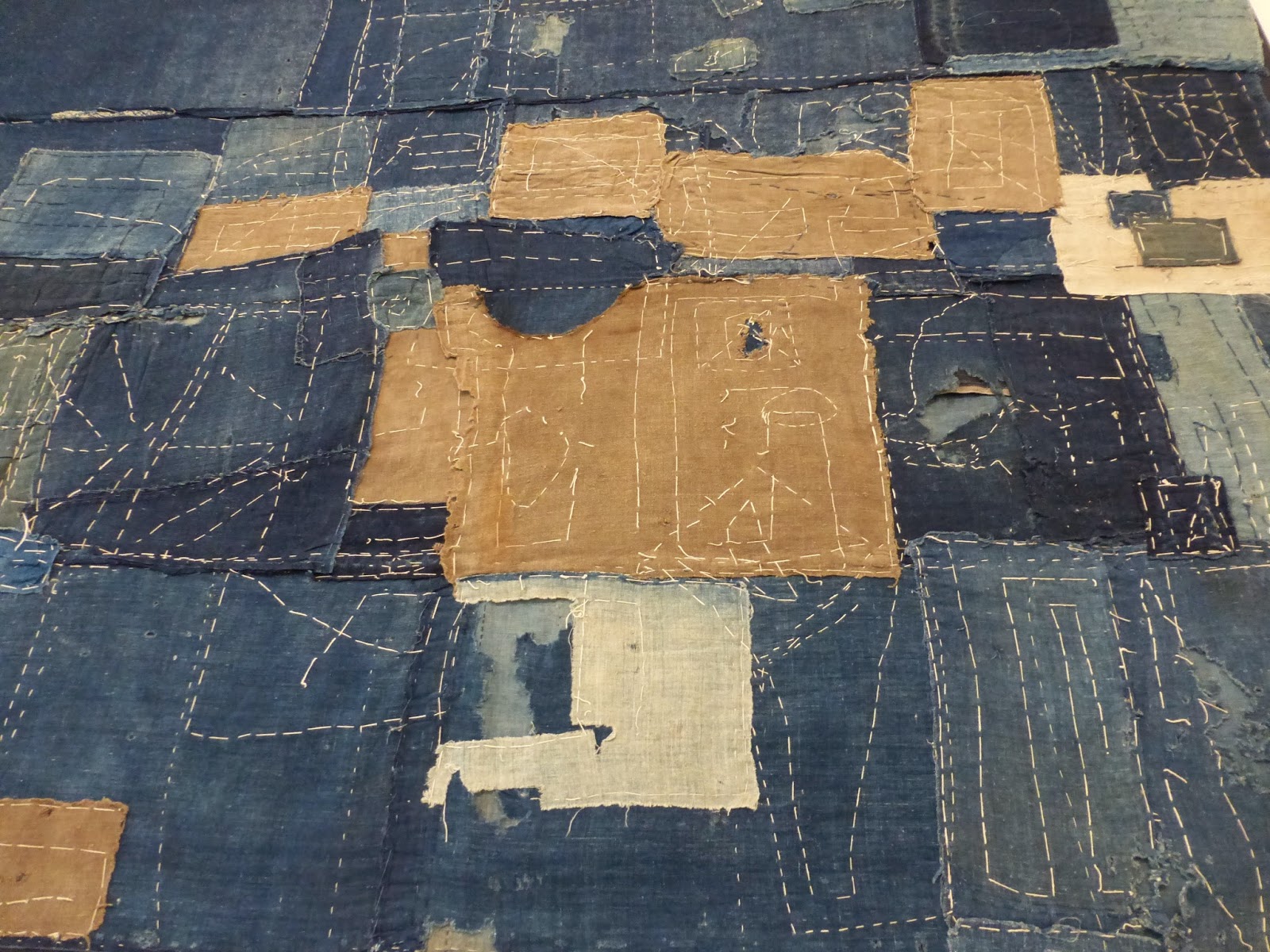 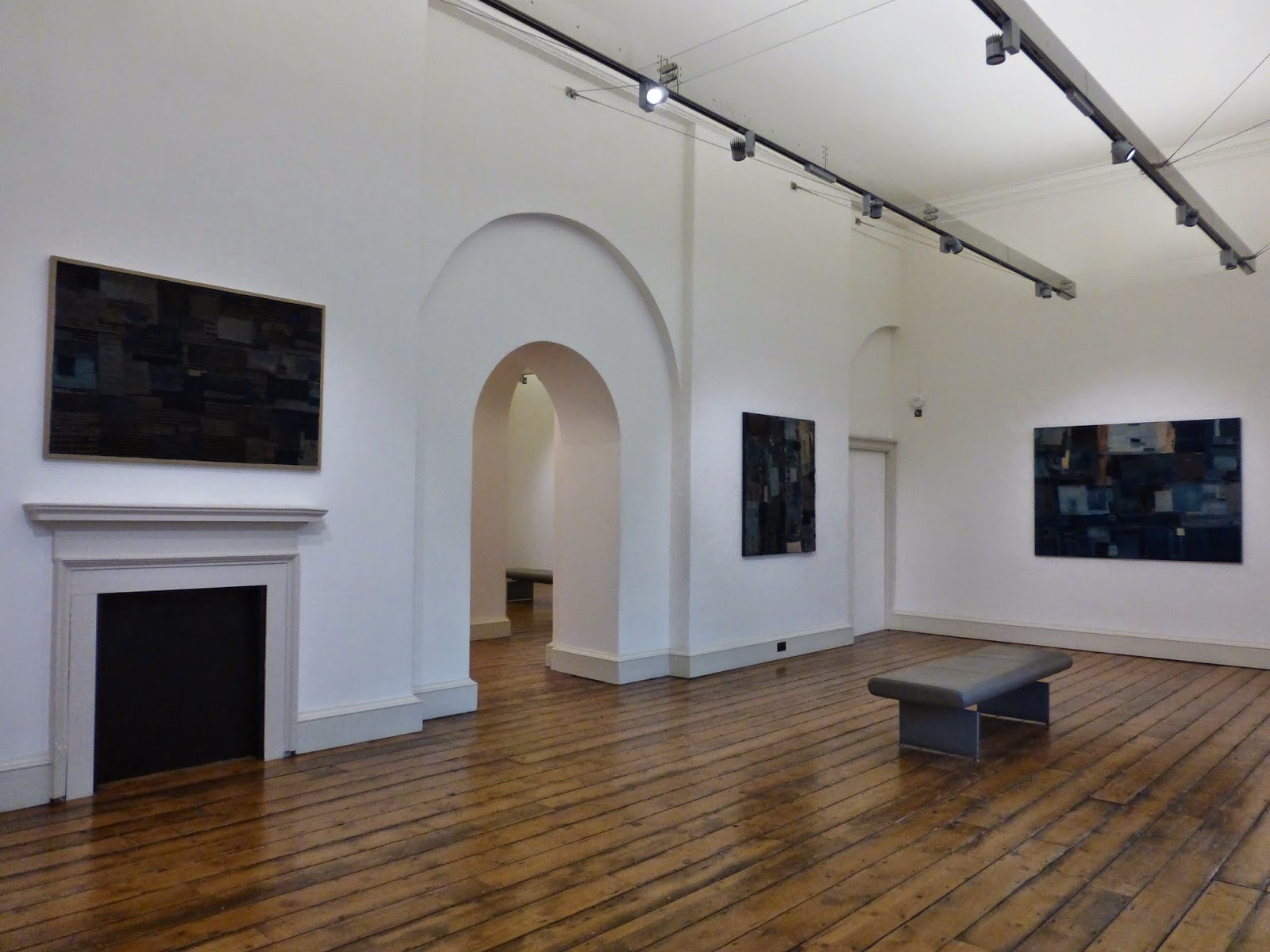 I have included some of the information panels, not in any particular order.  There was no set flow through the exhibition space and no individual labels on any of the pieces.  You were free to enjoy them on a very intuitive level. As usual, left click the photos to enlarge. 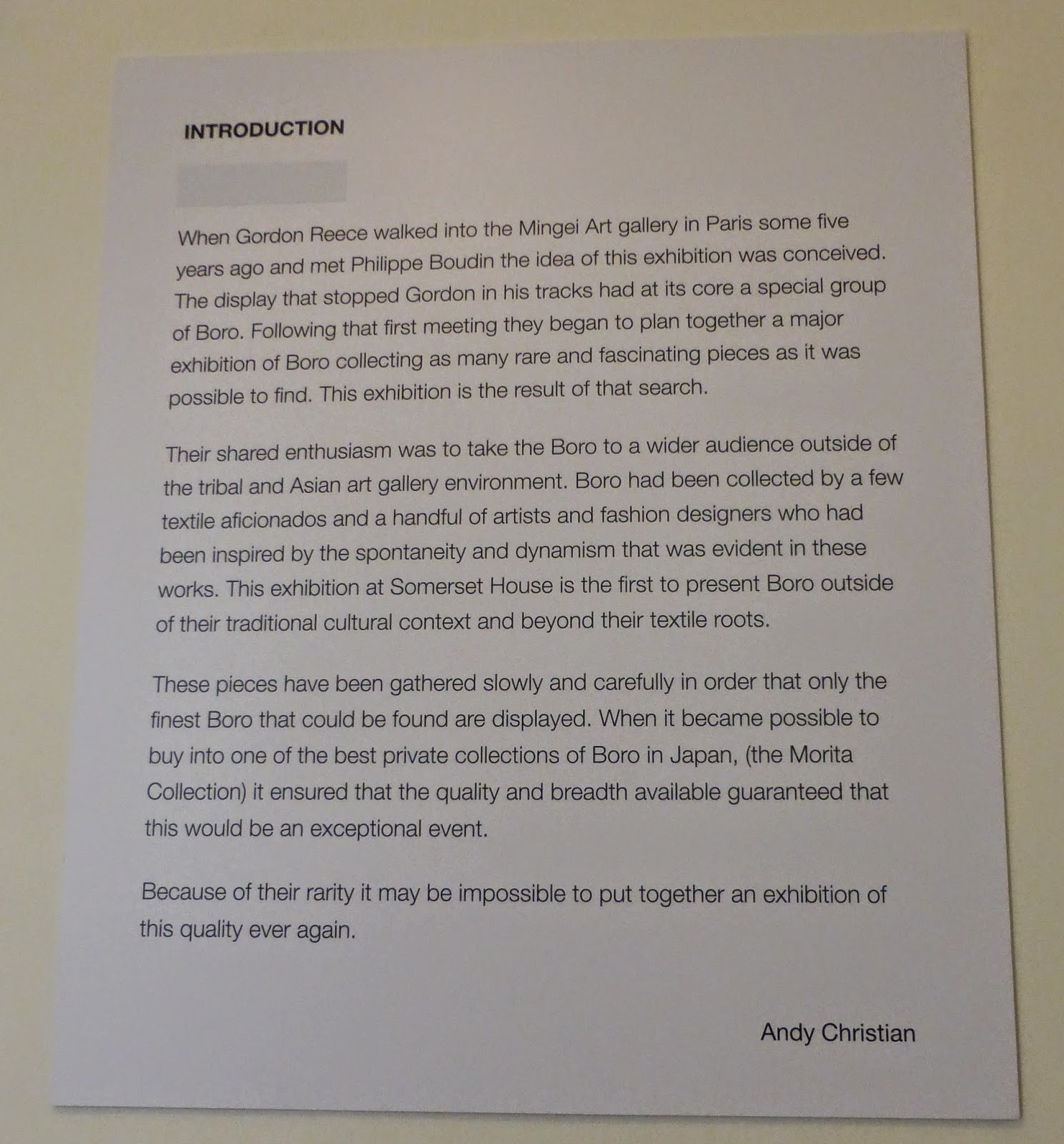 This is the back of a yogi or kimono shaped top futon quilt - it may be the lining rather than the outer fabric.  In use, this would have had heavy padding.  It is easy to tell that it is yogi rather than noragi (work wear) because of the length, the gussets under the sleeves and the width - anyone who could wear that as a work jacket would have to be a giant. 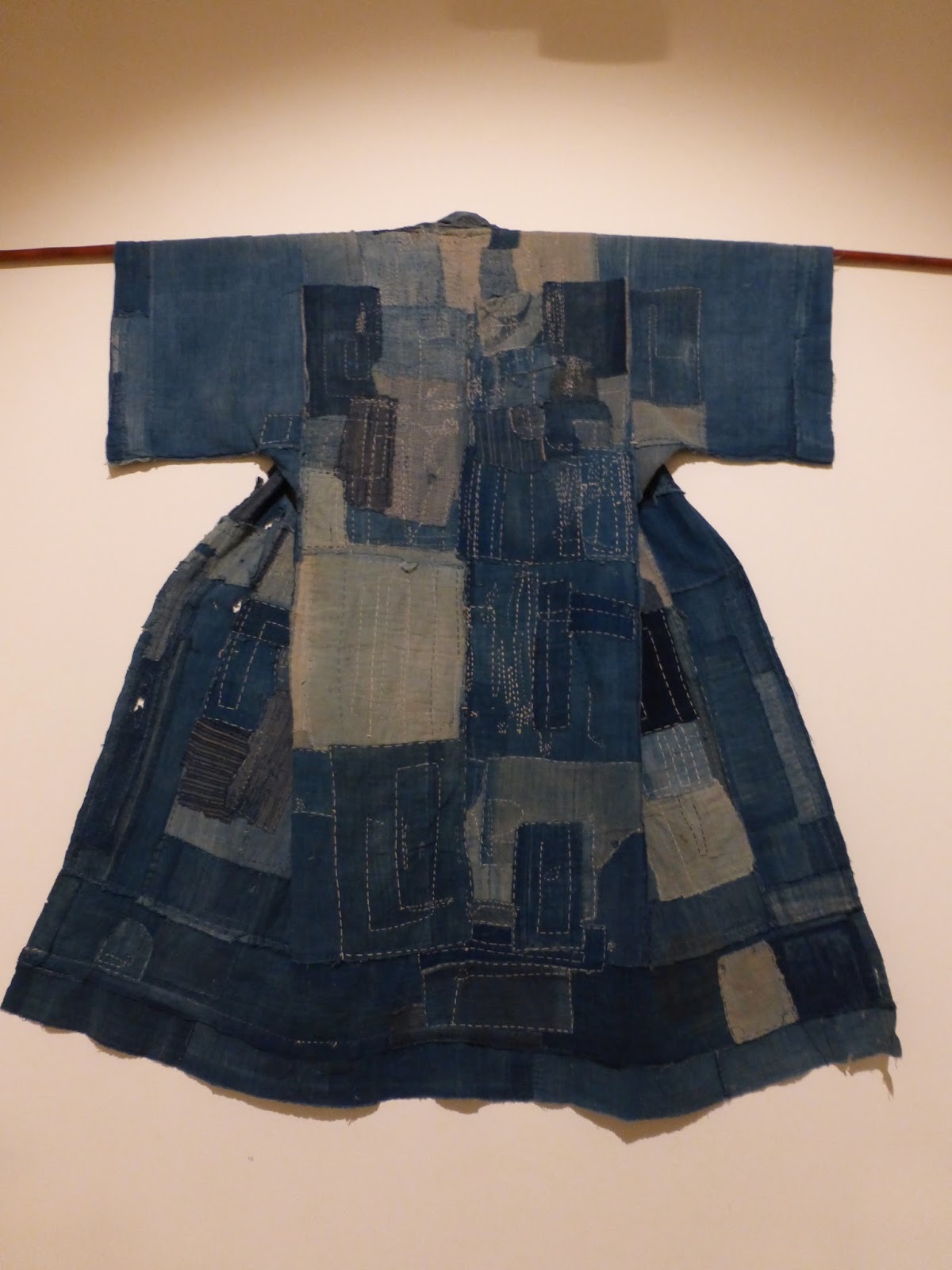 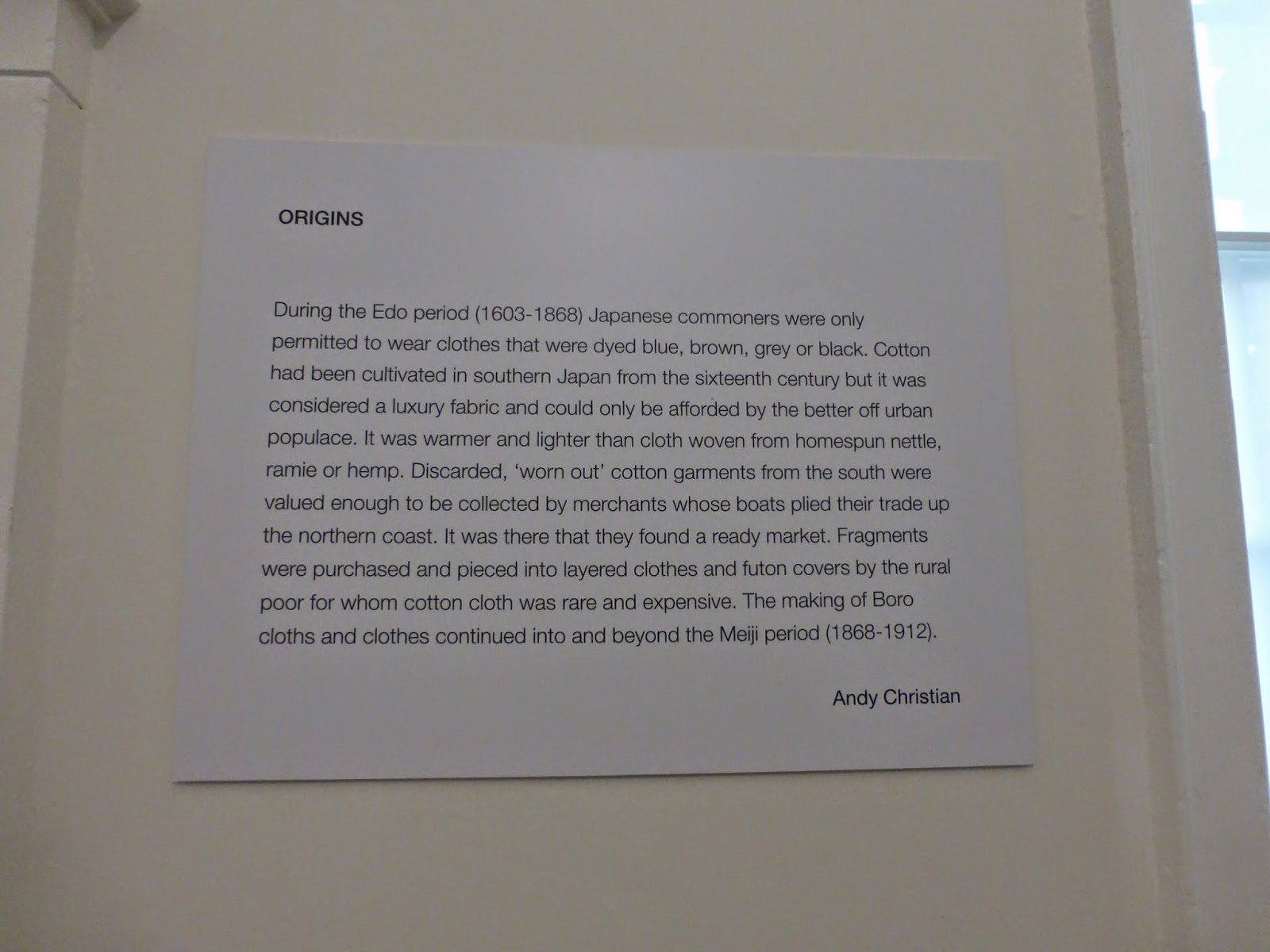 This was one of our favourites. It is for sale (£25,000).  I think all the pieces are for sale, with some already sold, but the price list isn't displayed. 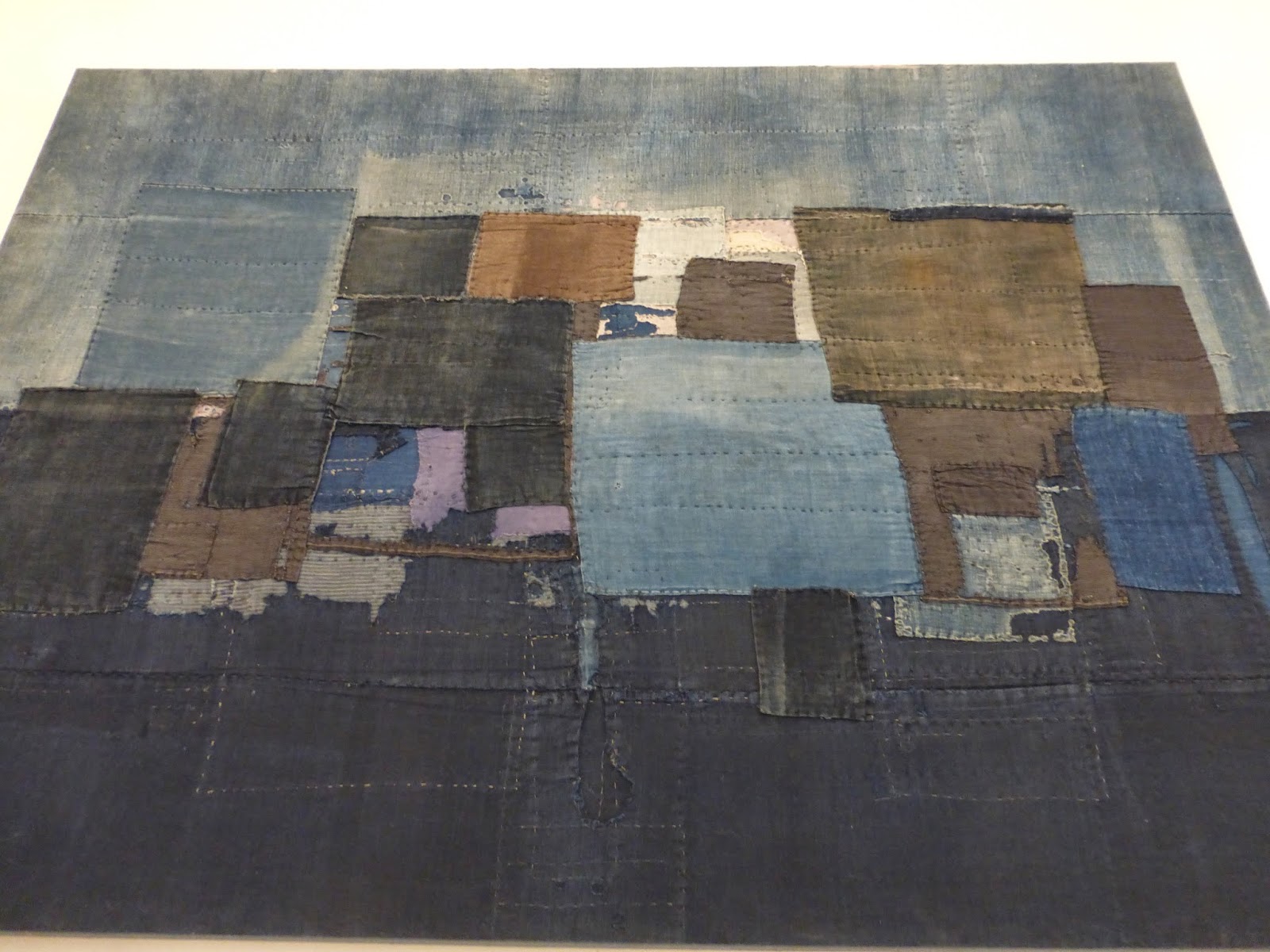 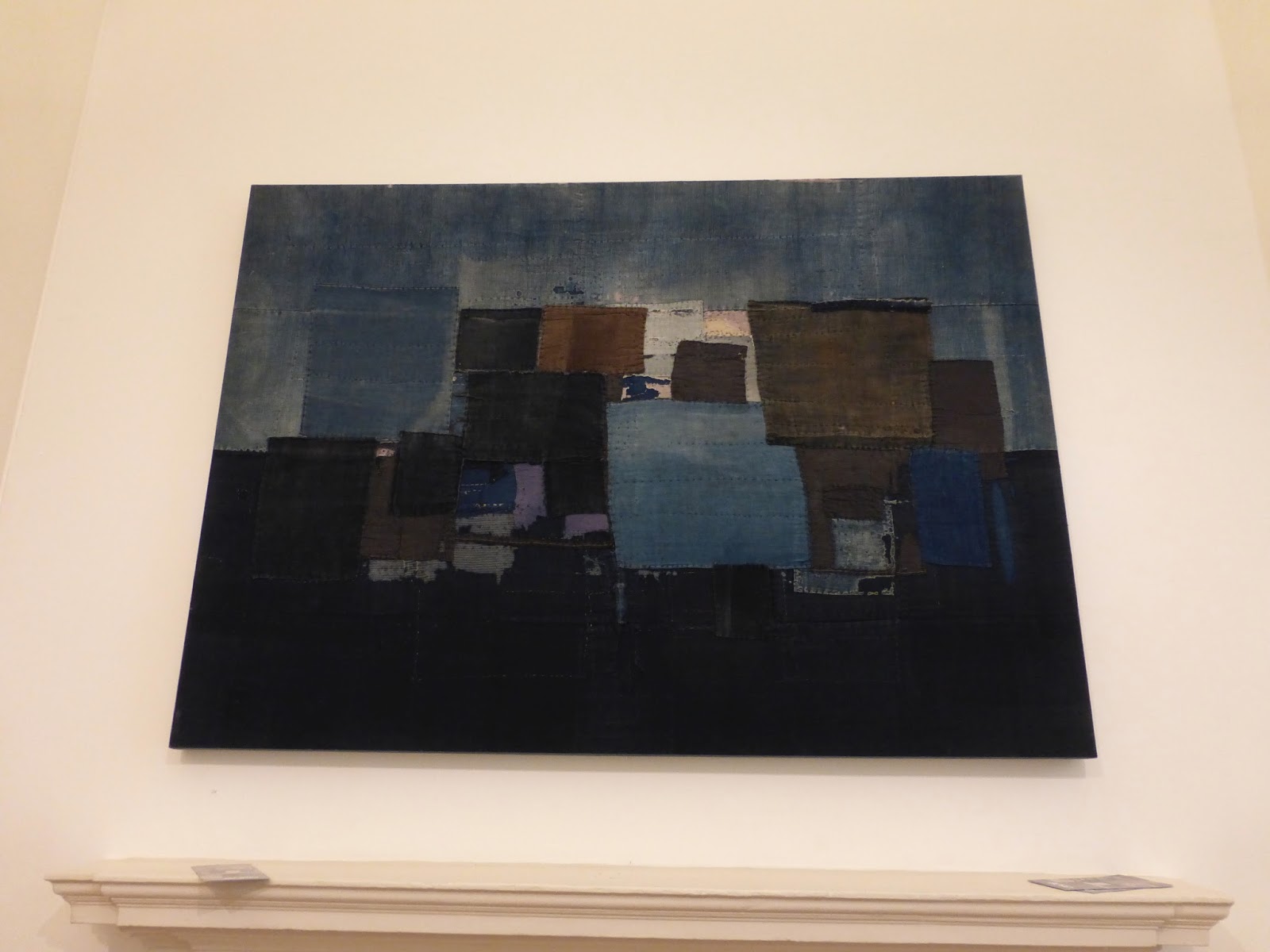 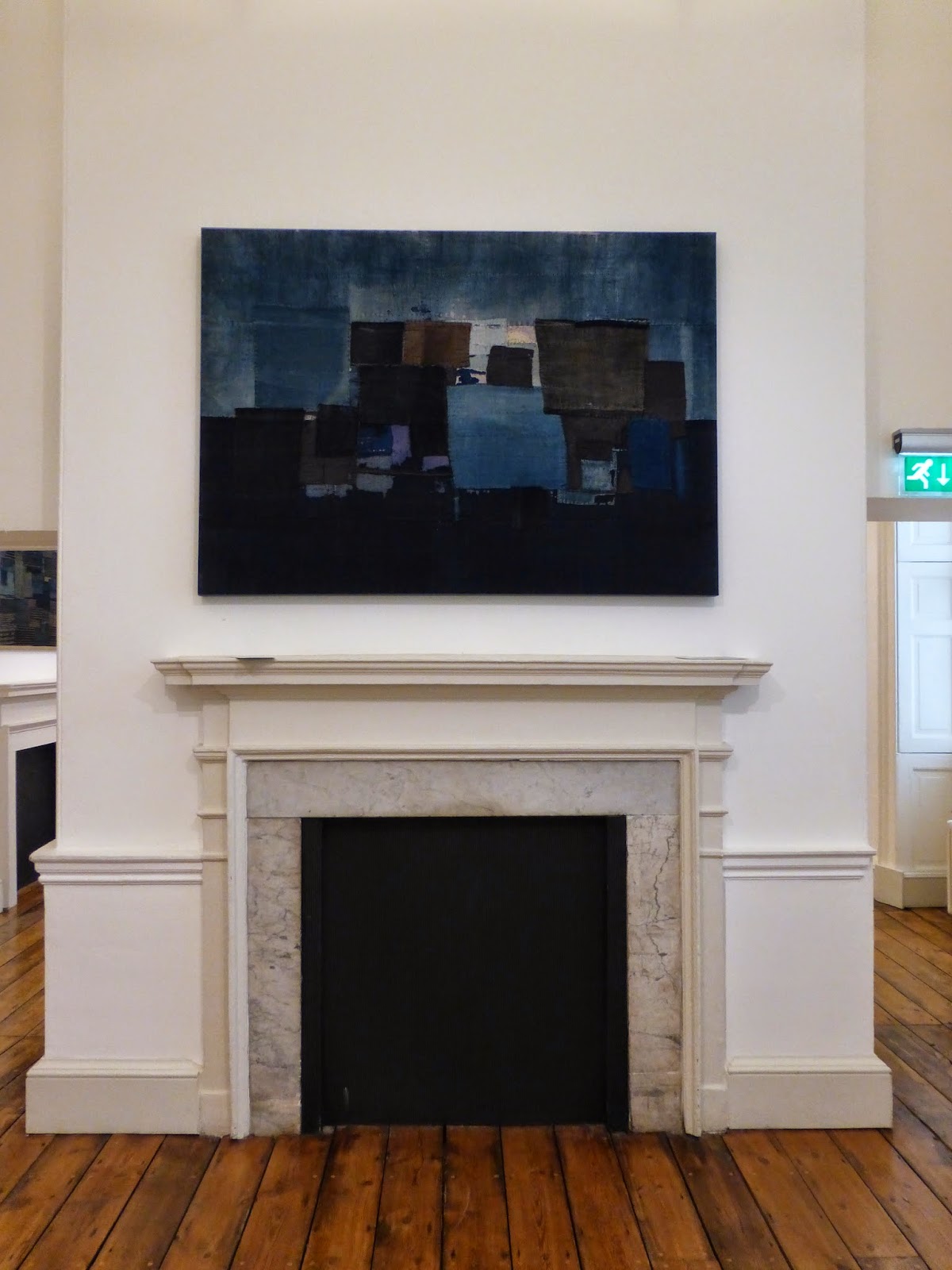 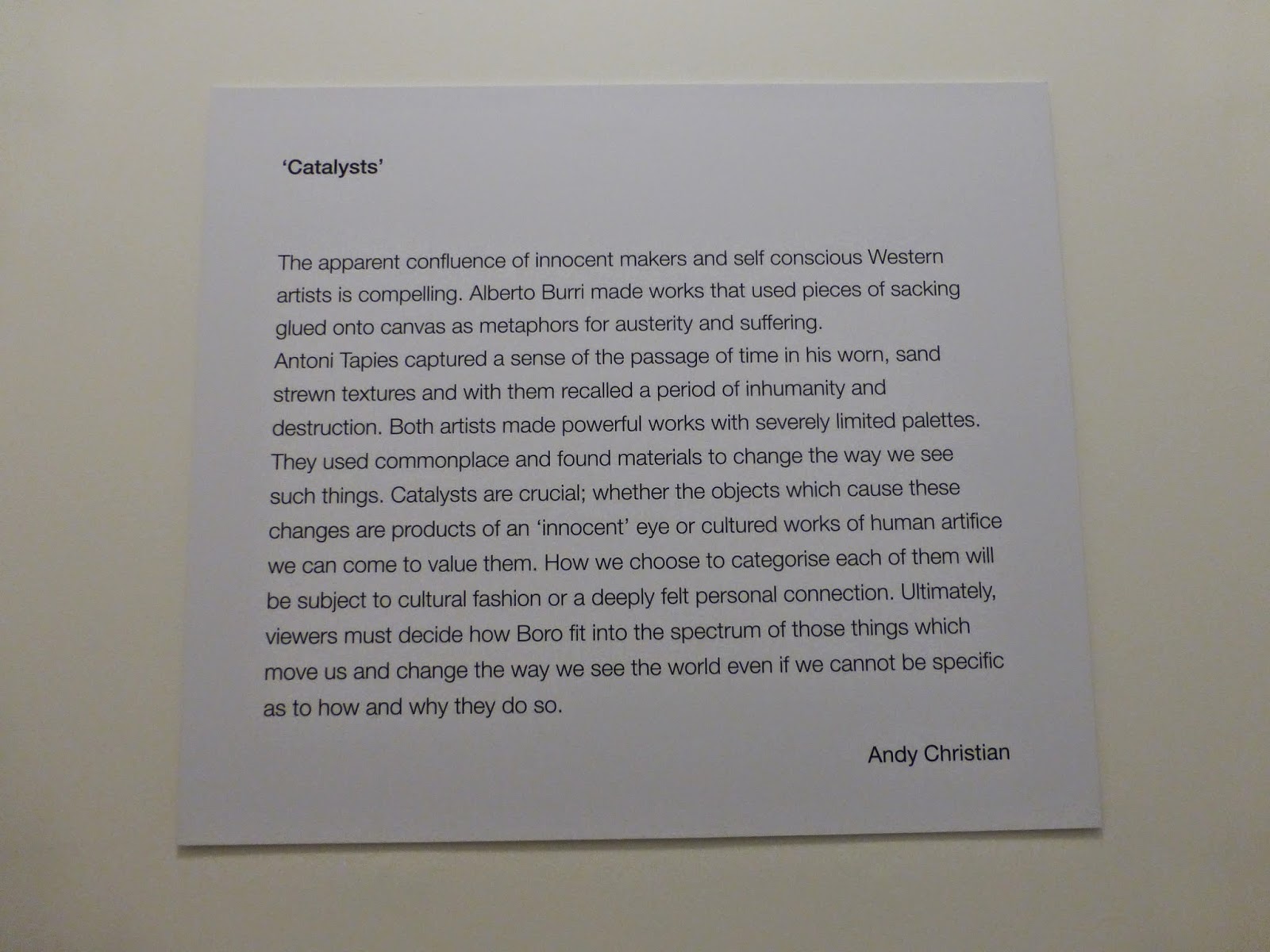 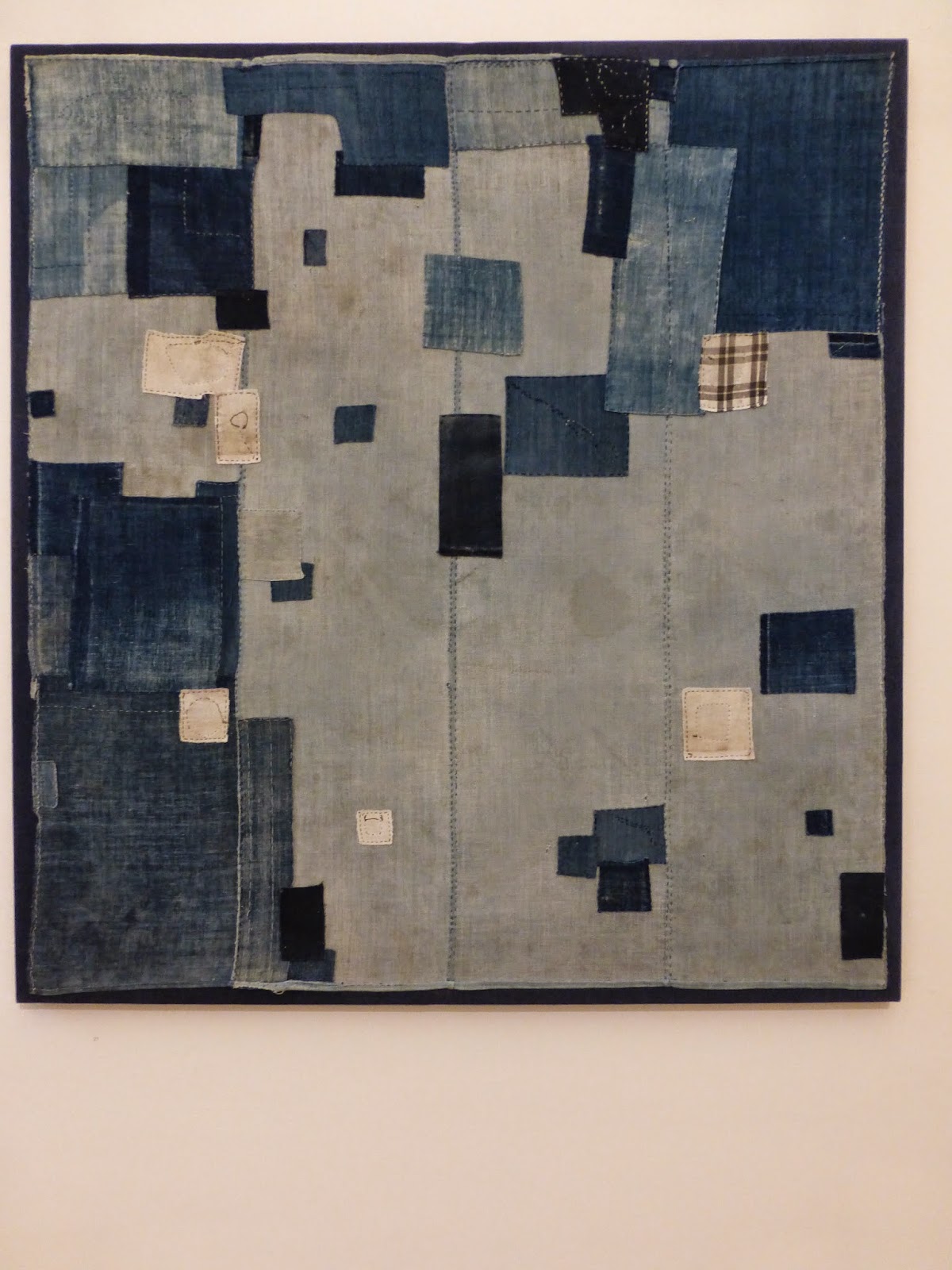 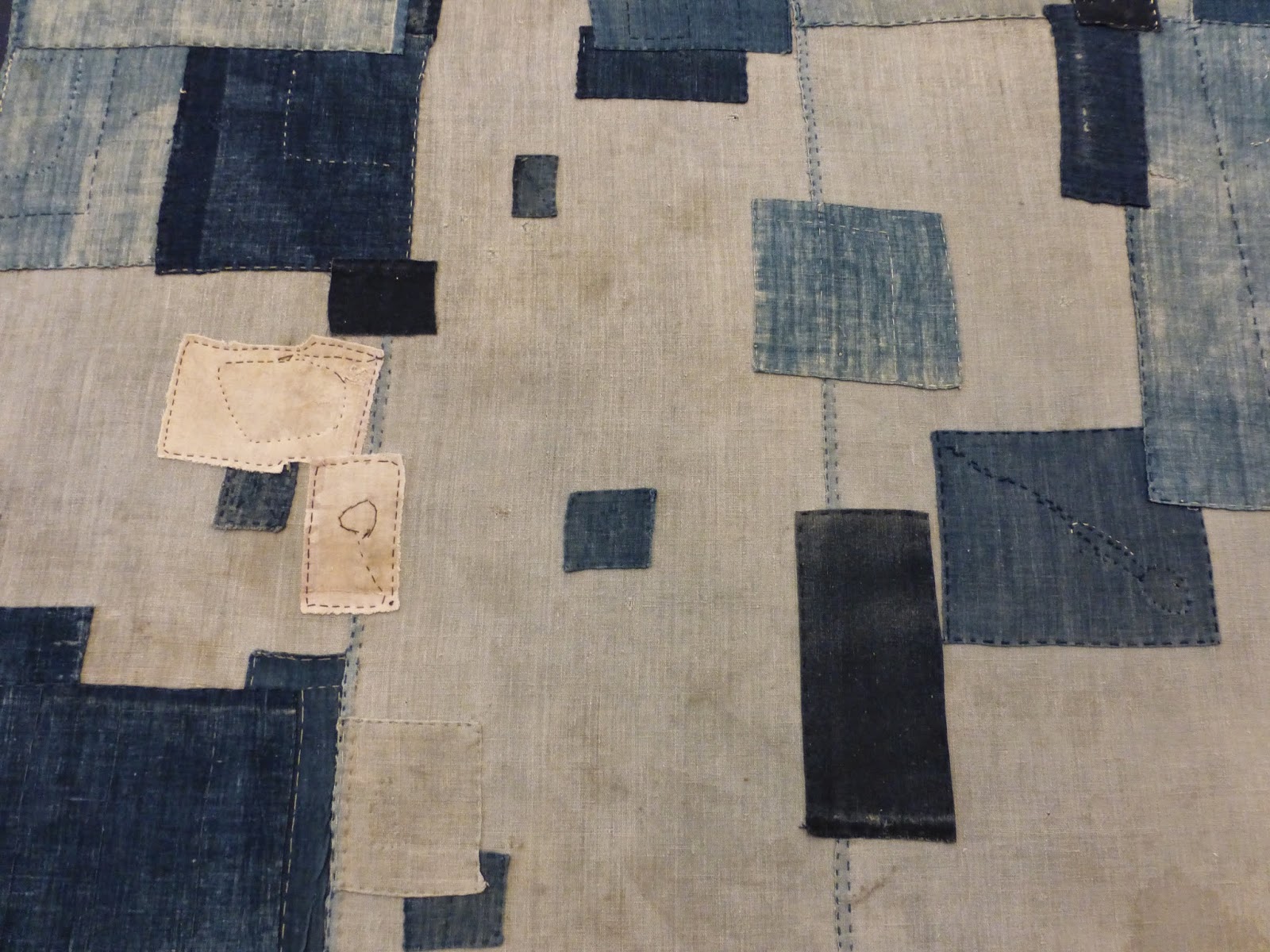 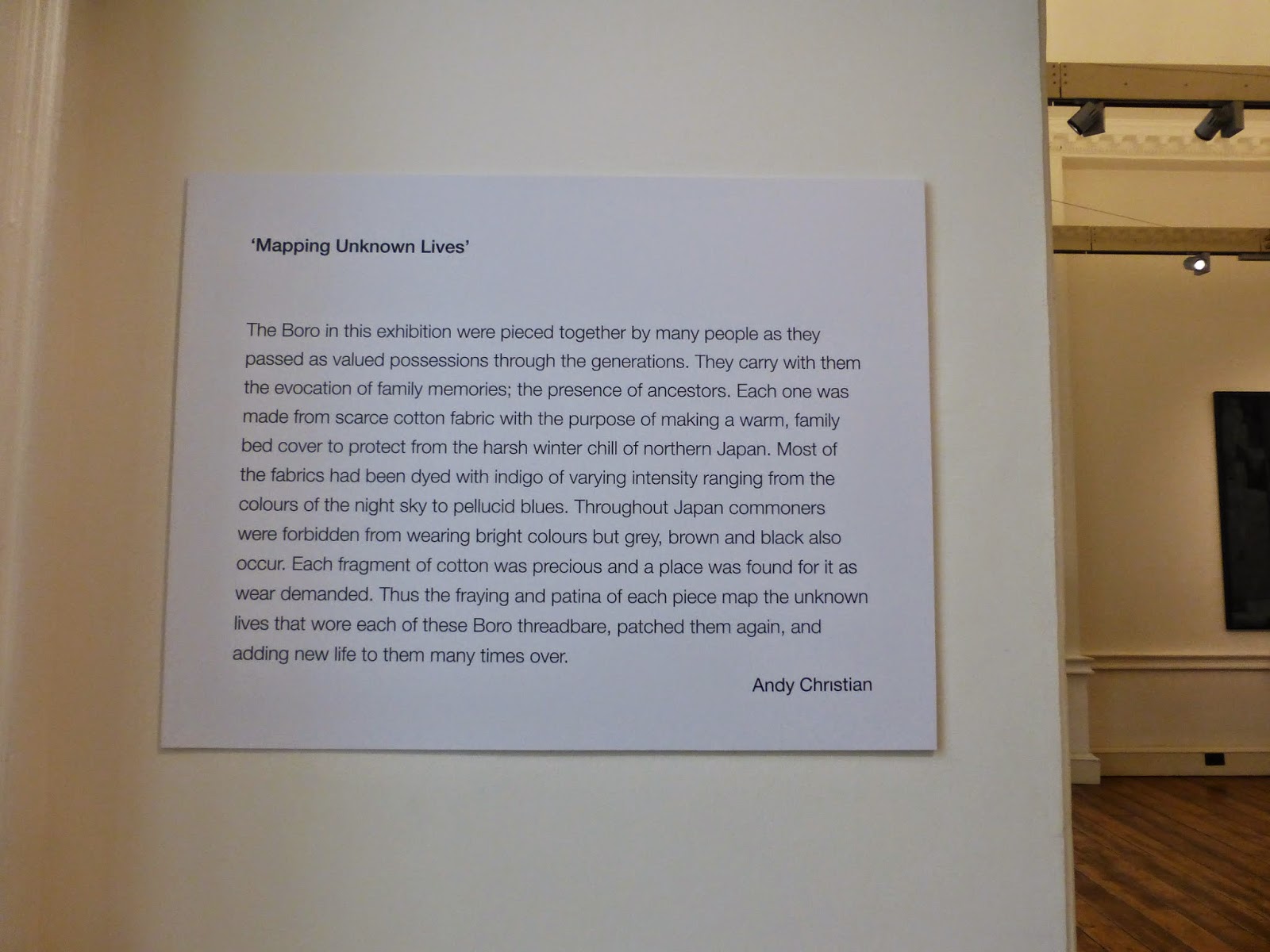 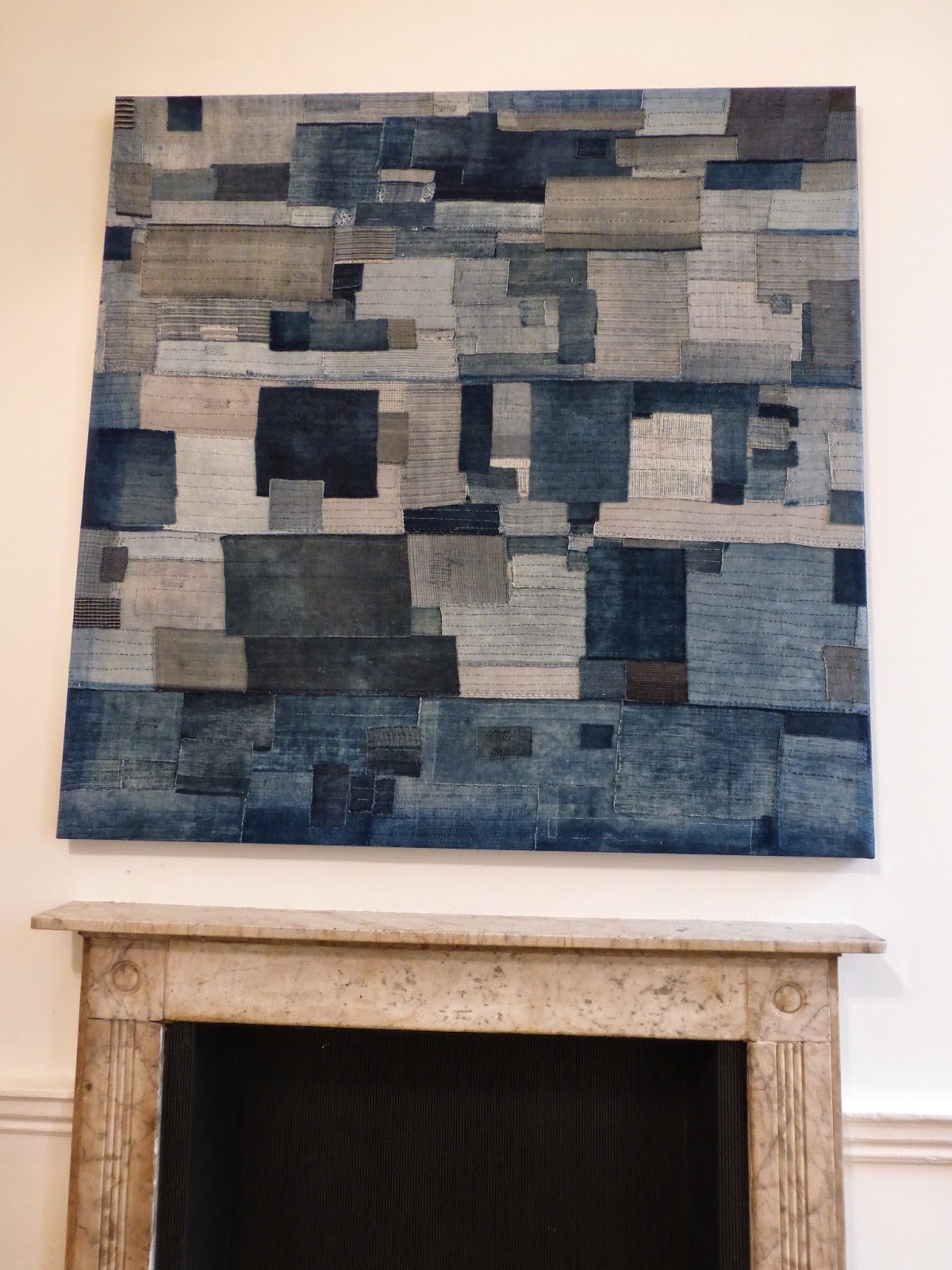 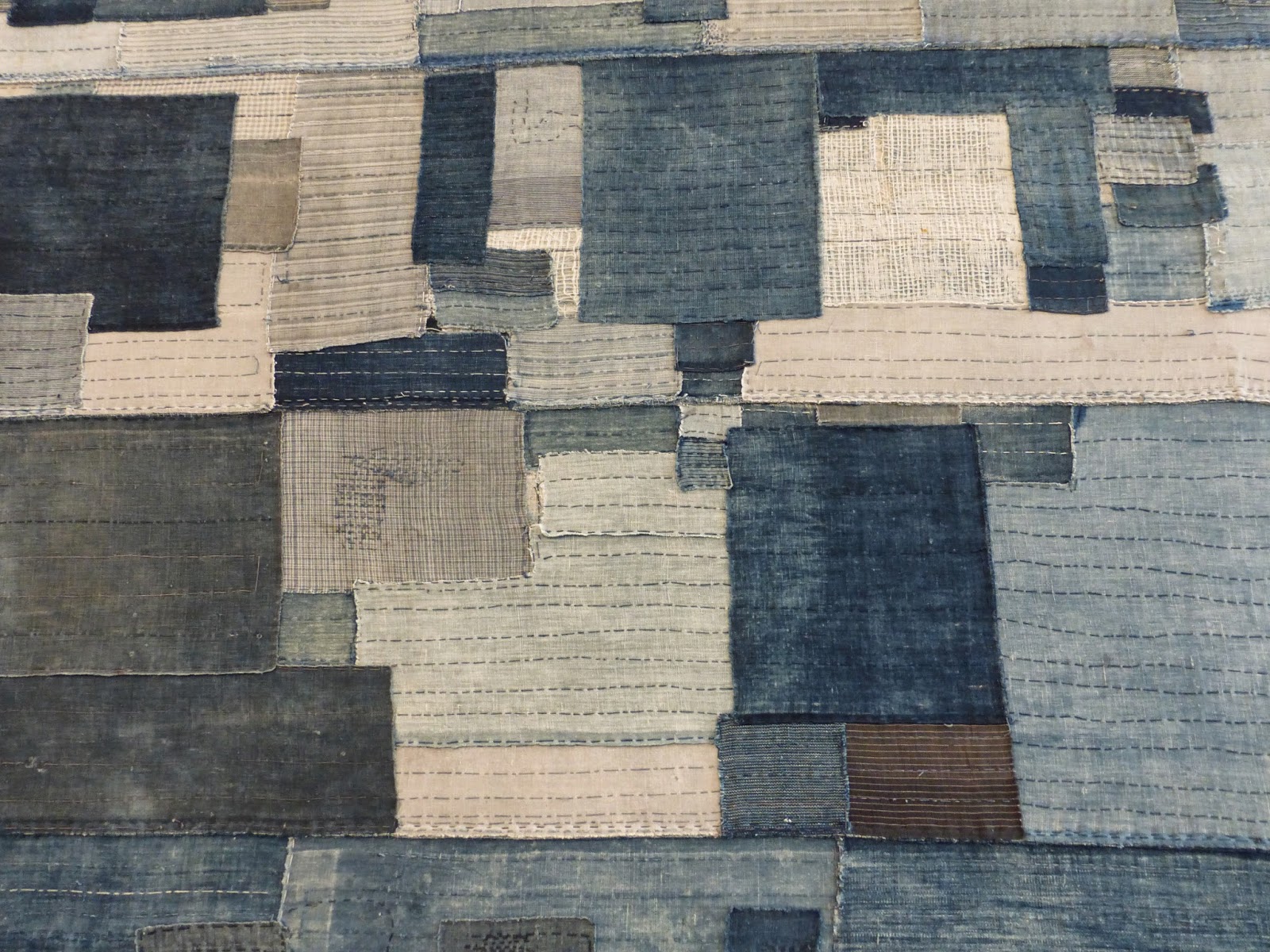 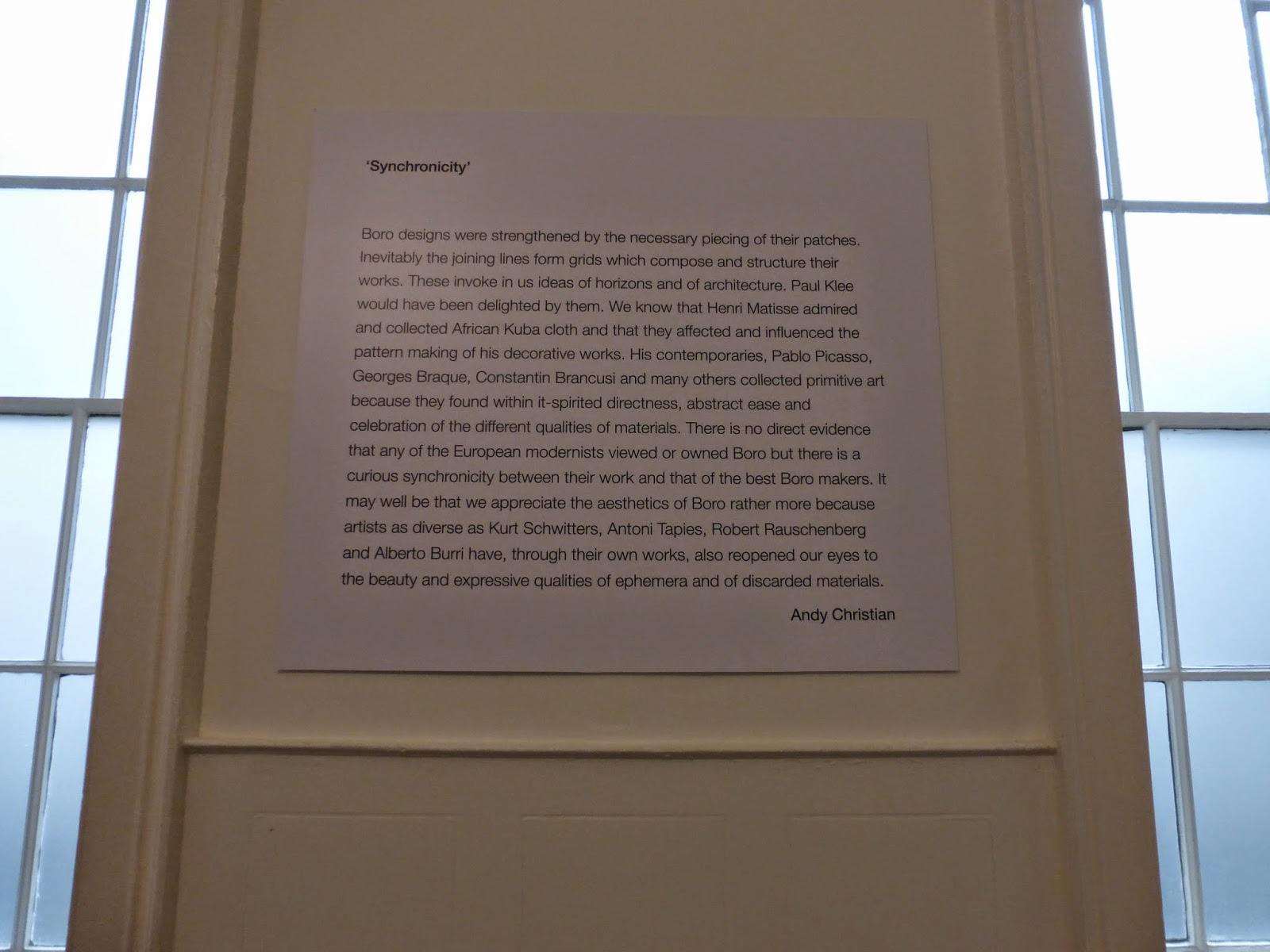 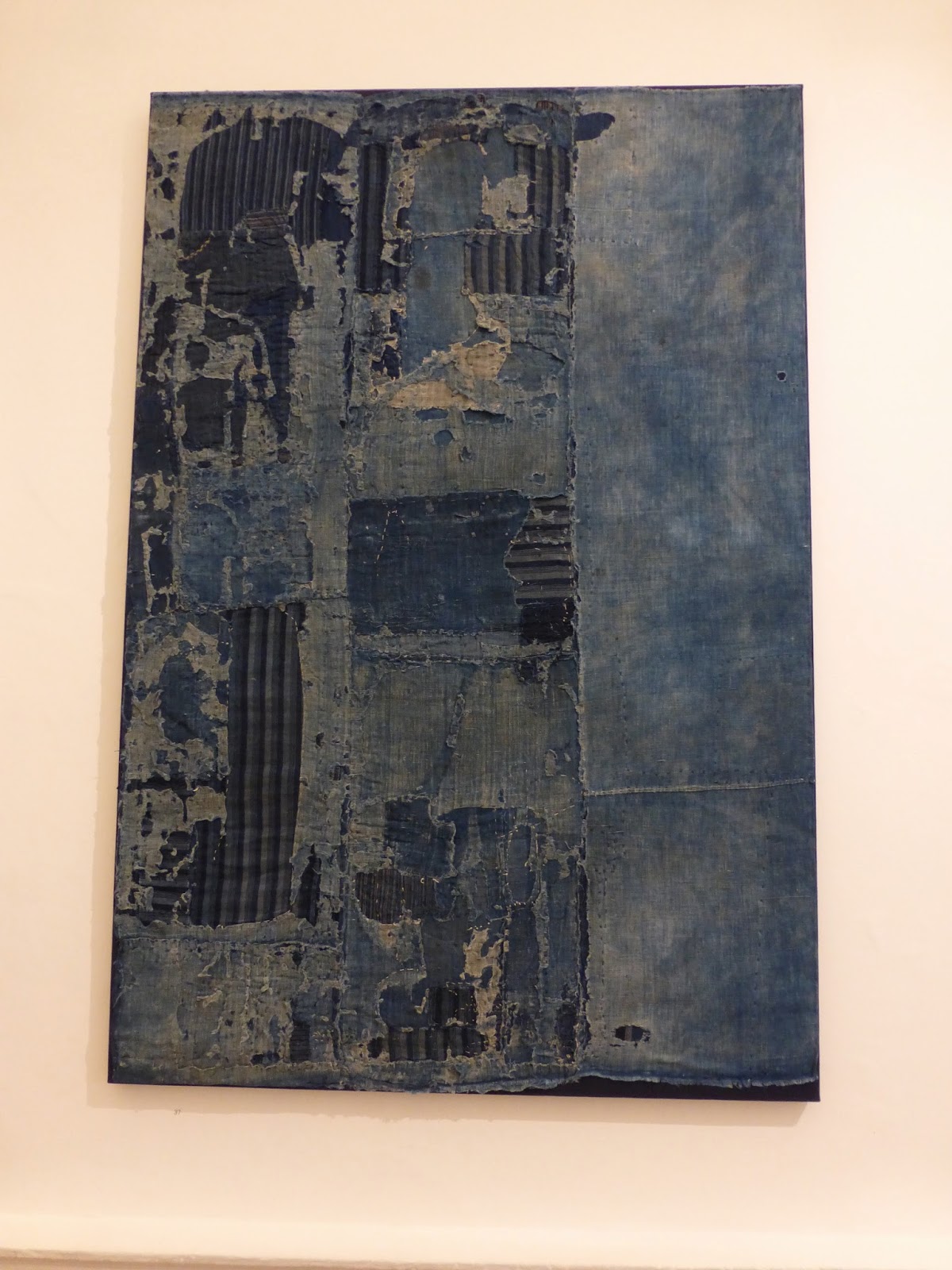 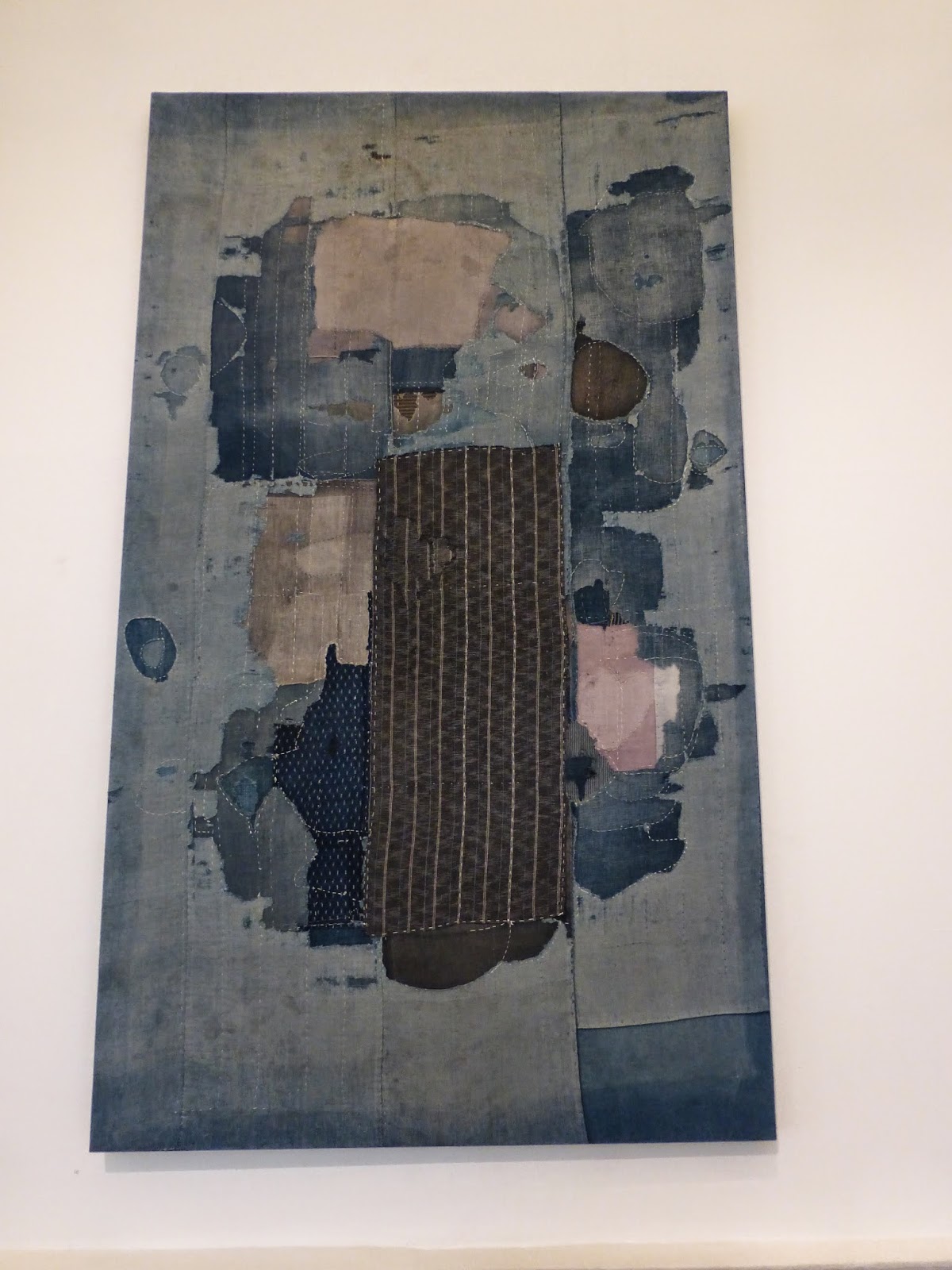 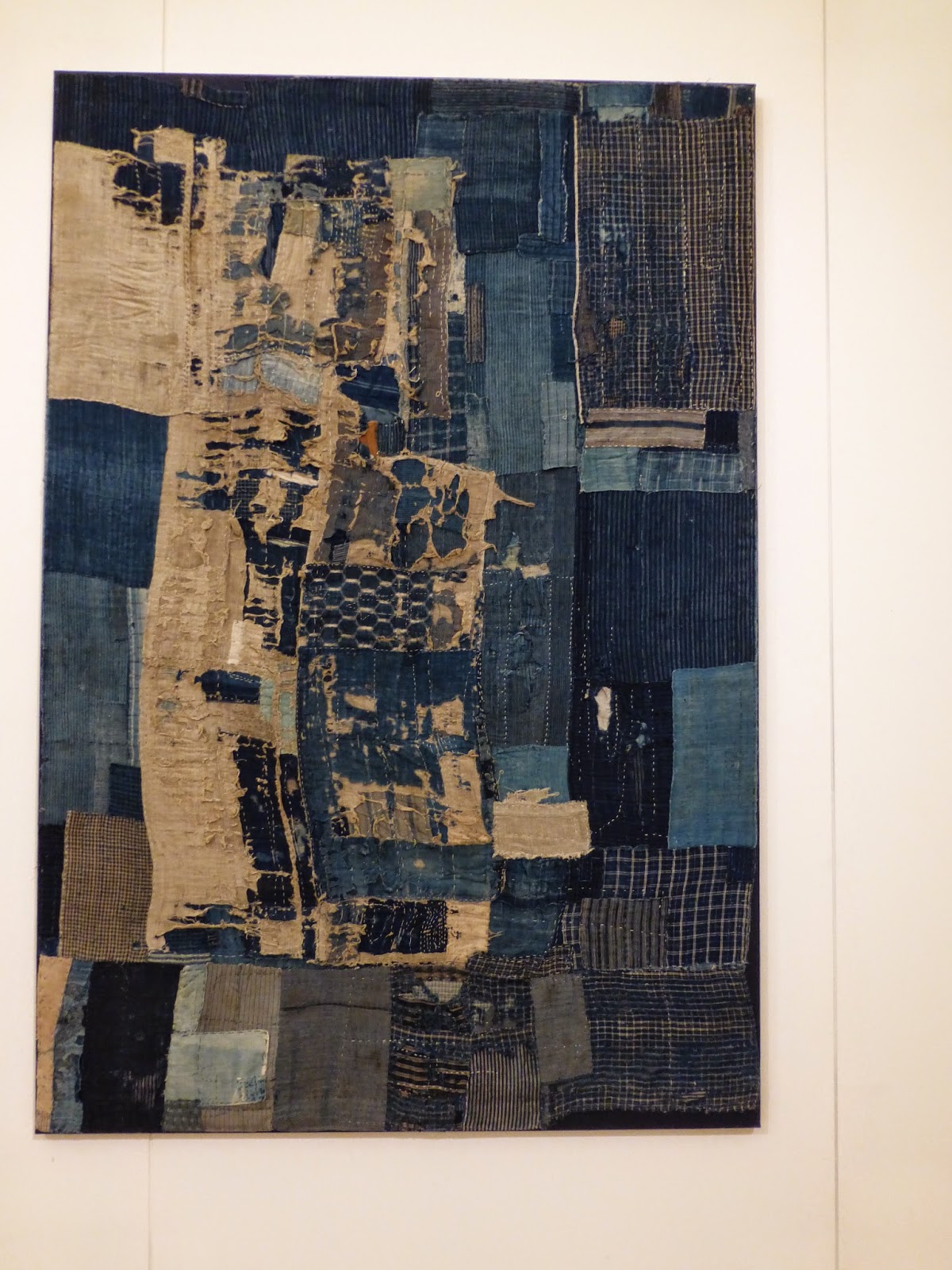 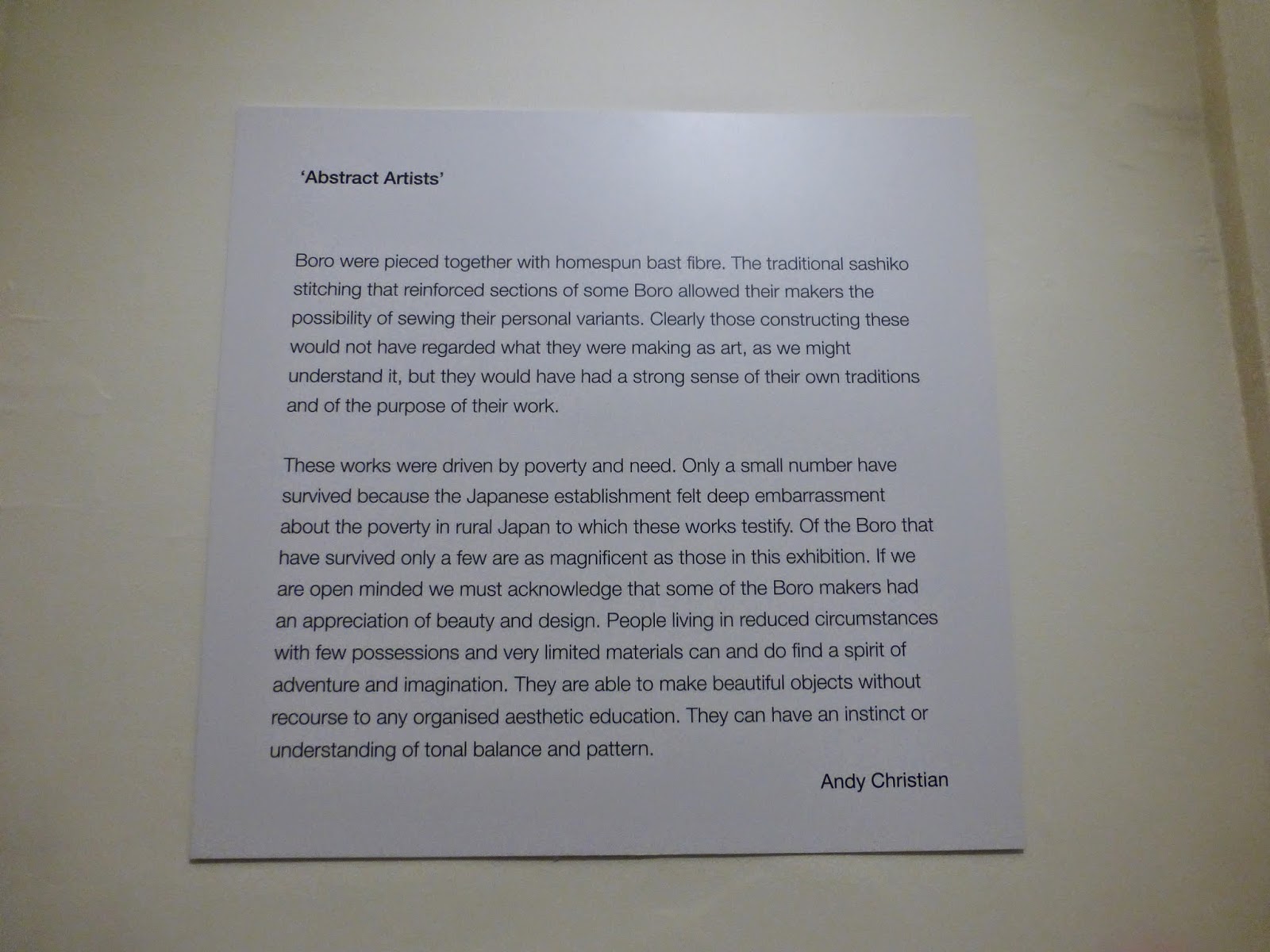 As there was no information on individual pieces, it could be difficult for the viewer to understand their original uses.  While this was obviously the intention, it removed them even further from the people who made and used them - and the marks of wear which are of such textural interest to the viewer loose their original meaning while another one is imposed by their presentation.  The exhibition was fascinating and inspiring, but perhaps if you are interested in the social history of how boro/boromono/ranru were created, you may wish to supplement the exhibition catalogue with "Boro: rags and tatters from the far north of Japan" (the best deal on this book at the moment is to buy via Amazon.jp here - used on Amazon.co.uk starts at over £65 today but you can find a copy at around 6,000Yen on Amazon.jp, although shipping costs are higher).

Vikings at the British Museum was interesting and I'm glad we got to see it before our museum membership ran out (no need for a timed ticket).  I went to the 1980 Vikings exhibition too.  This time, a lot of the smaller pieces were displayed in recessed wall cabinets, which made viewing difficult as two or three people effectively blocked the view for others - in 1980, I remember central glass cases, and a less crowded exhibition (although I went to see that on a Saturday).  Also the linear exhibition layout bottlenecked right at the start this time - the same thing happened with the Pompeii exhibition last year.  Although the exhibition set out to "place warfare and warrior identity at thecentre of what it meant to be a Viking", there seemed to be more emphasis initially on the Vikings as traders and settlers, whereas the 1980 exhibition (if I remember right) seemed to have focus more on the Vikings as warriors.  Weaponry, ships and beliefs were left to the final room, which housed the remains of the longship Roskilde 6 in a massive metal skeleton cradle, on loan from the Viking Ship Museum. Read some reviews with photos here , here and here.  There will be a cinema screening of the exhibition on 24th April and the exhibition is open until 22nd June 2014. Watch a video clip of the exhibition here.

Vikings was interesting but I am really glad we didn't miss Boro, which continues until April 26th.

Thankyou fo that we are going up to Somerset house next week, glad you like the book