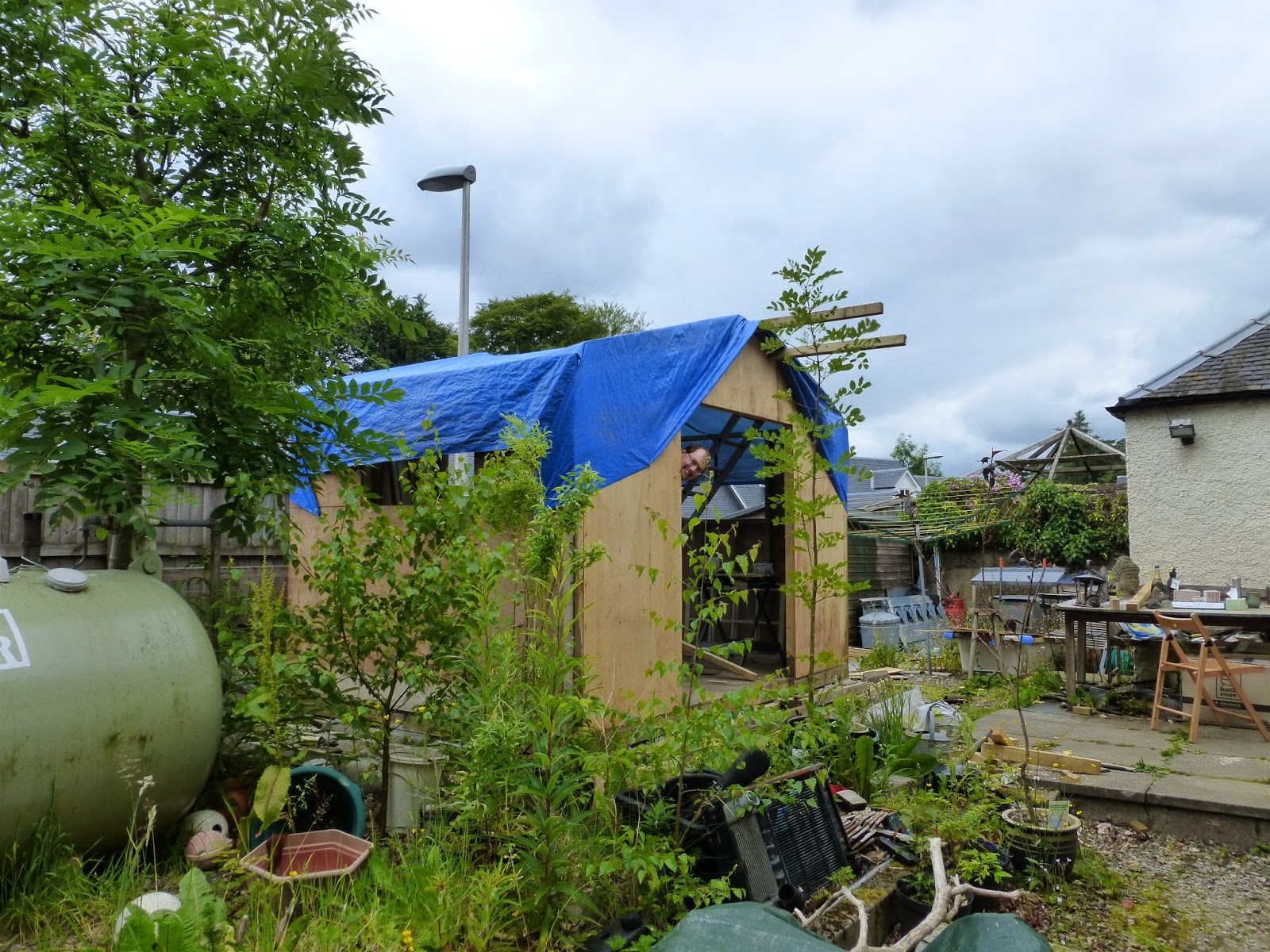 While I was away teaching the Quilters' Guild's Traditional Quilt Group last weekend, Glyn got the summerhouse walls up, plus the first of the rafters, all on his own. 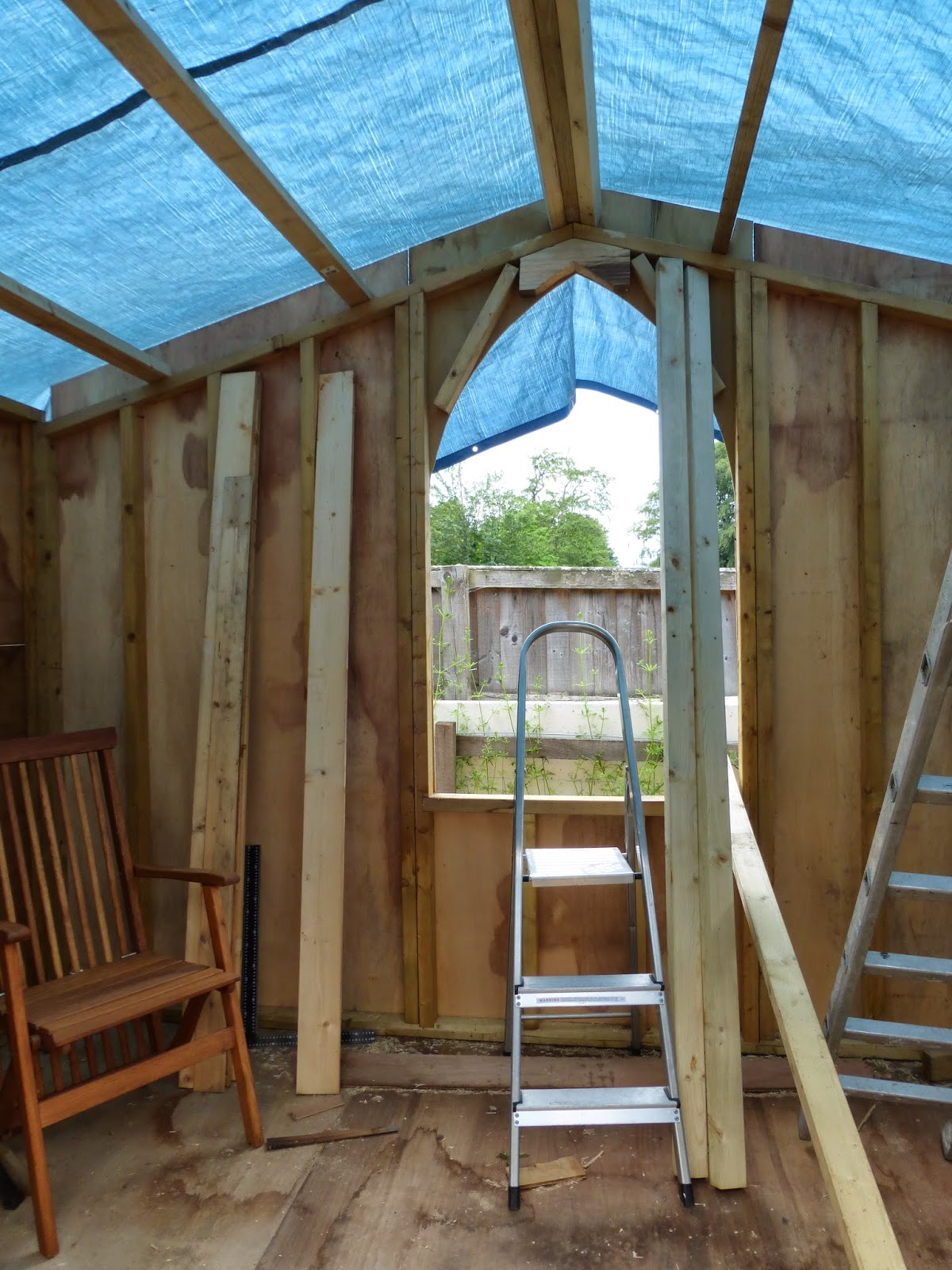 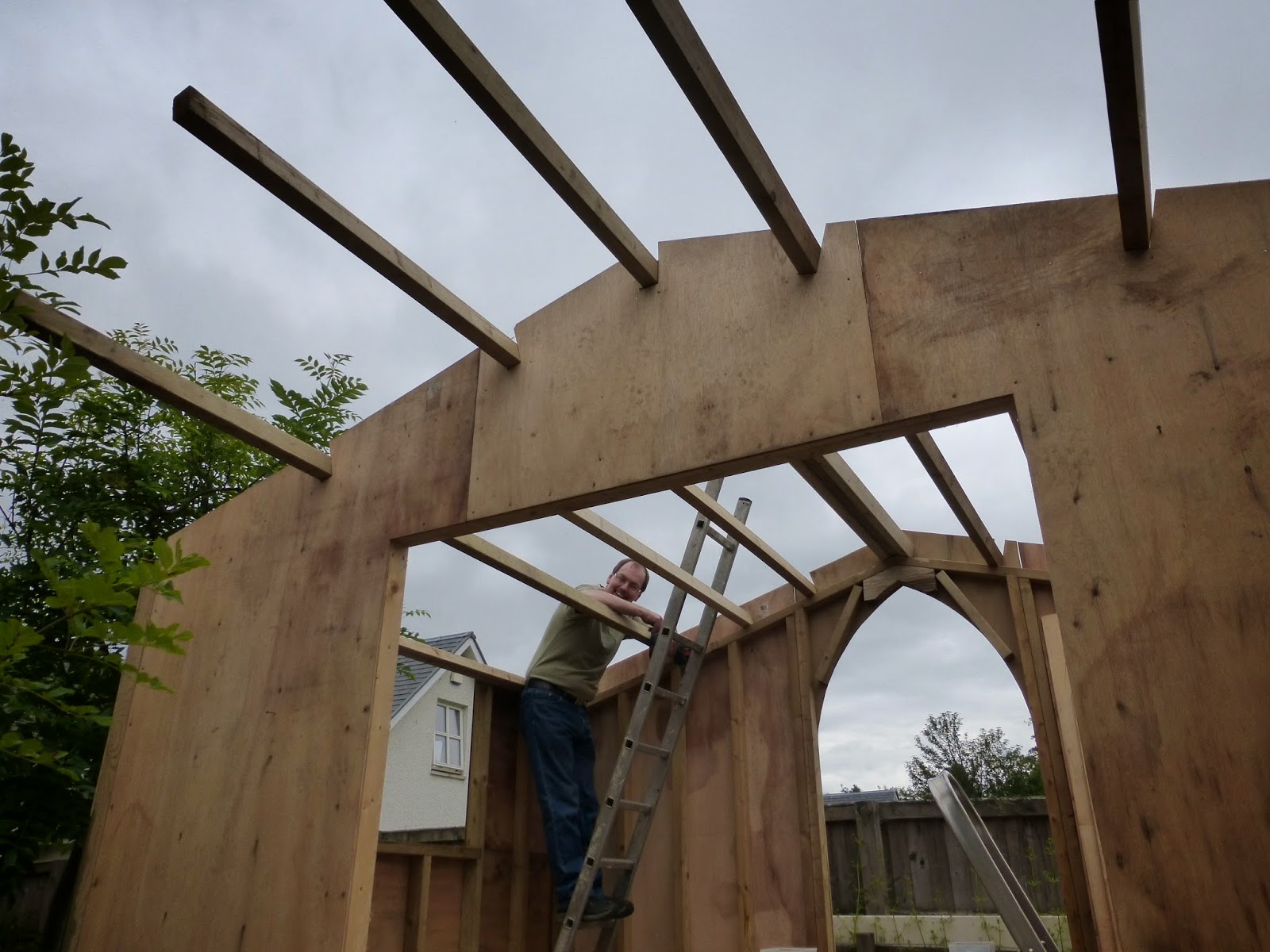 10mm plywood panels go on top of the rafters. 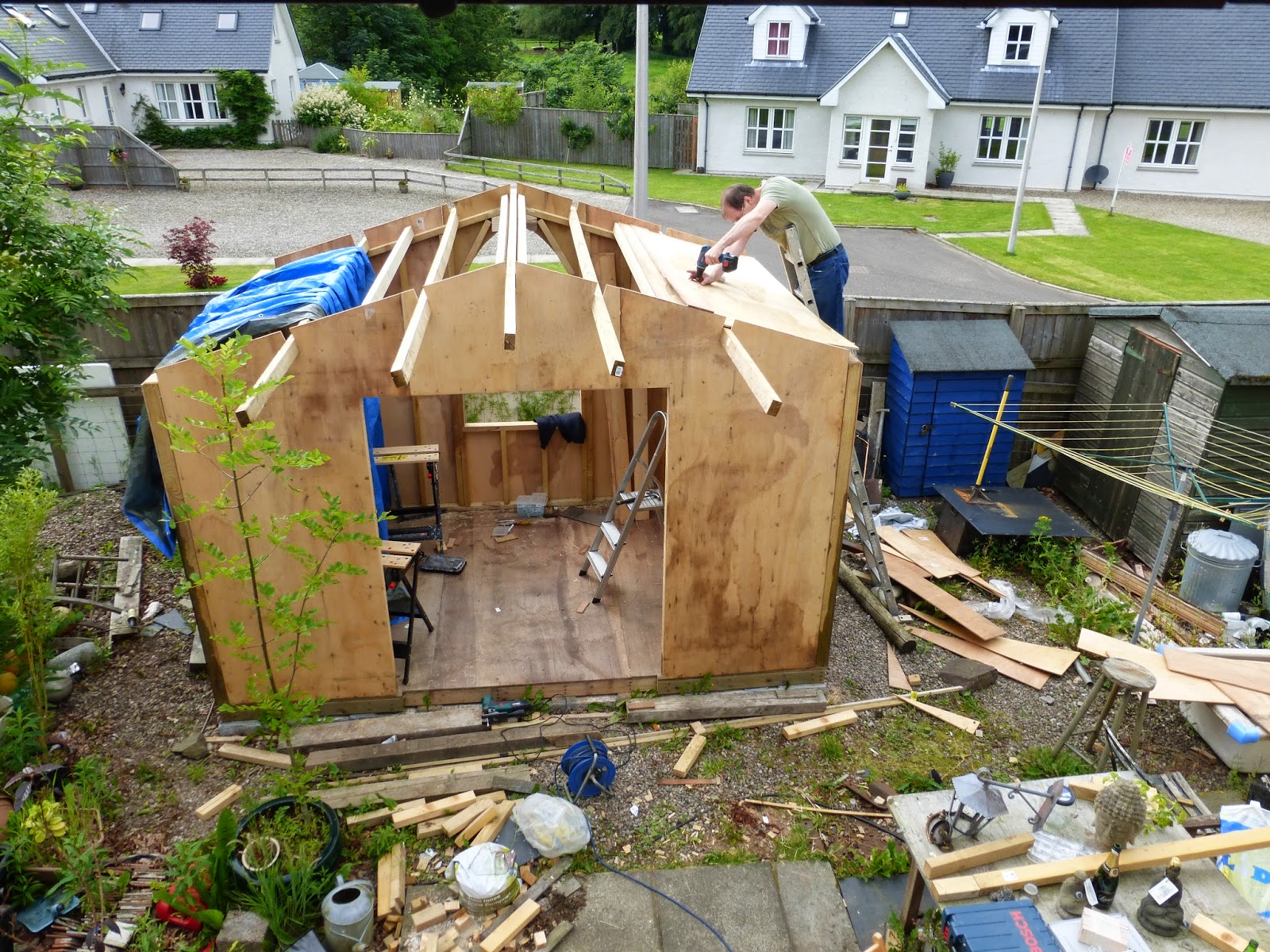 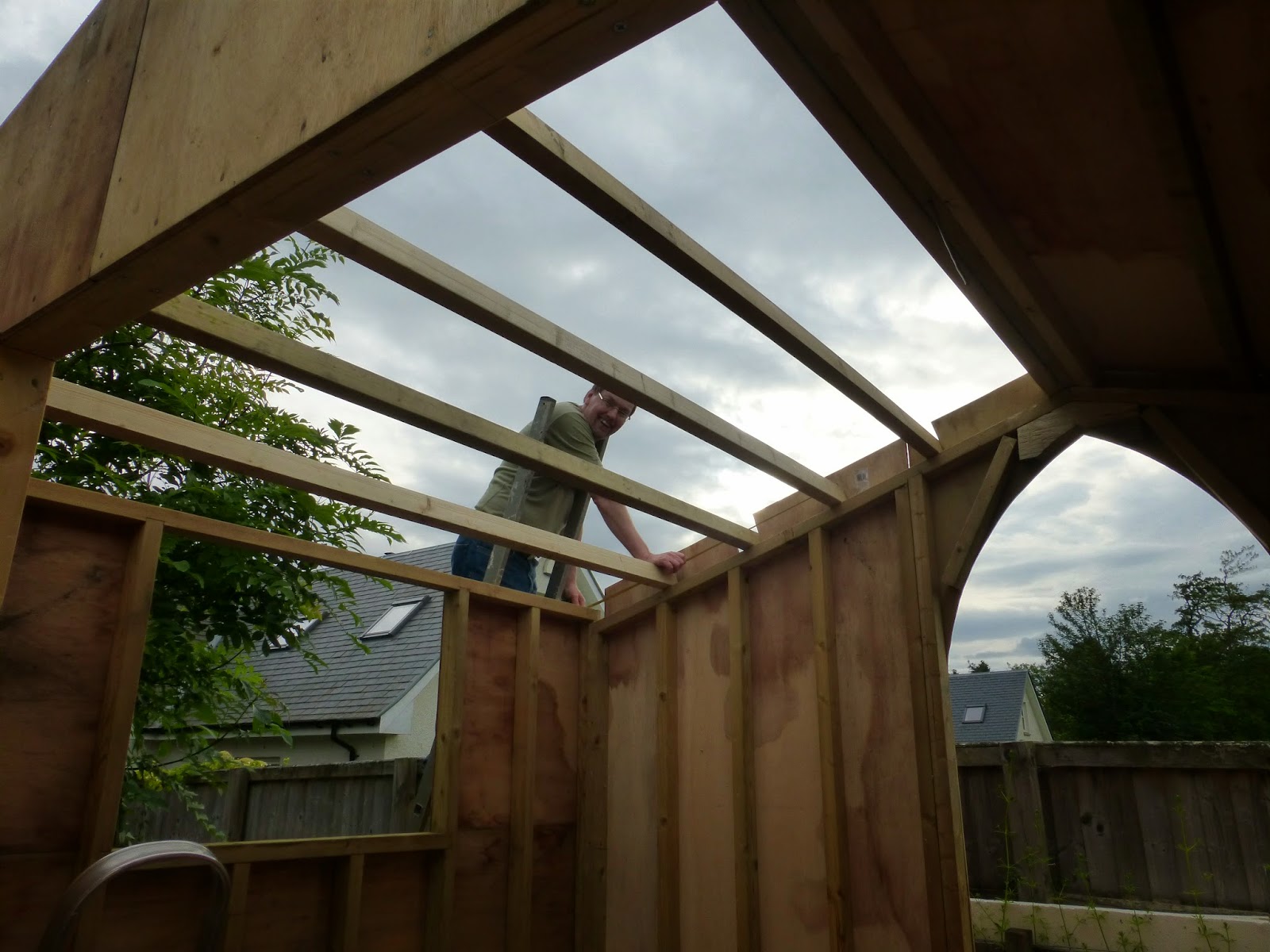 Glyn demonstrates how to pivot a plywood sheet onto the roof. 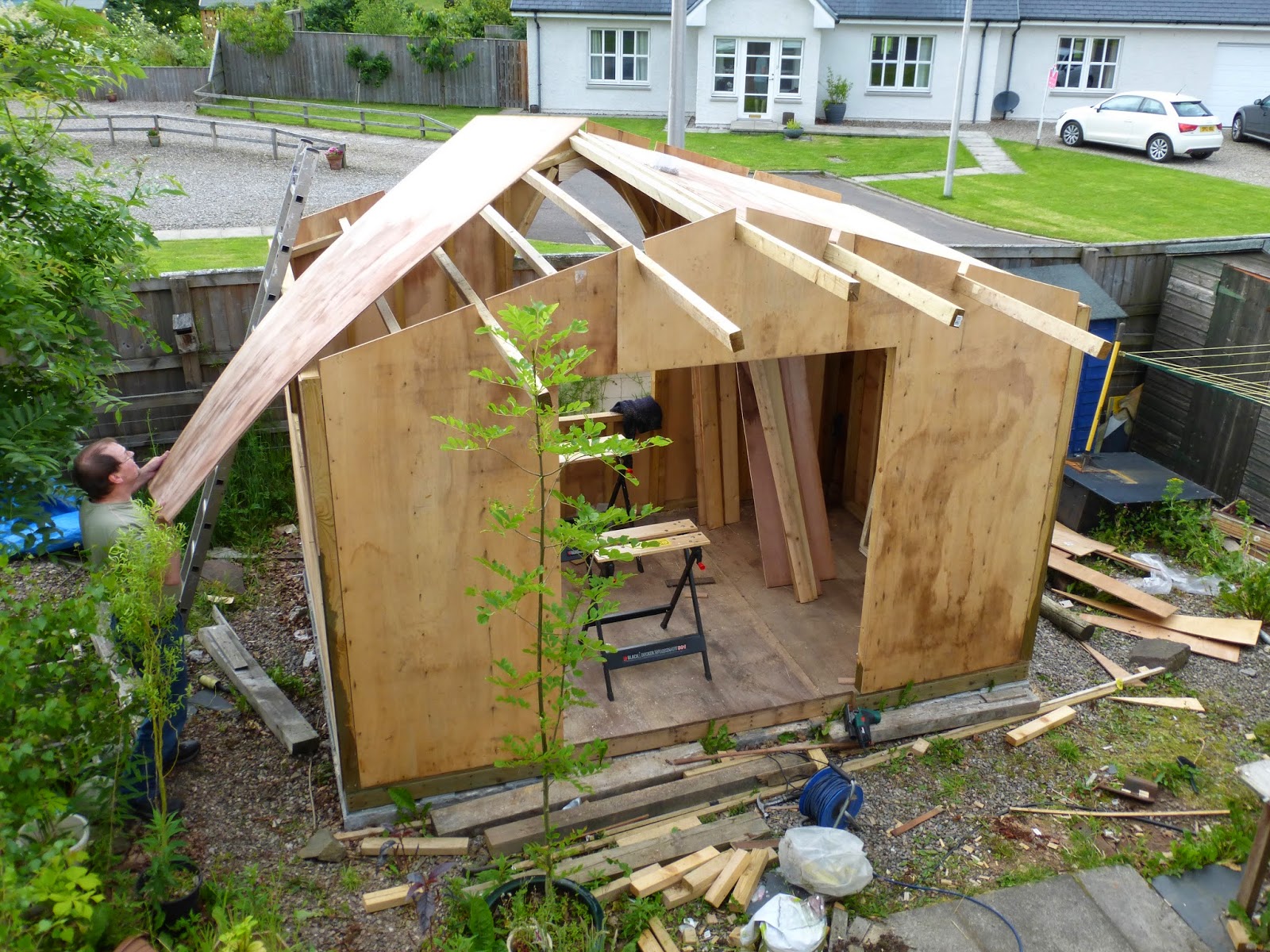 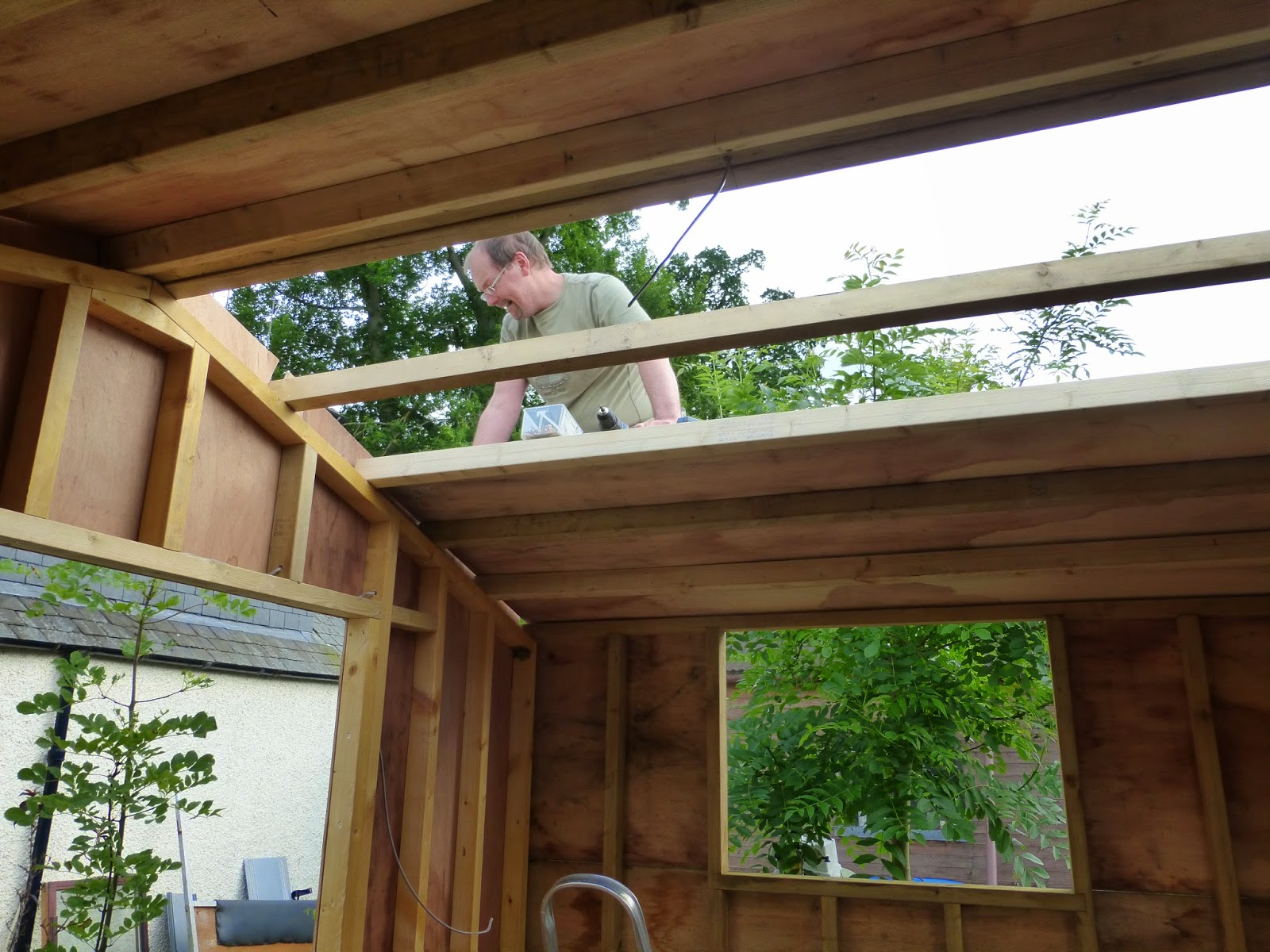 Done! The plywood will have a layer of Tyvek on top, then 2in polystyrene sheet, topped off with galvanized corrugated iron.  We thought about having a sedum roof, but they weigh so much, the summerhouse frame would have needed to be at least 4 x 5in rather than 2 x 3in to support the extra weight.  It isn't as if we have removed any plants to build the summerhouse in the first place, because the back yard is was just gravel before we started.  I also looked in to those faux tile effect roofing sheets used for caravans, but the cost was double that of the wriggly tin by the time shipping from the Midlands was added (it all seems to be made down there), so we shopped locally instead and got the roofing from Dundee. 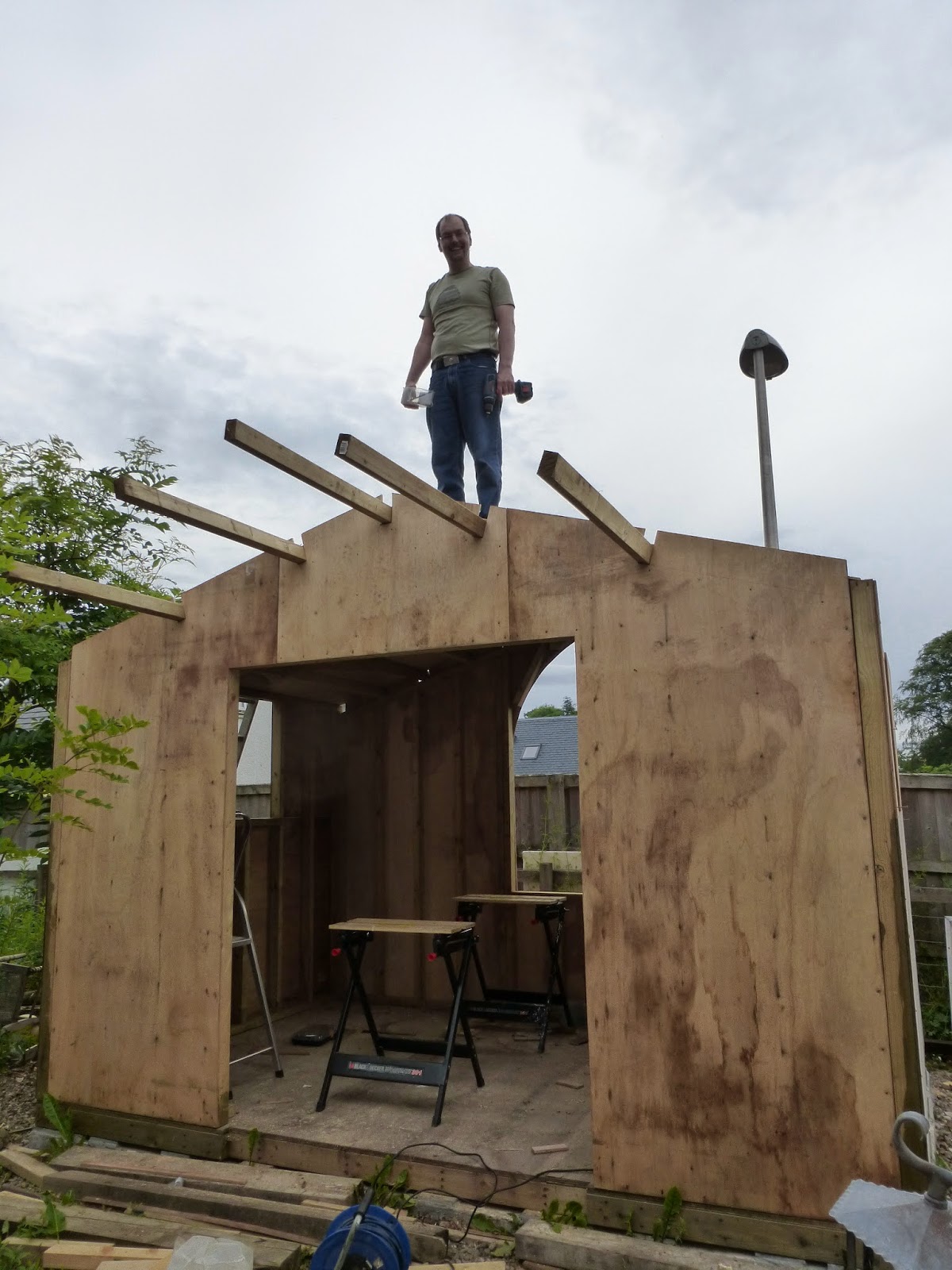 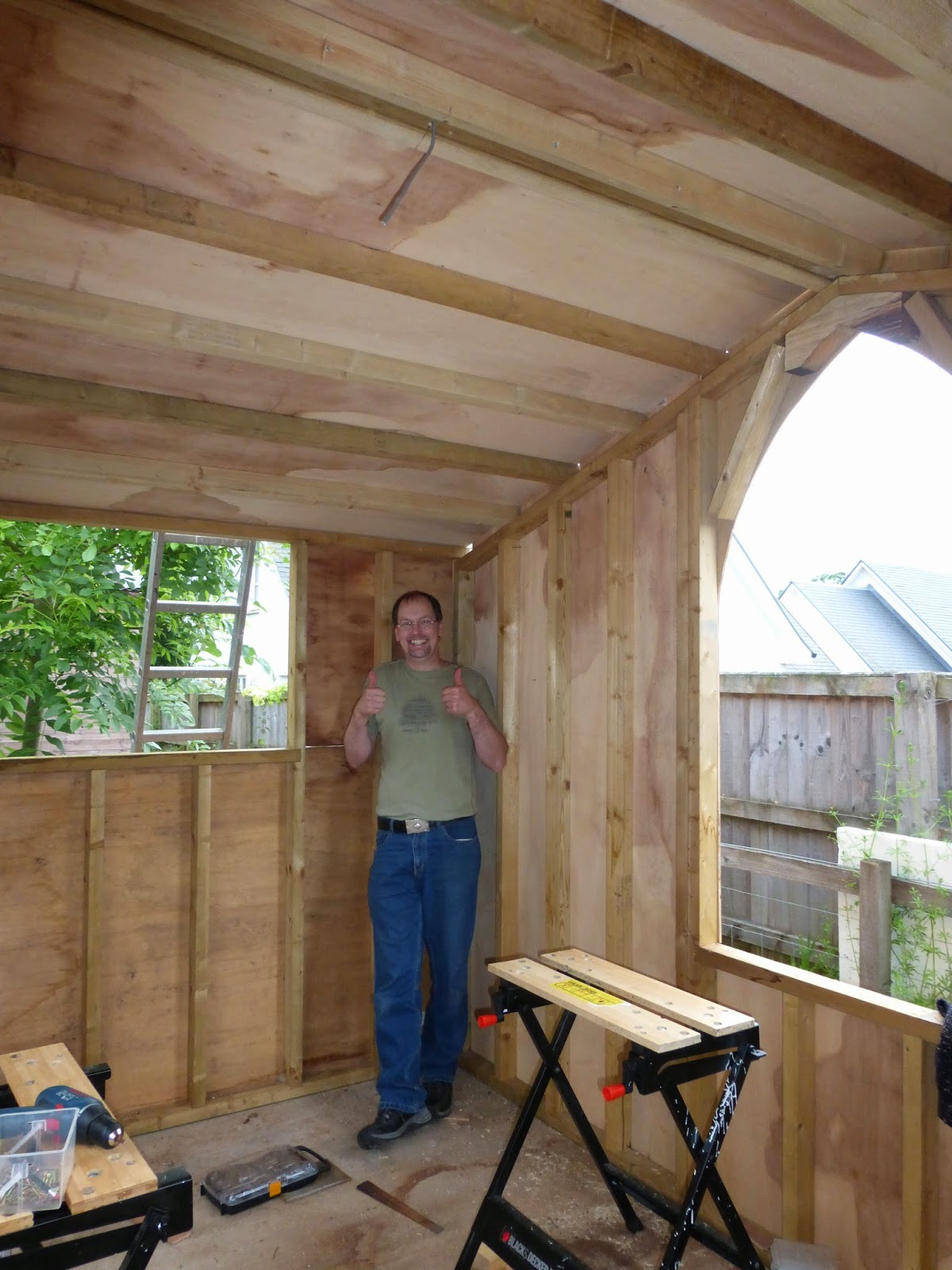 We celebrated getting the roof paneling in place by having Sunday dinner in the summerhouse - roast lamb with roasted plum tomatoes, peppers, courgettes and red onion.  Yummy!  The last two photos were taken at about 9.30p.m., which gives you an idea just how long the evenings are here at the summer solstice.  The 'dining table' was a plywood offcut on top of the workmate benches. 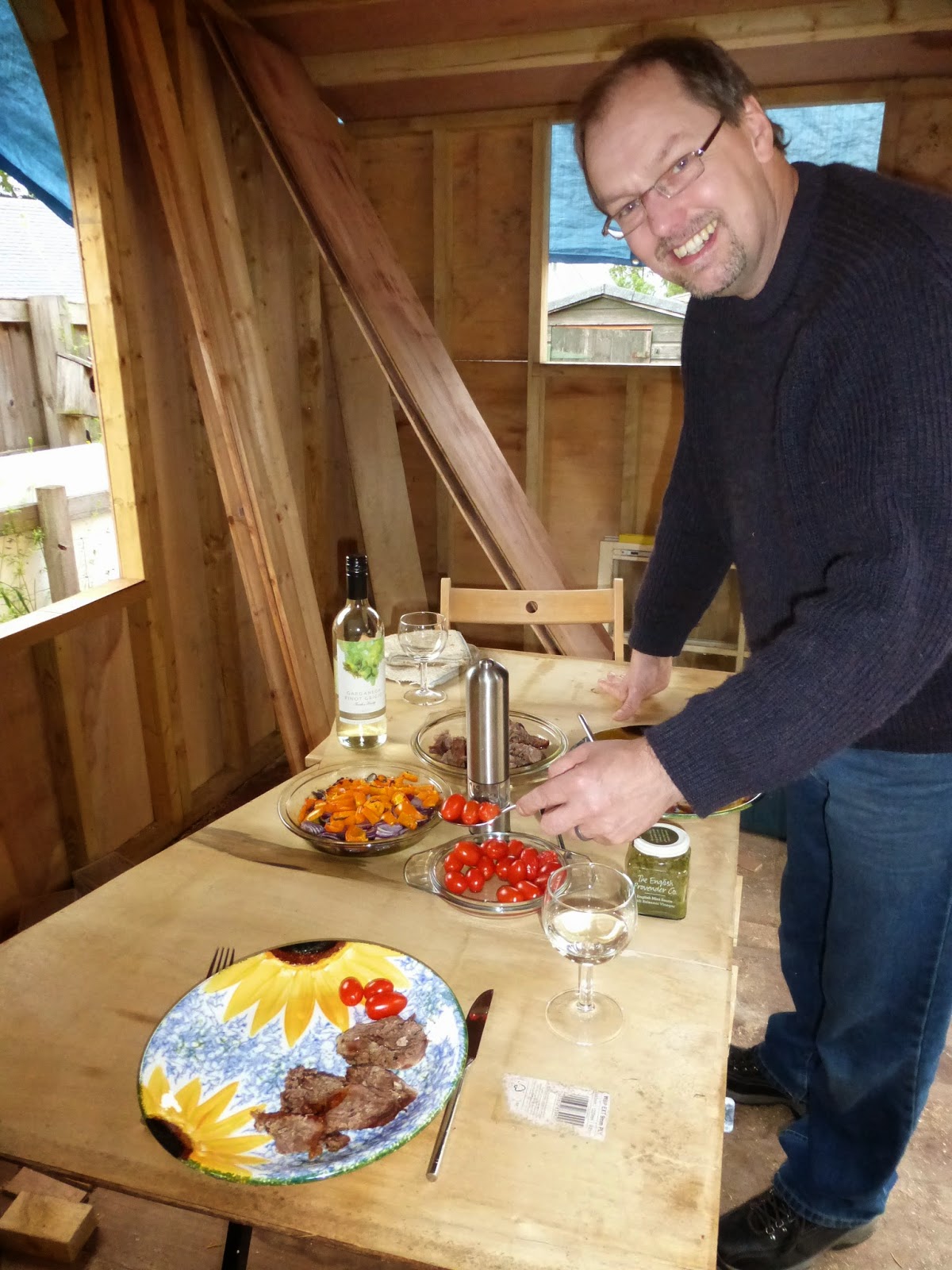 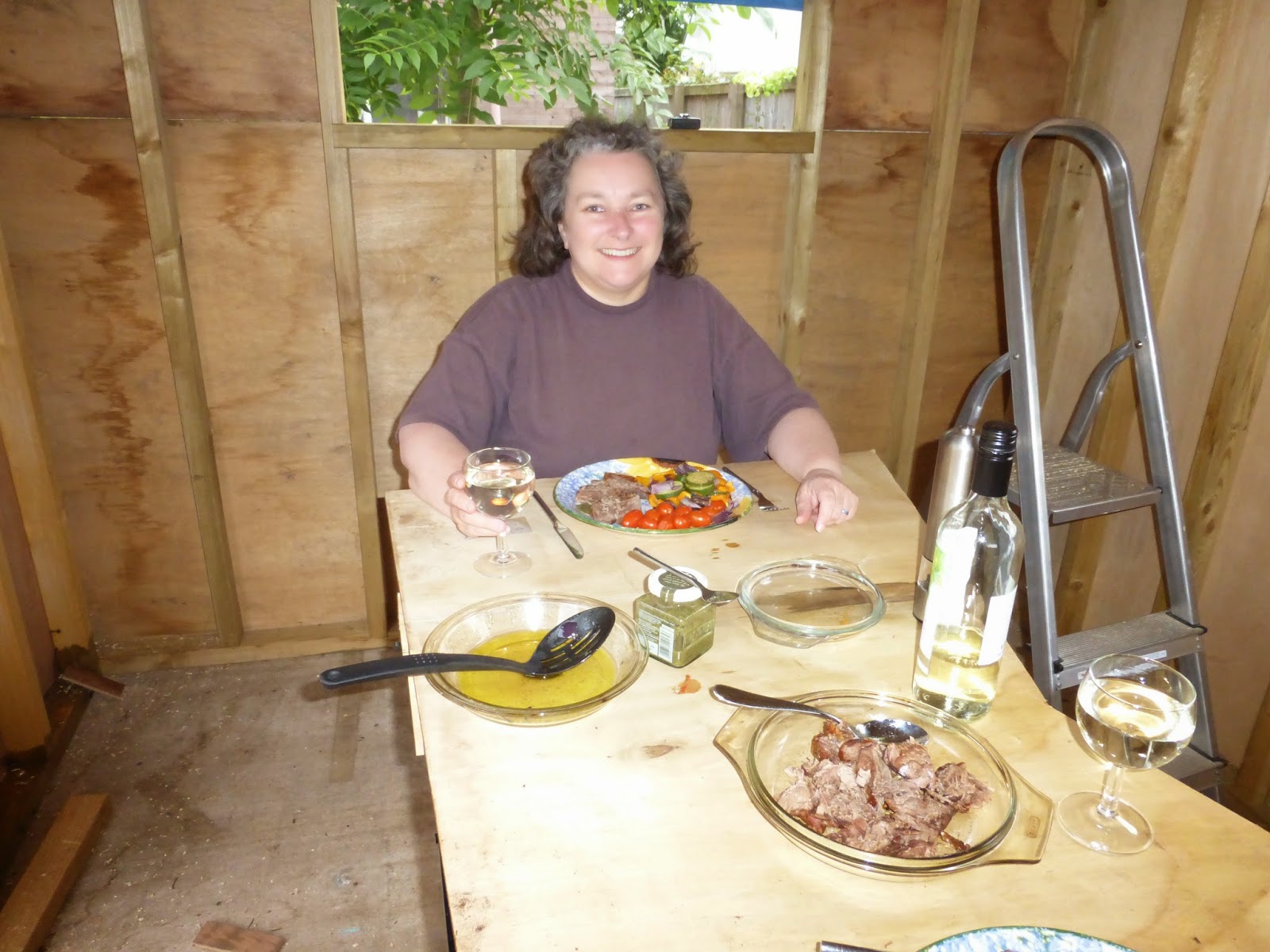 The Tyvek arrives this afternoon, so we hope to get the building 'wrapped' next, then the rest of the roof installed.
Posted by Susan Briscoe at 12:13