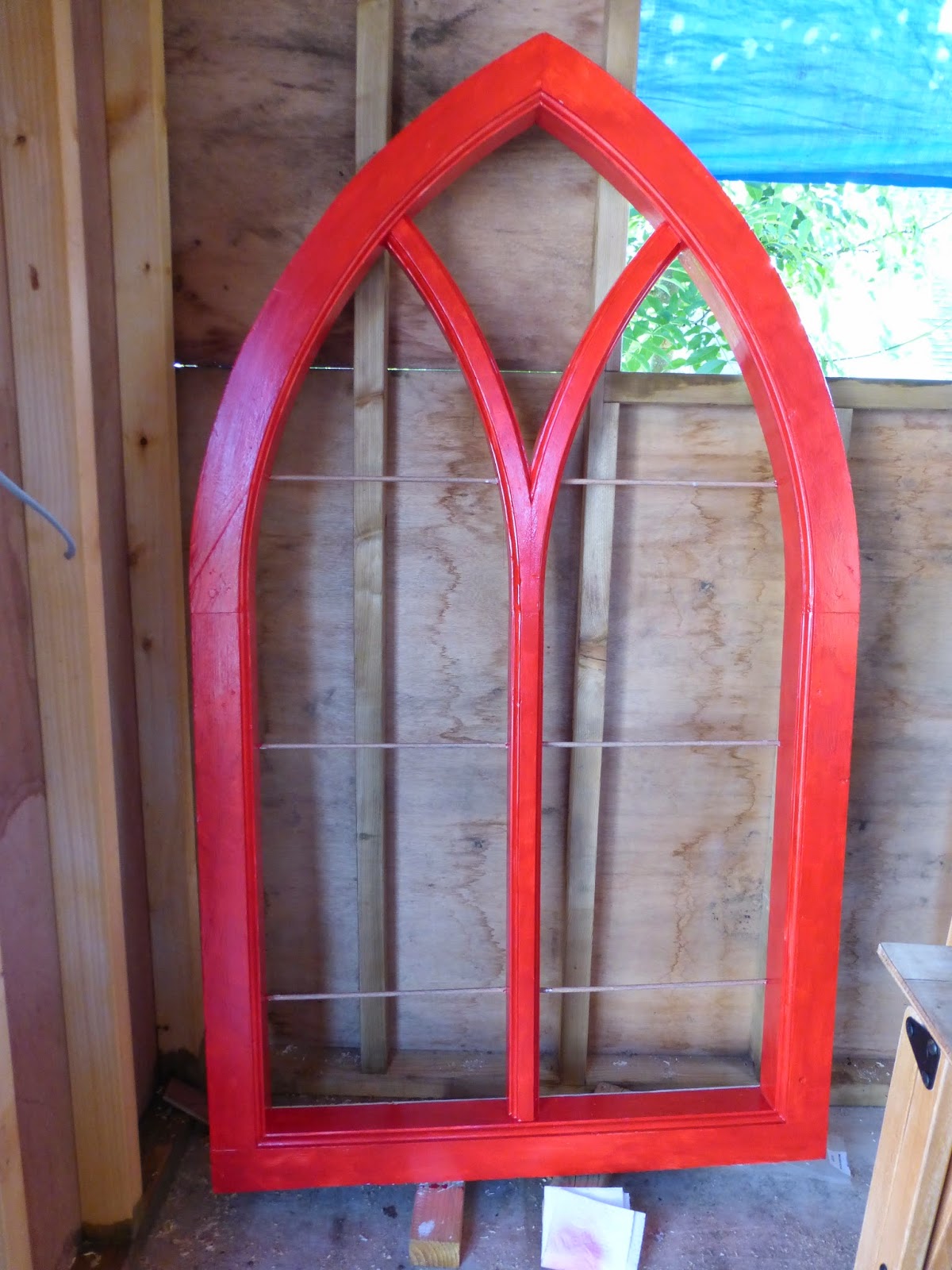 There have been lots of small jobs to do before getting the Tyvek wrap around the building.  Painting the gothic window frame red wasn't a top priority, but the weather was so wet during the daytime last week, it was a job I could do while it was raining outside.  It has taken two coats of primer and one of white satinwood to knock back the blue paint, and three coats of red satinwood to build up to an even colour. 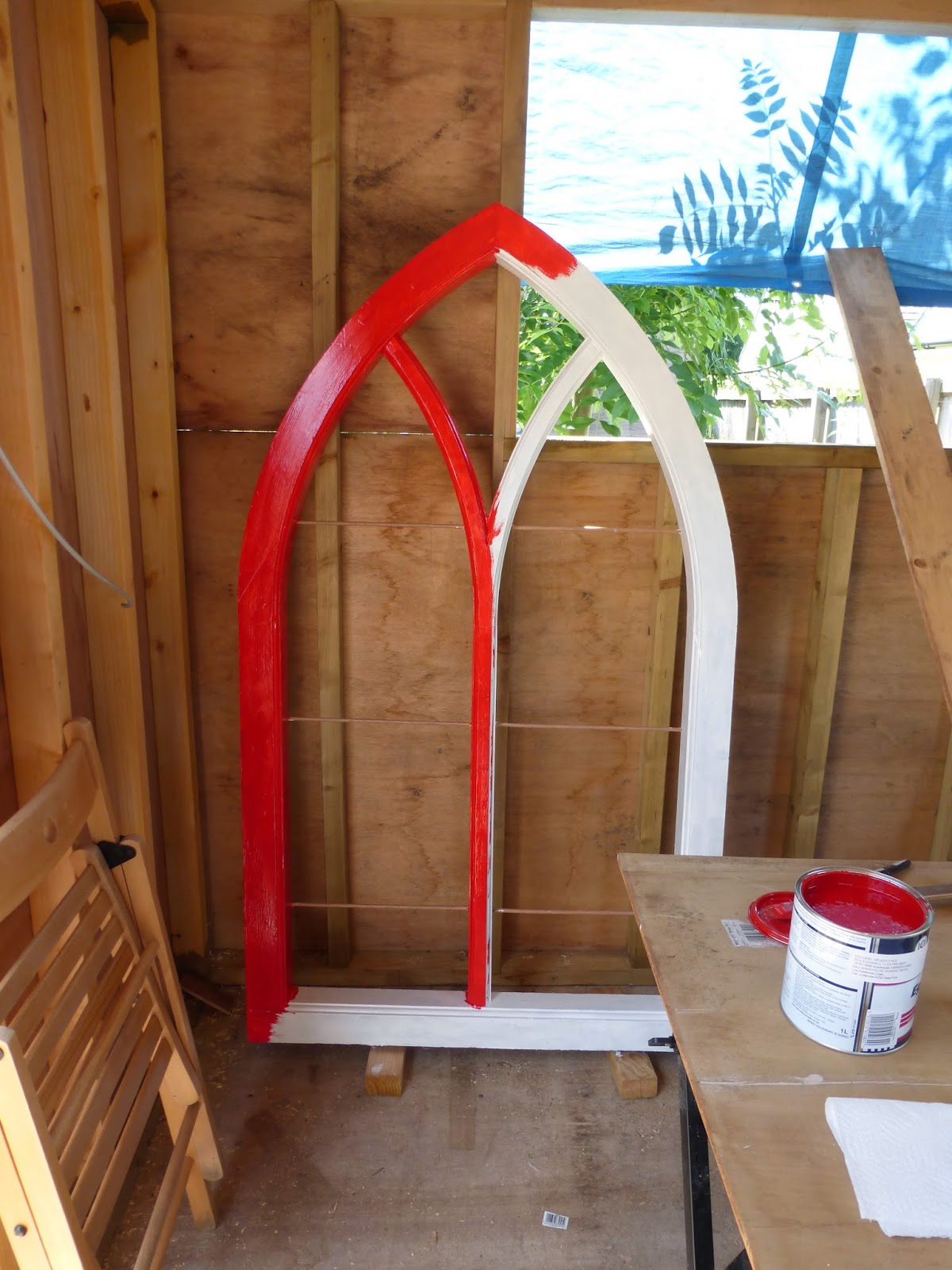 Getting the first row of shingles on had to wait until Saturday.  These overlap the flashing tape that went on last week and the Tyvek house wrap will go over the top of them.  The idea is to push the bottom rows of shingles out slightly, to help the walls shed any rainwater away from the base.  The bottom edge of the Tyvek will be about half an inch lower than this row of shingles, and the two overlapping bottom rows of shingles will 'step down' another half inch or so each, so they will hang over but not touching the concrete base.  That should be enough to protect the base of the walls.  The roof overhang will be about 16in at the front, 6in at the back and 14in at the sides, so that will help too.  It is surrounded by gravel, so rain won't splash up like it would from concrete pavers.  We're not adding guttering, just relying on the gravel to act as a soakaway - the runoff from the roof may as well go straight into the ground rather than a water butt and our trees and shrubs can use it direct. 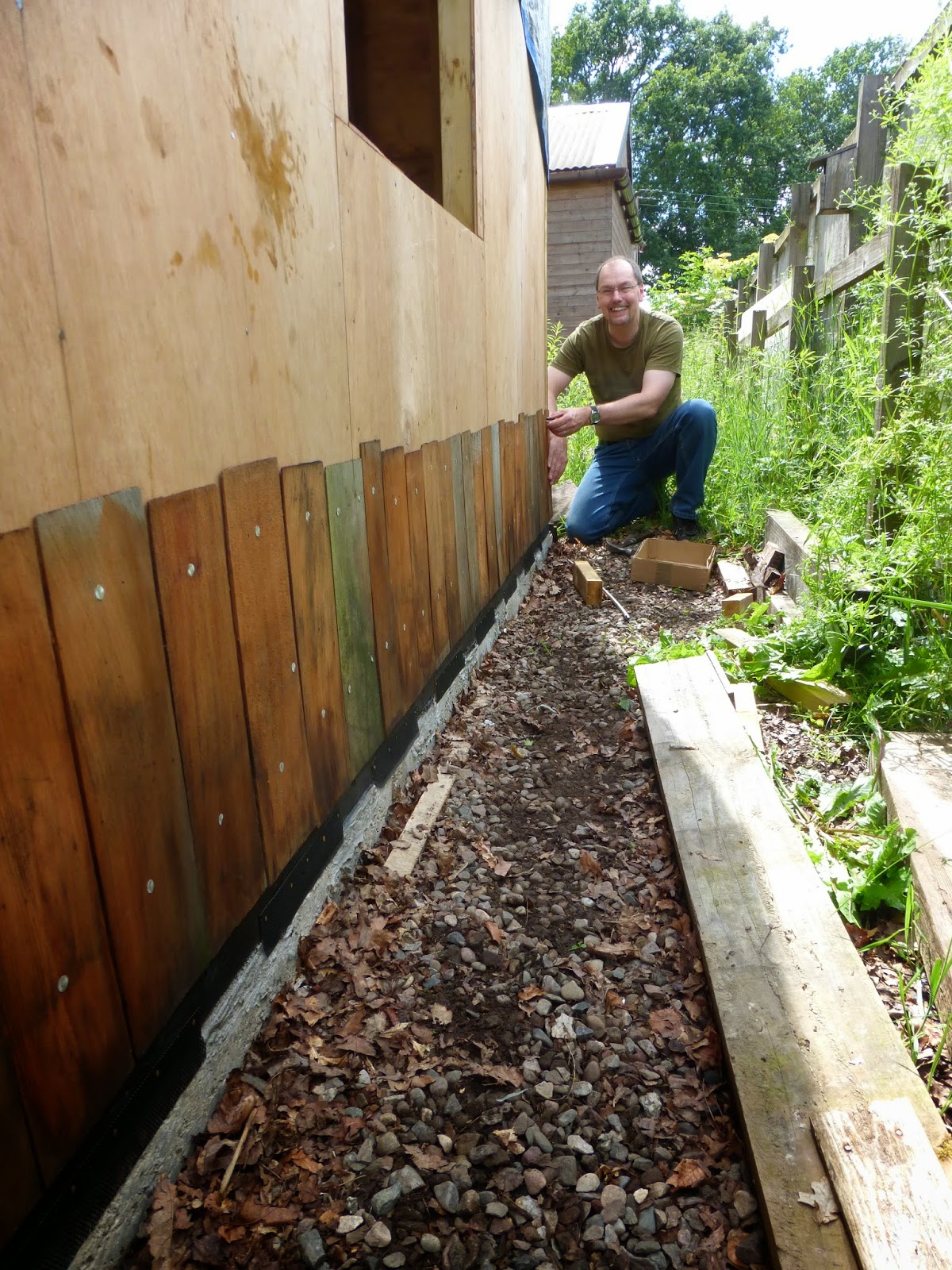 Having the window sill for the back window at about the same height as the workmates has been quite useful as an extra ledge to balance long timbers... 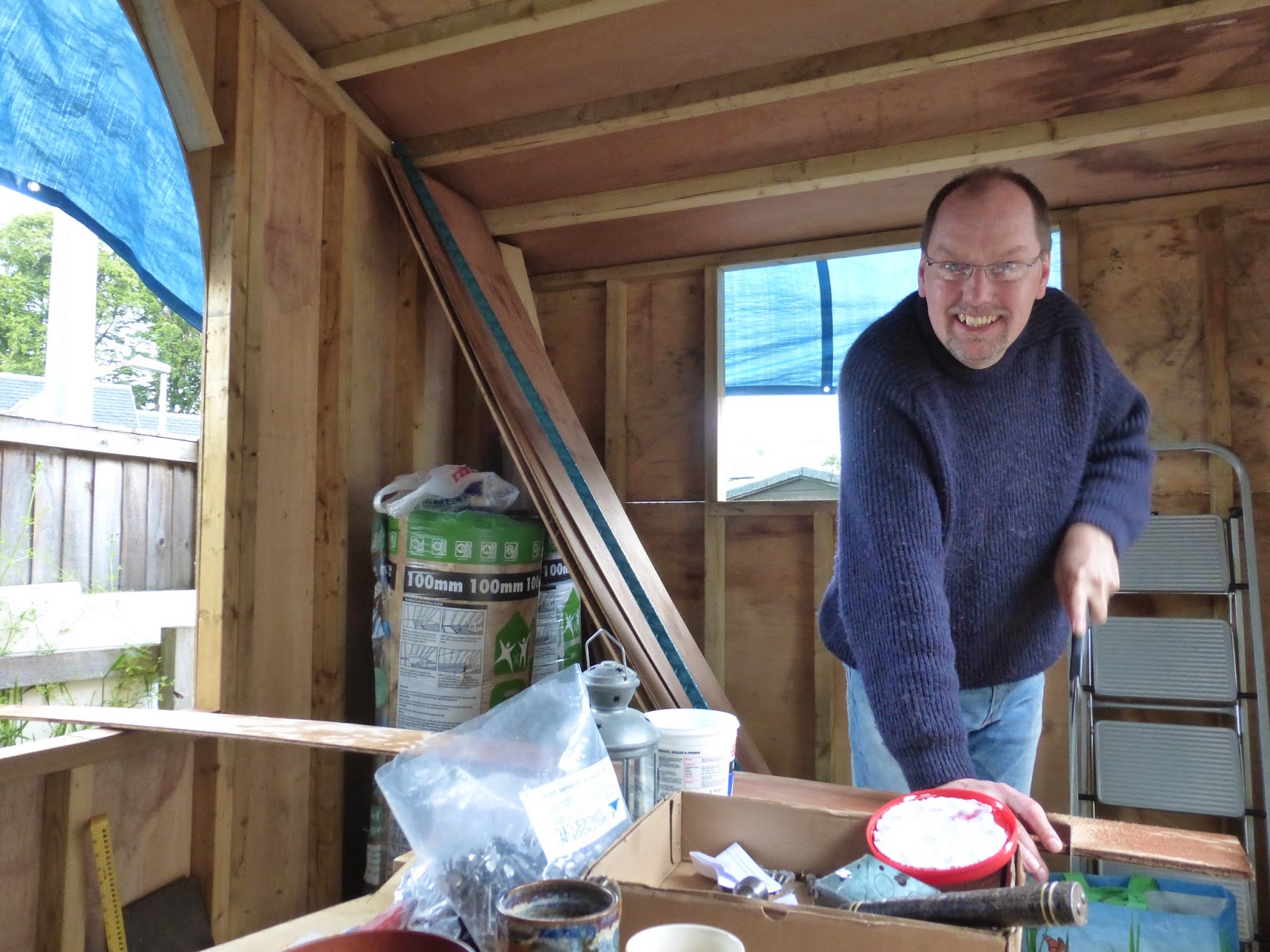 There will be four double sockets around the walls, each one at a reasonable height next to a window, so it can be used as a workroom as well as a storage space.  No crawling around on the floor or trying to get behind furniture to plug things in.  A solid block made from two thicknesses of plywood scrap will give something to screw the electrical boxes into. 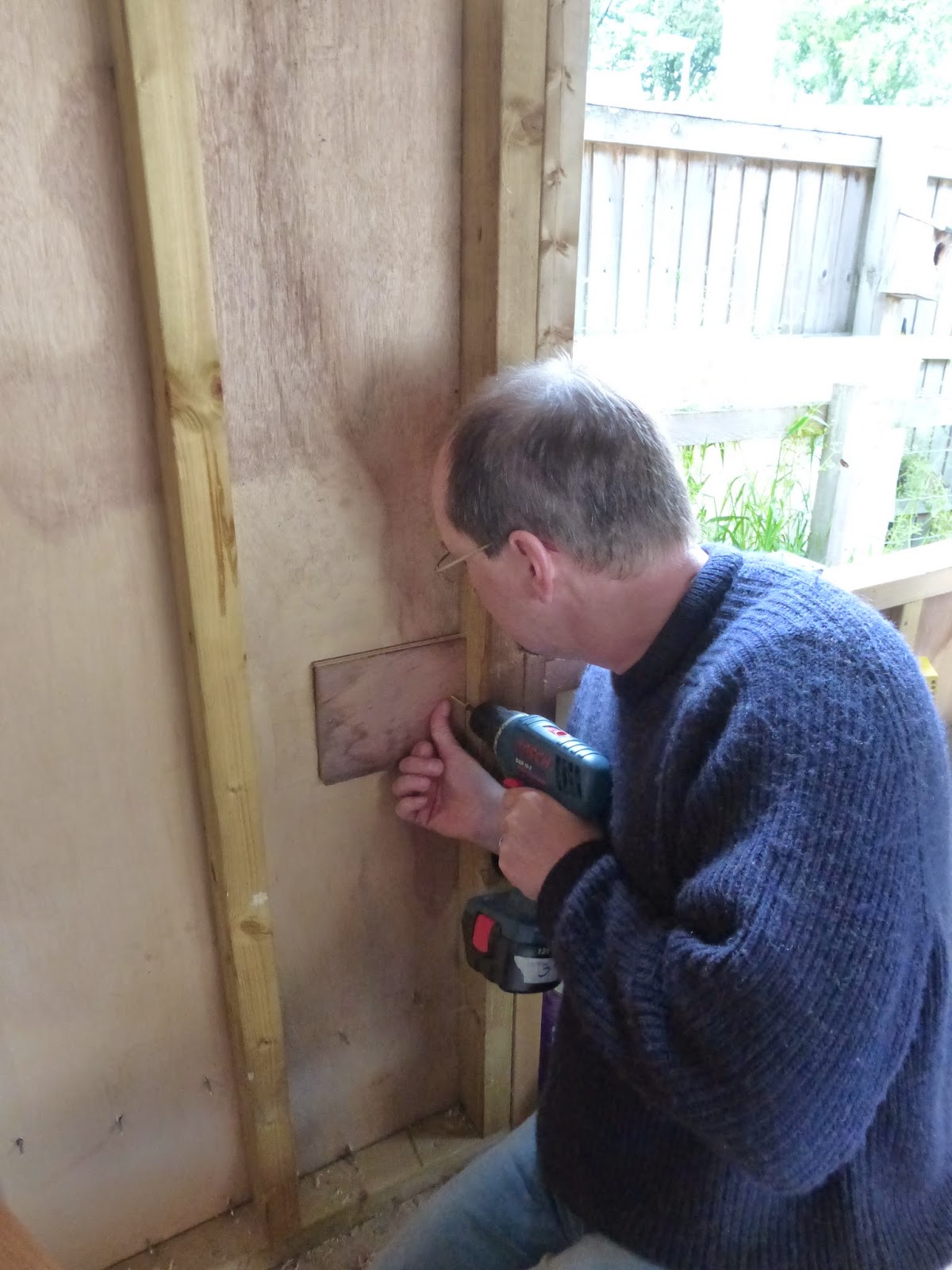 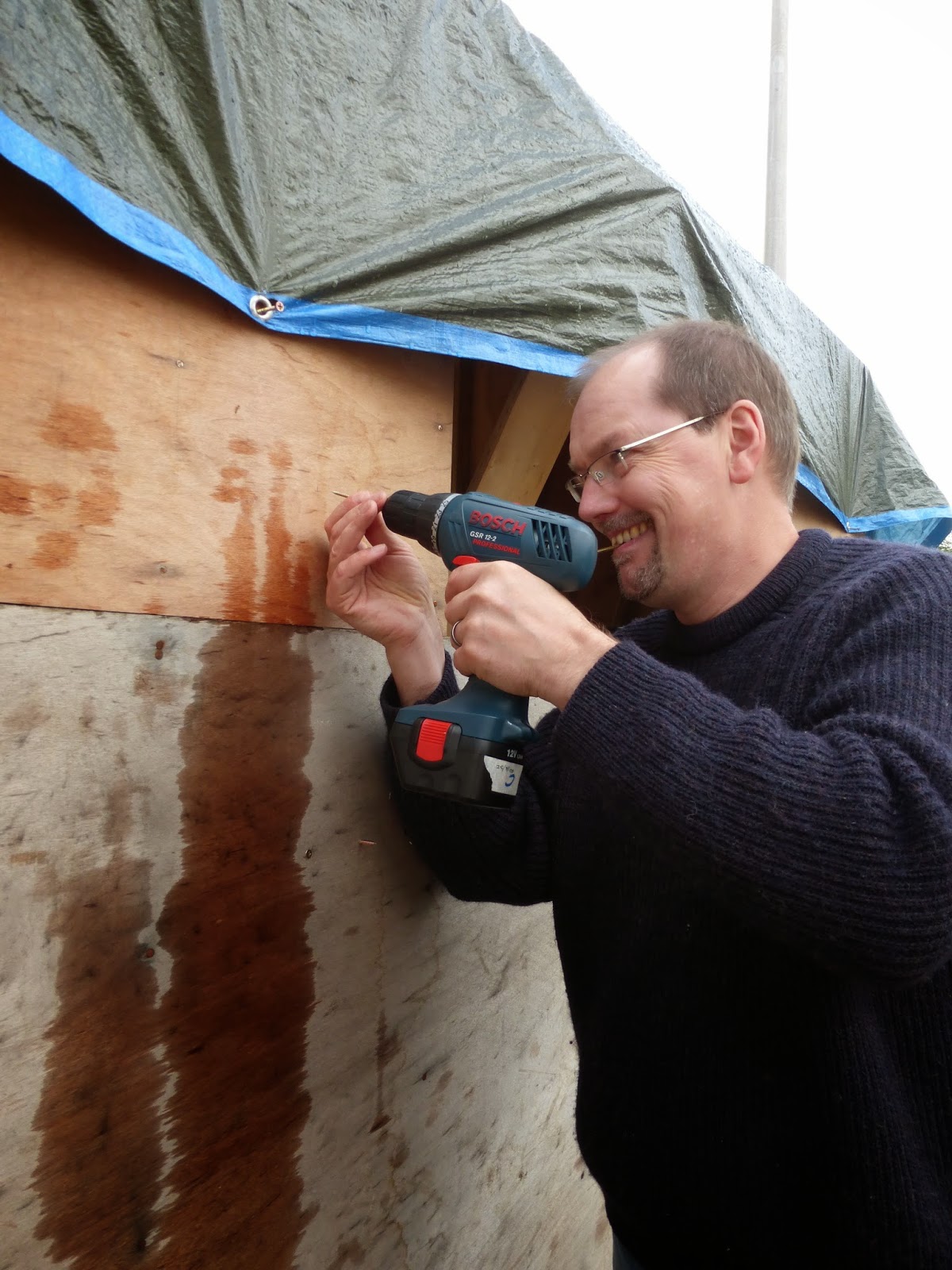 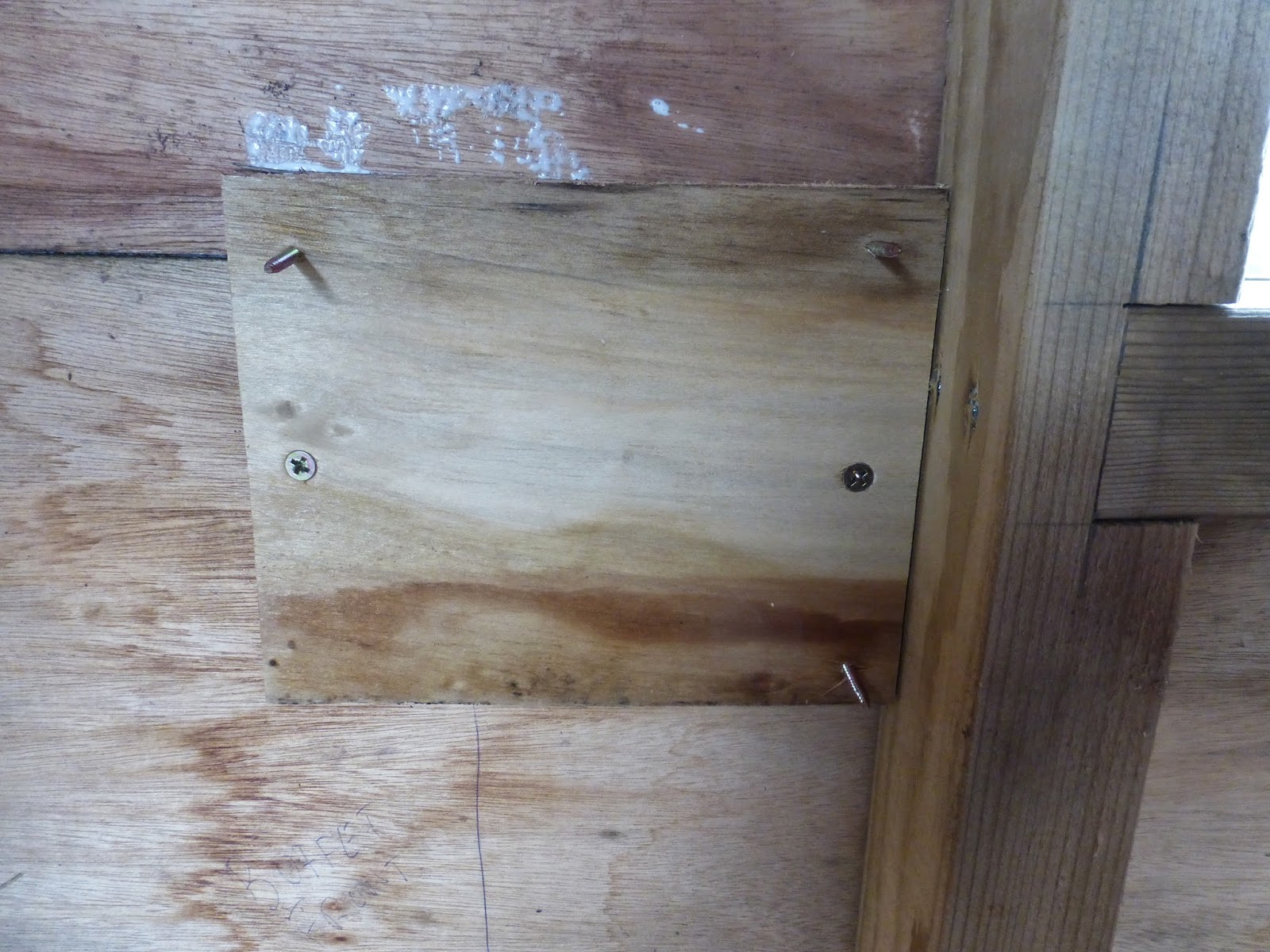 None of the recycled windows are opening windows, so we are building in a vent on either side of the gothic window.  The outer vent panel will have stainless steel anti midge mesh inside of it, plus we'll paint the inside of the vent openings with bitumen paint, to seal them.  The inner vents are sliding ones, so they can be closed in colder weather. 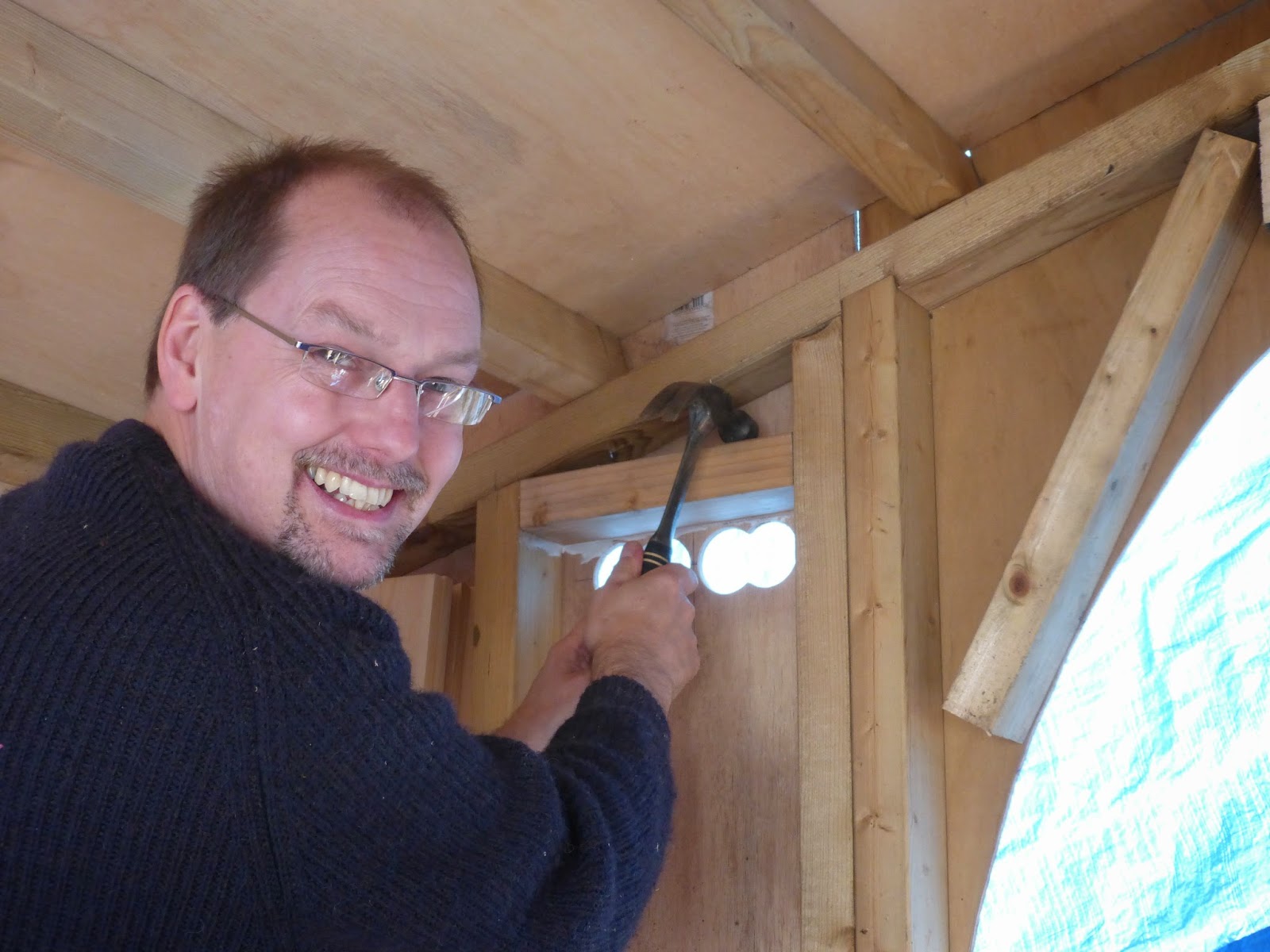 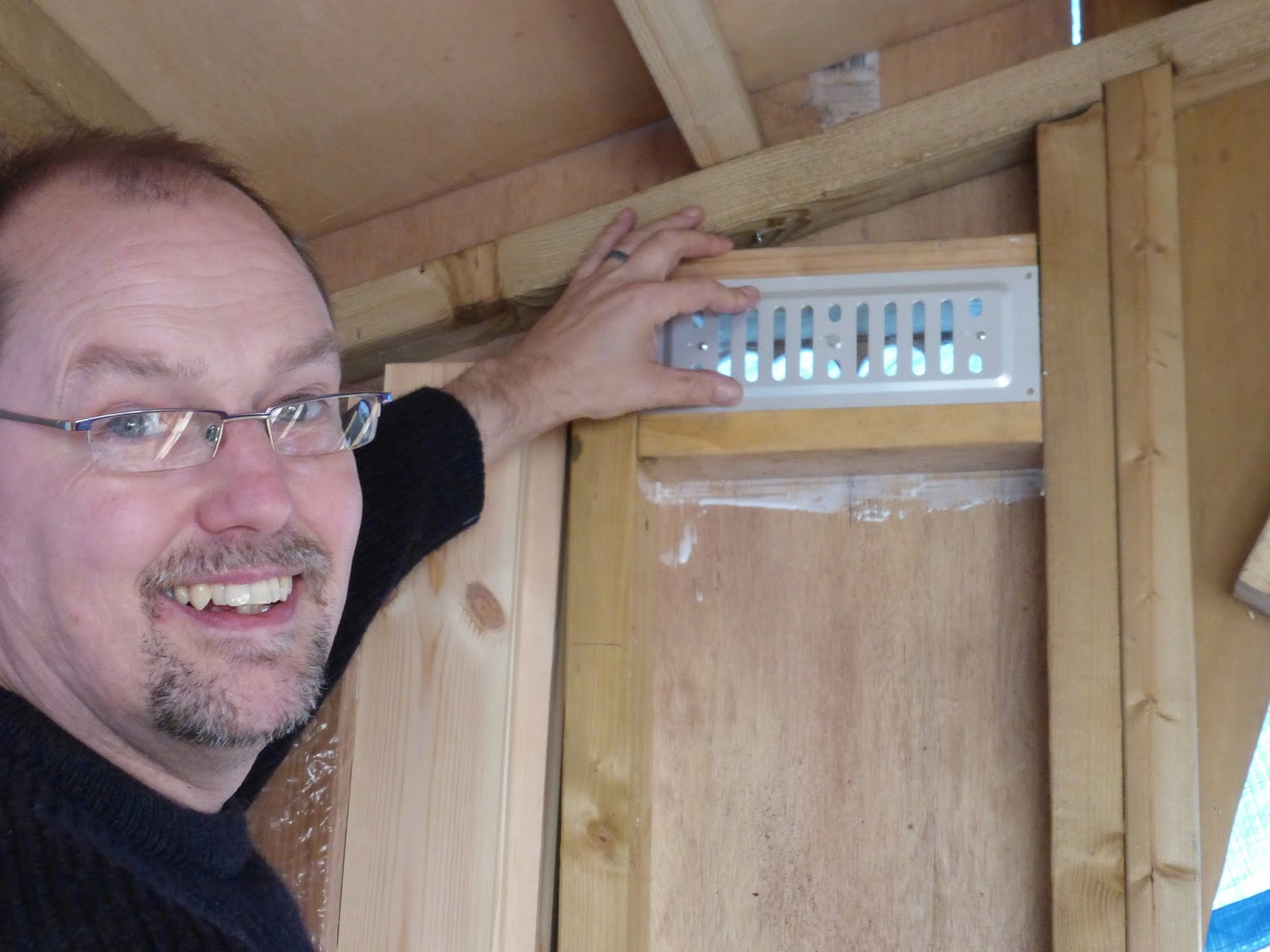 A well earned break.  Lots of cups of tea (plus a couple of beers) were shared this weekend. 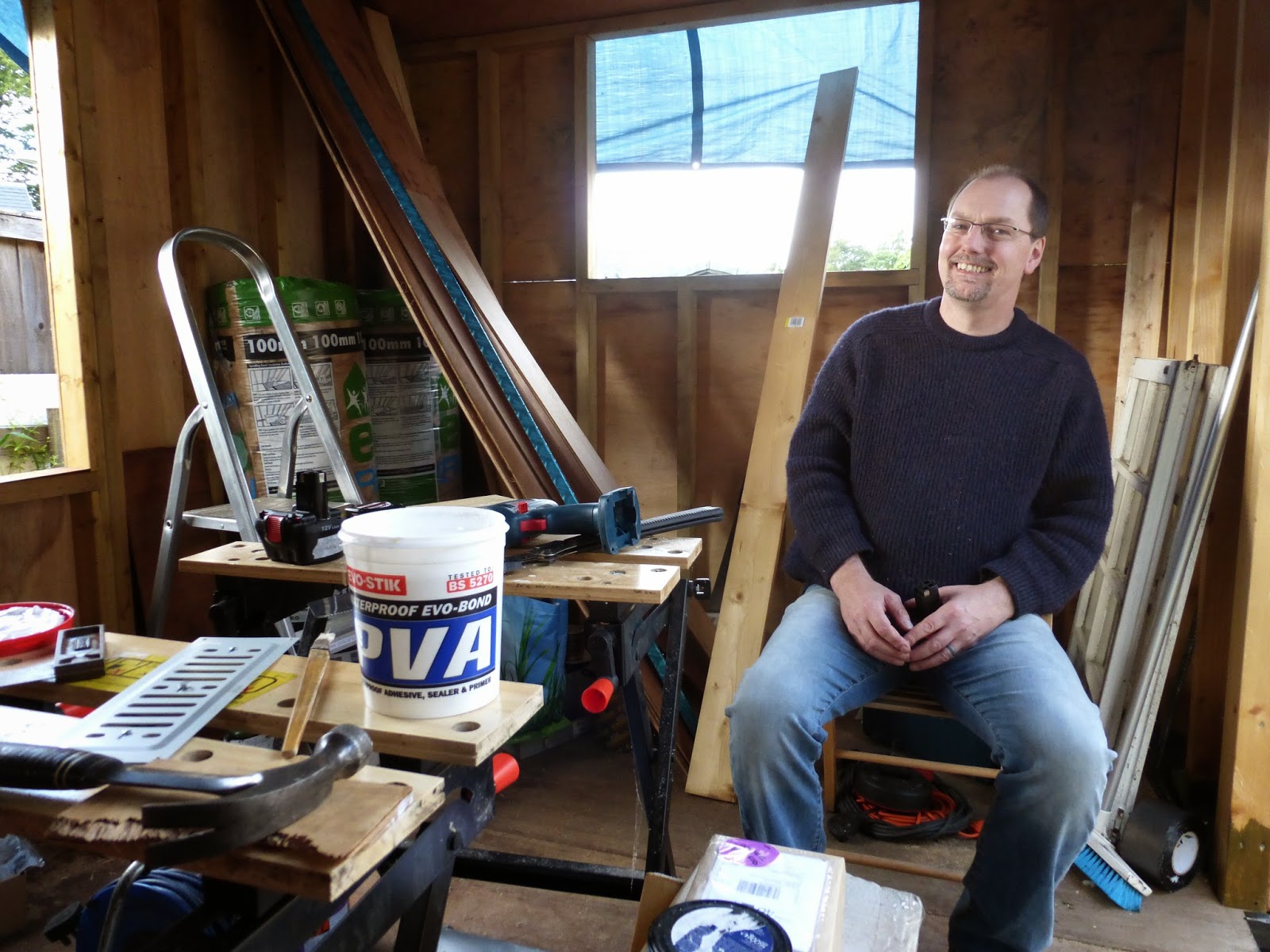 Sealing between the outer panels. 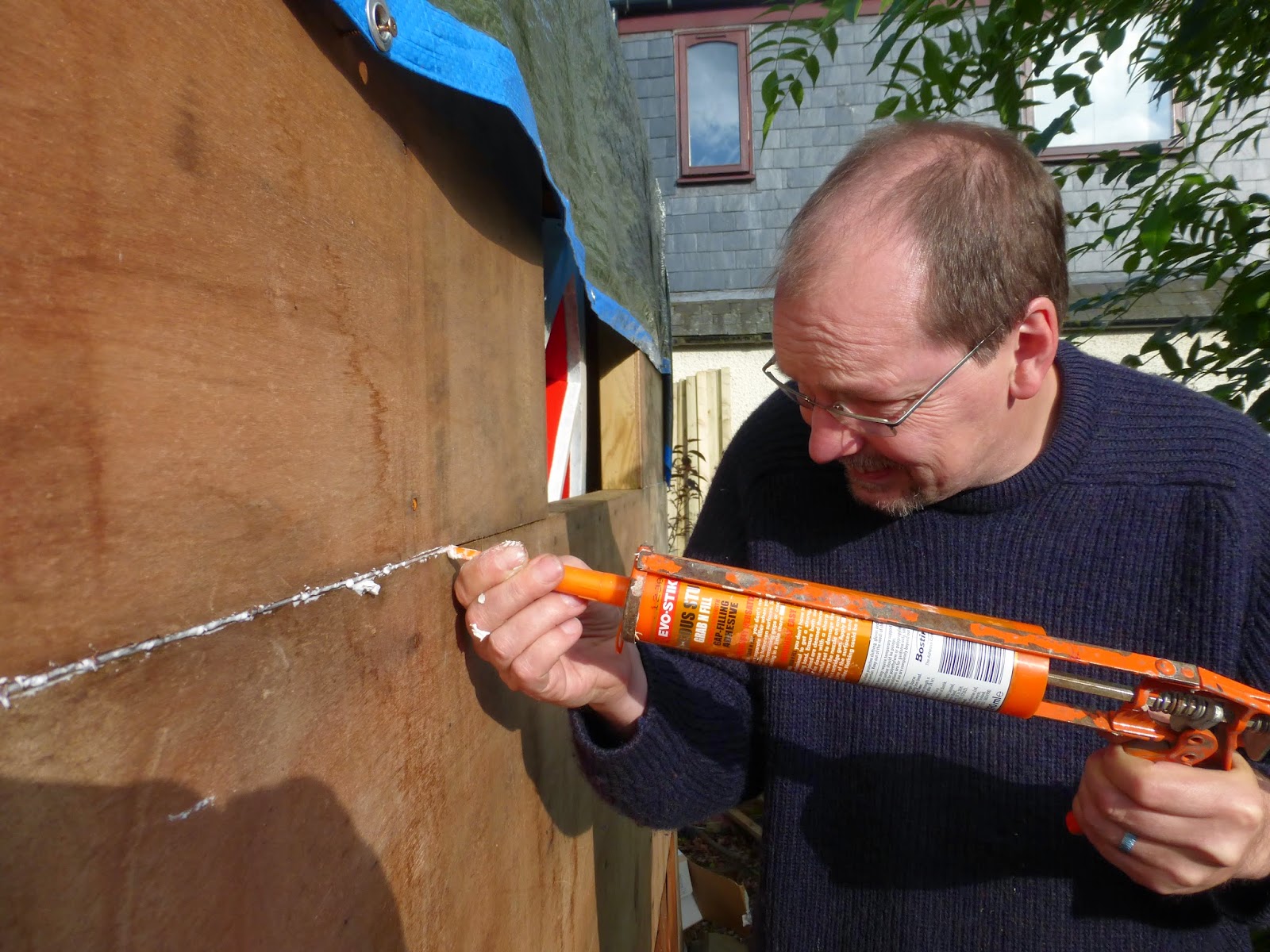 We finished early last night, when the second drill battery was out of power. 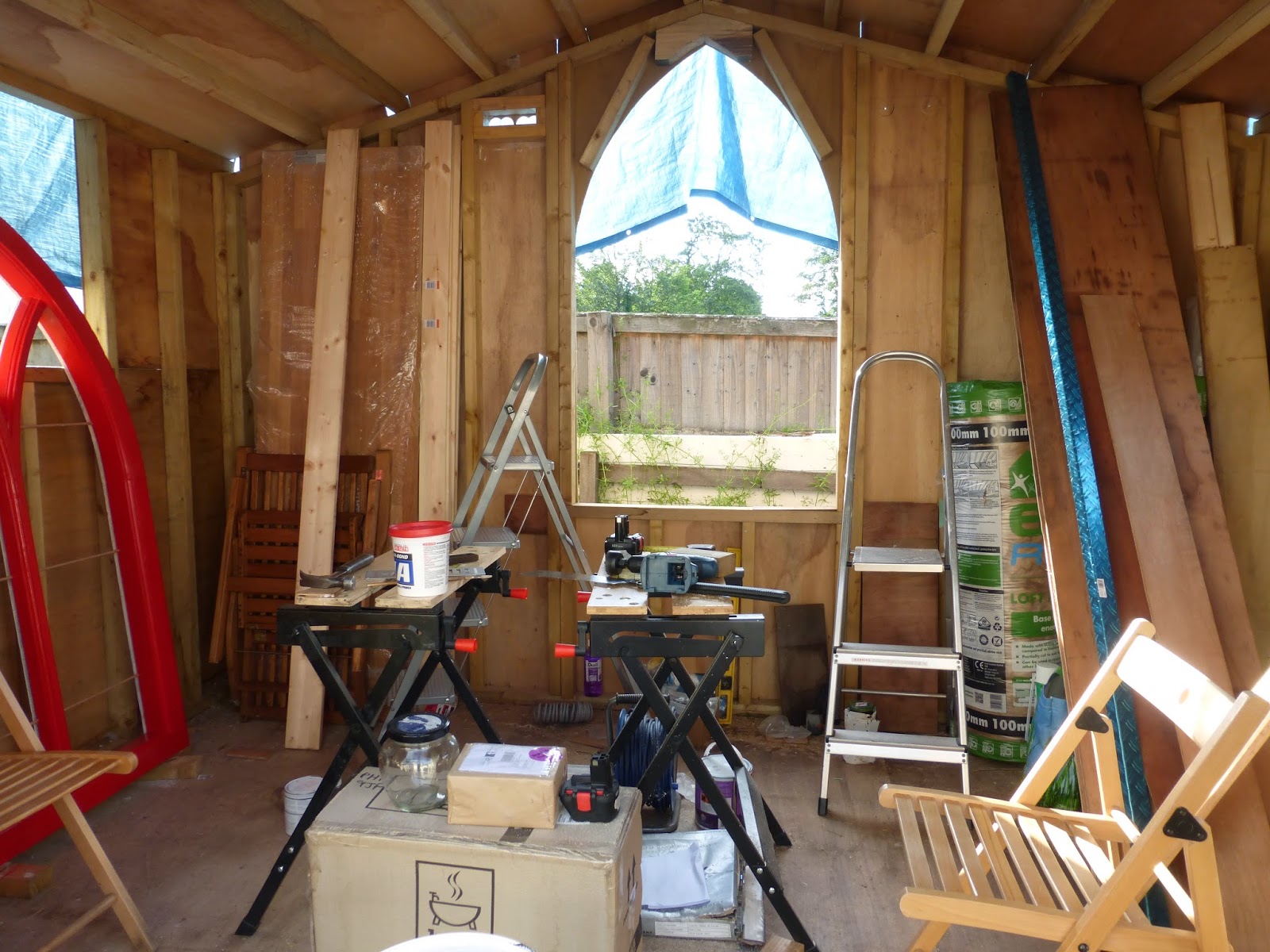 Being so far north, we are getting long evenings and plenty of daylight at this time of year, which helps!  This was the sky at 10.30 on Saturday night. 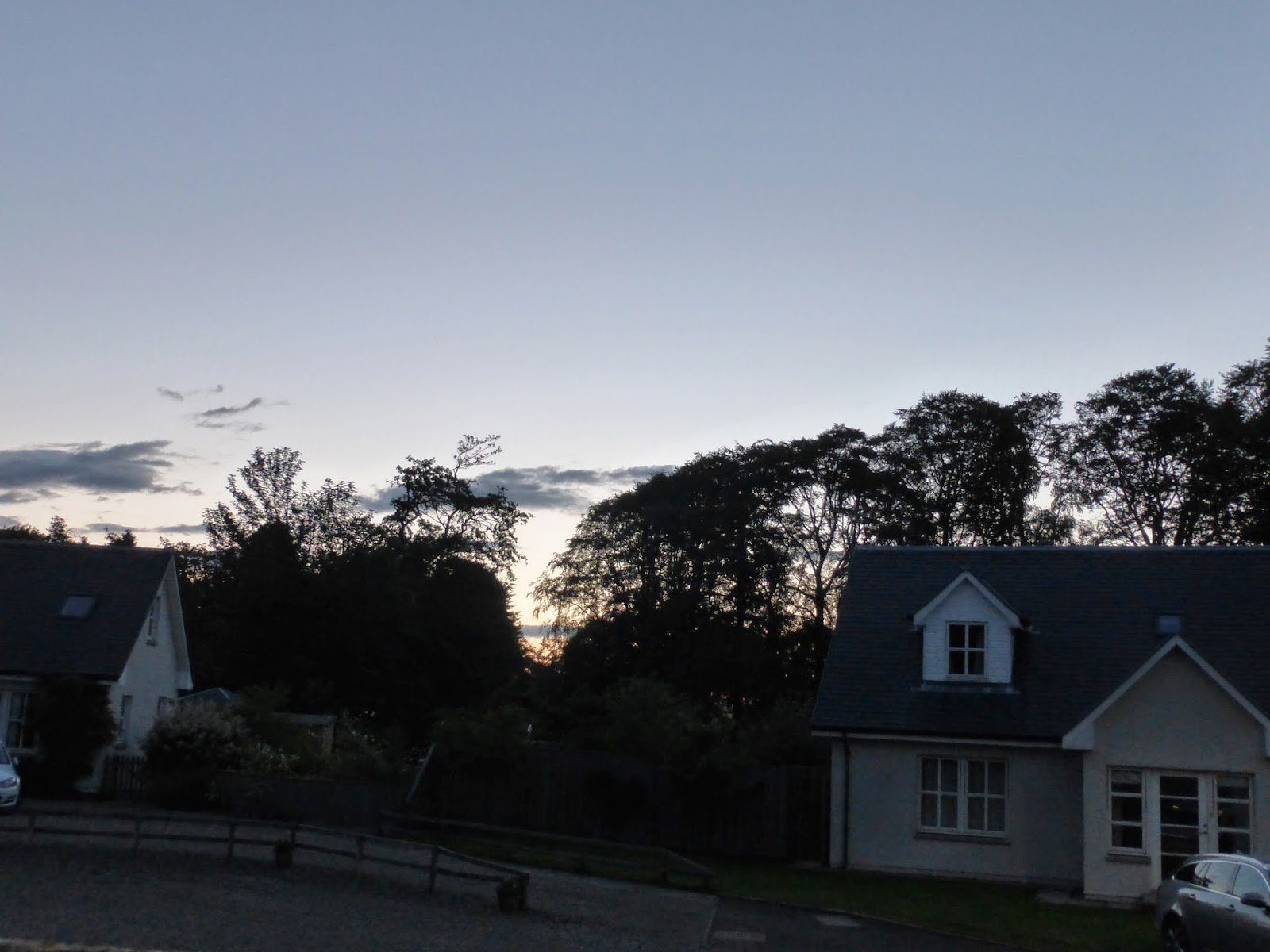