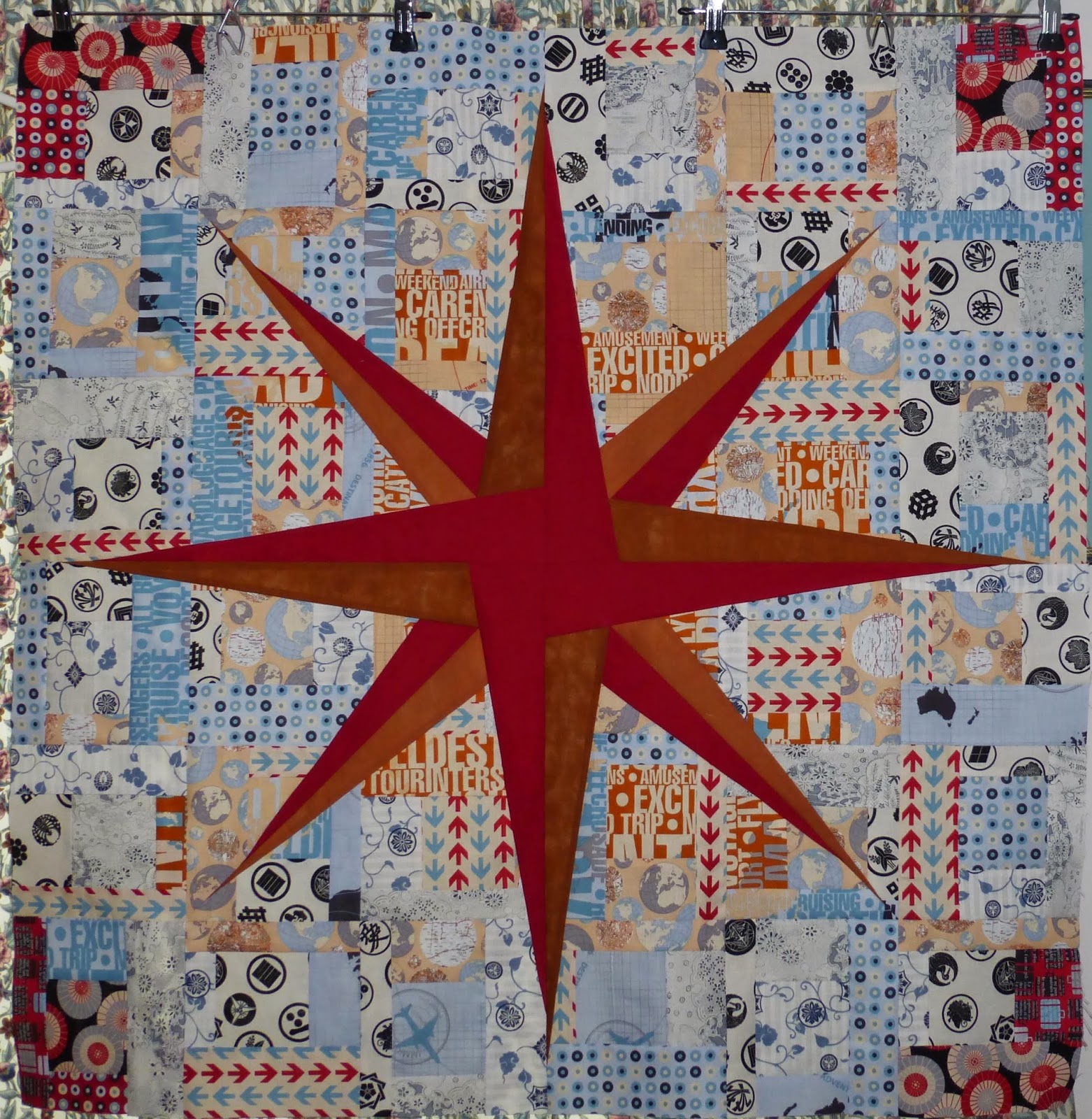 When I saw Bobunny's 'Detour' range for Riley Blake Designs, I loved the travel-themed fabrics, so I wanted to make something using their fat quarter bundle. Another variation on Japanese Circles and Squares seemed the way to go, with eighteen fat quarters to play with.  I added some fabrics with kamon crests, traditional umbrellas and another monochrome Japanese print.  The arrow print has been a lot of fun to use.  I used plain fabrics for the compass star - they just look a bit mottled because I've got the patchwork pinned to the curtains and it is rather bright outside today.

The design uses the same layout and method I used for Masu a couple of years ago and I'm making the blocks starting from the centre once again - the only way to really get the shading right.  Masu used the same large print Kona Bay fabric throughout the centre, but 'Yokoso' (as I'm calling it for short) uses the paler colours from the 'Detour' bundle mixed up.

I cut the fat quarters the same way as we do in the 'Japanese Circles and Squares' workshop and graded the fabrics according to how dark or light they were.  The map prints in particular have a lot of contrast, so pieces with a large 'landmass' (in dark grey) weren't used in the centre - they will go towards the outer edges.  Like Masu, the centre circle area will float on the darker background, but I'm making this one a lot larger, so I'll shade out through the pieces left over from the centre fabrics to the red spots on white (in two sizes) I'm adding towards the outer edges.  It could go as large as 14 x 12 blocks (84 x 72in).  If it does, I might have to think about longarming it, either sending it away for custom quilting or booking a session up at Seattle Quilt Company at Aberdeen.  We had a training day on their Gammill for Glyn's birthday last October - I couldn't write a blog post about it because it was while we were without broadband, so here are some photos now, with Lisa at the shop.  I would want to warm up on something else first! Glyn is a much more intuitive longarm quilter than I am. 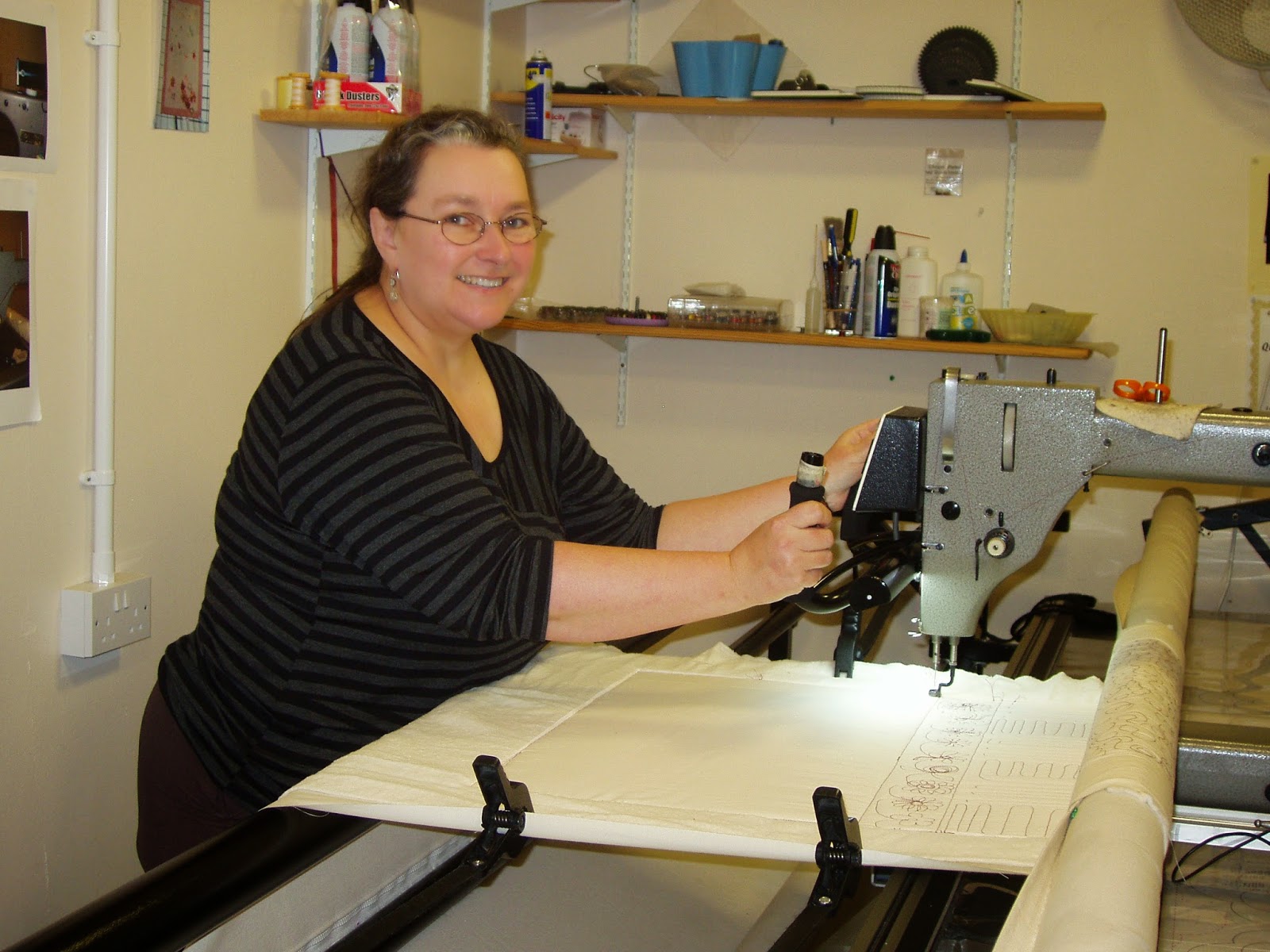 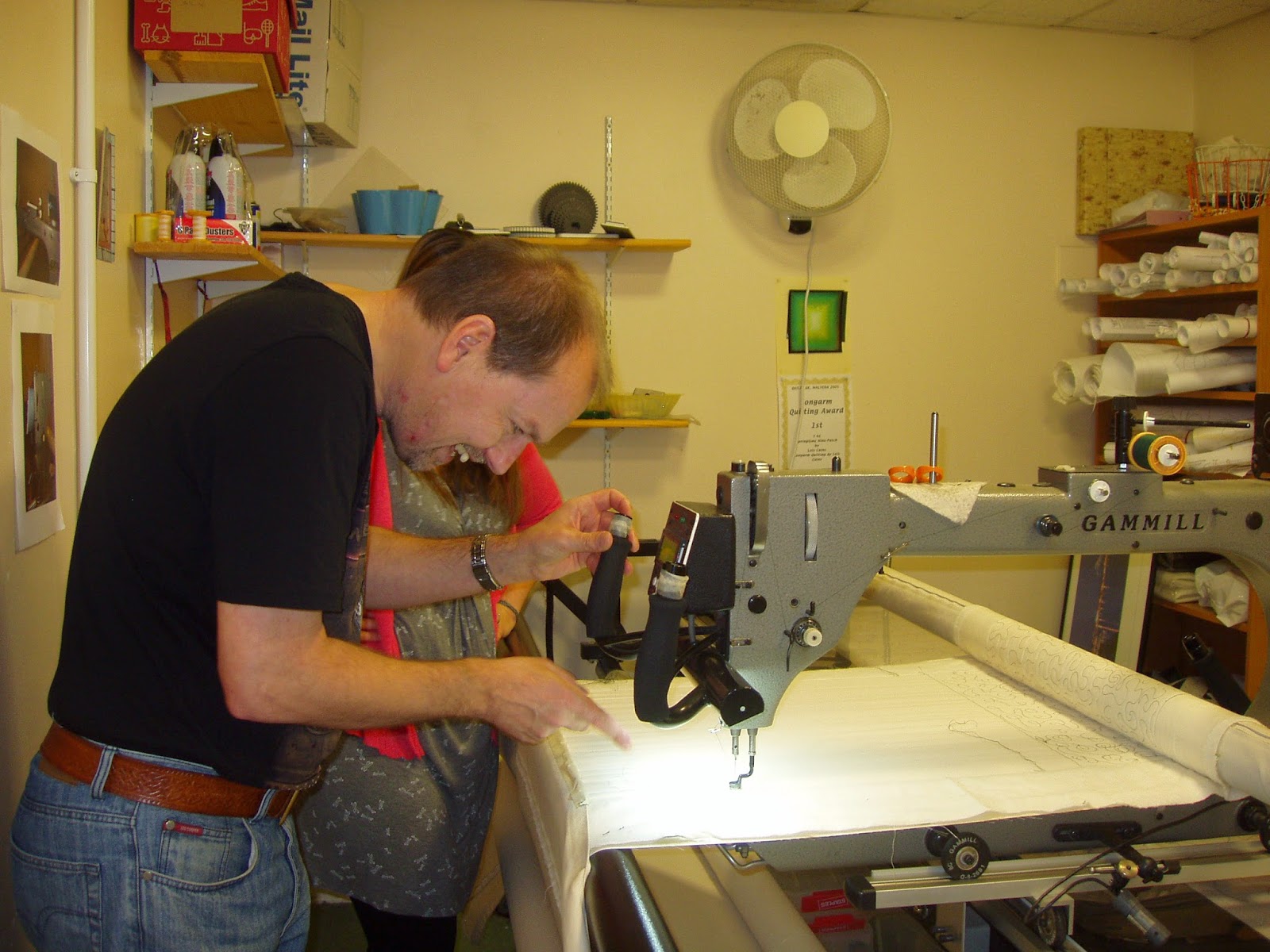 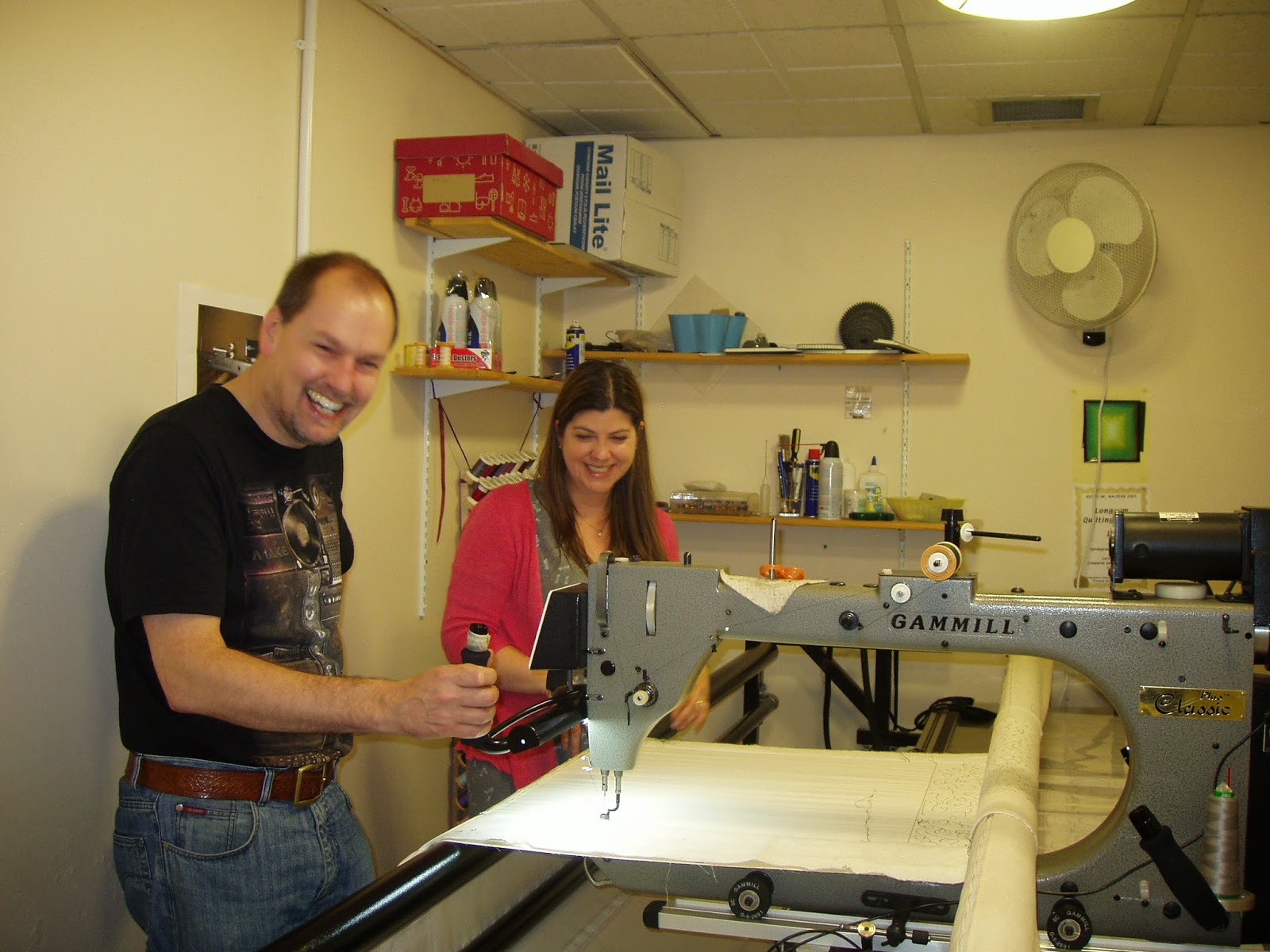 With the travel theme, I thought it would be appropriate to add a Mariners Compass style star to the centre.  So after the first four blocks were sewn together for each quarter of the quilt, I sliced through on the diagonal and added points by stitching, flipping and trimming.  I made the two sides of the point different lengths, with the cherry red segments a bit shorter, to give it a slight sense of movement.  Glyn had suggested I should make it like a propeller, but that would be a bit too tricky for me.  Perhaps I should have just done one half of the point each time to give it more movement - I might try mini versions of that on another piece. 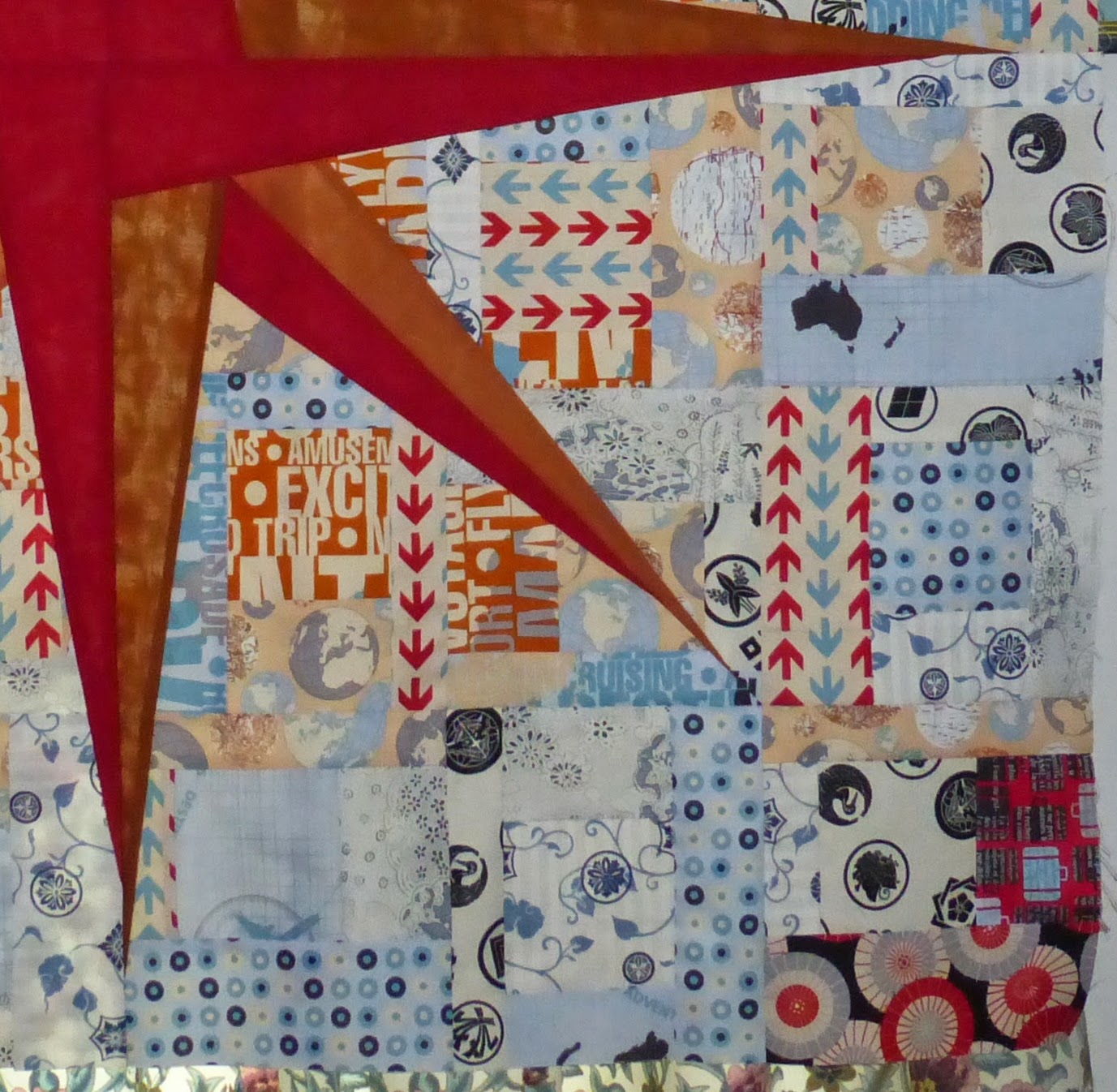 I had not planned for the reduction in block size when I stitched the two pieces back together along the diagonal, where 3/8in was lost into the seam, in exactly the same way as making a triangle square.  The size reduction affects the square underneath the point in each corner and would continue along the rows and columns towards the outside of the patchwork.  After thinking through possible ways to fix this, it seemed the best way would be to have the blocks in the affected rows trimmed down to fit, rather than adding extra fabric to each quarter of the centre.  The affected blocks could be resized by trimming off on the wide sides only.  Rather than 'waste' 3/8in x 61/2in strips from the widest long pieces, I thought it would be a better idea to cut them that bit smaller when cutting the pieces out.  After ending up with rectangular blocks where I didn't want them and finding it is just too easy to mix up a 2 1/2in strip with a 2 1/8in one, I've gone for trimming the finished blocks! So long as 'Japanese Circles and Squares' blocks are trimmed on the wide sides only, it isn't too obvious that a bit has been taken off. A couple of days ago, I seemed to be doing as much unpicking as sewing, but hopefully I've got beyond that now.  I'm blaming the hot weather.  It was 28 degrees C in the shade yesterday afternoon and today is hotter (officially 24C on the weather forecast).  I have finally caved in and switched the fan on!
Posted by Susan Briscoe at 15:19