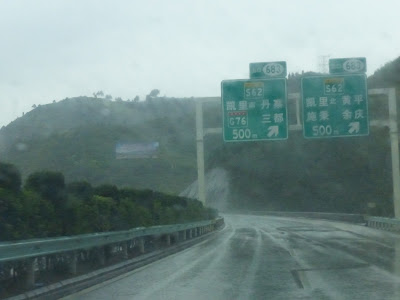 We drove through thunderstorms to get to Pintang city, where I would be teaching the Maonan women's group for four days of patchwork lessons, introducing them to the Singer sewing machines.  Most of the drive was on the motorway, which must be quite recently built. 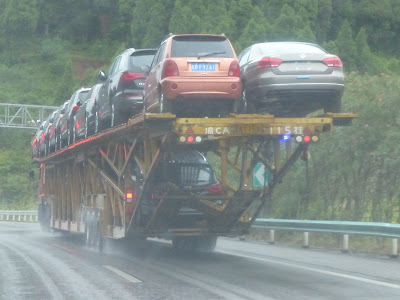 Most of the time we were moving so fast, I couldn't get any photos and it was dark before we turned off onto local roads.  I didn't have much idea about where we would be going, as my Google map search on the address where I would be teaching had turned up a very rural place that looked like it was on a hillside. 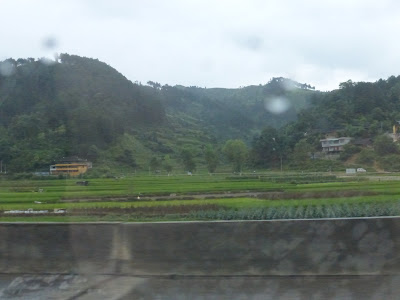 We arrived in the dark and in heavy rain (the thunder and lightning was spectacular), having driven through floods that were rather like what we get in the UK.  Staff from the hotel where we were staying met us with umbrellas and we had to cross a suspension bridge on foot to get to the hotel.  The photo below shows the bridge in the morning, when the river looked really muddy from the heavy rain the night before. 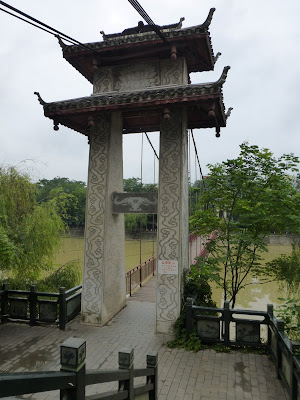 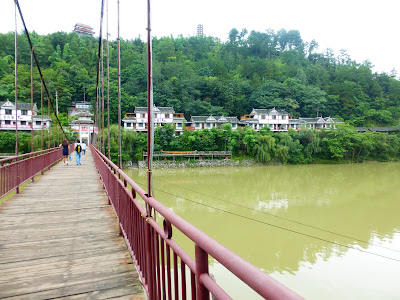 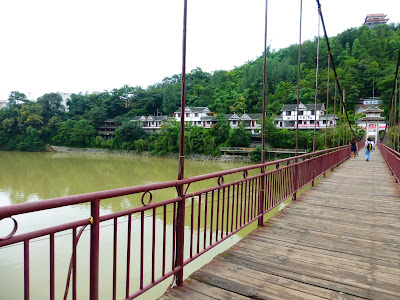 Clamshell tiles on the wall in reception -  Pintang county is a big ceramics producer, especially tiles.  Although I didn't see any tile factories while I was there, the city had a lot of tile shops (photos of those will be coming in another post). 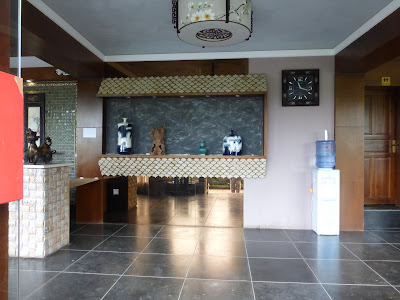 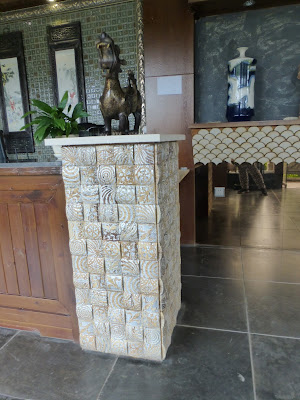 The big goldfish bowl in the reception seating area made it feel cooler. 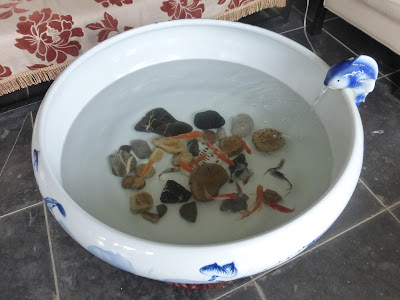 The stairwell on the way up to my room, with pottery birds sitting on branches on the wall. 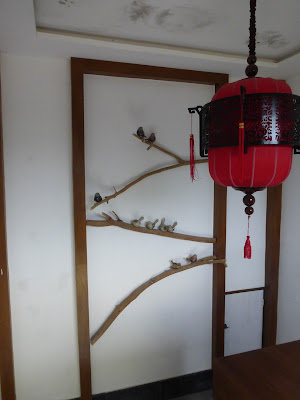 My room was absolutely gorgeous, decorated in a rustic antique Chinese style, with stunning carved furniture. 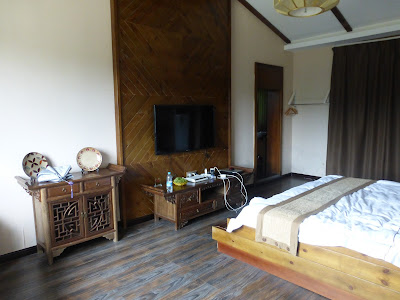 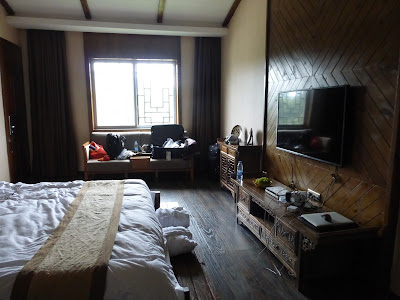 The bathroom - the space with the sink led out onto a rooftop seating area.  The sink bowl was decorated with painted goldfish. 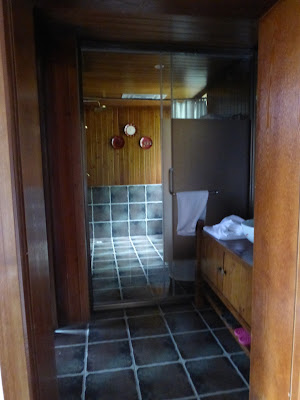 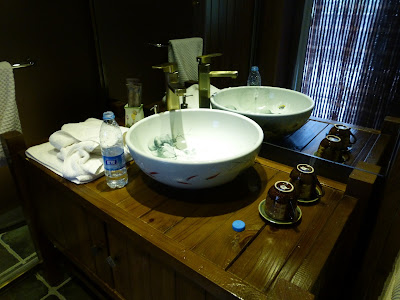 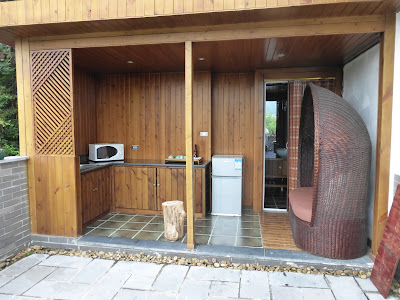 The view over Pintang city, to the mountains. 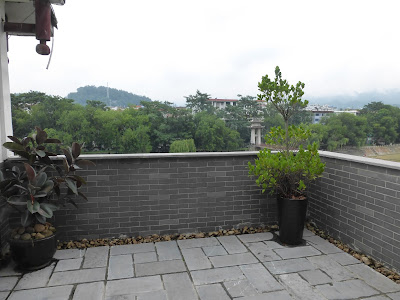 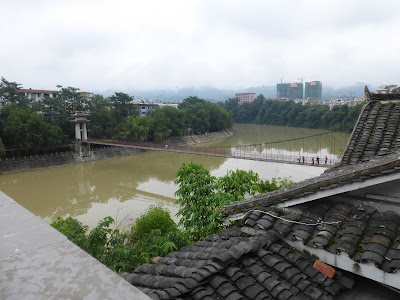 Car parking was on the other side of the river, next to a park where there were lots of snack vendors. 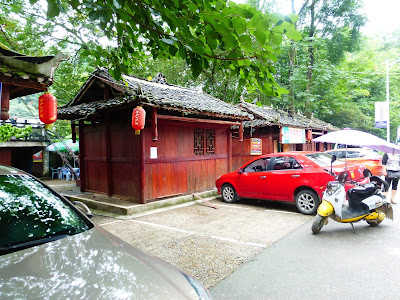 This is the technical college where we would be having the patchwork classes.  This part of the college was the classrooms.  A brand new accommodation block was next door, and some of the students would be staying there. 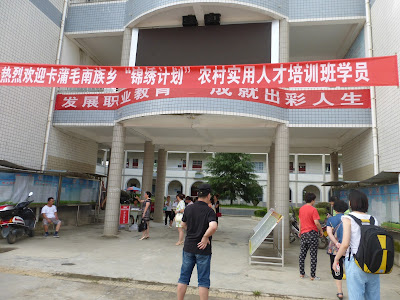 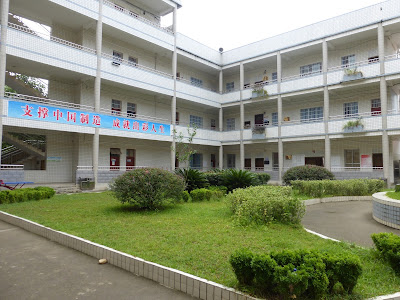 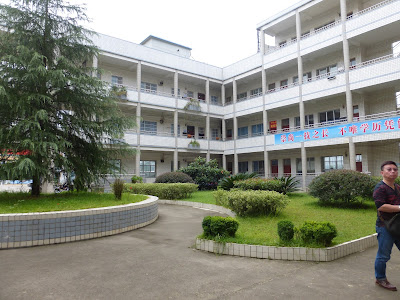 Our classroom was a lecture theatre, with the desks tiered, but enough space on the desks for the sewing machines, which we were loaned by Singer. 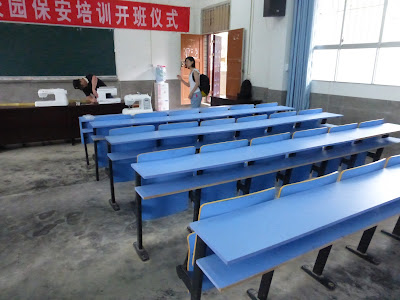 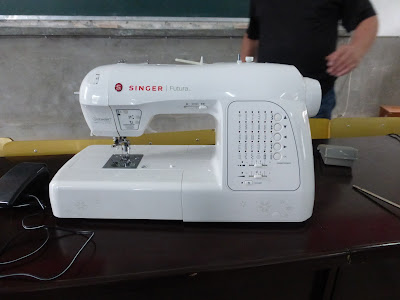 We had a couple of machines with a lot of embroidery stitches, but most of the machines were two different Singer 'Curvy' models.  Daniel Wu and Mr Zhou from Singer set up the machines in the afternoon. 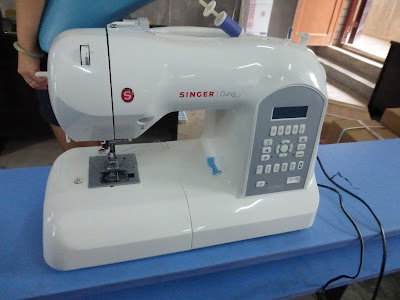 In the admin office at the college - from the right: Angel, ? (sorry, I forgot her name), Mrs Luo (council leader of Pintang County) and Angel's mum, who came down from Guiyang city for a couple of days. 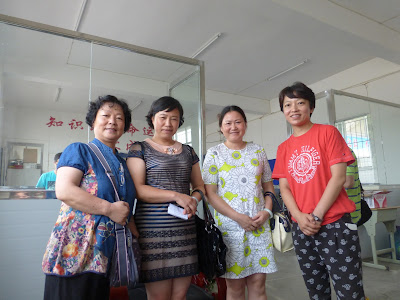 The college had put on a banquet for all the people involved, in a room next to the college canteen.  The soup was pumpkin soup and there were lots of spicy dishes that are typical for this area. 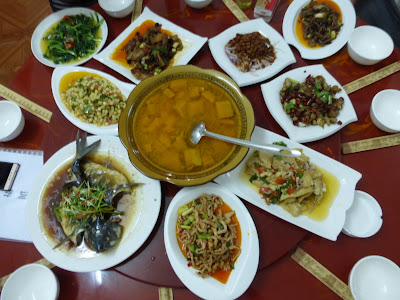 Early the next morning, the sunrise was beautiful and the river had changed colour to a deep green. 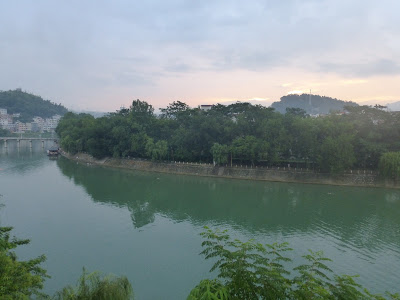