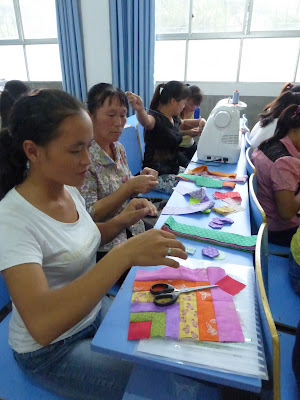 In the afternoon, I introduced the class to English paper pieced hexagons.  Although the main focus of the classes was machine sewing, I knew we wouldn't have one machine per quilter (even before I knew we would have 67 students!) so I wanted to have something up my sleeve that involved hand sewing while they waited turns on the machines. My friend Maureen Poole sent me a big bag of 1in hexagon papers.  She die cuts these by machine (Sissix Big Shot?) and sells them to raise funds for the Quilters' Guild of the British Isles. 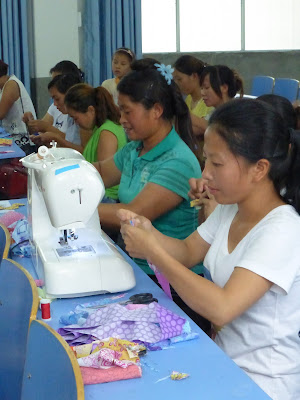 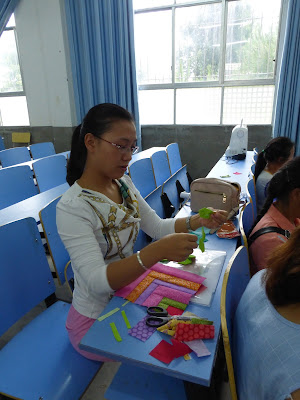 Soon, we had lots of hexagon flowers in progress. At this stage, I hadn't decided what we would make with them, but Angel came up with a good idea on our last day. 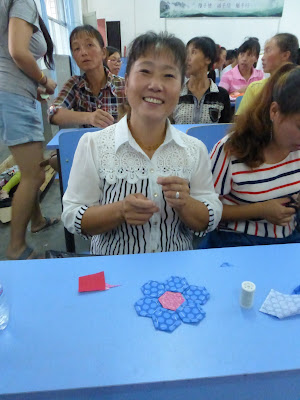 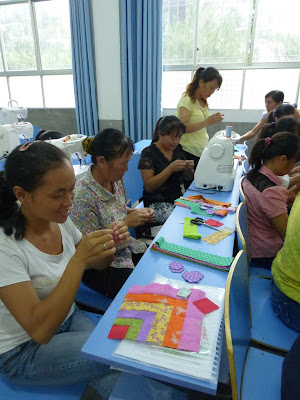 Alternating between sewing their hexie flowers and making more Corner in the Cabin blocks, we had a very productive day. 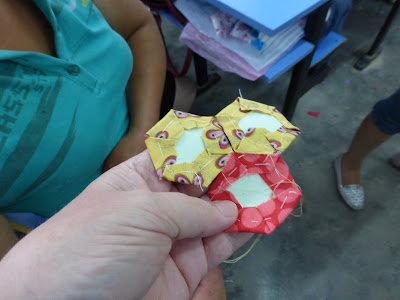 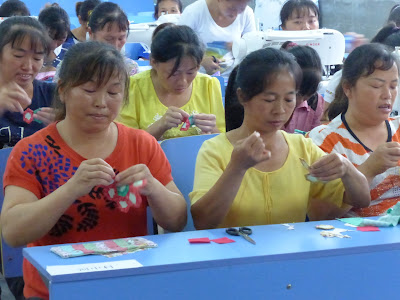 In the evening, we went with Mrs Luo (Pintang County leader) to view a spectacular waterfall at a famous scenic spot.  I managed to take a few photos on the way.  It was raining as we drove through the most stunningly beautiful mountains and valleys, past many small villages. 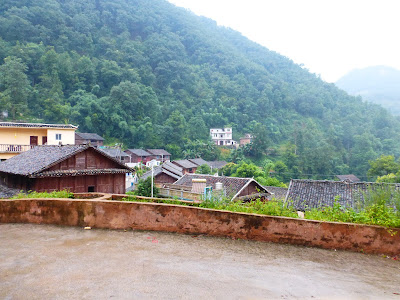 I love the shape of the mountains here.  Some are perfect equilateral peaks.  I wish we could have kept stopping to take photos. 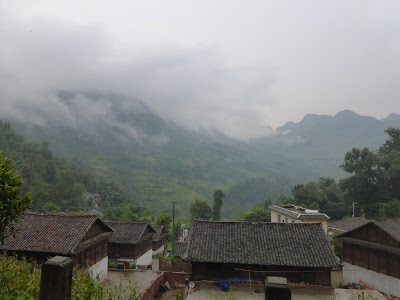 We were on our way to Jia Cha waterfalls.  This is the entrance to the site.  I guess it is so popular, the number of cars must be controlled, as there is only so much parking. 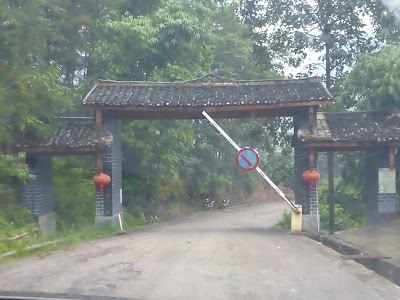 Although it was early evening, there were still a lot of people there. 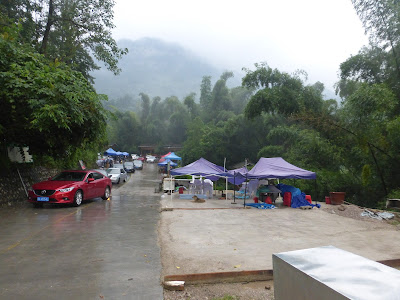 There were several pavilions like this one, placed where there was a particularly fine view. 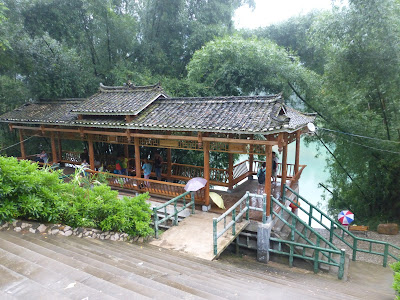 The construction style was like the pavilions around the village meeting areas that we had already seen several times.  I love the detail in the trellis designs.  This one was like my 'Irori' block design. 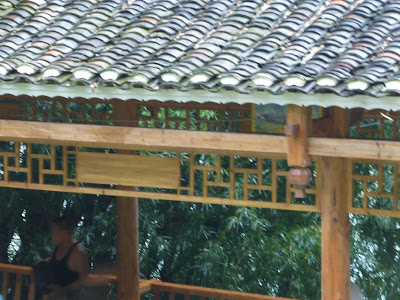 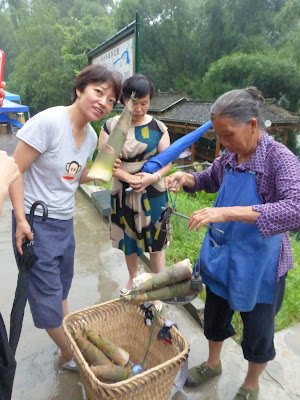 It looked like there had been a lot more stalls there earlier in the day. 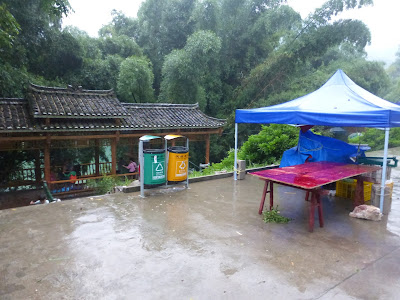 This was the path to the waterfall.  It doesn't get much better than this.  There are rice terraces on the left, all contoured around the hillside.  Bamboo leans over the path. 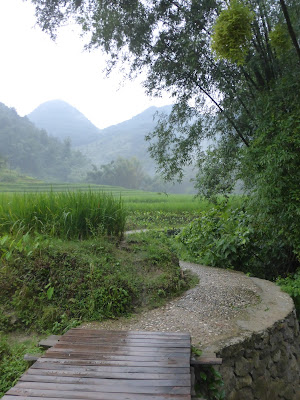 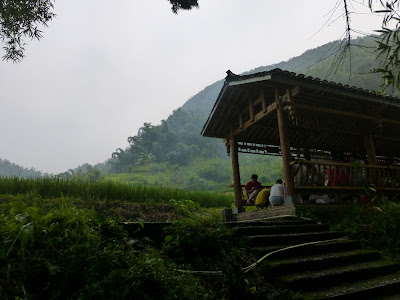 There were stepping stones, but the water was pretty fast.  Miss Gao, Angel's company designer, was more adventurous than us, going right out into the middle of the stream to take photos (she's wearing the red top). 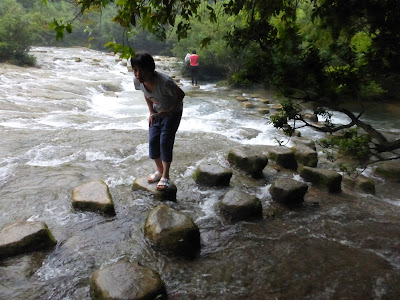 Mrs Lao by the waterfall, wearing yet another stunning designer dress. 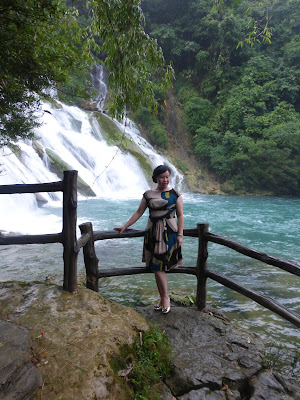 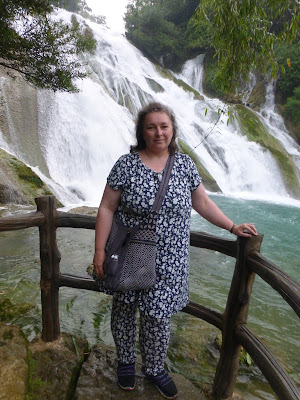 The trees bending over the rapids looked like something from a classical painting. 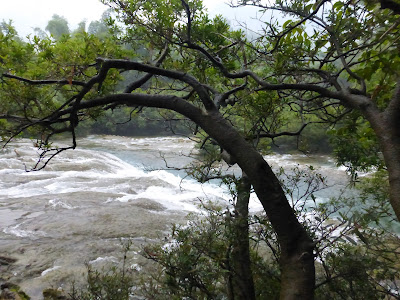 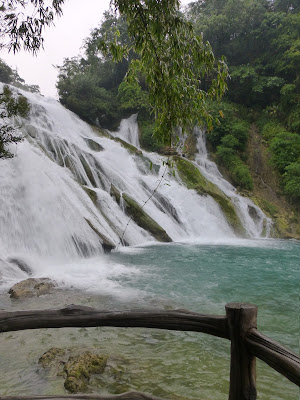 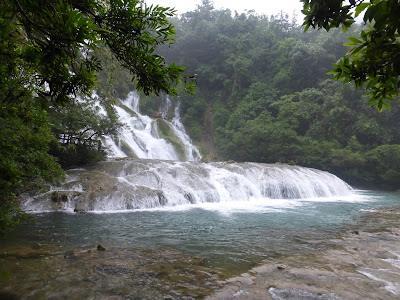 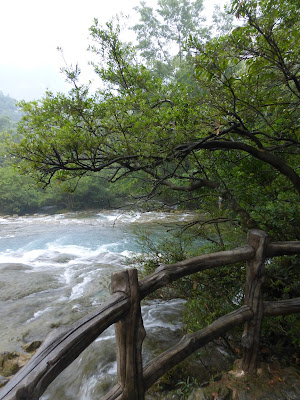 On our way back, people had put tents up under the pavilion roofs, which was a good idea, given the heavy rain. 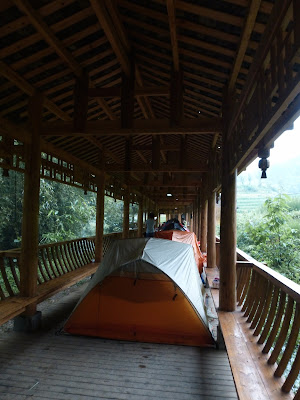 A map of the waterfall system. 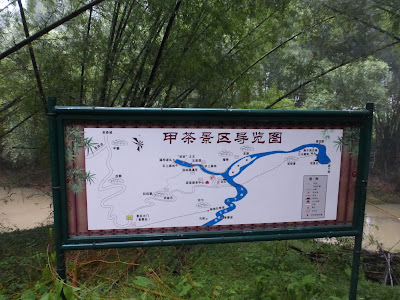 When we got back to our hotel, Carma Elliot (Director of the British Council in Beijing), Jack Yu (First secretary of Culture and Education at the British Embassy in Beijing) and Jack Xiong (from the British Embassy's south west offices in Chongqing) had arrived.  They were coming to see our project the next day, so we had dinner with them at the hotel.  It felt like a long day, as we had done so much, both in class and out of it.
Posted by Susan Briscoe at 10:21