The dolls house I sold on eBay about a month ago went off to its new owner about a fortnight ago in a rather big box, and she sent me some photos of it yesterday.  This is how it looked before it left me - completely unrestored, although I had given it a gentle clean (apart from the battery box on the back, which I didn't know how to get into!) 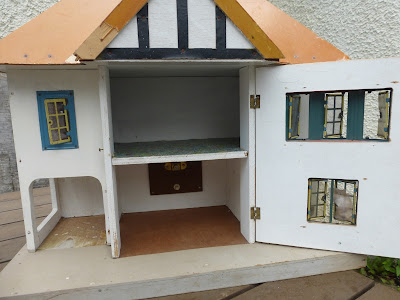 I rescued the house from a charity shop in Wrexham during one of my lunch breaks when I worked for the council.  This is what I wrote about it on eBay - it had seen better days, but luckily no one had covered it in sticky backed plastic (like the first dolls house I started restoring!) or overpainted the 'flowers' on the front.

This pretty little house has been on my restoration list for nearly 20 years and I'm just not going to get it done, plus I need the shelf space for my other dolls houses.  While is is similar to some Triang and Gee Bee houses, please note that it is not by either of these makers.  The maker is unknown, but dolls house collectors call this type of house a 'Dolly Mixture' - they were UK made by some manufacturer, but we don't know who.

The paintwork all seems to be original, and the 'flowers' up the front haven't been retouched. A few windows have lost their latches (see photos). The roof ends have come loose and at some point someone has attempted to tape them back on, leading to some roof damage, but it would be a straightforward repair, as the wooden guides inside the roof have just come loose and could be reglued. One room upstairs, with flooring in a very pretty dolls house paper which looks c 1940s. The back wall has a rather basic electric light, with a switch inside the house and a battery box on the back - I don't know if this works and the battery box would need a good clean out and probably adapting to take a modern battery system. Other than the roof, restoration could be mostly a touching up job where the nail heads are visible, if you don't like your houses looking too freshly painted.  The damage to half the front barge board (partly broken off) could be rebuilt with modelling paste and painted, or a new strip of wood attached.

I wondered if the use of cardboard for the roof and the rather odd assortment of hardboard and other woods might point to this being immediately post war? It is known that UK toy manufacturers had their supplies of wood limited immediately after the war. If anyone knows more about this house, do let me know. 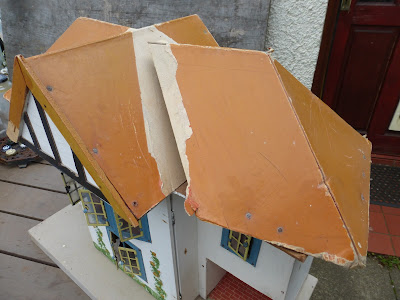 It has gone to another dolls house collector who found traces of red paint on the roof, so she has restored the roof to its original colour.  Doesn't it look nice now?  I'm happy it has gone to someone who appreciates it and has done such a nice cleanup and restoration, but with a light touch. 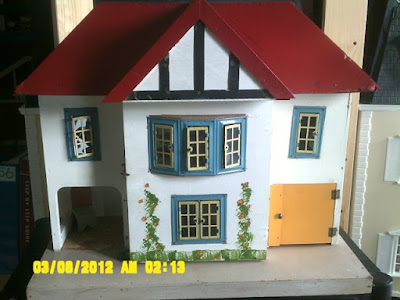 Your ebay write up for this house is amazing. Not many folks or sellers would go to the detail and thoughts that you did. You found a buyer who was ready to do the work!! The red roof is perfect!! and all within 20 days rather than another 20 years. I know nothing about dolly houses or have any interest in them - take too much space - but I sure enjoyed this post. Thanks to you and the buyer for sharing.

I think the reason I never did anything with it is that I'm not really into 'stockbroker Tudor' as a house style. The furniture that was going to go into it will now feature in some of my other dolls houses. I'm more into modern and retro 60s/70s styles - the opposite of what we are planning to do with the real house.