QGBI AGM and conference next weekend in Llandudno 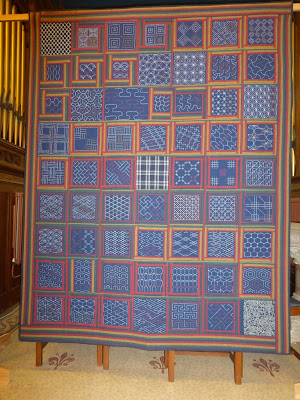 The Quilters' Guild of the British Isles (QGBI) AGM and Conference will be held at Llandudno this weekend.  The last time it was there was 2005 and I think it may have been the first time I showed the sashiko sampler from 'The Ultimate Sashiko Sourcebook' in the Region 13 exhibition which was held in a separate hall.  I can't find a photo of it there so this one is from the last Loch Lomond quilt show in 2013.

I have just started the blocks for my next sampler and I'm aiming for 150 designs, including as many variations of asanoha (hemp leaf) I can find.  I will be demoing the basic asanoha pattern at the conference weekend on Saturday afternoon.

The weekend is only open to members of the Quilters' Guild and has to be pre booked.  It is a really enjoyable event and I have made so many friends through the Guild over the years, I'm starting to loose count!  Looking foward to what will be (I think!) my eighth conference weekend.  The first time I went was Eastbourne in 2001, then Southport, Torquay, Llandudno, Eastbourne (again), Dundee and Harrogate. Some years I've had other events that clash, but we enjoyed the Harrogate weekend last year so much and next year's will be a bit long distance for us (Torquay).  The event moves around the country, so every few years there will be a conference fairly close to home.

UPDATE -  An announcement from the QGBI on Facebook this morning -


If you live near Llandudno we have a one-off shopping opportunity for you!
On Saturday 16th April our Conference Traders will be open to the public from 9.30 - 11.30, admission £3.00.

Labels: the Quilters' Guild of the British Isles

Which conference did we meet at ( fighting over a piece of fabric from 'out of Africa' then deciding to divide it between us!)

Eastbourne, 2001! I don't think it was exactly 'fighting' LOL, but it was definitely one of those 'go on, put it down' moments. Then realising we wanted different ends of of it anyway. I can't remember if you were after the more colourful half or me. And I have to admit, it is still in my stash!

BTW, are you going this year?