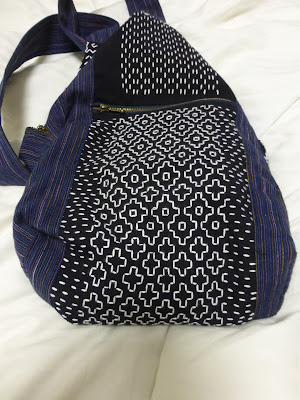 I needed a new version of my favourite 'Rice Sack Bag' for our Tokyo trip.  It ended up being made in a bit of a hurry, and finished off just a few hours before we left for Edinburgh. A version of this bag first appeared in '21 Terrific Patchwork Bags' in 2003 and the original bag was made in 2002.  It is just my favourite everyday bag. 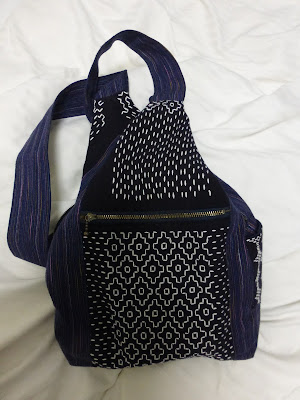 Once again, I wanted an outer zip pocket, as it is such a handy place to store our passports and boarding passes at the airport. 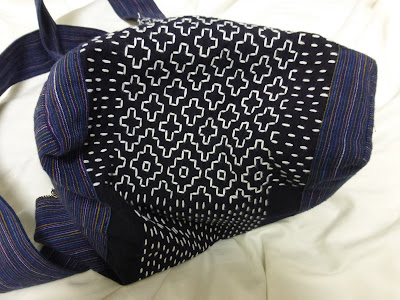 I also wanted to make it as a sampler, like my previous one, which has almost worn out.  Of course, the part of that one that has been the toughest part (Rice Sack Bag Mk. 6 I think) is the hiteomezashi section!  The rest of the bag has worn away, but the sashiko has survived very well.  Having a sampler is handy for classes, as I can use my bag as a sampler, as well as taking it as a bag.

This time, most of the patterns are variations on the same foundation rows - persimmon flower stitch, crosses stitch and yamagata (mountain shape) all merge into each other.

The side pocket, just the right size for Japanese travel cards and train tickets, is sorobanzashi (abacus stitch), from Yuza-machi.  I put it on the opposite end of the bag this time. 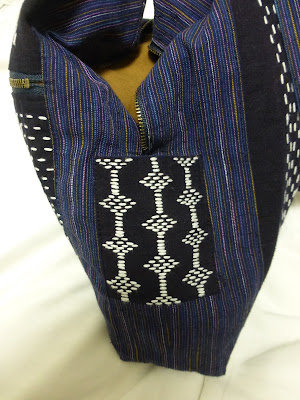 I left the back of the bag as mostly the foundation rows, so you can see how the patterns build up. 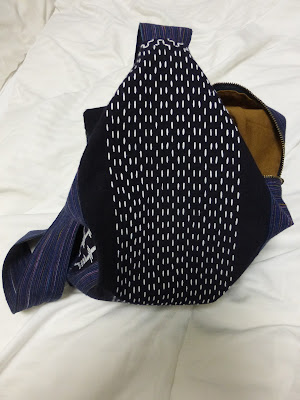 Why 'indestructible'?  I stitched it using a machine stretch stitch this time - three stitches forward and one back - as I think the movement and stretching bags this bag experiences when in use are the main thing that eventually made the stitches pop in my previous versions.  I give these bags a hard time!  There are also little reinforcement strips sewn inside the bag at important points, rather like the reinforcements used in kimono construction.  There is a lot going on inside that you can't see now the lining is in.

Some of my students have asked for this for a class, so when I've got dates fixed up (for Edinburgh and maybe for Stockton), I'll get them posted.

Here's the bag on its first outing - 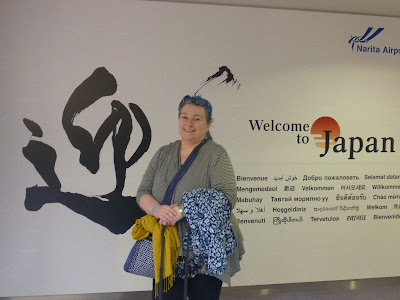