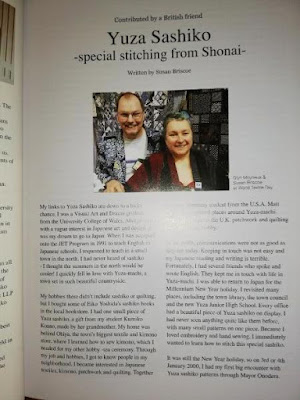 Reiko Domon posted some photos this morning of the new Yuza Sashiko book, The Magic of Yuza Sashiko, which their guild have just published.  I haven't seen it yet but hope to get my copy soon.  Yuza Sashiko Guild will be bringing copies for sale when they come to the Scottish Quilting Show at SECC in early March and also at Dornoch Fibre Fest, and we are planning a book signing session at Kaleidoscope books in between those events. I will share more info as I have it.  Hopefully I'll get some copies to sell on my website too.

They asked me to write a couple of pages for the book, explaining how I got interested in sashiko and kogin, so I've pasted the text for that below. 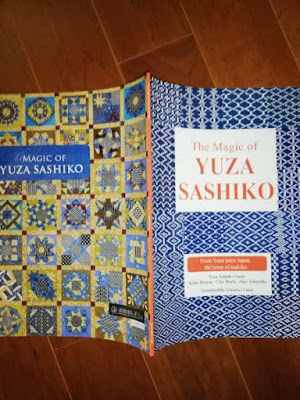 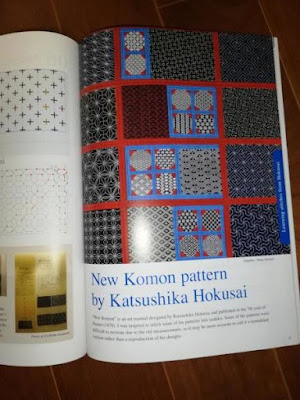 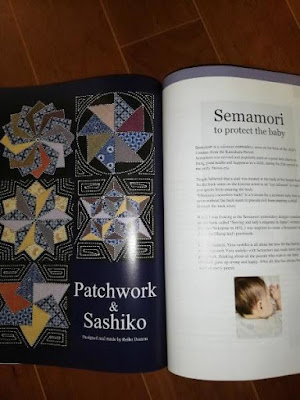 My links to Yuza Sashiko are down to a lucky chance. I was a Visual Art and Drama graduate from the University College of Wales, Aberystwyth, with a vague interest in Japanese art and design. It was my dream to go to Japan. When I was accepted onto the JET Program in 1991 to teach English in Japanese schools, I requested to teach in a small town in the north. I had never heard of sashiko - I thought the summers in the north would be cooler! I quickly fell in love with Yuza-machi, a town set in such beautiful countryside.

My hobbies there didn’t include sashiko or quilting, but I bought some of Eiko Yoshida’s sashiko books in the local bookstore. I had one small piece of Yuza sashiko, a gift from my student Kumiko Konno, made by her grandmother. My home was behind Obiya, the town’s biggest textile and kimono store, where I learned how to sew kimono, which I needed for my other hobby - tea ceremony. Through my job and hobbies, I got to know people in my neighborhood. I became interested in Japanese textiles, kimono, patchwork and quilting. Together with our homestay student from the USA, Matt Wandell, I explored places around Yuza-machi. When I returned to the UK, patchwork and quilting became my big hobby.

In the 1990s, communications were not as good as they are today. Keeping in touch was not easy and my Japanese reading and writing is terrible. Fortunately, I had several friends who spoke and wrote English. They kept me in touch with life in Yuza-machi. I was able to return to Japan for the Millennium New Year holiday. I revisited many places, including the town library, the town council and the new Yuza Junior High School. Every office had a beautiful piece of Yuza sashiko on display. I had never seen anything quite like them before, with many small patterns on one piece. Because I loved embroidery and hand sewing, I immediately wanted to learn how to stitch this special sashiko.

It was still the New Year holiday, so on 3rd or 4th January 2000, I had my first big encounter with Yuza sashiko patterns through Mayor Onedira. When I told him I would love to learn Yuza sashiko but didn’t know how, he immediately got out his mobile phone, explained that his friend’s wife taught sashiko, and called Chie Ikeda. Half an hour later, I was at her home, surrounded by the most beautiful pieces of sashiko. I was amazed - it was like a dream! Before I came home, I had another lesson with Ikeda sensei. She was so patient. My first attempt at hitomezashi was full of mistakes and I had to unpick and redo it several times. She gave me a sampler so I could learn more patterns.

In 2001, there was a big cultural exchange visit from Yuza-machi to Stratford-upon-Avon in the UK (they are twin towns), with a mini matsuri festival celebrating the annual traditions of Yuza-machi. Hideo Abe, my friend from Yuza Town Council, contacted me and said that Reiko Domon, my former next-door neighbor, would attend with members of her quilt group Peaceful Heart. I arranged an English tea party with Hathaway Quilters in Stratford where the Japanese quilters did a show and tell of their work. Domon sensei asked me to make two small quilts including sashiko for their exhibition, and the start of our long quilting exchange began. Over the years, I have sent many quilts to their exhibitions, including work by my sashiko students, and they have loaned many to mine.

On my next trip to Yuza-machi in 2002 I met Domon sensei, Ikeda sensei and other sashiko enthusiasts. I made several small pieces of sashiko after my 2000 trip, but now I had more inspirations, understanding how the patterns worked. I started creating sashiko designs for UK quilt magazines and began teaching sashiko while working on my Post Graduate Certificate in Education Post compulsory (a teaching qualification for teaching adults). I also designed kits for Euro Japan Links Ltd.

The first UK Festival of Quilts at the NEC Birmingham was held in August 2003. The president of the Quilters’ Guild of the British Isles, Janice Gunner, who also works with Japanese textile techniques, suggested an exhibition of Yuza sashiko as part of the quilt show. Domon sensei, Chie sensei and other members of Peaceful Heart (who were becoming sashiko specialists) came to the UK and had the first big sashiko exhibition here. It was a great success, including antique and contemporary sashiko, and ‘make and take’ lessons for visitors too, teaching sashiko ‘from hand to hand’.

I wrote a patchwork bag book in 2003 and I suggested to my editors that we should have a big sashiko book in English. So ‘The Ultimate Sashiko Sourcebook’ (2005) includes all styles of sashiko. Yuza sashiko stitchers contributed many works. I made small pieces of kogin and Nanbu Hishizashi to illustrate the history chapter, but I didn’t really know the technique, so in 2006, I had my first kogin lesson with Keiko Abe in Yuza-machi, and in 2014, through Izumi Sato’s sister-in-law, I met Yoko Sato in Hirosaki and had another kogin lesson. My kogin obsession resulted in ‘The Ultimate Kogin Collection’ (2019), but my first sashiko love will always be Yuza sashiko.

Yuza Sashiko (Guild) was founded in 2008. They visited the UK in 2010, 2014, 2016 and 2018, each time teaching at one of our larger quilt shows. I arranged for their work to be shown at many quilt shows in the UK, including the quilt challenges ‘Treasures of Yamagata’, ‘Dream of Shonai’ and ‘Maruike-sama (the magical blue pool at Mt Chokai)’, where they have combined sashiko with patchwork and quilting in innovative ways. It is a wonderful thing that a traditional technique can be preserved and transformed, and used as a way of spreading happiness and friendship around the world. Let’s share Yuza Sashiko and stitch together!