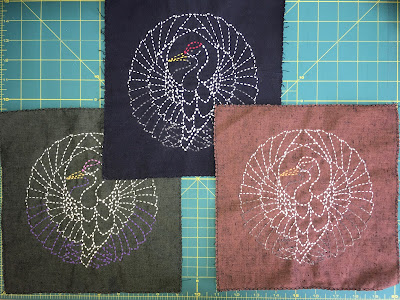 I have been busy stitching several different versions of many of my blocks, before I deal with separate posts on the more complex ones and group the easier ones (mainly the geometrics) together for other posts. First, I need to update you on my next Sewing Street TV show, which has been moved from Monday 14th September to Monday 28th September, to allow more time for the show stock to arrive from Japan. I will be on at 9 and 11am for a full hour each time, on Sky 670 and Freeview 74, and of course the show will also be on YouTube - I will post a link to that as soon as I can after the live show.

The three cranes shown above are from my first block set (all the kamon blocks) on black, my second block set (kamon and geometrics from the first panel set on russet), and a third version on green (all the blocks from both sets - 32 large and 32 small blocks!)  To remind you of the coordinating colours, here are photos of the print fabrics and threads for all three sets - 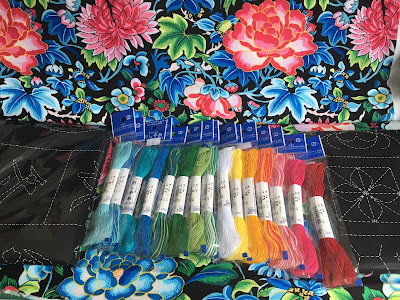 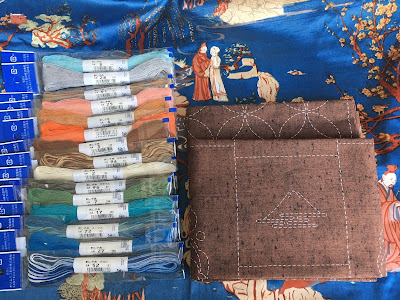 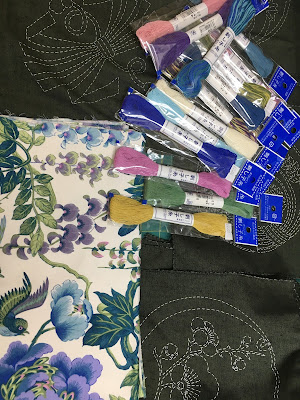 I haven't rejected the red and gold 'Victorian' block set, but I wanted to start stitching on the green panels asap, so jumped ahead to that one! I sometimes feel that the green colourway gets a bit overlooked - indigo blue is the most popular, followed by the other colours, but green is always at the end. It is lovely soft green and looks fantastic with this vintage chintz furnishing fabric and I wanted to try stitching with the softer blues, pinks and purples. There isn't actually any yellow ochre in the print, but I didn't want to be restricted to using cream or green for the rice sheaf design, and there are actually not so many green threads that really look right with this multicoloured fabric, so I wanted to use it for the gingko leaves as well.

I thought you might like to see how I dealt with the cranes on each colour. On black, I used red for the top of the cranes' head, with golden yellow for its beak, and shaded grey for the tail, the back of the wing and the neck. Real cranes have black feathers as well as white, and although of course the background fabric is black, I wanted to indicate the different coloured plumage through my sashiko thread too. I've used a mixture of doubled and single threads as well. 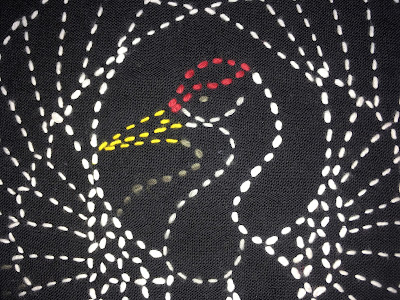 For my russet sampler, I don't have a red thread in my palette, because I'm using threads that coordinate with the fabric print. The closest I have is this peach shade. I don't have any yellow either, but the persimmon orange made a good alternative. I tried stitching the beak outline doubled this time, because I thought the persimmon might blend into the background fabric a bit too much. 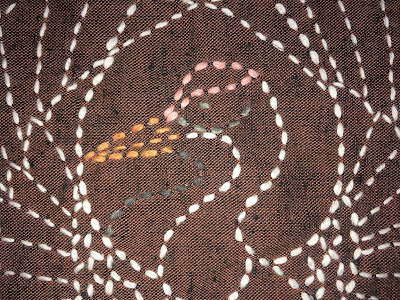 For the green fabric colourway, I used a pinkish purple for the top of the head and the yellow ochre for the beak, this time stitching all of the beak with a doubled thread. I used purple for the 'black' wing and tail feathers. It doesn't have a strong contrast with the green at the moment, because the value of the green fabric and the purple thread is probably a bit too close, but once I have hand quilted around the crane's outline, it will add a bit more definition - the same goes for the varigated grey on the russet as well. 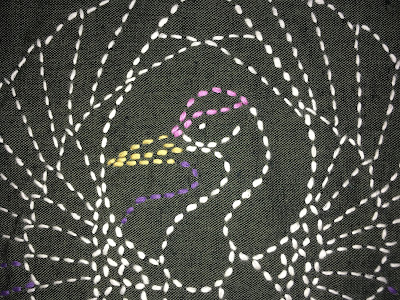 Here's all three blocks together. I didn't stitch this block first because it was my favourite block in particular, but because I managed to decide on the thread colours quite quickly for the green block. The russet is on the right in both photos, even though it looks a bit more like the brick red colourway in the second one. 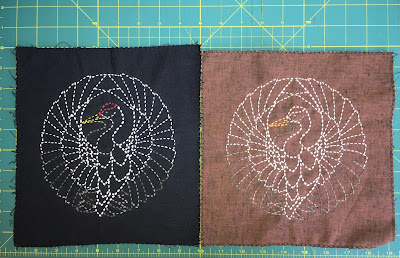 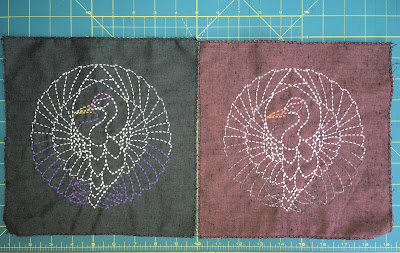 Another block that I would put into the 'fiddly but worth it' category (!) is the rice sheaf kamon. On black, I used the golden yellow and stitched the cord around the sheaves alternating between red and white, celebratory colours in Japan. I have taken step by step photos of how to do this colour alternation and will put those in a future tutorial. On the green, I used doubled cream thread for the same cord, with the yellow ochre for the sheaves. 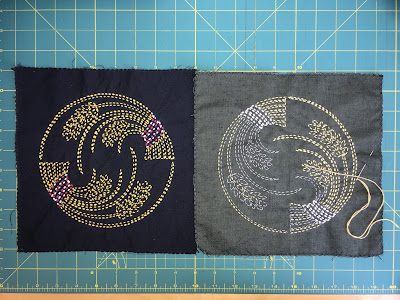 The waves kamon actually uses the same shaded blues/tuquoise thread for all three blocks. I just love that thread! It is paired with white on the black fabric, but with cream on the other two. The green version looks different again because I didn't extend the cream beyond the 'crest' of the waves to go right around the design, but stitched that part in the varigated thread instead. 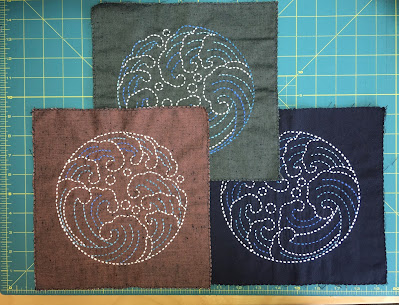 Once again, when there is wadding (batting) and extra quilting added, it will throw the edge of the wave kamon into greater contrast. 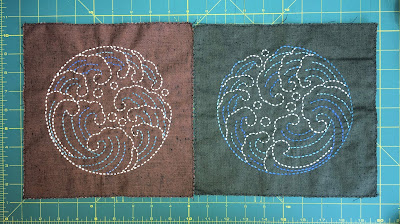 So far, the only geometric blocks I've stitched have been from the russet set, where I drew a circle on each block and only stitched within the circle (see previous post) turning a square sashiko design into a circular one. Again, the circle edge will be defined better once there is wadding and extra quilting. On both these blocks, I haven't washed away the stitch markings yet.  The two black geometric blocks with the same designs were stitched for another project I haven't made up just yet. I've used bright blue and turquoise on the russet, which are closer in value to the background than the yellow ochre and ochre/green varigated thread I've used on the black. 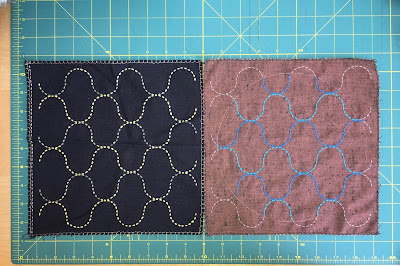 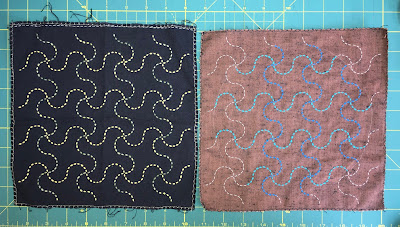 My general thoughts on stitching the blocks in colour so far?

1) Often, you need to compromise slightly on the exact thread colour you want, because that shade may not be available in sashiko thread.

2) Just about any colour (other than black) shows up well against black.

3) I have to think a lot more carefully about thread colour on the mid value fabric colours, like russet and green, than on the darker black or indigo, or the light grey (taupe) or light blue.

4) It helps if you can accept non naturalistic colour and motif combinations! I may have some strangely coloured flowers...

It is an adventure and I'm enjoying experimenting with different colours.

On the TV show, I am going to give some basic techinique demos to go with all the blocks, and will also be reading you through the block and strip sizes for the quilt, so have a notebook to hand when you watch!