Kogin Special - for Jane and Miriam

After Jane's comment on my previous post and her request for information about kogin, here are some photos of kogin stitched by my friend Keiko Hori. She learned how to stitch kogin while visiting Aomori prefecture over twenty years ago. I didn't know she stitched it (as well as sashiko, patchwork, quilting and counted embroidery techniques) until we got chatting about it in the supermarket in Yuza on my last trip. 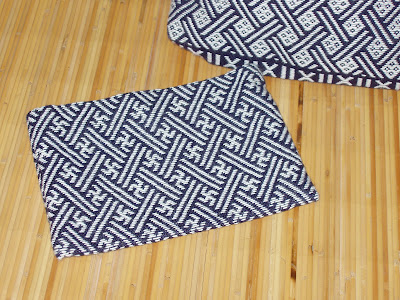 A couple of days later, I went to her house for a kogin lesson. I really enjoyed it, although it takes a lot more concentration than (even) the more elaborate hitomezashi (one stitch sashiko) stitches. Maybe it gets easier the more you do. This is what I stitched that afternoon (only the part on the blue). 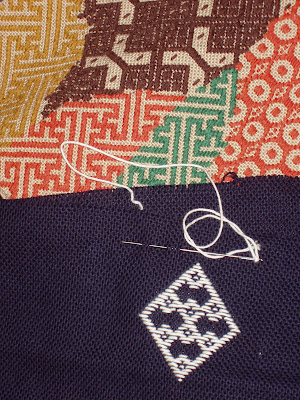 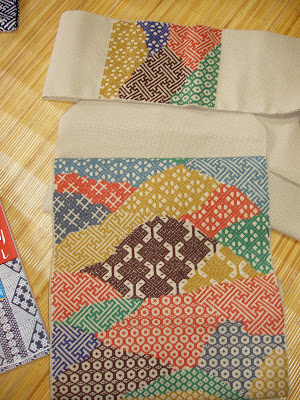 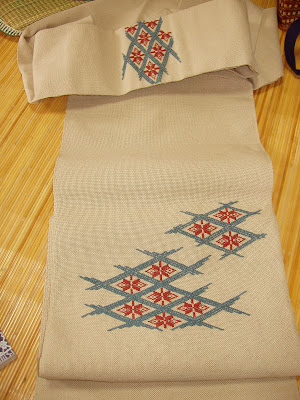 Keiko's work is beautiful. Here are some details - 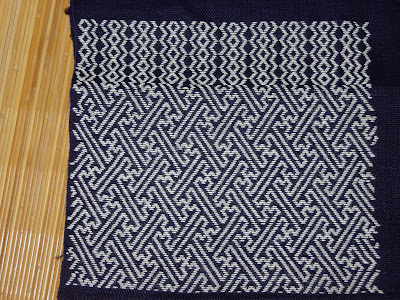 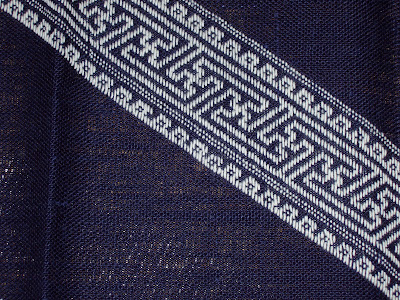 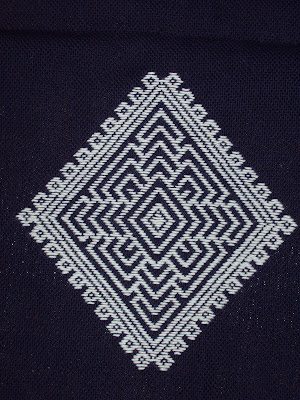 Kogin is a kind of counted sashiko and is named after a koginu (a style of farmer's jacket from Aomori Prefecture). It is generally accepted to have developed from something similar to the pattern darning style of some hitomezashi (one stitch sashiko) patterns. It is counted over and under uneven numbers of threads, while a subgroup of kogin called nambu hishizashi (Nambu-region diamond sashiko) is stitched over and under even numbers of threads. There is quite a bit of information about it in the history section of "The Ultimate Sashiko Sourcebook", although actually including any specific kogin patterns were outside the remit of that book. Here are a couple of small samples I made for that book - a kogin panel first, stitched on dark blue prairie cloth - 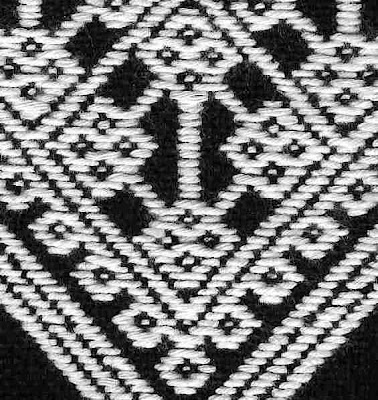 Old pieces of kogin and nanbu hishizashi are much rarer than old sashiko. Kogin is traditionally stitched with cotton on hemp, though nowadays cotton or even wool cloth is used. Nanbu hishizashi was stitched using colourful imported wools for about thirty years at the start of the last century, but was originally cotton on hemp too. This is my nanbu hishizashi sample. I used 28-count evenweave embroidery fabric and crewel wools in the same colours as the original wools, which look like Berlin woolwork threads - 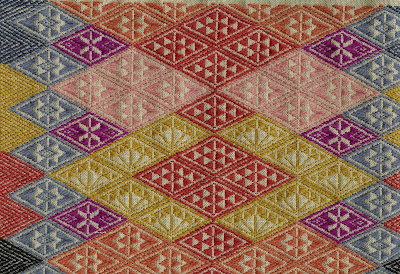 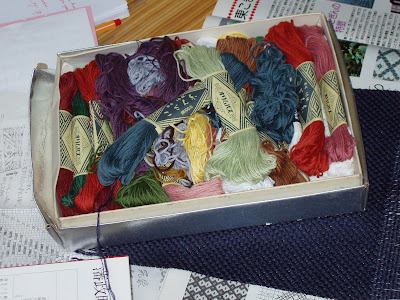 Some pieces of sashiko stitched in Akita prefecture are technically kogin, as they are counted, like the end panel on this traditional headscarf. 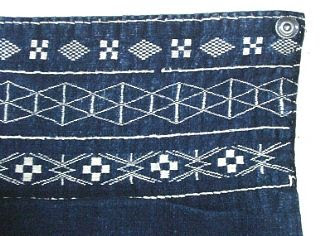 I found it! Here is a chunk of text from the first draft of "The Ultimate Sashiko Sourcebook" history section, including more about kogin than appeared in the final version. The "Kitamaesen" was a trade route, from Kobe/Osaka area and up the Western side of Japan.

Some Shonai sashiko patterns resemble kogin, a form of counted embroidery from the Tsugaru region, around Hirosaki, . Also known as sashikogin, it is a tradition in its own right and is thought to have evolved from sashiko. Thick white cotton thread is stitched along the weft of coarse hemp fabric, over and under odd numbers of warp threads, in unique patterns. By comparison, Shonai sashiko is not a primarily a counted technique, although some older work was counted. There are three kogin styles - Nishi or western (diamond patterns and dense stripes over shoulders), Mishima or triple stripe (from the north - three bands dividing patterns on front and back) and Higashi or eastern (large overall designs continuing from front to back without a break).
Tsugaru was a prosperous rice growing area. Kogin is from koginu, a dialect word for a farmer’s unlined work jacket, first appearing in Tsugaru clan records in 1685. The local ‘Frugality Act for Farmers’ of 1724 forbade the wearing of cotton fabric, so kogin used cotton threads darned into hemp cloth. Late eighteenth century records mention kogin as farmers’ wear, mostly white on indigo, although indigo on white was used for women’s festival. Cotton was permitted after the Meji Restoration (1868) and kogin became increasingly elaborate, for special occasions and bridal trousseau. In the 1890s, the railway came to Tsugaru and factory made textiles became readily available, including wool. Kogin declined in the early twentieth century but has been revived recently.
Nanbu Hishizashi (diamond sashiko) is similar to kogin and comes from the southeast of Tsugaru, eastern and . Counted over and under even numbers of warp threads, patterns are based on the small diamond units forming part of the Nanbu clan crest. The earliest example is believed to date from 1850s. Hishizashi was originally stitched on cheaper pale blue hemp fabric, as the area was historically less prosperous than Tusgaru, and only one layer of fabric is used. Bright aniline-dyed threads were introduced in the early twentieth century. The range of kogin and hishizashi patterns is beyond the scope of the present book but a similar effect may be obtained by adapting some Shonai patterns for counted embroidery, particularly diamonds and diagonal patterns. Any similarities of pattern between work from Shonai and seem to be coincidental. Evidence does not suggest that either tradition directly affected the other, although influence of the Kitamaesen cannot be ruled out.
Posted by Susan Briscoe at 17:59

Thanks for this post Susan. It is very informative and the pictures are really wonderful! You wrote it already in february, but I only found it today while I was browsing the internet.