Today has been wet all day, so it is not possible to take the quilt outside for a photo. At six and a half feet long (just under 2 metres), I can't hang it anywhere in the house where I can stand back far enough to get the whole quilt in one photo, but there are some details of the borders already in the camera, so I'll add those after dinner.

I must weigh this quilt. At the end of September, I'm going to Denmark to teach and would like to include this quilt in my talk - most of my 23kg baggage allowance is going to be a selection of the "Sashiko and Japanese Country Textiles" talk, including some of the old furoshiki and items from the two sashiko books. It would be nice to be able to take a couple of sashiko quilts, perhaps even the sampler from "Japanese Sashiko Inspirations" and the Kasuri Sampler from "Japanese Quilt Blocks to Mix and Match" too. I am back at Denman College teaching another sashiko course at the beginning of October, so of course I want to be able to show it there too, as that's where it all began, last September. It would also be great to be able to send it to Peaceful Heart Quilt Group for their sashiko exhibition in October, but it might be difficult to get it back for a while...

The binding is the dark blue Olympus tsumugi cotton sold by Euro Japan Links Limited. It makes a perfect binding fabric to go with the narrow width striped tsumugi cotton I use for borders. I have used a double binding, good for wallhangings as the double layer of fabric makes the binding firmer, plus it is easier than single layer binding for doing the mitred corners - the technique is shown in my "Compendium of Quilting Techniques" (with the same fabric on another quilt). 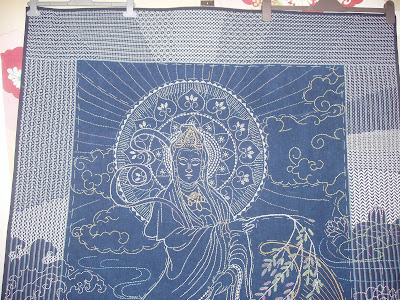 Increasing the stitch density on either side has worked - follow a line from the top of the lighter border sections across the quilt and you should pass (more or less) through the eyes of the goddess.

Top border right and left hand details - the first photo shows part of the quilt border from the back (left) - the blue and white jacquard backing fabric looked like a miniature version of the hishizashi (diamond sashiko) pattern. There are three versions of kikkou (hexagons), which are made by weaving extra thread through the yokogushi base stitches - vertical on the left side, and two horizontal versions on the right (one has an extra stitch in the centre of the hexagon, while the other has open centres but slightly thicker thread used for the weaving). 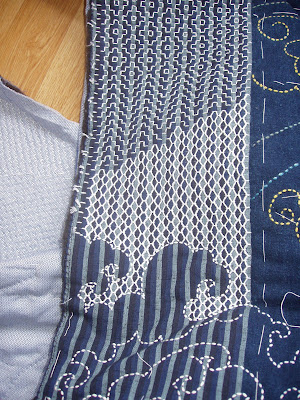 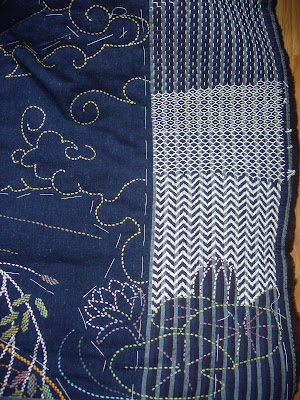 Bottom right border detail - variations on kakinohanazashi and yama patterns merging into each other. 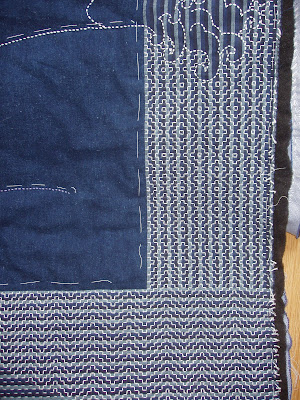 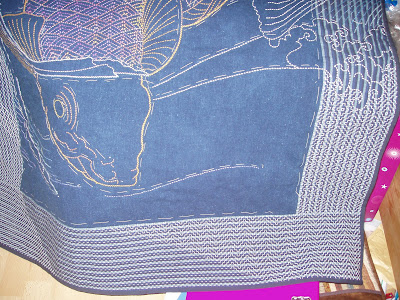 Tomorrow's quilting - finishing the block centres for my Swedish quilt (simple shippo-style four petalled "flowers") and continuing with the spiral quilting on the rest of the random Log Cabin blocks. After the dense stitching on the Denman Kannon, I hope this quilt will go more quickly. While sewing the border on Kannon today, I realised that the Swedish quilt is almost twice the size - the edges of the quilt are approx. 90in and 7oin, wheras the Kannon edges are 77in and 45in.
Posted by Susan Briscoe at 21:34