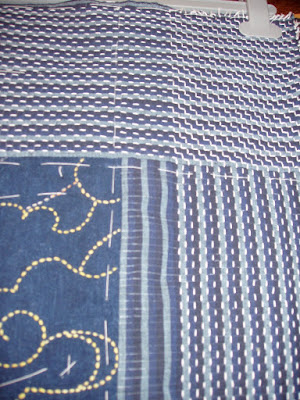 The threads from Euro Japan Links arrived at 12.30 today. I had a tiny amount of the Olympus antique white thread left (I used up all the oddments I had of that thread this morning).

First I filled in the last few vertical rows on the right hand border (top photo). Where the stitch lines cross in the border corners it made sense to use a hitomezashi stitch with vertical and horizontal lines, so this top right corner is a dantsunagi (linked steps) design. If I had more time, I might stitch part of it with diagonal lines, to turn it into a yabane (arrow feather) pattern, but I don't think there will be enough time to do this. I need to get all the border stitching done before I machine sew the first stage of the binding, as I am going to hide the starting and finishing knots around the edge inside the binding.

Today we had heavy rain most of the day and the air felt damp. I didn't want to mark up the bottom half of the border just yet, because the damp atmosphere could make the lines start to disappear (I'm marking with a Clover White Marking Pen (fine), which comes off with water!) So I continued filling in the patterns across the top, all variations on komezashi (rice stitch) and juujizashi ("+" stitch) - the komezashi patterns are done with diagonal lines on a foundation of juujizashi. The first photo below shows the beginning of stitching these sections (the edge of each section marked with a tacked line, as before). Simply changing the position of the diagonal line - from linking the edges of the + stitch, to linking the + stitch centres, to going between the stitches - makes the difference between the patterns. The stitch on the far left of the photo gives a woven effect (I don't know the name, although I've seen it on some old sashiko pieces), the one next to it is masuzashi (square measure stitch - there is another pattern with the same name), then komezashi and the komezashi variation (you could call this kowari komezashi - just means "rice stitch variation"). I think Chie Ikeda mentioned that this last stitch variation came from Yonezawa, Yamagata Prefecture. Click the photos to see more detail.