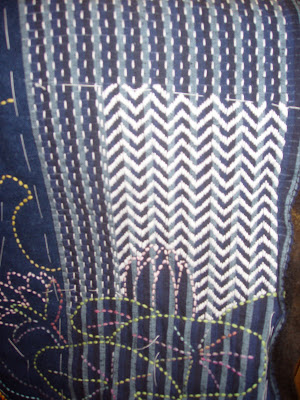 I got delayed starting stitching today - but found out how to change the ignition monitor on a Vauxhall Cavalier, after I had to get the AA out because my car wouldn't start. As the spare part won't be in stock till Friday, and I really can't take time out taking the car to a garage for such a tiny job (leaving it, coming home by bus and back to collect it would take up too much time = less sewing time!), I got a quick lesson in how to undo the various plug ins and put the new one in when it arrives and, for the meantime, the car has a second hand part in it... More success than trying to match the innards of one of the bathroom taps at B & Q (Guy will try Plumb Centre tomorrow), although I hadn't seen the part inside the tap in the house first. If I had, I think I might have spotted the lack of a screw fitting for the top of the tap. Spending so much time looking at geometric things and fitting patterns together gives one a good eye for this kind of thing!

Back to stitching just after lunchtime. I finished the komezashi variations from yesterday. As they have taken more than twice the time to stitch than patterns like kakinohanazashi, I feel justified in using them for only small accent areas at the top of the border. The lower border section will have variations on kakinohanazashi and I will divide that border in a different way - something that reflects the feeling of the waves I think.

The photo (slightly out of focus) shows a section of sugizashi (cedar stitch). I wanted to include this as a reference to the cedar forrest on My Haguro, where I bought some of the threads. It isn't difficult to build up from the basic foundation rows. Look closely at the point where the completed pattern ends on the left and you will see an extra row midway between two foundation rows. The other two rows are basically fitted into the gaps. It is an old stitch and was often used on sorihikihappi (sled hauling waistcoats) in Shonai, like the one in the photo below. 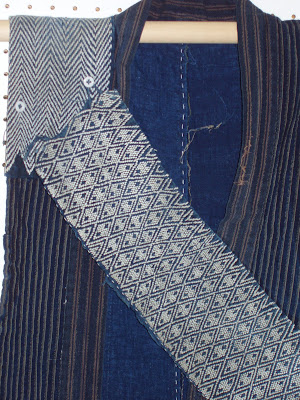