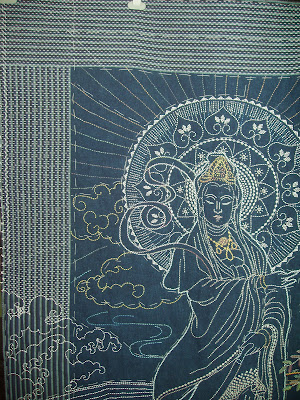 After doing the foundation stitching across the top of the border yesterday, I started stitching across those lines, to make the patterns appear - as if by magic, as people used to say. It is quite magical how simple rows of running stitch suddenly start to reveal patterns. This is a fascinating feature of hitomezashi (one stitch sashiko) and one of those things I like to play around with, as so many patterns can be magic'd out of the same basic rows. The photo above shows how far I got yesterday - the top border is stitched all the way across.

So any patterns where the stitches cross would have the vertical stitches crossing each time, like komezashi (rice stitch), I stitched the first rows going along the top border but across the side border. I am going to switch to always stitching along each border first, as this firmly quilts the layers before I'm constantly turning the work and makes stitching easier.

To get the kakinohanazashi (persimmon flower stitch) and the yamazashi (mountain stitch) to appear in the same border, I switched between stitching staggered rows (yamazashi) and alternating between single rows and paired rows staggered (look at the ends of the horizontal rows in the middle of the picture). By doubling up on every third row when I stitched the second part, both stitch patterns appear. 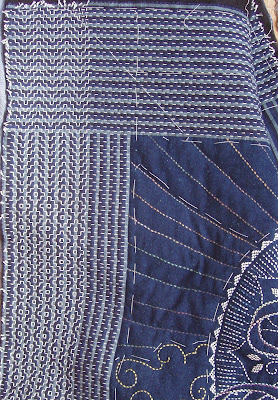 I marked the divisions between the different stitches with a tacked diagonal line, roughly continuing the "rays" behind the halo.

The next section across the top is stitched a little like juujizashi ("+" stitch), but with the second set of stitches in the gaps left between the first, rather than actually crossing the first stitches. 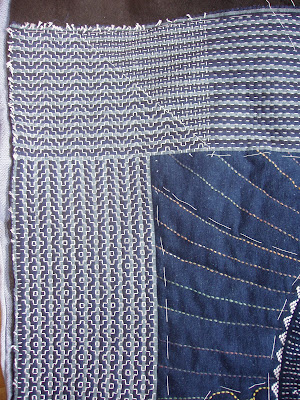 Yesterday I realised that I would run out of the main sashiko thread I'm using, even though I'm using it singly - Olympus sashiko thread (100 metre) in antique white (colour 101). I have eked it out and blended in a couple of other threads (Yokota medium white and a thicker sashiko thread Chie Ikeda gave me), but the thicker sashiko thread is harder to stitch through the backing and wadding. Having a little variation in the threads makes for a subtle change across the border which I like, so I am going to try a similar effect in the bottom half of the border using Yokota brand cream and the Olympus cream from the same range as the antique white. Just to be on the safe side, the first thing I did this morning was phone an order for two more antique white skeins to Euro Japan Links Limited - these will (most likely, knowing how quick they are!) arrive in tomorrow's post around lunchtime. If I run out before then, I'll switch back to working on the Lulea Blockhus quilt until the new threads arrive.

Back to stitching! I'm just glad the side borders at the bottom are shorter (less stitching)...
Posted by Susan Briscoe at 16:30