I didn't get any photos on Friday's preview, but here are the first of the girl's yukata demo sewing. If you are planning to sew yukata or other kimono you might find this useful. The fabric we are using isn't a real kimono fabric, but the cotton crepe handles very much like silk crepe.

First, here are two handy ways of cutting fabric for kimono, both techniques I learned at Obiya kimono shop in Yuza all those years ago. Click the photos to see them at full size for more detail.

Especially when dealing with crepe ("chirimen") it can be tricky to cut the fabric along the line of a thread, either across the bolt or along the grain. If we were using a real kimono bolt, we would first need to cut across the grain - for the 114cm width, we needed to cut it into strips first - one 66cm strip for the body, one 17cm for the collar and collar cover and the remaining strip for the sleeves and front overlap panels (x2).

Snip the fabric where you want to start the cut. Take hold of one of the threads in the direction you will cut and pull gently. The fabric will pucker along the line. 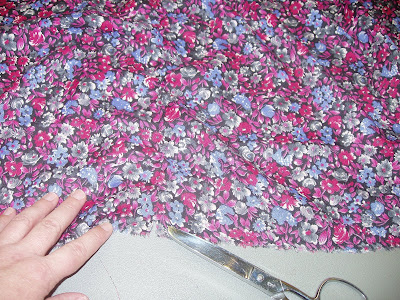 Relax the thread slightly so the line evens out a little. You will be able to see the thread you pulled (easier to see if you click on the photo and view at full size). Cut along that line. For a long cut, you will need to work in stages. 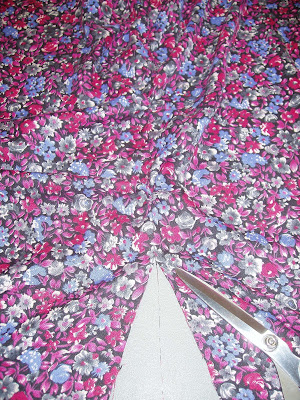 Another cutting method especially useful for long narrow pieces is to cut along a fold. Make sure the fabric is folded exactly in half, as required for your cut (good for cutting a kimono bolt width in half for collar and overlap panel pieces). Slip the scissor blade into the fold and, using your non-cutting hand to keep a tension on the fabric by leaning on the table, carefully cut along the fold. 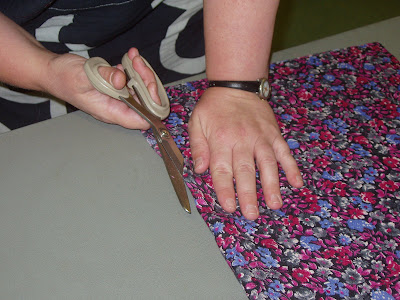 Here are the kimono pieces cut out - clockwise from top left: two overlap panels, strip for collar and collar cover (to be cut later), body panel cut as one piece, two sleeves (bottom left in photo). As the all over pattern doesn't have an obvious right way up, I decided to leave the body panel in one piece and replace the centre back seam with a centre back tuck. The cut part of the body is the front. For the neck, I have cut a straight slit across the shoulder line. Once the horizontal tuck is sewn across the back of the body just below the armhole, the neck slit will move back into the correct position for sewing the kimono collar. 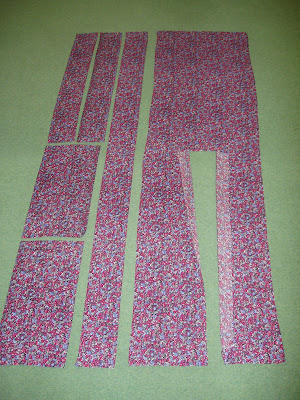 The pieces mocked up into a kimono shape, with the back of the collar strip folded outwards - otherwise, you wouldn't be able to see it. The fabric pattern is very much like a Japanese komon (small pattern) design, which tends to camouflage seams. 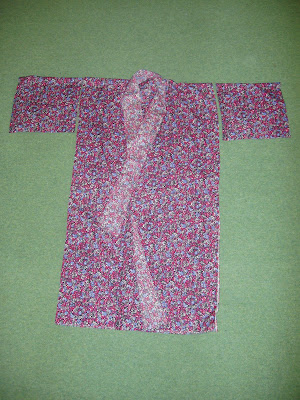 First, we sewed the sleeves. For a yukata, these are rather short, but we only had a few metres of fabric and the yukata is probably going to be used as a dressing gown anyway, so longer sleeves might get in the way for the eight year old future owner. The sleeves are folded in half, right sides out and with the bottom edge of the sleeve at the bottom of the photo. They are set out as right and left sleeves (just imagine hands coming out at the sides!) First, a quarter inch seam is sewn across the bottom of each sleeve, making two tubes. 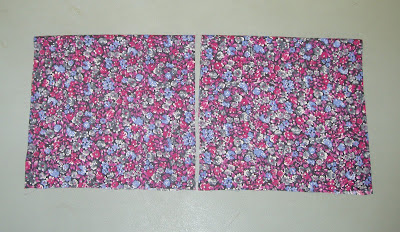 Before going any further, I needed to make a sleeve template. This is to mark and later press the curve at the bottom corner of the sleeve, under each wrist opening. A younger girl/young woman will have a larger curve here than an older woman. A drinks mat (approx 4in) is about the right thickness of cardboard, but any reasonably heavy card will do. Mark and cut the curve. 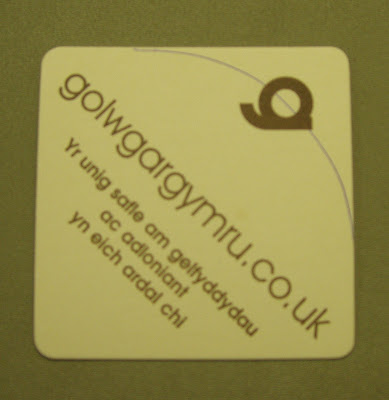 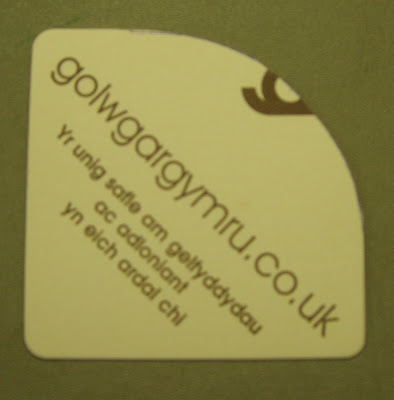 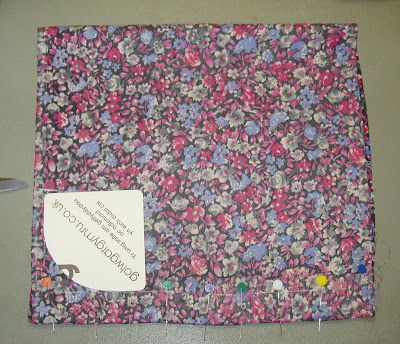 Scraps of fabric were cut into 1/2in squares, to use as reinforcements at the wrist opening (the needle shows the end of the seam). They are sewn on either side of the end of the seam. As Maureen pointed out, rather like sewing on two buttons, one reinforcing the other. The same kind of reinforcements are used where the sleeve is sewn to the body (more next week!) Not all kimono have them directly under the wrist opening, but I like to use them there as it makes the end of the seam stronger and less prone to tearing, especially when the wearer isn't used to the closed wrist of the kimono sleeve. Sorry these photos are slightly blurry - my camera doesn't really like the macro setting. 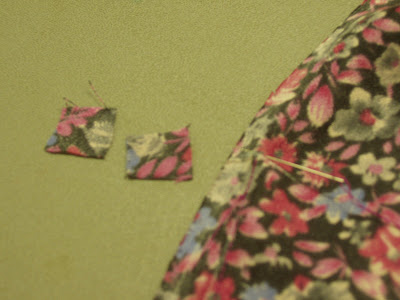 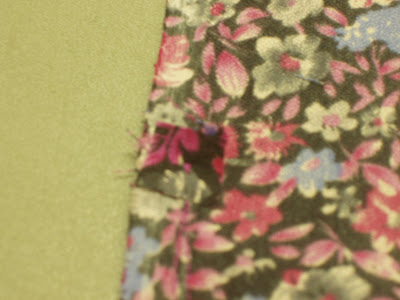 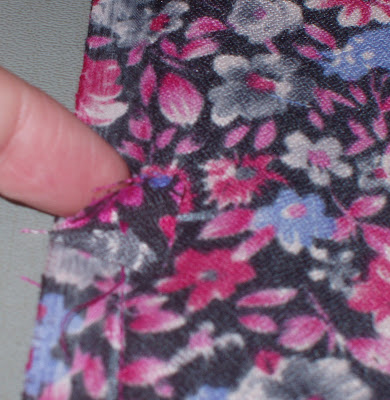 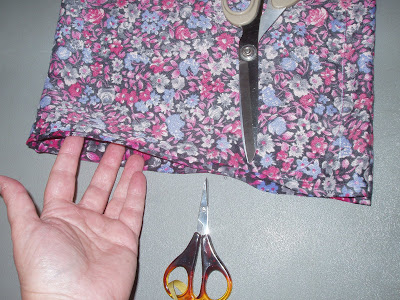 I pinned the centre back faux seam as a tuck right along the length and Maureen sewed it by machine. The photo shows the back "seam" at the collar end. She is going to overlock the side seams, the front body cut, the edges of the collar strip and the body side of the overlap panels before next Monday. Normally the sides of the body and the front opening would both be edges of the kimono fabric if cut from a 14 1/2in bolt, so they wouldn't need any finishing. 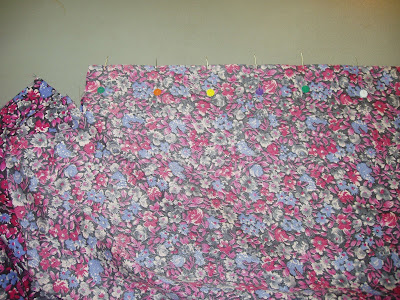 Maureen brought a vintage Japanese dressing gown kimono from her collection. It has been handed down in her family and dates to the 1920s. The yuzen dyeing is very good quality, certainly equal to many "real" kimono of that era. The placement of the motifs is different from those on a proper kimono and there are no overlap panels at the front. The style of the dressing gown is similar to a hanten jacket rather than a kimono or juban (under kimono), but the red silk habotai lining is just like a normal awase (lined) kimono of that time. It has a small "Made in Japan" label inside. 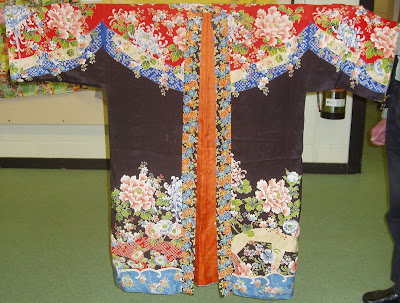 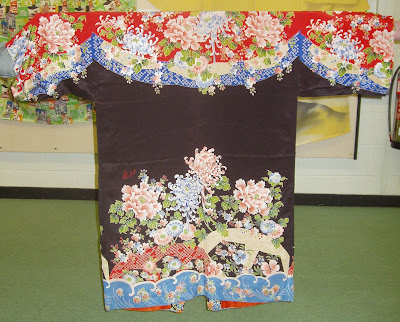