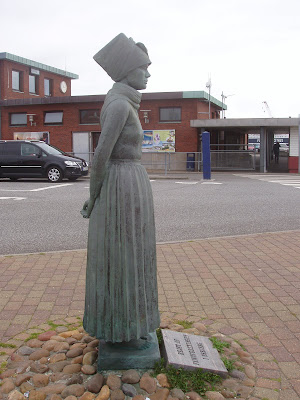 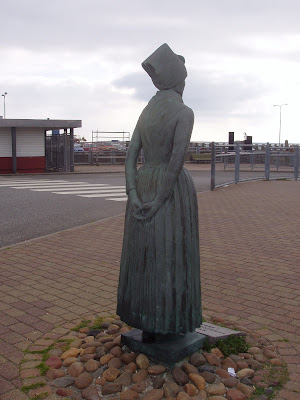 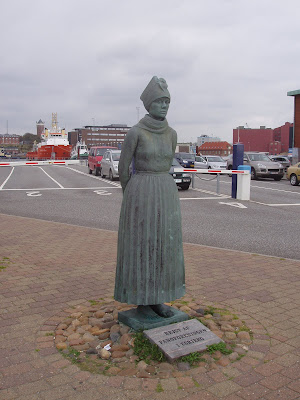 The unique style of women's headscarf (Fanø tørklæder) and face mask worn as part of Fanø's traditional costume was very interesting, as it is so similar to Shonai traditional work wear, although not related in any obvious way. The statue above is at the ferry terminal in Esbjerg. The two places have similar weather problems for anyone engaged in farm work outdoors, particularly the wind blowing in off the sea. Women didn't want to get suntanned and weather-beaten, so in both places they wore face masks to protect their skin (hanko-tanna in Shonai - click here for a Google translated blog link with a picture) and different kinds of head-coverings. Another feature of the costume on Fanø is a strap tied around at hip level, so the skirt and apron can be tucked up for work, functioning very much like the ohashori horizontal fold on kimono.

Your can see some photos of the Fanø costume at the museum's website. There are many more on display at the museum itself, which we visited on Saturday afternoon (it isn't open on Sunday)

The scarves weren't made on the island but were brought back by men for the women in their families. I think the modern cotton ones on sale at the museum may be made in Bangladesh? (I'll check that). Cotton were used for everyday and silk for best. The large scarves worn the traditional way by adult women are 110cm square and are worn as matching pairs. The pink edged ones in the photo are silk, but I can't remember which of the others are silk and which are cotton. 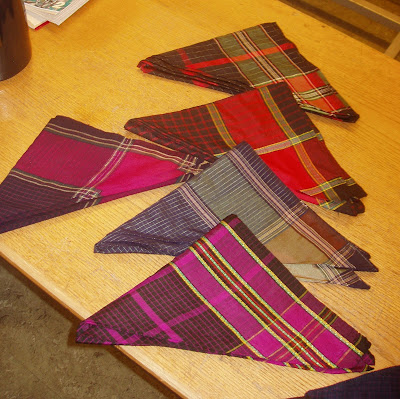 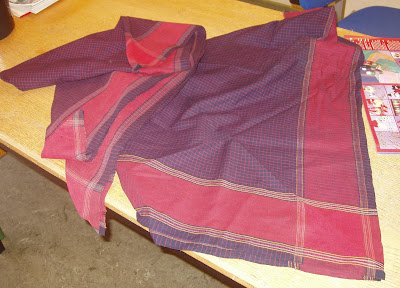 If you want to know how to tie it, here is a step by step process, as shown by the quilters - 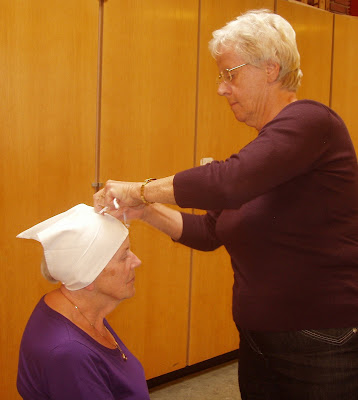 The cap makes the shape of the finished scarf - 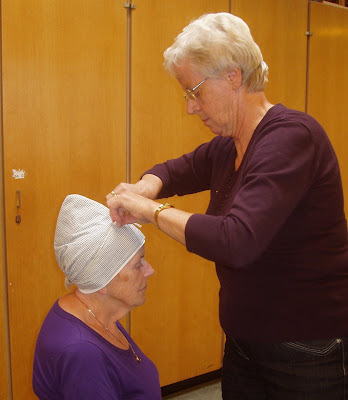 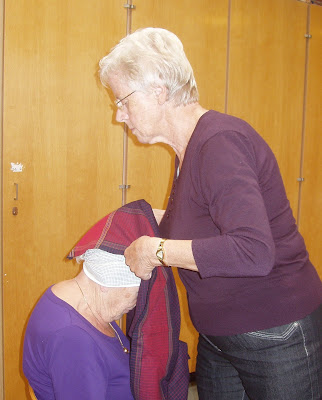 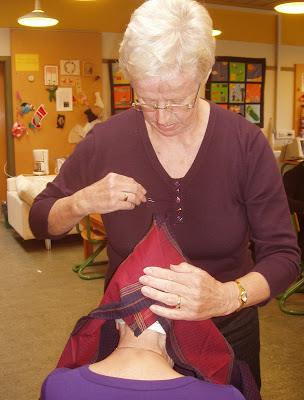 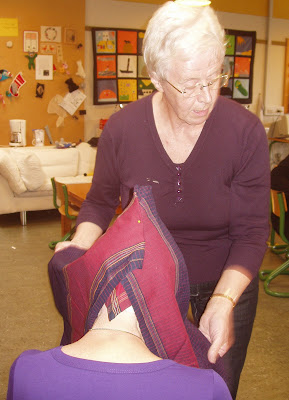 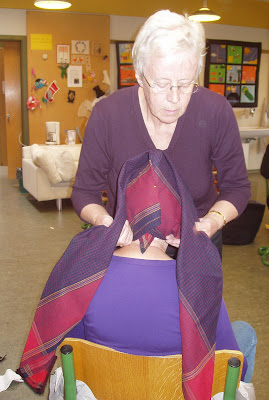 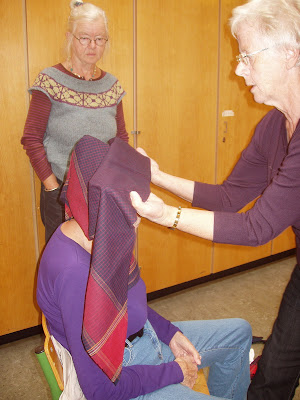 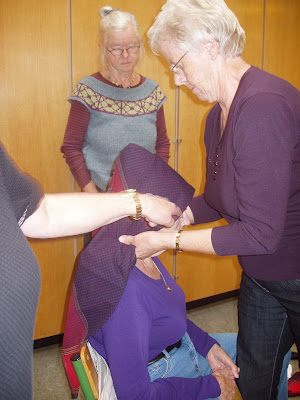 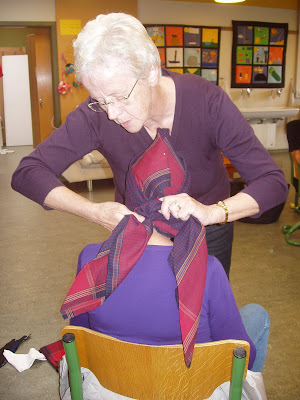 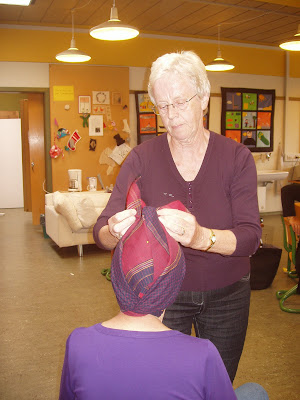 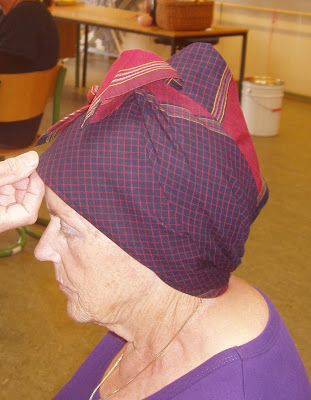 There are two different styles for the centre back pleats - 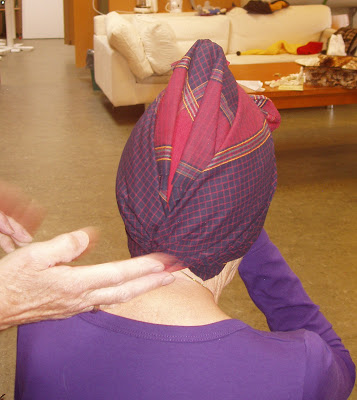 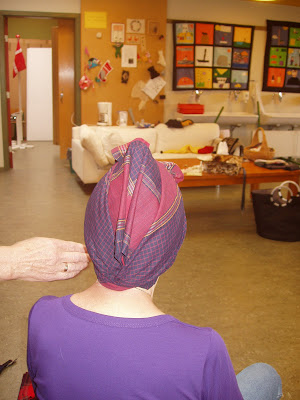 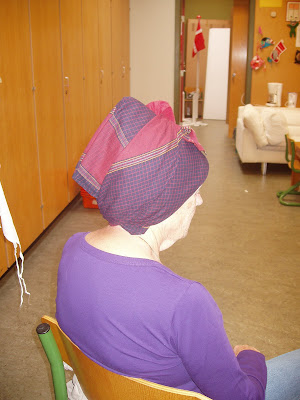 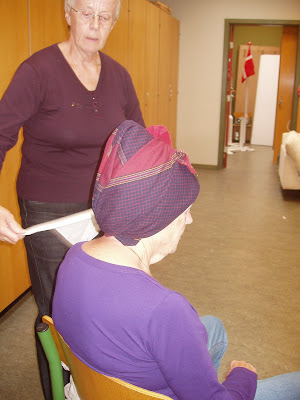 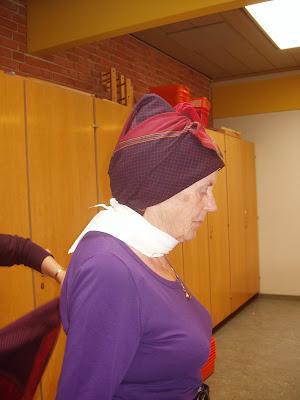 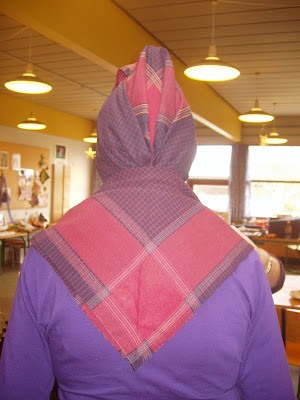 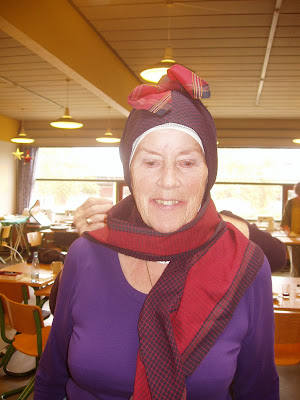 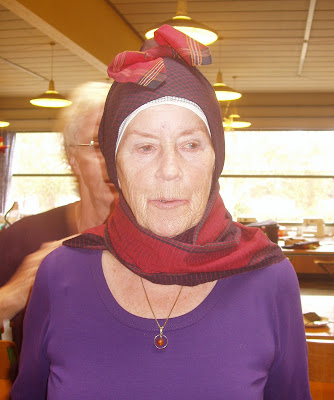 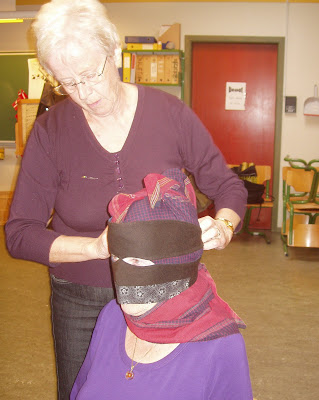 Women would recognise one another by the slightly different ways their scarves were tied! The lower half of the face protector should cover the chin, so this old one is a bit small. 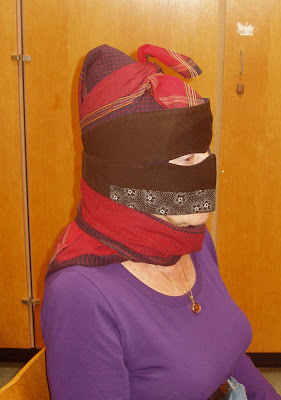 Elsebet, one of the quilt group, later showed me a traditional dress she was making for herself and another for her granddaughter. The petticoat has to be set into pleats, so the skirt is tied in a pleated bundle. The pleats would have been set by the heat from the stove over about a week, but she mentioned that nowadays the easiest method is to use the underfloor heating in the bathroom!
Posted by Susan Briscoe at 18:44