Around Fanø and the knitting festival

There was a knitting festival on the island this weekend, which had well over a thousand visitors. Apparently it is a popular place for festivals - there have been quilt festivals there and already Bente is planning a possible "Fanø Blue and White" textile festival perhaps for 2012... it is all in the very early stages (we had the idea on Saturday night!) It would be the perfect place for it.

The knitting festival included several exhibitions at places like the local library in Nordby and on the south of the island at Sønderho, the old school and other buildings had been turned into trader's halls. 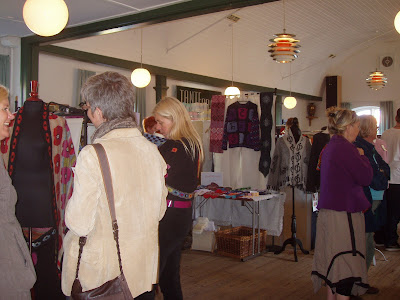 It was interesting to see how Danish knitting trends compare with the UK. The emphasis is on natural fibres and finer yarns, rather than the thick yarns and novelty fibre effects (fluffy, stringy or ribbon-like yarns knitted on big needles) that have been popular here for the last few years. There was a lot of hand dyed, space dyed and natural colour effects. There was plenty of sock knitting (we have that here too), mostly with German yarns. Popular styles included big, colourful shawls, but also smaller accessories with an emphasis on keeping warm stylishly. The higher VAT rate makes Danish shopping a bit more expensive than in the UK, but I bought a few sock yarns in unusual colours.

The large craft shop near Nordby, Kunstladen (Art Barn), on Sunday morning. People can fly the Danish flag during the daytime, and there are lots of them out. As it is almost the reverse of the St George's flag, the two might work together for an easy quilt in red and white prints. 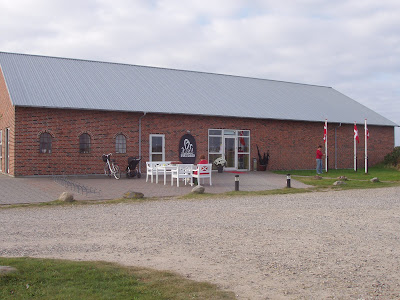 Sønderho has beautiful old houses, which retain their traditional exteriors, and many are thatched. While it looks idyllic, Bente told me that the weather can be very wild and cold in the winter, and parts of the island have been flooded by the North Sea several times. A lot of the houses have square-on-point windows in their front doors - you can just about see this in the first photo below. 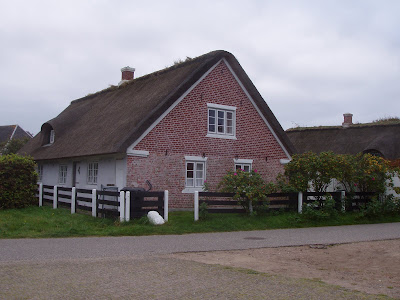 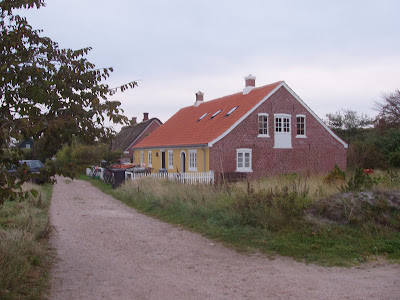 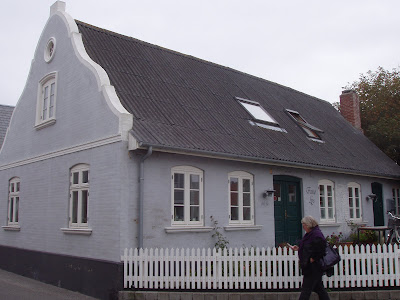 There is a tile museum there - in a pub! We had a delicious meal there on Saturday night. Bente and tiles - 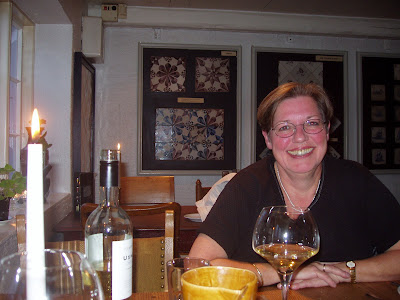 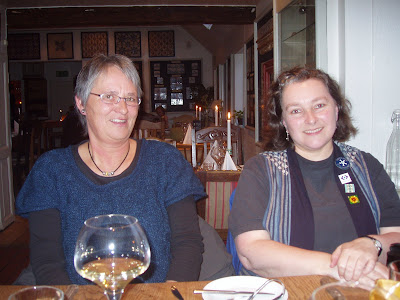 More tiles - although this pattern is very plain, it would make a good quilt block. 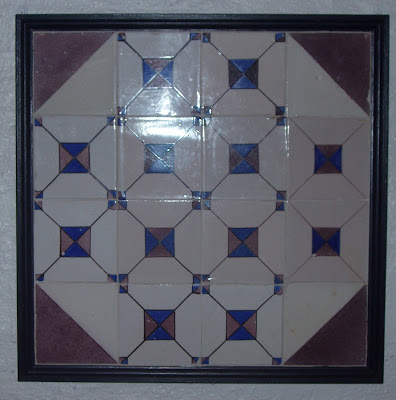 The islands men were traditionally sailors and merchant seamen and the tiles were brought back from the Netherlands as ballast in the ships, so there are a lot of them in the older houses, some designs rarer than others.

Geologically, Fanø is a huge sandbank, and the sea currents continue to pile up sand on its western shore, so the island keeps growing westwards! It is possible to drive on compacted sand between the dunes, to travel from one end of the island to the other. Just inland, there are dozens of newer summerhouses, and the islands population can increase x 10 during the summer months.

The centre of Nordby, where the ferry docks, also has a lot of interesting old houses and other buildings. The houses are long and low, aligned so the strong winter winds don't blow through them. This is the B & B where I stayed - 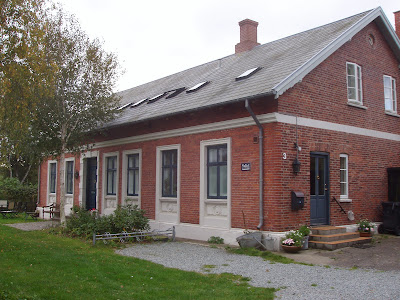 The house next door - 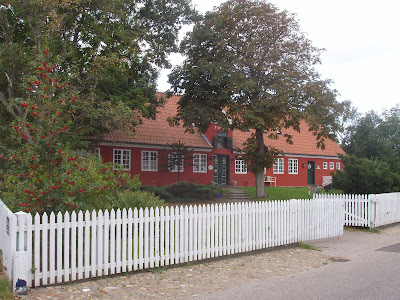 Karen, one of the quilters, lives in the house in the middle of the photo below with the pink gable end and her husband's pottery gallery is the smaller building in front. This is the centre of town, from the steps of the museum. 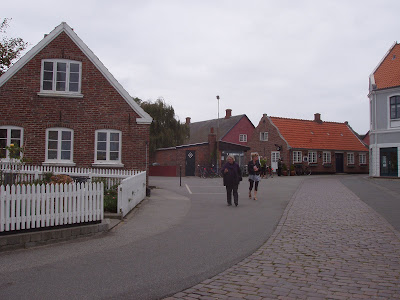 I had lunch with her when I arrived on Friday and got to see the inside of a traditional Fanø house, with antique tiles in the kitchen - 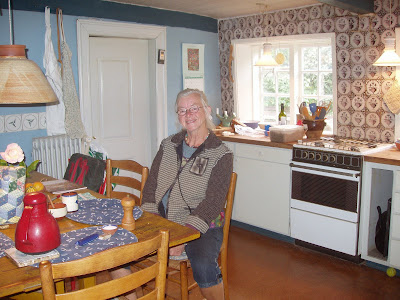 Karen's sewing room also had beautiful antique furniture. Like old Swedish furniture, the local taste seems to have been for painted furniture, including that special Scandinavian blue. Her home felt like a real artists' house (the pottery studio is straight through the kitchen door). 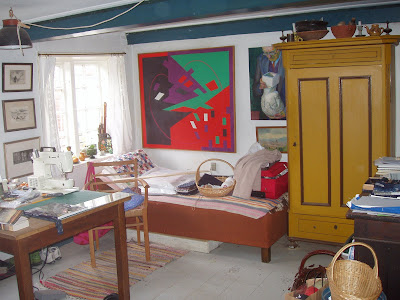 The camera's flash bounced off the back of the bicycles in the hall - it seems everyone cycles on the island, as it is so flat and it is obviously a great way to get around. 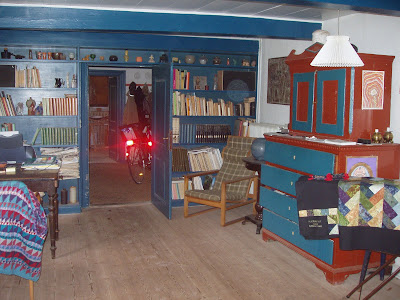 One of her husband's ceramic innovations is a kind of heat raditator distributor to go on top of a woodburning stove, giving out extra warmth - and looking very sculptural too! 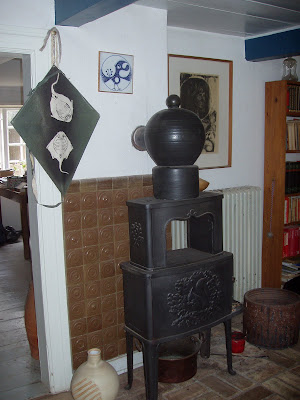 Finally, delicious Danish food - our lunches at the sashiko workshop - 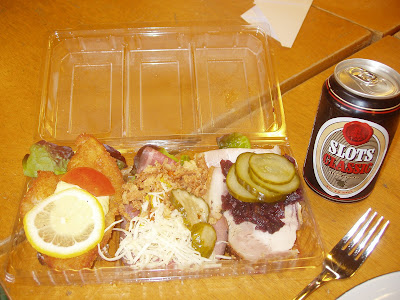 - and yesterday's lunch at the knitting festival - all very tasty and a visual feast too! 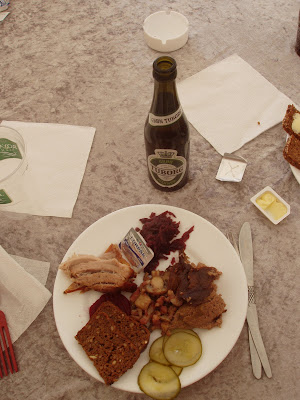 I do envy your trip to Denmark! Way back as a teenager I hitchhiked through Denmark staying at youth hostels en route.Very fond memories of the people,food and the general friendliness etc. Particularly fond memories of Sonderborg,Flensborg,Aarhus and of course wonderful Copenhagen!