It's that time of year when I usually get the needles out to knit some Christmas present ankle socks. The garter stitch top sock with an "improved" version of Elizabeth Zimmerman's Afterthought Heel (also known as a peasant heel) is easier to knit (and repair after wearing if necessary) than many more traditional designs. It is also a soft top sock - it won't cut your circulation off - but it will stay up. The garter stitch band is used sideways, so the first part of the knitting is like making a doll's scarf. I designed it for my dad to wear after his heart bypass. He has quite a few pairs now!

This is not a sock pattern as such - more of a recipe. If you don't know how to do things like grafting or an invisible cast on, there must be LOADS of places you can find a tutorial on the internet.

Select your sock wool (or cotton - with 25% nylon is best) and appropriate needles (most of the sock will be in a 2 x 2 rib, so you might want to go one needle size down). I used 2.5mm needles for 4ply wool. 100g will make two large socks. Bamboo needles are best - less tiring and so much easier to knit with. If you buy two sets of five, you will have enough to use as stitch holders (they have less tendency to slip out than metal needles). I always use five needles to knit a sock - much better than four (three holding + one knitting)and it makes the knitting much easier too.

You need two measurements - around the ball of the foot and the length of the foot (stand up to measure both of these, so your weight is on your feet, or the measurements might come out too small). Do this in inches or multiply the finished figure by 2.5 if you measured in metric (cm). Knit a sample swatch in plain stocking stitch with your chosen yarn & needles - 20 x 20 stitches will be enough. Measure the number of stitches over 2in (5cm) either way and make a note of these. Divide the stitches per row by two and multiply by the ball of foot measurement (in inches or converted "inches"). Make a note of that number *- it is the one of the two important measurements for this sock! - and round it up or down to the nearest number you can divide by 4. For an average adult sock (say European sizes 38 - 43 approx), the number will be somewhere between 60 - 80 stitches. From now on, make a note of everything you do - numbers of rows and stitches etc. - so you can use your notes to knit the second sock, and get a matching pair.

Use an invisible cast on method to cast on a suitable number of stitches - I use 20 for 4 ply and 12 for double knitting (dk - similar to a light sport weight), enough for a deep garter stitch top. Leave enough yarn loose at the start to use for your grafting. The fewer yarn joins you can get in your sock, the better. Knit garter stitch until you have one less garter stitch ridge than the number of stitches you need to knit around the foot and ankle (number marked * above). 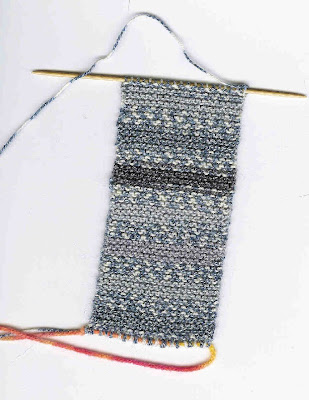 Graft the ends together - the end where you are knitting and the end where you are started (grafting is done with a bodkin - it is also known as Kitchener Stitch - this video looks like a good demo - you will graft with the same yarn as you are knitting with however). I always make sure my grafting ends up where my knitting has ended, i.e. the two yarn strands are pointing downwards when the sock is on, so I can sew in the grafting yarn neatly at the end and my knitting yarn is ready to use for the rest of the sock, without having to rejoin the yarn.

Pick up one stitch per garter stitch ridge. The finished number of stitches should divide by four. If you are one stitch more than your * number, knit two together once on the first round; if one stitch less, make one extra! Knit down the sock in 2 x 2 rib, until you are where you want to start the heel. This rib is the secret to the sock staying up. Knit plain stocking stitch, and it won't! 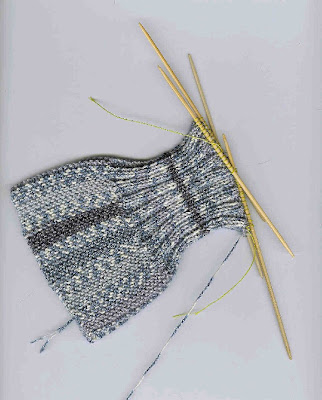 The heel I use is a variation on Elizabeth Zimmerman's Afterthought Heel (if you don't know her work, check out some of her knitting books - her "Knitter's Almanac" is one of those craft books that is also an enjoyable read and she is a wonderful writer). She recommends using two thirds of the stitches to make the heel (which makes it too large). Other writers recommend half (too small). Using three fifths of the stitches is about right. So divide your number of stitches by five and multiply by three, rounding up or down to the nearest number divisible by four plus an extra two, so your heel sits symmetrically among the rib. Knit these stitches onto waste yarn, go back and knit the main yarn over the waste yarn, and continue knitting the sock - knit the stitches that start at the waste yarn in plain stocking stitch, as these will be under the foot, and knit the other stitches in 2 x 2 rib, as before. The rib helps the sock fit the foot nicely. 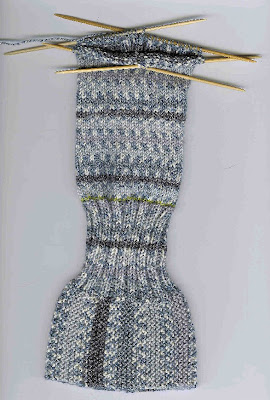 Continue knitting down the foot until you come to where the toe needs to start, about an inch to an inch and a half short of the total foot measurement, depending on how large the sock is. Working out where to begin the toe is a bit tricky, so for your first sock, try the idea in the next step and work out your sock sole measurement from that. But I am showing how to knit the toe first this time, because the "afterthought heel" is knitted just like another toe!

Divide the stitches so you have a front and back of the sock - same numbers in each. Shape the toe by knitting two stitches together at each side of the toe on each round. In other words, you decrease two stitches on each side for each round. If you are a clever knitter, you will know how to make those decrease stitches slope to the right (knit two together) and two the left (slip a stitch, knit a stich, pass the slipped stitch over). Continue until you have about eight stitches remaining front and back, break off the yarn and graft the toe together. Compared with the lumpy toes on manufactured socks, these are so much more comfy to wear. This kind of flat toe, rather than the spiral toe found on many traditional socks, stops the sock twisting when you wear it. And if the toe wears out, it is easy to unravel and reknit. 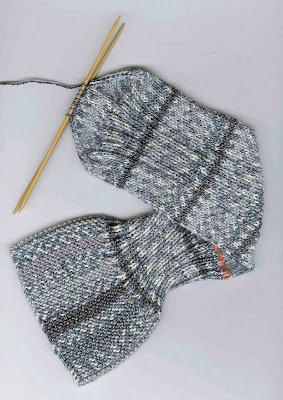 But working out if the foot is long enough isn't straightforward. Rather than messing around with difficult maths, if you knit the heel of the first sock before finishing off the toe, you can (carefully) try the sock on and check the length before knitting the toe. Easy and no maths required.

So for the first sock -

Once a decent length of foot is knitted, transfer the stitches held by the loops of waste yarn onto two needles. If the ends of the gap look a bit loopy, pick up a stitch or two there on your first heel round, when you will be knitting without any decreases, so there isn't a holey gap at the corners of the heel. You need the same number of stitches on the "front" and "back" of the heel. Knit the heel using the same decreases as the toe (above). It seems strange, but it works! So the bottom corner of the heel isn't too narrow, I normally graft the remaining stitches together when there are a few more stitches left than for the toe - say 12 instead of 8. 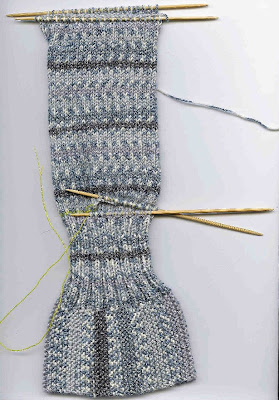 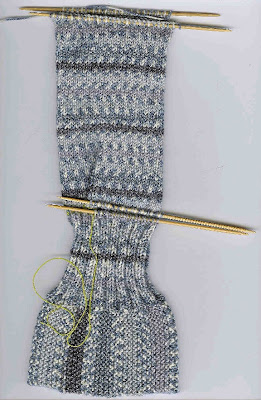 But, don't you have to break off the yarn (or have two balls of yarn) if you are going to knit the heel first? No - I pull the yarn for the heel from the centre of the ball instead. Or if you are working with two 50g balls, use the second ball for the heel on the first sock. When you finish knitting, keep any left over yarn in case you need to repair a worn out heel or toe - which you can do by simply unravelling them and reknitting. While a toe can be reknitted on almost any handknitted sock, Dutch and French heels can't.

Somehow I don't seem to have a picture of these socks finished! My mum has got them, so maybe she would model them for a photo?

A different sock, in double knitting wool (dk) with the heel done following the traditional peasant heel i.e. only half the stitches. Definitely too small for a decent heel. 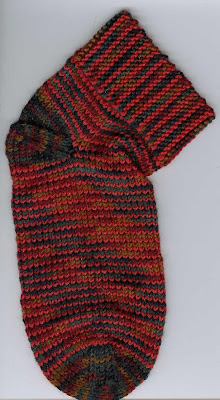 Oh No! Those socks look great! Not another thing I want to do!?

You have so many strings to your bow Susan!