On Friday, I flew from Manchester to Billund, Denmark, and crossed over to the island of Fanø on the passenger ferry from Esbjerg - 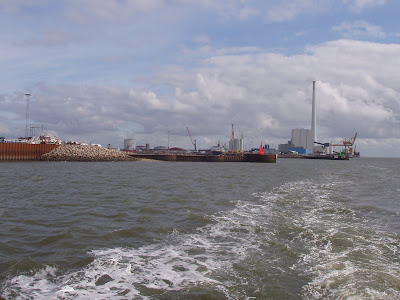 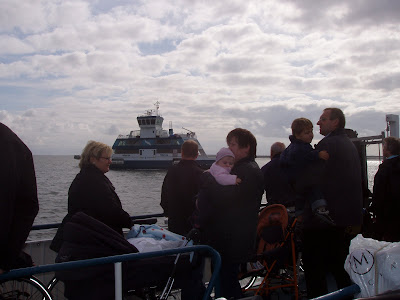 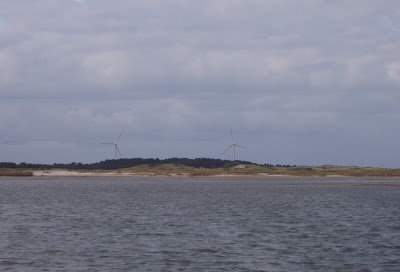 Bente Eiler, the Danish quilt guild's International Rep, invited me to give a sashiko talk and workshop on the island (there is also going to be a Danish translation of my "Plum and Moon" and "Tai" bags in their guild magazine soon).

As my check-in baggage was full of sashiko old and new, and workshop materials, I packed all my personal stuff in my backpack from "FabulousFat Quarter Bags" and it had its toughest "road test" yet. I also used the little ticket pocket for my boarding pass and passport, which kept it handy. When I designed the ticket pocket, I thought that making it free from any metal parts would mean I could wear it through airline X-ray security - after all, it is a pocket! - but I still had to put it in the tray with my other stuff. The other bag in the photo is the satchel from "21 Terrific Patchwork Bags", which I took as my handbag. When I boarded the plane at Manchester, a tiny Dornier 328 - 100 (twin propellers!), my backpack went in with the valet luggage and was fine. 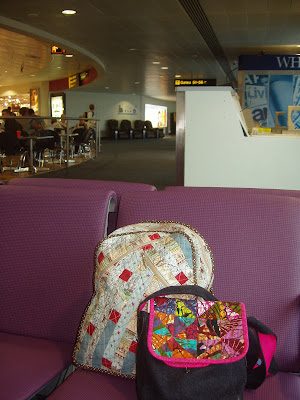 The workshop and talk were in the sewing room at the local school, so we had plenty of space to spread out. The quilters have promised me photos of their finished furoshiki and other stitching, so I'm looking forward to seeing those soon! 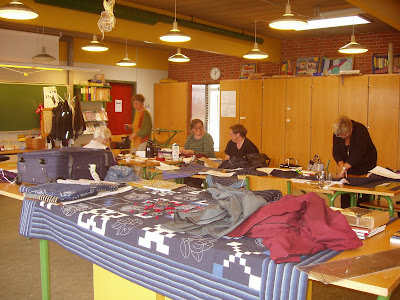 They are already keen on sashiko. Here are some coasters from patterns in my "Ultimate Sashiko Sourcebook" made by Karen. 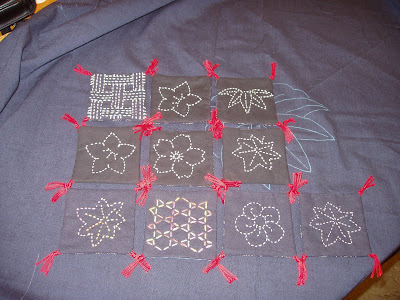 I took so many photos, I'll have to make several blog posts to do them justice! Fanø is a unique place with a fascinating history, which continues to influence island life - I'll make separate posts on the architecture, the island and their traditional costumes in the next few days. It is a place which as attracted artists and craftspeople and today has many galleries and craft shops among the old houses.
Posted by Susan Briscoe at 10:06