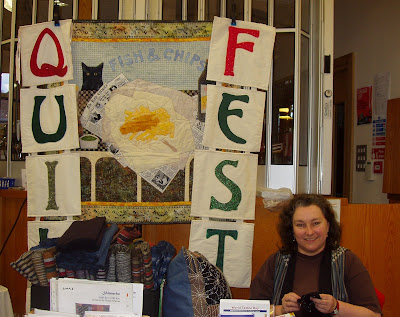 The annual Nantwich Fabric Sale seemed busier than ever this year - I'm sure the door raffle ticket numbers reached over 700. There wasn't much time for a photo of my display. I had the Quiltfest banners and flyers with me so I could promote February's exhibition too. "Fish and Chips" is going to be displayed for the first half of the month at the Royal International Pavilion, along with DeAnne Hartwell-Jones's quilts, as part of the "Made in Wales" section of the exhibition.

Because my stand backed onto the bar entrance, I couldn't use the longer quilt stand this year. Luckily we had packed the two lighting stands, so the smaller pieces I displayed could be grouped into two shorter sections. The projects below are all from "Japanese Taupe Quilt Blocks" (just spotted that the Australian and USA editions have slightly different titles - "125 Japanese Quilt Blocks" and "Japanese Taupe Quilts" respectively - so confusing for me!) 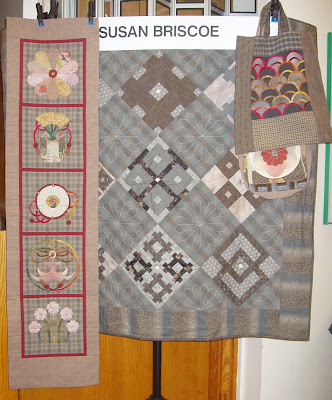 I spotted a few must have items for various projects, including a super Paisley print with a "Turkey Red" coloured background and two Moda Jelly Rolls I was after - "Twiggy" and "Arcadia". I used the "Twiggy" range for the "Retro Revival" blocks in the forthcoming "130 Little Quilt Blocks" ("130 Mini Quilt Blocks" USA) - from a layer cake of 10in squares - and wanted a Jelly Roll of the same fabrics for a frame quilt project, using up the leftover layer cake pieces. "Arcadia" was used for the new version of the "Masu" quilt which will be included in "Japanese Quilt Inspirations" (due out in May 2011) and I want to make a second version with the Jelly Roll strips in a slightly different sequence and be able to use the fabric for another frame project. There's two "Arcadia" Honey Buns, a charm pack and a layer cake in my stash too, bought when I thought I might have enough time to make a third version of another quilt from the same book. I guess that could be described as "having your layer cake and eating it"...

It feels like it was a long day but very enjoyable, as I meet so many quilters I know at this one day event. Roll on next year!
Posted by Susan Briscoe at 19:24