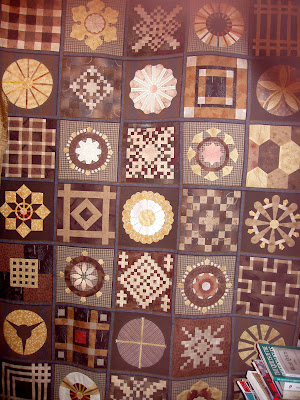 I finished assembling the taupes sampler with the woven sashing effect this afternoon and will put it on my display at Exeter this weekend. So far it is just the centre of the quilt top, without the wider border or any quilting. The woven effect was achieved with strips cut from one of the Japanese tsumugi cotton stripes. I had two almost identical brown fabrics, one with slightly wider stripes which I would have liked to use but... there wasn't enough. I could only use the narrower one. So the finished strips are 3/4in wide, rather than 1 1/4in in. This is narrower than I really wanted but there was no other way around it.

The stripe has 3 colours - dark brown, mid brown and a yellow brown. I cut the strips with the mid brown in the centre, which will hopefully give a slightly three dimensional effect to the sashing once it is quilted. Before I cut the pieces, I guessed the yellow brown should have been in the middle of the strip, but I tried framing a narrow strip and could see the light brown was more convincing in the centre. 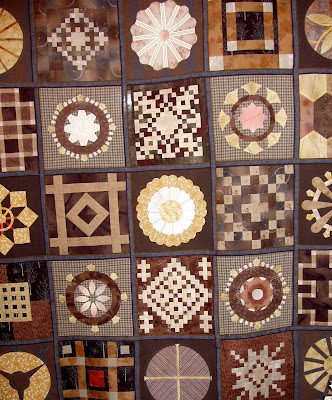 I'm not sure how I am going to make the outer border. There's the option of making something incorporating the wider version of the sashing stripe, but it needs a lighter narrow border in between the sashing and the main border if I am going to do this. I wish I had more of the yellow ochre fabrics used in the blocks, but there's only enough left for a pieced border. 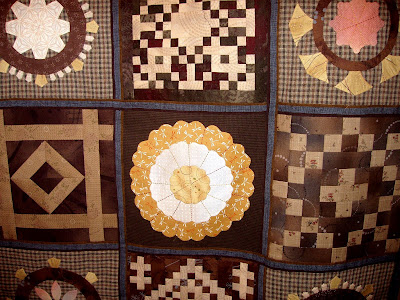 I still have more of the tsumugi used for the circular pine bough crest below, which has a subtle multicoloured single thread stripe and a brown background. That's another possibility. 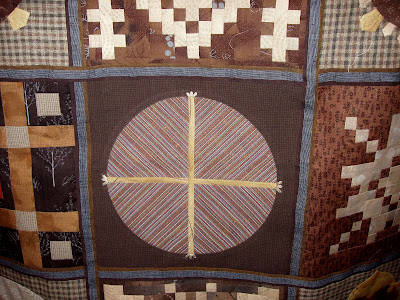 Susan - you inspire me! Yours is one gorgeous quilt. Now that I own your newest book and when I finish my guild's Japanese BOM from your previous book you can be sure I'm heading straight into this one next. I so wish I could attend your classes but it is such a long and tedious swim across the pond.

Thanks for the compliments on the quilt! This warm taupe colourway (like the colours in Hakone parquetry) was one I really wanted to include in the book - like the cooler taupe blocks with hints of blue and many of the applique blocks with floral/foliage motifs, I planned them to go together from the start.

I'm looking forward to seeing the BOM quilts made from the first book - hope there will be more reader quilts coming soon from the second. Ann Hill's quilt (photo posted last Saturday) is the first I've seen.