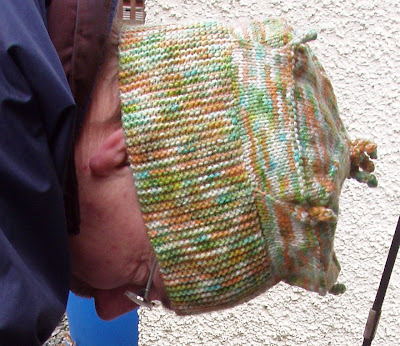 Busy busy with more Quiltfest stuff today, but taking a few minutes out to post about some hats I made in the autumn. So far I only have photos of one of the hats, but I'll get pics of the other one soon - it was a similar construction. I took the photos a fortnight ago, when Glyn was working on the car and it was cold.

The yarn is a gorgeous hand dyed merino I got from a craft shop in Great Ayton back in August. They were selling proper local handcrafts - yarns, prints, ceramics, woodturning etc. etc. - and at the time they were in a shop under the Captain Cook schoolhouse museum, but were hoping to take up residence in the library in the new year. Anyway, I got more yarn there in November (I'll post details of the spinner/dyer later - I've kept the labels). There were 2 hanks of this merino, 50g in each, and the other was red, hot pinks, purples and white. I wasn't sure if I'd have enough to knit the design I wanted, so I knitted the red/purple one first, without the little 'twiggy' points at the corners, but with the twig tassel in the middle. It is about an aran weight, so I used 4.5 mm needles for the main part of the knitting.

I cast on invisibly (i.e. to leave open loops for grafting later) on 3.5mm needles and knitted 99 garter stitch ridges, then grafted the ends together to make a loop and the 100th garter stitch ridge. Without breaking off the yarn, I picked up one stitch per ridge and started knitting towards the edge of the hat brim. I placed markers at every 20th stitch and after a couple of rows started increasing once after each marker, making the hat into a slightly pointed pentagon shape.

Years ago, I made Glyn a hat with proper 3-D points, but I knew there wouldn't be enough yarn to do that this time, so the pentagon with 'twigs' was a compromise. It's still quite a pointy shape though. Once I'd knitted a couple of inches or so up from the garter stitch band, in stocking stitch and in the round, I worked a purl row. That's where I added the 'twigs' - at each point of the pentagon, cast on a few stitches (I think I did 9) and immediately cast them off again knitwise, and continue purling to the next twig point. The 'twigs' have a curve to them, but look good/funny LOL. Purling that round turns the knitting and gives the hat a more pronounced edge. I purled at this point on the red/purple hat too, but didn't add the twigs, because I thought I might not have quite enough yarn. 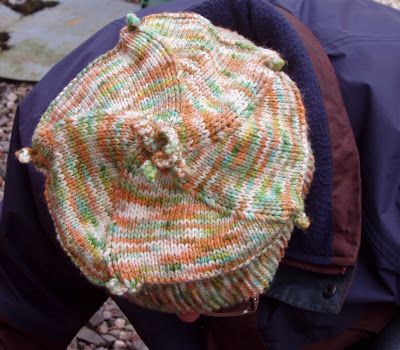 Once over the purled ridge, I started to decrease for the crown, again at the same five places in the round. I did a left slanting decrease, by slipping a stitch and passing it over, so the decreases spiral clockwise. On the pink/purple hat I did the decreases by knitting two together, so it spiraled to the right. Because the increase stitches before the purled ridge were picked up after the markers on each round, the increases slant to the right, so on the green hat, the direction of the slant/spiral reverses as it goes over the purled ridge, like this >. On the red/purple hat, it goes in the same direction, like this /. A small but interesting detail. I switched from my 40cm circular needle onto a set of six needles (five in the work and one knitting) once the crown stitches started to decrease significantly. Once I was down to 5 stitches, I repeated the 'twig' points in my cast off round. 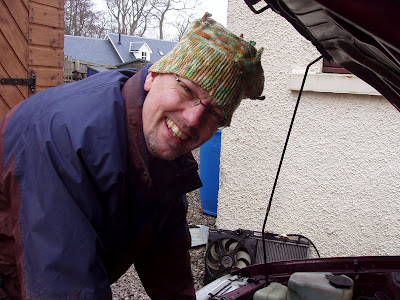 The wide garter stitch band at the beginning is just as stretchy as a 2 x 2 rib and keeps its shape well, so long as you knit it on smaller needles, just like you would for a rib. It's deep enough to pull down over your ears when its cold too! Hats are a good project when you want something quick and portable :-)
Posted by Susan Briscoe at 11:11