Time and Time Again - from Australia 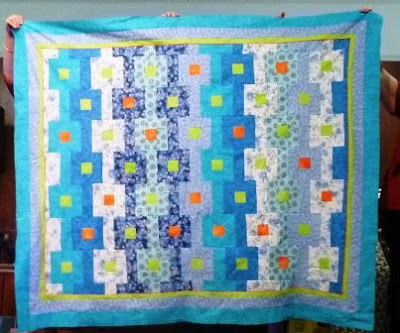 Joanne Krause from the Patchwork and Quilters' Guild in Melbourne, Australia, sent me photos of their recent workshop based on my 'Time and Again' quilt. Heather Shepherd, who was one of my hosts in Melbourne during my March 2011 trip, was coordinator and Joanne says my design was well appreciated. The orange and lime central squares in the one above really pop, don't they? So fresh and summery. I was struck by the lovely sunny fabrics the Melbourne quilters used when I taught there last year - we did Super Strips. I wonder if any of the same quilters did 'Time and Time Again'*.

It's lovely to see these variations on the original design, like the one at the top which has extra columns, or these below with variations on the borders, because I'm about to teach this design as a workshop for the first time at The Royal Hotel on 9th February. More summer colours in the quilts below - the blues and greens are calm and cool (it must be pretty warm over in Melbourne right now).

It works well in so many different fabrics - the aubergine purple and taupes combination below is one of my favourites, and it's great to see how lovely it looks in pastel prints too (are those 1930s repro fabrics on the far left of the pic below? That would work well... expecially as this design can have a big nostalgia factor if you use fabrics with special memories for the central squares). 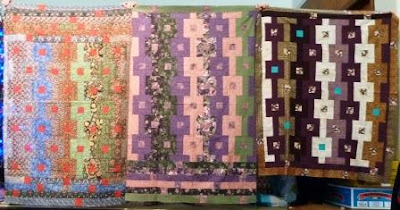 *I've renamed the original 'Time and Again' quilt 'Time and Time Again' for the workshop version - I think Fiona at the Royal originally called it that and I thought it was very appropriate for the workshop, considering the number of times the quilt will be made in endless fabric variations!

I'm starting a new version of it myself, using a Robert Kaufman batik roll (saltdye, i.e. mottled batiks rather than waxed) and I'm hoping I have enough of a very vivid large scale Japanese print for the centre squares. It's the kind of print that has a lot of variety, and it has nice memories, as I found it in a bargain basket in Tokyo nearly 10 years ago - it will be good to use it at last.

Hope these Australian quilts have inspired your colour palette today...
Posted by Susan Briscoe at 10:10

Looking forward to the workshops - some great variations, Cant wait to see what we produce too.