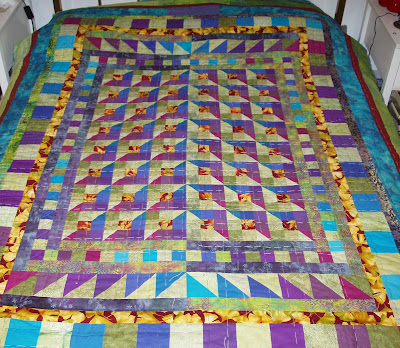 I started this quilt a long time ago. The central Split Nine Patch section was made for Wrexham Quilting Circle's first exhibition challenge - does anyone know which year that was? I think it may have been 2001, because some of those plain fabrics made their way into my Hoffman Challenge entry that year - although that could mean that I made this top first, in 2000.

It's too nice not to finish, and was already layered, tacked and partly quilted. The wadding is Hobbs Polydown in grey, which hasn't been made since about 2005 (a shame, because it was more useful than the black version). I'm quilting it with Stef Francis medium mercerised cottons and still have enough of those to finish it. My target now is to get it done for the National Quilt Championships in June. It would make a nice quilt pattern too.
Posted by Susan Briscoe at 15:54