What you can REALLY squeeze out of a fat quarter... 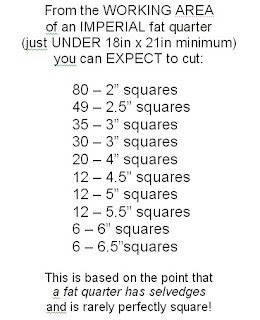 A rather optimistic version of how many squares can be cut from a fat quarter has been doing the rounds on Facebook today, based on an Imperial fat quarter rather than a metric one.  I'm sure most of us know that there is rarely 18in x 22in working area in a fat quarter - even if the fabric is 44in wide (and most quilting fabrics seem to be 42 1/2in - 43in wide), you normally can't use the tigher selvedge and most fat quarters aren't perfectly square on the cut edges, even when rotary cut.  So to save disappointment, the table above gives a more realistic number of squares.

Thanks Susan, as I've learned to my frustration, FQs vary considerably in both size and shape!