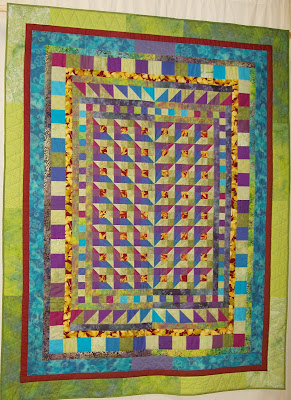 I finished checking the instructions and diagrams for 'Garden Party' today and it will be appearing in Popular Patchwork in late spring (not quite sure which issue yet!)  This is a quilt that sat for far too long as a UFO.  I think it really was a UFO - UnFinished Object - rather than a WIP - Work In Progress - because for years I didn't do a stitch on it.

The central panel was started for Wrexham Quilting Circle's first exhibition challenge.  I'm not sure when that was, but I suspect it could have been around 2000.  The theme was 'Split Nine Patch' and I am sure the 41/2in finished block size was the one we were all making. The block centre leaf fabric was a Hoffman print with maple leaves and I had two fat quarters from the range - one with the maple leaves and one with ginko leaves, but in the same colourway.   Those, along with most of the other fabrics, came from Dot Sherlock's Quilter's Needs travelling quilt shop.  I'm sure Dot would probably still recognise them!  I had been collecting greens for a green quilt I still haven't made (although I did make the centre as a small wallhanging), so that probably dates the quilt to around 2000 as well.  The eight plain fuchsia/purple/blue/turquoise fat quarters came as a bundle. Doing the colour shading sequences was rather absorbing.  Apart from the turquoise Japanese kamon print in the wide, plain border, which was an early Euro Japan Links fabric, everything else was bought as a fat quarter, which is how I mostly shopped for fabrics back then.  It also mixes batiks in with the prints and plains. Once I started adding borders, I liked the effect so added some more - one reason I didn't finish in time for the challenge. The 'colour split' borders, where the border is made half and half with two different fabrics, was a simple strategy to eke out fat quarters. 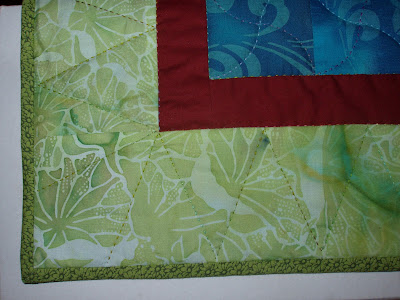 I started hand quilting it in big stitch, using hand dyed cotton similar to a #12 perle, but it got put away when I'd only done a little.  Although I thought it would look interesting before I started quilting, I wasn't sure about the effect of using big stitch to quilt in the ditch once I'd done a few borders, but the main problem was the seam allowances on the triangle squares.  Remember rules like 'always press towards the dark fabric'?  I stuck to it throughout the triangle squares in the centre blocks, when I should have pressed them in opposite directions, so they'd 'sit' better at the block intersections - that's a point I revised for the instructions, so the seam allowances won't make such bulky joins. 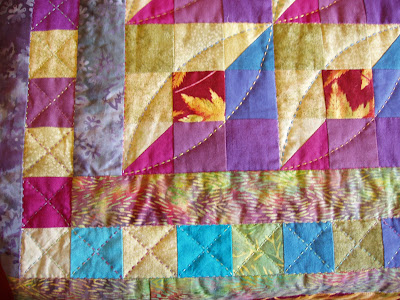 Luckily I'd used a nice wadding for hand quilting - Hobbs Polydown - so it wasn't too hard to quilt when I returned to it this year (Glyn spotted it in the UFO pile and said I should finish it).  It was one of the last grey polydown waddings I had.  I wish Hobbs would reissue the grey wadding, instead of only having white and black!  I finished the quilt in time for the theme category at Sandown Park last year and it was also entered into the Great Northern Quilt Show at Harrogate.

Now I've recreated the diagrams etc. for the instructions, I enjoyed it so much, I think I'll do a 25% enlarged pattern for a jelly roll.  It has some similarities to nineteenth century British medallion quilts, so I'd like to remake it in reproduction prints.


I joined in May 2001 and everyone was finishing off one of Stella Hough's challenges, borders in different techniques.    For the first one I did, in 2002, she sold us 3 FQs of leafy green fabrics, and we could add 3 other fabrics of our own, and make anything we wanted.    I did a hexagons (surprise surprise) cushion... The next two years were 2 colours only + black or white, and a country, both picked at random, I can't remember which came first!   Don't know where they fit into the Challenge Calendar, though.      The broken nine patch must have been before 2001.
I did the leafy green challenge too - it was on the theme of 'gardens' (below, top).  This time I kept it much smaller, so I'd get it finished! After it was included in Peaceful Heart's exhibition in Yuza, the challenge had a spinoff with three Japanese quilts, which were shown at Quiltfest in 2006.  The quilts are (from top) 'Teien - a garden' by Keiko Hori, 'My Favourite Garden' by Keiko Abe and 'My Mind Garden' by Reiko Domon. 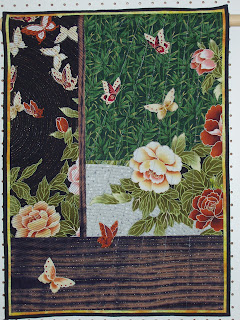 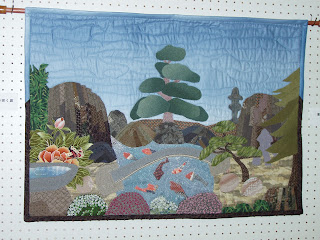 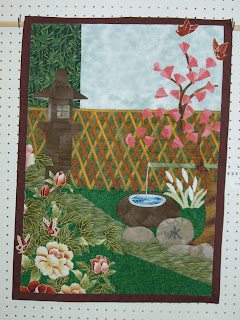 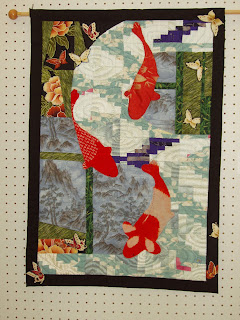 This is quite an interesting quilt with a simple block and many shades to discover, I love it!