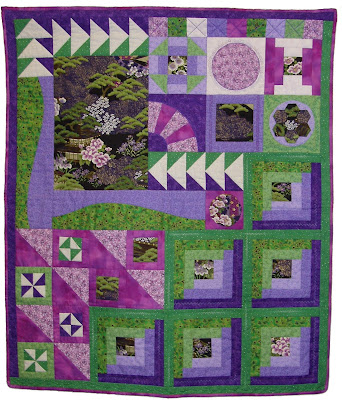 Two quilts I am very happy to be able to include at Quiltfest are this splendid purple and green version of my one-of-a-kind sampler by Pat Morris (above) and Japanese Circles and Squares by Dot Sherlock (below). 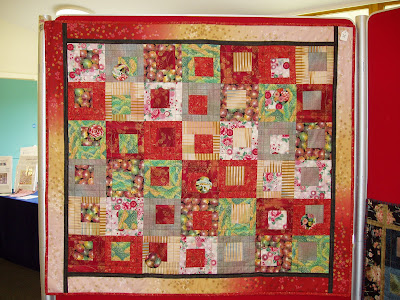 You may remember the sampler from Popular Patchwork magazine a number of years ago, but it was originally devised as a way of teaching various techniques and blocks when I taught a weekly p & q class near Wrexham. I met Pat and several other quilters through that class and we have stayed in touch via Wrexham Quilting Circle.  Pat's quilt was therefore one of the first of these samplers made and I think I like it better than my original in red and black!  The tea garden (chayatsuji) print in the feature panel was a print from Kona Bay, not one of their panel prints but an all over design. A photo of this quilt was included in both the Popular Patchwork instructions and in 'Cempendium of Quilting Techniques' (published as '200 Quilting Tips, Techniques and Trade Secrets' in the USA).  Pat is also loaning her colourful version of the table runner from 'Japanese Taupe Quilt Blocks'.

Dot's quilt is one I think of as her 'red' Japanese Circles and Squares but she calls it the 'fruit salad' colourway.  It was the second one she made after a workshop at Dyffryn Clwyd Quilters at Ruthin - she told me the pattern was so addicitive, she made two more quilts the following day :-)  Some of the fabrics are Japanese prints but, as is often the case with this design, only about 50%, and there's an interesting shaded print stripe in there among others.  The border was a Quilt Gate ombre print with scattered cherry blossoms. It's one of those very useful fabrics that I've used again and again, including for the sashing and the outer border on the Kamon crest sampler from 'Japanese Quilt Blocks to Mix and Match'.  I haven't decided yet if this will be featured at Quiltfest or not - it's on my shortlist.  Dot is, of course, the quilter behind Quilter's Needs, the travelling quilt shop that will be familiar to quilters across North Wales and Cheshire. You can catch up with her (and me) at the Nantwich Fabric Sale at Nantwich Civic Hall next Sunday. 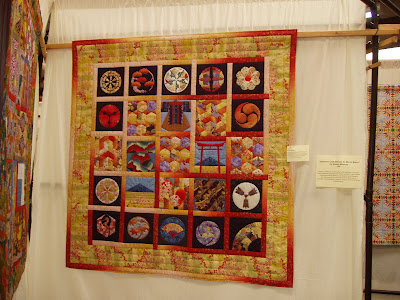 Di Abram will be loaning the wallhanging she made for the Inspiration Gallery in 'Japanese Quilt Blocks' - if you have the book, it's the one with three blocks linked as a banner, with the 'moon and cloud' kamon reduced in size in a final 'pennant' section at the bottom (see below).  It uses bonded applique perfectly outlined with gold metallic thread in Di's signature style.  Thanks very much to Di for sending me a photo today! 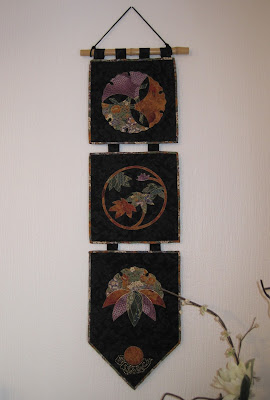 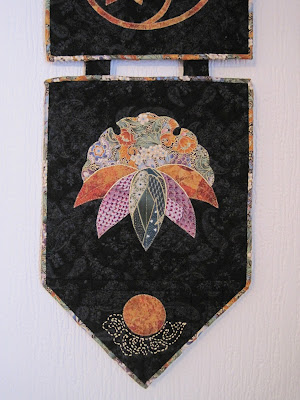 I love the purple and green.