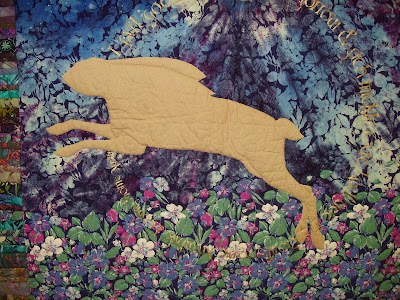 As my exhibition at Quiltfest was intended as a retrospective, perhaps even more appropriate now as life has changed a lot since we first planned it :-), I included some of my earliest quilts.  My very first quilt wasn't there (it's here on the bed, doing what it was made for!), but the second quilt I started - the third I finished - was doing duty as the cover for the stewards' table and two others made in the early 1990s and first shown at the Clwyd Open Art exhibitions in 1993 and 1995 were included.  These are 'The Fabled Hare' (1995) and 'Dream - Mt Chokai and the Shonai Plain' (1993).

Val Shields said the hare quilt was the first time she saw a quilt in that mainstream art exhibition.  Maybe she missed the 1993 show, because 'Dream' was the first one I entered. Anyway, I'll write about them here in reverse order!  At that time, I hadn't seen many modern UK quilts, apart from some of Deirdre Amsden's 'Colourwash' series that toured to Aberystwyth Arts Centre c1987 as part of a contemporary British Textiles show.  My main influences then were Japanese and Australian quilts.  I had two books by Dianne Finnegan and a stack of Japanese books and magazines.  My sewing machine didn't have a quarter inch or walking foot and I didn't know about quilt shops. That was it.

Because I didn't drive, my fabric buying opportunities were limited mainly to Mold market and Chester, where I used to check out Liberty's sale section every few weeks.  On the market, I could get Liberty and Laura Ashley seconds, which is mostly what I used in this quilt, and Just Sew in Mold also had cotton dressmaking (and a few patchwork) fabrics too.  I wanted to use a lot of blues and purples in this, but didn't have many in my small stash, so I tie dyed and overdyed other fabrics with blue and purple.  The moon fabric was also a tie dye.  Perhaps having to eke out and alter fabrics with dyes and paints in those days has influenced me later - while dyeing is fun, I love hunting out just the right fabric for a project from commercial ranges and other people's hand dyes. 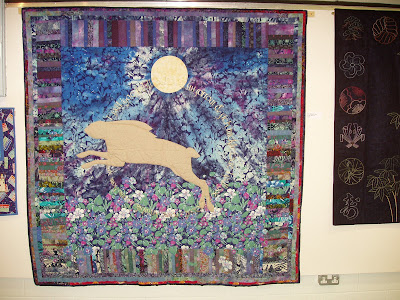 The subject for 'The Fabled Hare' is from a song sequence written by Maddy Prior, included in her album 'Year'.  I heard it for the first time when Maddy performed at Theatr Clwyd.  The opening words are painted in gold to make the circle for the hare - click the lyrics for a song link -

I just drew two circles and started painting the words with a signwriter's lettering pencil (brush), reducing them in size gradually so I could fit them all in.  It is a Scottish borders witch's spell for transformation, and I imagined the hare coming out of the other side of the spell circle under a harvest moon.  The hare, while similar to some of the leaping hare images in Kit William's 'Masquerade', was actually based on a pewter brooch.  Its body and the moon are filled with Celtic spirals, and the hare has an extra layer of wadding.  The applique isn't great because I didn't know how to needleturn then.  As well as over dyeing many fabrics in the border, I also tie dyed the Liberty 'second' I used for the night sky - it is the same print as the floral pattern in the bottom third, but with only the navy background printed.  It was hand quilted and the edges are turned inwards and butted over the wadding, like traditional British quilts, rather than having a binding. 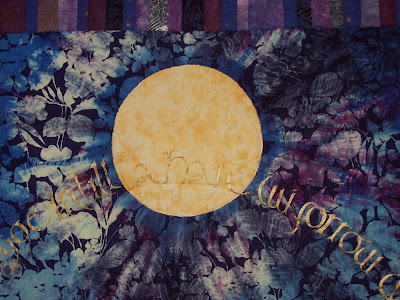 The earlier quilt included a lot of fabric bought when I was working in Japan.  The main part of the kimono is bingo kasuri, a machine woven double ikat used for traditional mompe work trousers.  I bought a whole roll of it, enough for one pair, from Yuza Kasuriya, round the corner from my house in Yamagata Prefecture.  The mountain fabric, the background to the red yama (mountain) kanji, the Utamaro print handkerchief and the seigaiha wave pattern on the side borders were all bought either there or in Sakata, while the metallic brocade across the top of the kimono came from a Kyoto goods sale at Shimizuya department store in Sakata.  The floral background and the wide red raw silk strip across the bottom (to suggest an obi) were purchased on my trip to Singapore.  When I first came back from Japan, life in the UK seemed rather alien and I really missed my life in Yuza, so the quilt is really about that. 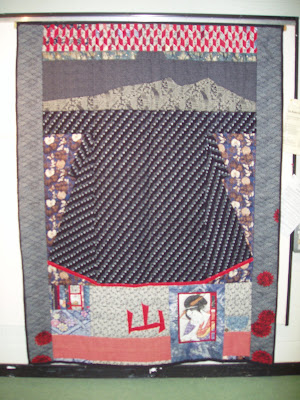 The top border was my first attempt at Seminole patchwork, which I'd seen in Japan.  I don't think I had a rotary cutter and quilter's ruler when I made this, so I used the long bamboo ruler I had for marking kimono instead, marked the lines and cut them with scissors.  I think the width of the strips in that top section are probably the width of a Helix plastic ruler! 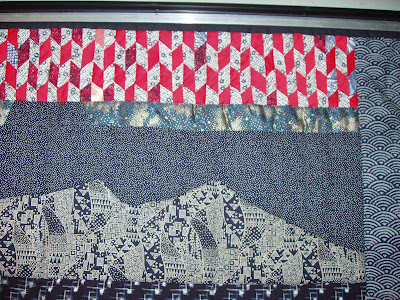 My neighbours had the ukiyo-e print handkerchiefs in their drapery shop (the same shop where I learned how to sew kimono).  I thought these would make lovely panels in quilts, although they were very fine and I think I backed it with thin interfacing.  I still haven't used the others!  Although I managed to turn under a small hem on the mountain applique, more tricky shapes like the kanji character and the rice bowl were beyond me, so I bonded them and zigzagged the edge.  I did the same thing with the red flowers in the side borders.  There's a five yen coin next to the rice bowl, for good luck. 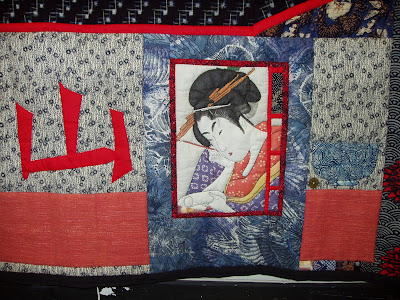 The narrow red strips for the 'screen' next to the woman were pieced.  The effect is not dissimilar to the shoji screen section in 'Kyoto Dreams' (below).  I wasn't going to write about that quilt here - I'll save that for another post - but the similarity just caught my eye.  'Kyoto Dreams' was made much later (2007 I think - all the dates were on the quilt labels) and I got the effect with Clover 'quick bias' tape.  And there isn't even anything in the background to match up, unlike the original 'Dream'.  The pose of the Utamaro bijin (beauty) is very close to the first one but this time I could needleturn well enough to be able to cut around features like her hairpins, just an eighth of an inch wide. 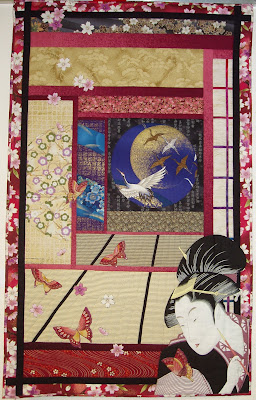