After a break of nearly two years on this project, when the patchwork and fabrics were usually several hundred miles apart, it's about time I got the patchwork finished. The centre of my quilt is on the left and the original is on the right.  I resized some elements to make better use of modern precuts, like 5in charm squares, so the Flying Geese border is larger and has eleven rather than fourteen units on each side.  I used squares on point rather than the double diamonds in the fifth border too and added a solid 1in border inside the first nine patch on point border. 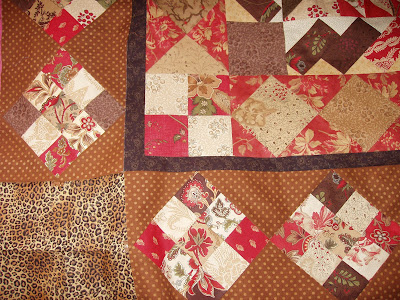 Initially, I wasn't going to make it as large as the original quilt at the V & A - 255 x 259cm (100 x 102in).  Now it looks like it is going to end up as my first king size bed quilt :-).  Once the second solid border is added, the quilt will measure 72in and 87 after the red zigzag border.  Resizing the second Flying Geese border to the same size as the first one (4in deep) adds another 8in, to 95in, and a second nine patch on point border adds 17in, making the total 112in before adding a plain outer border frame.  That's 4in wider than most wide quilt backings but not as wide as a king size wadding, so I won't need to seam that. 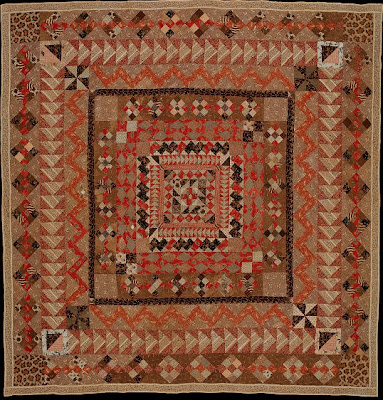 Both Flying Geese borders are made from only two fabrics in the original quilt, but I had already added more variety to the first one (see first photo), keeping the colours consistent but making each unit in a different fabric combination.  Maybe the second border should be all the same two fabrics?  I'm keeping to just two fabrics for the red zigzags.
Posted by Susan Briscoe at 12:33

Labels: medallion quilt, red and brown, V and A