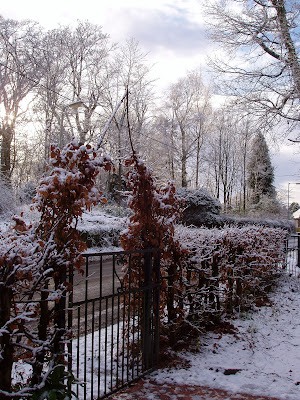 The wintry weather, the snow and high winds we've been having in the UK since Monday, has wreaked havoc with my talks schedule this week.  I've had to cancel two bookings - at the Glasgow Gathering of Quilters on Tuesday night and today, with Poppydown Quilters near Wootton Bassett - because I just couldn't get there.  After World Textile Day in Llanidloes last Saturday, we came back up to Kettins on Monday, driving in a blizzard most of the way up from the Scottish border (about half the journey), but there was too much snow for me to get out of the village by late afternoon on Tuesday.  It's not just getting there, it's the risk of getting stuck on the way home.  I've been a bit more cautious about snow since nearly getting stuck high up in the Yorkshire Wolds last year, after also coming close to being stranded near Bristol the year before.  So far, I haven't had to spend the night in a car that's rapidly getting buried in snow and I'd rather not start that kind of thing.

I started to wonder if I should have just stayed down in Brymbo, but that would have made little difference to the Poppydown quilt day, as the snow in Wrexham has been the worst spring snow for 30 years. It can get very deep there - I can recall 4 ft snow drifts against the back of my house in Wales, and that's probably what it's like now!  Yesterday, I was hearing from friends via Facebook and e mail that the main roads were closed due to abandoned cars and jacknifed lorries.  I hope this snow doesn't last much longer!  The photo below was taken in Brymbo a couple of years ago - the snow levels are light by the current standards. 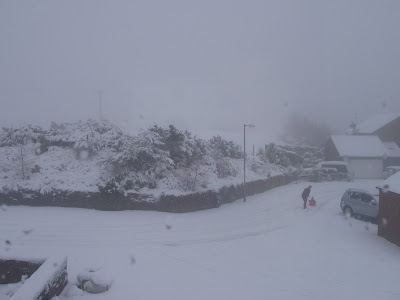 Since the UK seems to be getting a Winter that lasts 6 months these days, I'm wondering if I should stop taking bookings further afield during early Spring as well as January and February...!  I think we may have to invest in a second 4WD to cope with the weather.
Posted by Susan Briscoe at 18:55