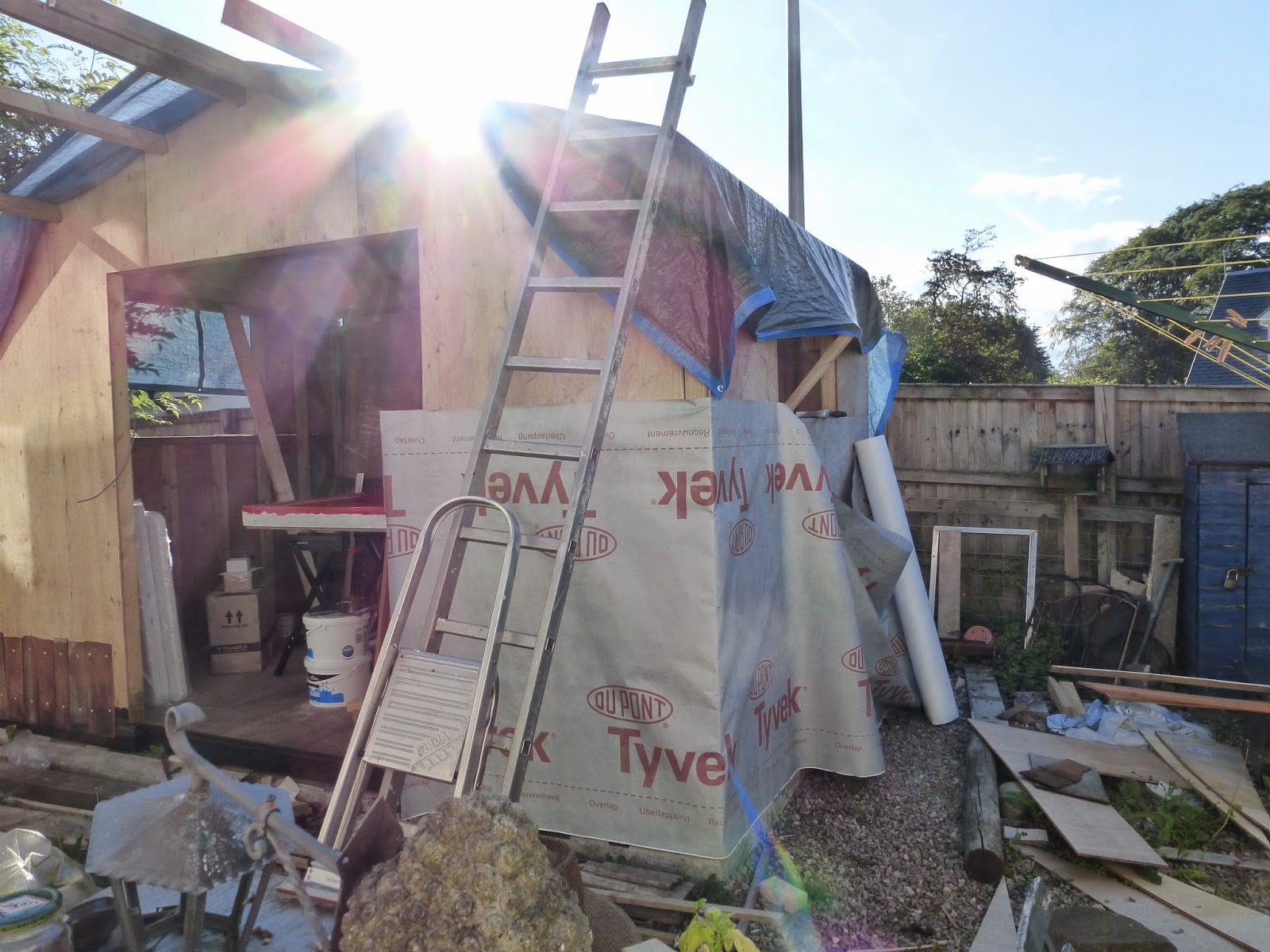 Yesterday evening we had the combination of enough time and good weather to get the first of the Tyvek house wrap onto the summerhouse. I chose Tyvek because it is microporus and will let the timber frame and pywood breathe - it lets out microscopic vapour molecules (small enough to pass through the meshed fibers but doesn't let water droplets through (too big). Yes, I know quilters are more likely to use Tyvek for painted and bubbled effects on art quilts! 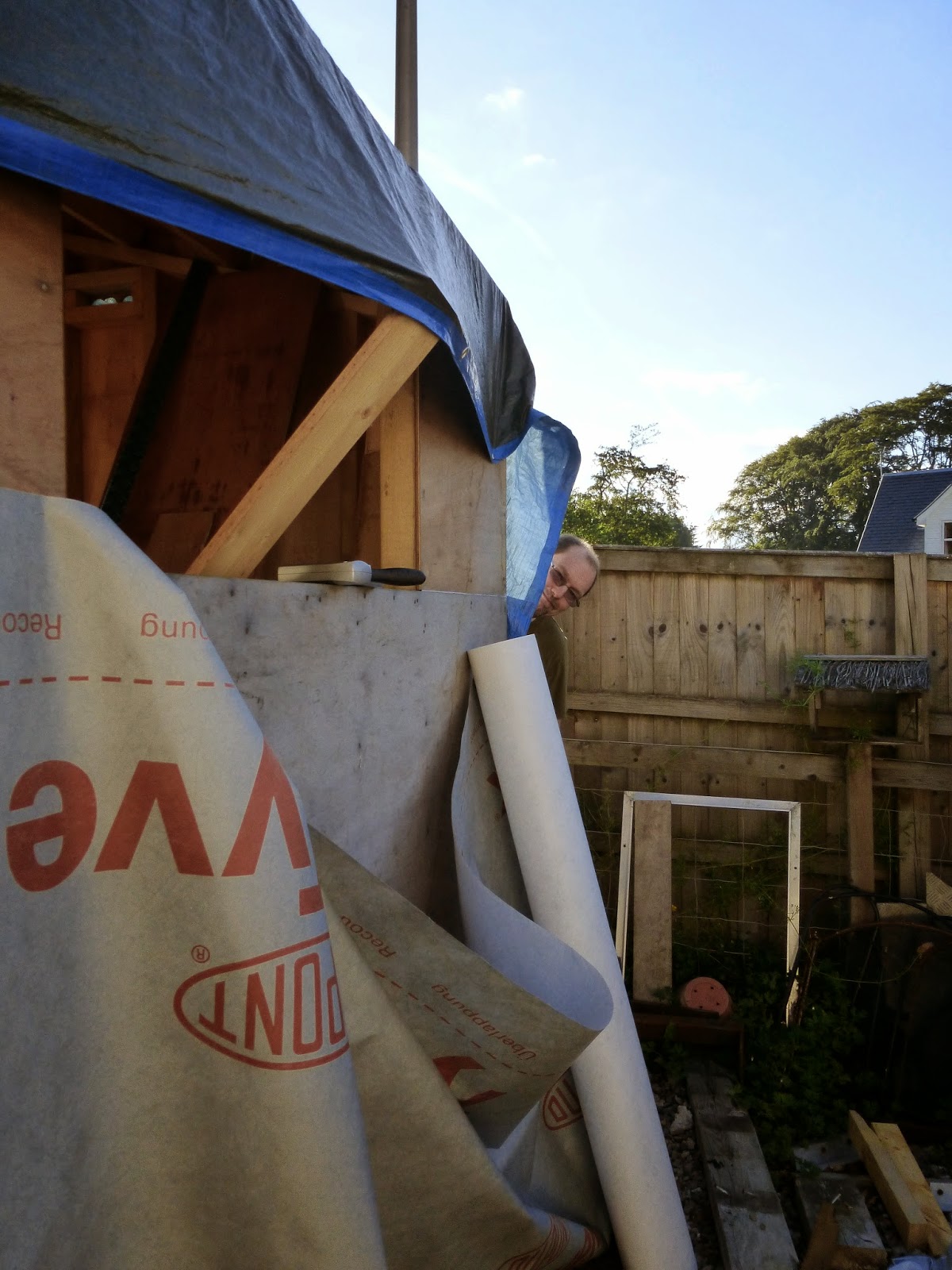 We studied a few clips on youtube before starting, although it turned out not to be easiest to go straight over the window openings in this instance.  Glyn did a tuck on each corner of the lower wrap, to allow for the extra bulk of the first row of shingles underneath, which were added to push out the angle at the bottom of the wall and throw rainwater away from the foundation slab. 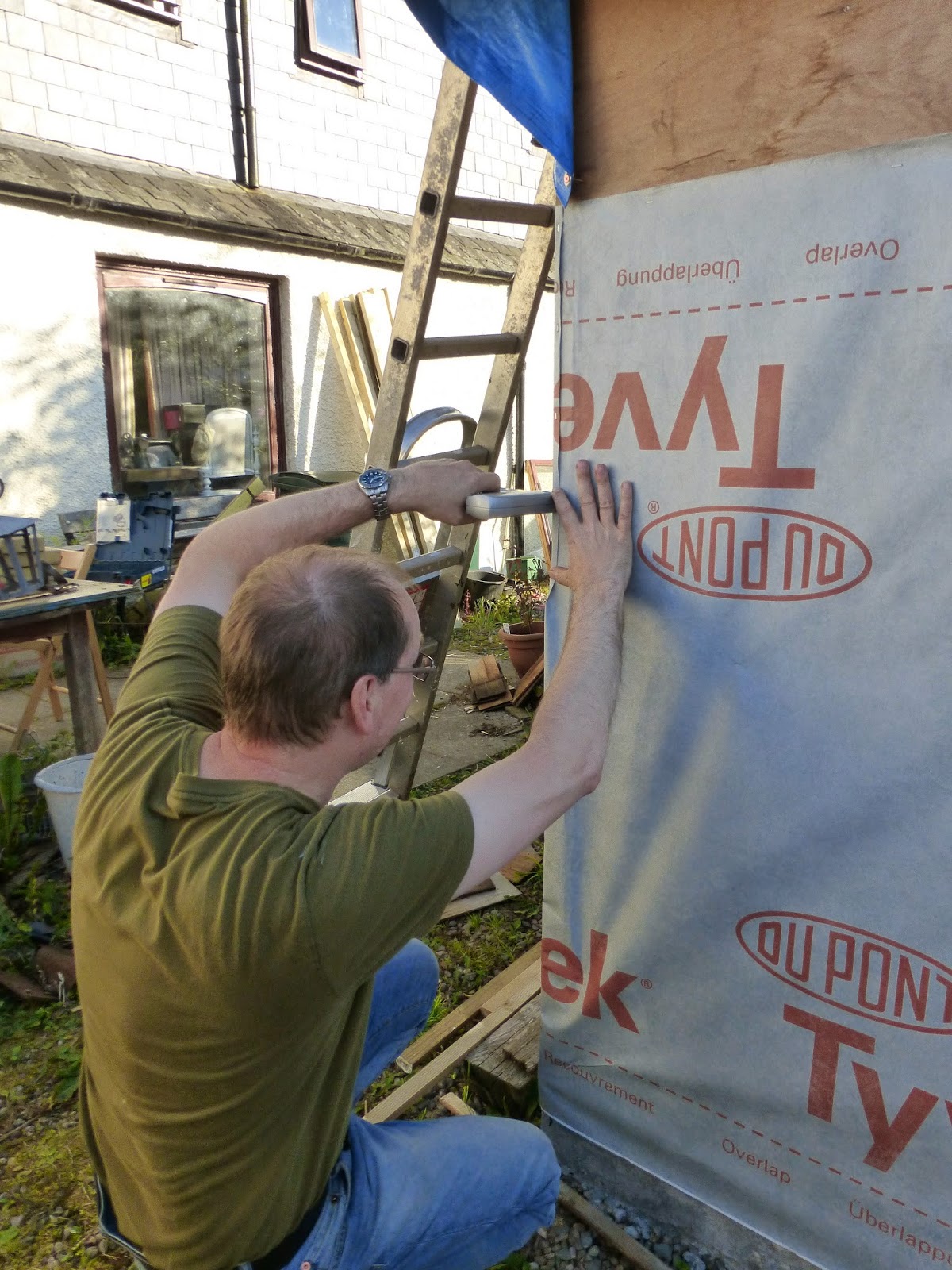 The ventillation grille openings were covered with fine flyscreen mesh (stainless steel) the previous day and the openings painted with bitumen paint. 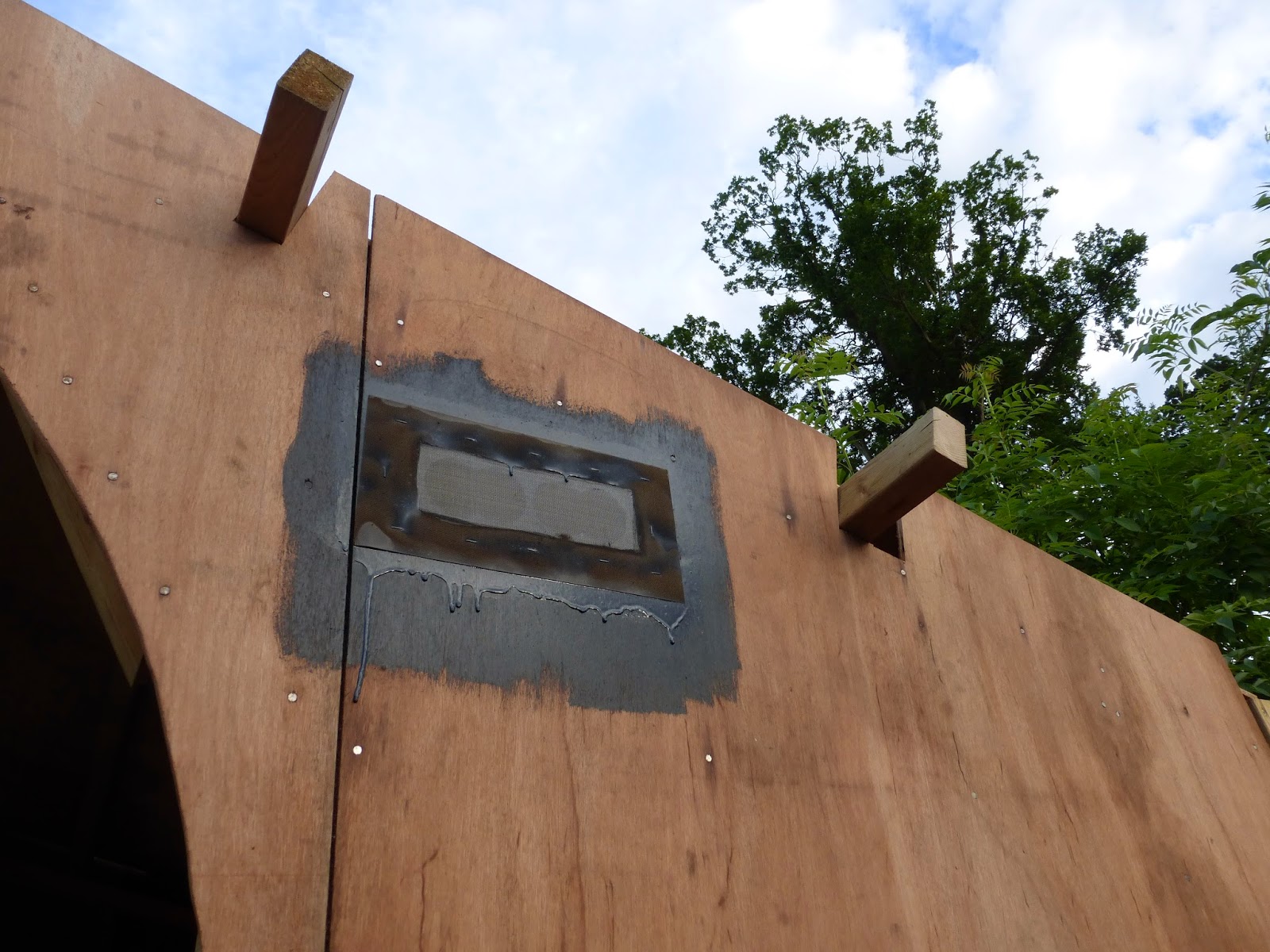 The wrap was definitely a two person job, although Glyn did the finishing off on the roof, with me holding the sheet up. 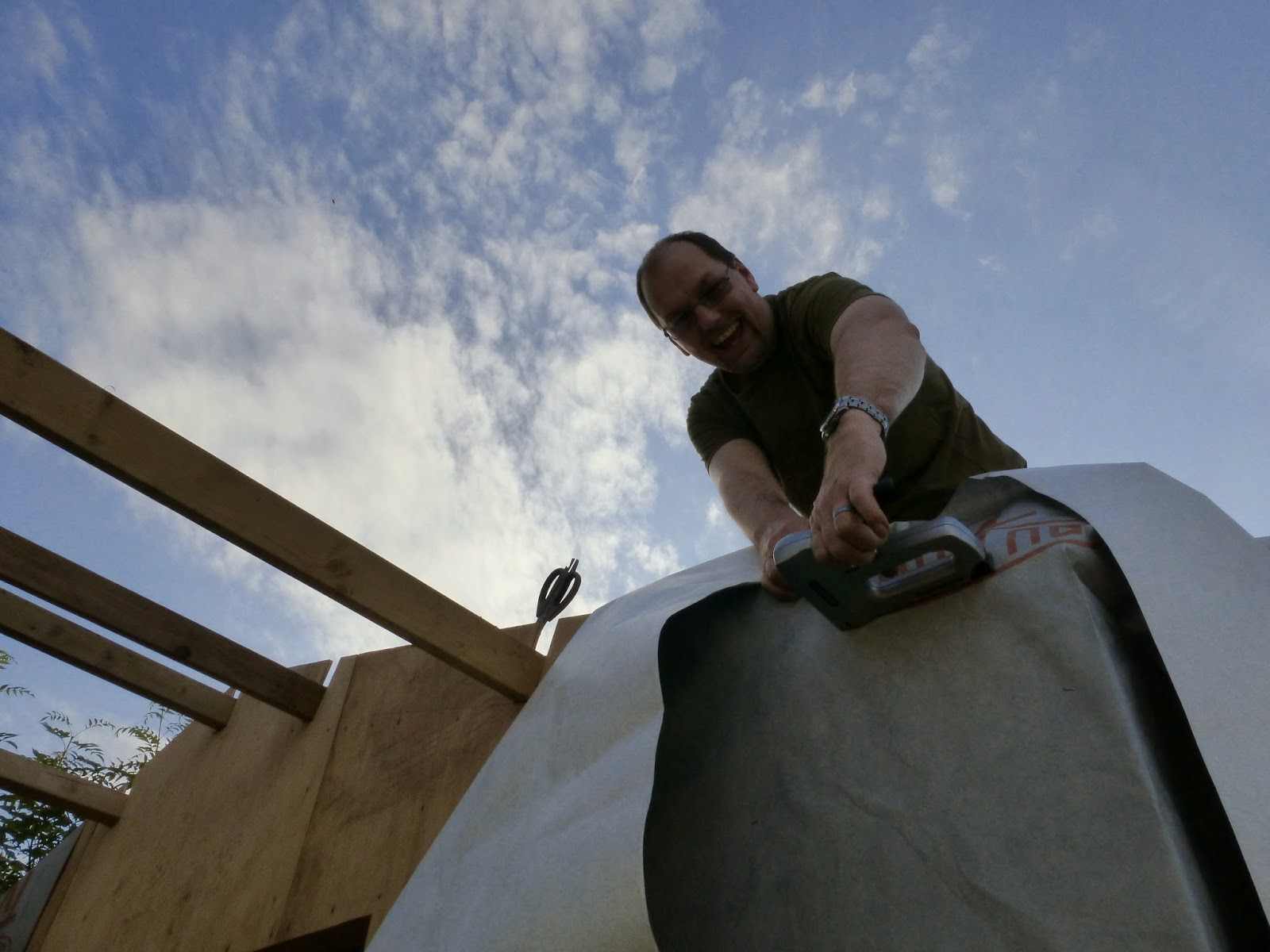 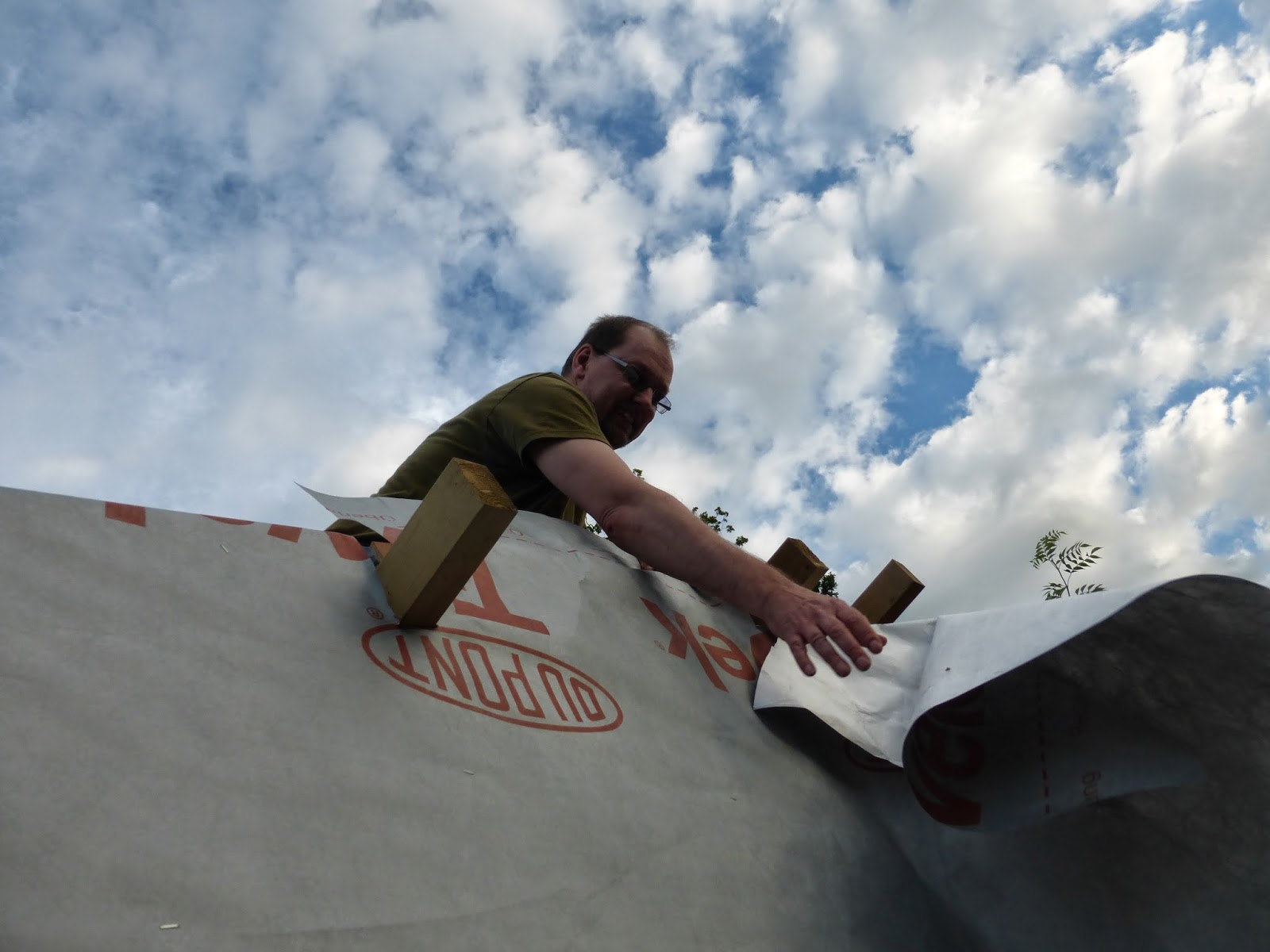 This is just before the tarp went back on last night.  We could have worked longer because it was still light, but this was about 9p.m. and the staple gun is quite noisy.  The Tyvek went on quite quickly and we'll finish it off on Saturday.  The roof insulation and roof panels will be next.  The metal primer arrived yesterday but we haven't measured for the roof just yet, so I don't know how much of the edge of each to prime for the copper hammerite paint I'm putting onto the underside of the roof overhang.  There's a bit more carpentry to do before that point as well. We're aiming to have the roof on sometime next week.  There was heavy rain a couple of days ago and a large damp patch appeared in the middle of the floor, right under the workmates.  The water had run down the underside of the plank we were using to hold the tarp away from the side window openings.  We're not going to install the side windows until we have almost finished the shingles, although the gothic window frame will go in soon, because they are already glazed and I think the vibration from hammering all the shingles could crack the glass.  The window architraves can be temporarily pinned in place, so we know what we are working up to with the shingles. 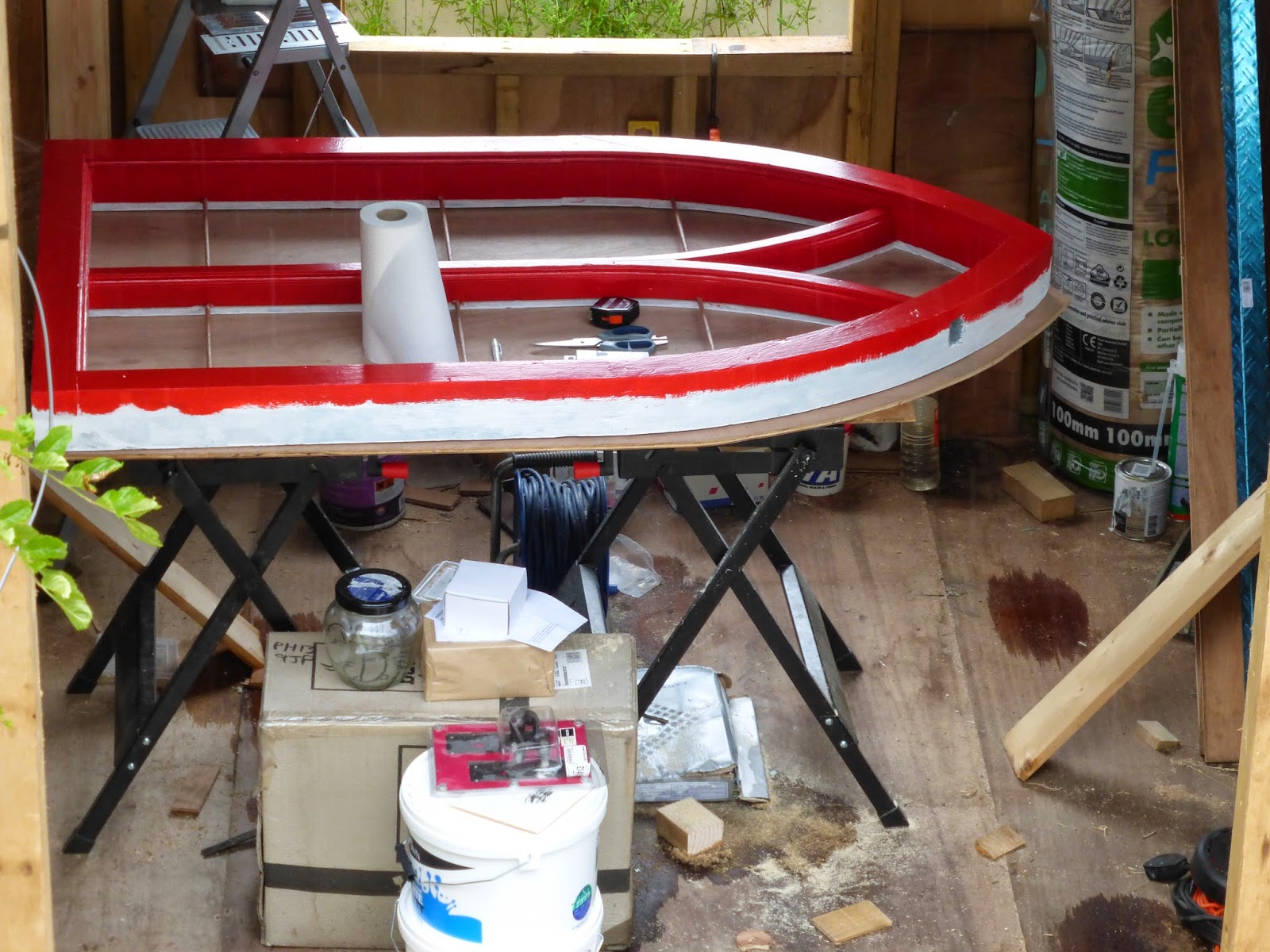